Indiscretion of an American Wife

A poor man's Brief Encounter, director Vittorio De Sica's Indiscretion of an American Wife blends Italian neorealism with Hollywood gloss to produce an uneven portrait of an illicit fling's final hours. Jennifer Jones and Montgomery Clift try their best to breathe life into the flimsy material, and their magnetism, combined with De Sica's artistry, makes this romantic drama worth watching. Kino's red-carpet Blu-ray presentation includes both the American and extended European versions of the film, both of which have been restored expressly for this release. The excellent transfers and solid audio enhance the impact of this troubled yet intriguing production. Recommended.

When you think of heartbreaking adulterous love stories set in a European train station, Brief Encounter immediately springs to mind. No doubt about it, director David Lean's tender, haunting depiction of a forbidden romance is a timeless classic. I wish I could say the same about Vittorio De Sica's Indiscretion of an American Wife, but despite fine performances and a hefty dose of neorealism, this Italian production featuring U.S. stars is little more than a second-rate knockoff. That's not entirely De Sica's fault (more on that below), yet despite its copycat nature, this uneven, often strangely fascinating film still draws us in and flaunts glimmers of brilliance that elevate its stature.

Indiscretion of an American Wife is really a tale of two films, two differing perspectives, and a culture clash that was never satisfactorily - or artistically - resolved. The unholy alliance between producer David O. Selznick of Gone with the Wind fame and De Sica, one of the darlings of Italian cinema who pioneered neorealism with such searing slice-of-life studies as Shoeshine and the Oscar-winning Bicycle Thieves, was formed to promote each man's personal agenda. Selznick sought a sophisticated European vehicle for his wife, actress Jennifer Jones, while De Sica hoped the film would provide a ticket to Hollywood and exposure to the kind of big-budget moviemaking that was impossible in post-World War II Italy.

Neither man ended up getting what he wanted. Selznick overhauled De Sica's original vision - a neorealistic look-in on the lives of several disparate people shuffling through the Rome train station on a single evening - by shifting the narrative focus to one dominant story complemented by dashes of local flavor. That tale would chronicle the final, fraught farewell between an adulterous American wife - played, of course, by Jones - and her Italian lover, played not by an authentic Italian actor, but rather by brooding American heartthrob Montgomery Clift.

Though Selznick didn't receive any screen credit, the megalomaniac producer "cosponsored" the film, and wielded his influence accordingly. Selznick was obsessed with his wife's screen image and didn't trust De Sica to present it to his liking, so he called in a special cameraman to shoot her close-ups, engaged up-and-coming writer Truman Capote to revise the dialogue, and - worst of all - re-edited the finished movie to a fare-thee-well for its American release. Selznick, much to De Sica's horror and fury, cut the director's 89-minute original version down to a mere 64 minutes! The shorn picture was so short, Selznick was forced to shoot an eight-minute musical prologue with singer Patti Page to pad the running time and make the movie marketable. He also changed the title from Terminal Station to the more titillating Indiscretion of an American Wife. 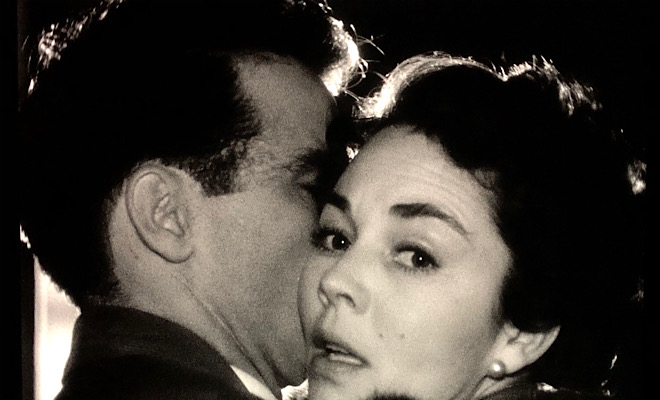 Selznick's meddling only further damaged an already imperfect project. Both films flopped, but Terminal Station, which was released in Europe and is included on this Kino Lorber Blu-ray release, remains the superior telling of a tortured tale of thwarted love. Though the added length doesn't provide additional plot, it fleshes out the sketchily-drawn leads, helping us better understand their motivations and actions. De Sica also has more time to immerse us in the claustrophobic setting (the station itself is really the third character in a lover's triangle) and develop a more sexually charged mood. Terminal Station may be a bit languorous and meandering, but it beats the choppy, disjointed feel that permeates - and sabotages - Indiscretion of an American Wife.

All of which begs the question... Why did Selznick feel so compelled to cut the film so severely? Did he not appreciate De Sica's artistry or understand his perspective? Or was he so driven by his own ego that he couldn't allow anyone else to have complete creative control? We'll never know the answers, of course, but like so many movies that were butchered for questionable reasons, Indiscretion of an American Wife became an unfortunate and unnecessary Hollywood casualty.

The simple plot follows the overwrought Mary Forbes (Jones) as she navigates Rome's central train station after impulsively deciding to break off her affair with Italian native Giovanni Doria (Clift). A restless wife and devoted mother to a seven-year-old daughter, Mary found love by chance while visiting her sister and teenage nephew Paul (Richard Beymer, billed here as Dick Beymer). The dark, dashing Giovanni awakened Mary's dormant passions and freed her pent-up emotions, but an overwhelming sense of guilt and duty tempers their romantic euphoria and drives Mary's decision to return home. Yet before Mary can board the train to Paris, an apoplectic Giovanni tracks her down and begs her to stay.

What follows is the agonizing push-pull between them, as the couple tries to come to terms with Mary's impending departure. As the minutes tick by, Mary and Giovanni hash out their relationship, steal moments of passion, and become consumed by emotional pain, all against the backdrop of the bustling terminal and society's judgmental glare. 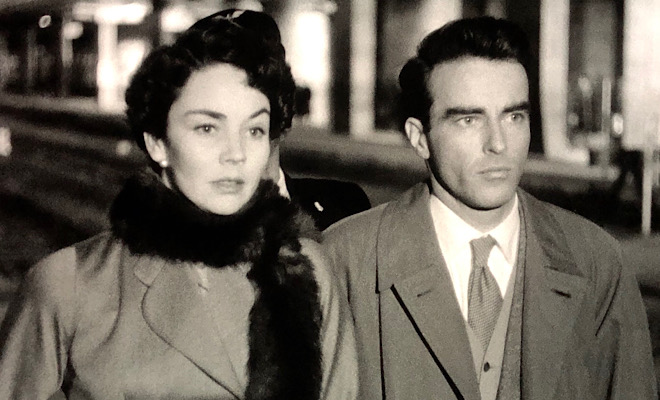 The film's best moments - reaction shots of real people (especially children) and indelible images of everyday life - showcase De Sica's strengths and remind us just how beautiful and affecting neorealism can be. They also make a strong case for De Sica's abandoned original vision, which would have highlighted these aspects even more. Still, the location shooting, several quirky slice-of-life bits, and De Sica's keen eye for atmospheric detail lend essential authenticity and a seductive artistry to this predictable, cliched tale.

Jones and Clift express plenty of emotion, angst, and desire, all captured in lush close-ups. (One of them eerily resembles - okay, copies - the iconic tight framing of Elizabeth Taylor's face in her classic love scene with Clift in George Stevens' A Place in the Sun, which unbelievably has never seen a Blu-ray release. How can a movie that won six Oscars still not be available on Blu-ray? Hopefully Kino can right this wrong in the near future.) Clift is a brilliant actor and he projects Giovanni's sullen, wounded nature with his patented understated intensity, but his Italian accent comes and goes and the sketchy script gives him little to work with.

Clift's expressive eyes always enhance his performances and make him a magnetic screen presence. He creates palpable chemistry with Jones, who reportedly developed quite a crush on the actor during shooting and exhibits a surprising degree of eroticism in their love scenes. Jones is one of those love-her-or-hate-her actresses; some find her whiny and insipid, but I've always appreciated the sincerity and warmth she brings to her portrayals. Here, she exudes a refreshing maturity, and though she may wring her hands a bit too much, she effectively projects her character's conflicted nature. She also works well with the 15-year-old Beymer, who in a few years would file affecting, career-defining performances in The Diary of Anne Frank and West Side Story. Indiscretion of an American Wife marks his film debut, and he comes off quite well as Mary's impressionable nephew.

Let's face it, with or without the cuts, Indiscretion of an American Wife would never be considered a great film. Its wispy story struggles to sustain both versions, but despite stringing out the narrative even further, De Sica's original Terminal Station offers more atmosphere, depth, nuance, character development, and good old Italian passion than Selznick's choppy, puzzling edit. It also more fully showcases De Sica's style and artistry. If you can concentrate more on the visuals and tender work of Jones and Clift than the hackneyed plot, both versions of Indiscretion of an American Wife can be enriching film experiences. They're even more fascinating if you watch them in succession. 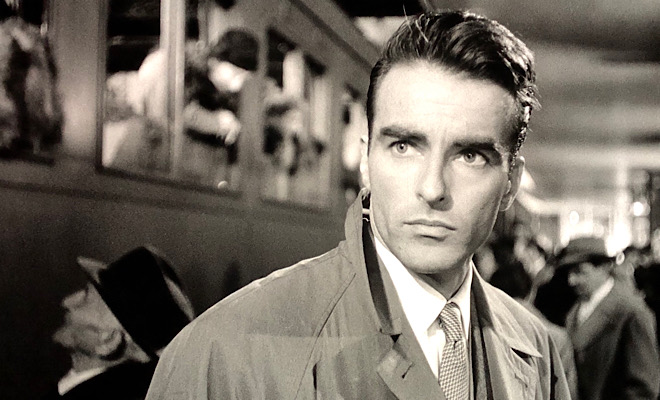 Indiscretion of an American Wife arrives on Blu-ray packaged in a standard case with reversible cover art. Terminal Station, the elongated original version of the film, is also included on the disc with both English and Italian soundtracks. Video codec for both films is 1080p/AVC MPEG-4 and audio is DTS-HD Master Audio 2.0 mono. Once the disc is inserted into the player, the static menu with music immediately pops up; no previews or promos precede it.

Both versions of the film received restorations "from the best surviving film elements" in advance of this Blu-ray release - 4K for Indiscretion of an American Wife and 2K for Terminal Station - and the resulting 1080p/AVC MPEG-4 transfers reflect the care that went into them. Not surprisingly, Indiscretion of an American Wife is the better of the two, boasting far better clarity and contrast, a much cleaner print, and an overall smoother presentation. Grain is noticeable but nicely resolveD, providing not only a pleasing film-like feel, but also essential texture that enhances the movie's realistic look. The shadowy cinematography by G.R. Aldo (who also shot Orson Welles' Othello) is distinguished by lush blacks and nicely varied grays that produce a balanced, attractive image with plenty of depth and contours. The patterns and fabrics of Jones' Oscar-nominated Christian Dior wardrobe are crisp, and close-ups highlight fine facial features well. Some faint and not-so-faint vertical lines occasionally plague the print, but nicks and specks are largely absent.

Terminal Station looks significantly rougher, which is not surprising considering it has not been protected over the years by a major studio. There's much more print damage (including a few large blotches), some image instability, and a slightly diffused appearance. It's obvious Terminal Station received far less TLC than its truncated American counterpart, which is a bit of a shame, because I feel it's the superior version. The transfer is still very watchable, just not as vibrant, sharp, or clean as Indiscretion of an American Wife.

The DTS-HD Master Audio 2.0 mono tracks for both versions provide clear, well-modulated sound. The romantic music score fills the room with ease, and a wide dynamic scale handles all of its highs and lows without any distortion. The subtle atmospherics of the train station come through cleanly and sonic accents like engine whistles and track rumbles are distinct and penetrating. All the dialogue is easy to comprehend, and no age-related hiss, pops, or crackle disrupt the story's intimate moments. The film's natural audio enhances this largely location-shot drama, and this high-quality track renders it well.

Kino provides all the extras necessary to present this troubled production in its most comprehensive form.

More Montgomery Clift on Blu-ray is always a good thing, and though Indiscretion of an American Wife is far from the actor's finest film, director Vittorio De Sica's delicate romantic drama about the demise of an illicit fling still merits attention. A combination of Italian neorealism and Hollywood gloss, the movie is often as troubled and aimless as its main characters, but Clift and co-star Jennifer Jones try their best to rise above the muddled material. Kino's red-carpet Blu-ray presentation includes both the American and European editions of the film, both of which have been restored expressly for this release, and the excellent transfers and solid audio heighten the impact of this intriguing trifle. Recommended.