Break out your whips, chains, nails, and puzzle boxes - Clive Barker's classic Hellraiser is back in print from Arrow Video! The film that introduced us to the iconic cuddle-averse Pinhead played by the ever amazing Doug Bradley is just as moody, atmospheric, and gloriously uncomfortable as ever. And it still looks amazing in this single-disc Blu-ray set. Recycling the same great video and audio transfer from 2016 as well as the terrific bonus features package - it's still the best 'ol Pinhead has looked or sounded on home video. If you missed the Scarlet Box or the SteelBook Arrow releases, you get a third chance to open the box - Highly Recommended

"We have such sights to show you!"

Lovable everyday demon Pinhead (Doug Bradley) is just trying to do the right thing - be he struggles with the deep dark evil inside himself. After his torture subject Frank (Oliver Smith/Sean Chapman) escaped his dominion of hell, Pinhead must find a way to retrieve his subject. Help isn't far when the beautiful Kirsty Cotton (Ashley Laurence) manages to solve the ancient puzzle box and summon Pinhead and his pain-prone friends Chatter (Nicholas Vince), Female (Grace Kirby), and Butterball (Simon Bamford) to stop Frank. But are they too late to save Kirsty and her father Larry (Andrew Robinson) from Frank and the diabolical Julia (Clare Higgins)? 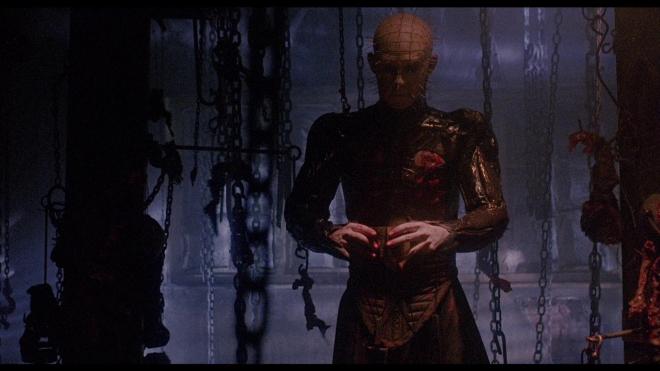 Obviously, the above synopsis isn't exactly what Hellraiser is about… I just wanted to see if I could make this grim and dark pain-focused horror film sound like a heartfelt family drama you just might see on the Hallmark Channel. Instead, Clive Barker's magnum opus is a dark fairytale where things aren't all sunshine and rainbows. It dives down to the depths of obsession and addiction and the effect on the family. At least that's certainly one way you can look at it. Hellraiser was a frequent movie of discussion in film school because it's stark imagery and themes could be remixed and interpreted in a wide variety of ways - depending on whether or not you relate to the material.

For my taste, the fact that you can take this film over another Clive Barker adaptation such as Rawhead Rex for example and be able to explore it intelligently is what makes it a terrific horror film. I've done my best with Barker's literary efforts, some are fairly straight forward… others are a bit out there for my sensibilities. Where I devoured Cabal - the basis for the excellent Nightbreed and The Forbidden which inspired the classic Candyman - I struggled with some of the stories found in his Books of Blood. Looking at some of the film adaptations that have come along since the first two Hellraiser films and Barker's last outing as a director Lord of Illusions, the track record is just as spotty. The iffy Hellraiser: Judgement and Midnight Meat Train just shows that not everything should be made into a movie - and then the right filmmaker needs to be in charge when said opportunities arise.

I wish Barker found his place back behind the camera again. He had a great eye and perhaps mainstream Hollywood wasn't the place for him. While I lament the move to streaming dominance, I feel like now is the right time for his return. The avenues for a series or a new movie based on his material actually directed by Barker are wide open. With so many platforms I feel like he'd be able to find his audience and produce content people are interested in. Supposedly a remake of Hellraiser is still in the works and I keep reading rumblings on a Nightbreed T.V. series but both have yet to materialize in any earnest way. At least we have a new Candyman movie coming - so that's something? Maybe? Regardless of reboots or relaunches or needless sequels, Hellraiser will always remain a genre-defining classic in my book.

Arrow Video opens the puzzle box one more time to unleash Hellraiser again on Blu-ray as it was previously released as part of the Scarlet Box Trilogy and a SteelBook that ween OOP very quickly. It's the same BD-50 disc as before, only this time it's housed in a standard clear plastic case with reversible artwork. The disc loads to a standard animated main menu with traditional navigation options. 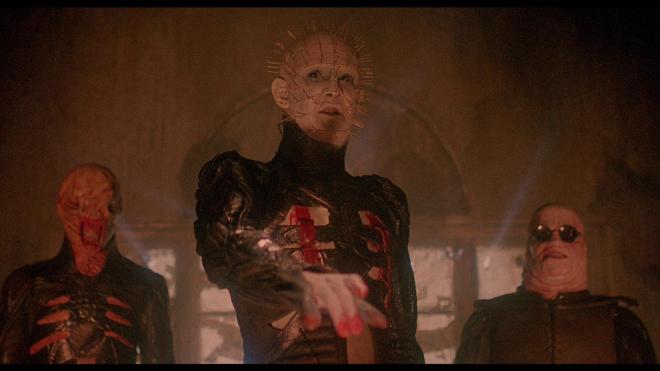 Back in 2016 -- sounds so long ago when you put it like that -- I was really impressed with the video transfer sourced from a fresh new 2K restoration. And I still am! I have fond memories of my first VHS tapes of this movie and eventual DVD and the first round of Blu-rays and this presentation still is a big highlight from Arrow's long list of excellent releases. While I would love to see what a new 4K scan or even a true UHD with HDR presentation could do for the colors and black levels - I'm still overjoyed the film looks as good as it does with such an impressive transfer.

Check out our Scarlet Box Trilogy Review for my full thoughts about this transfer and audio presentation. 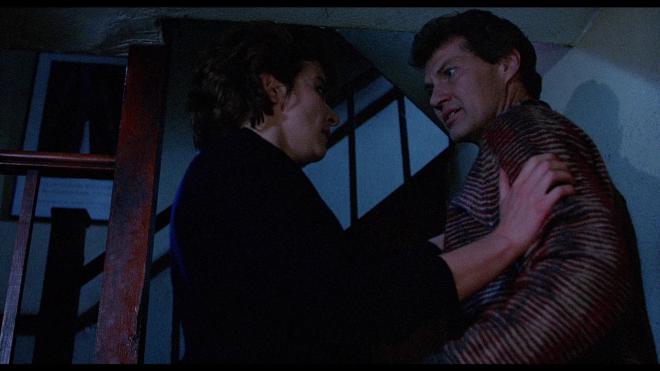 As with Hellraiser, we're given two solid audio mixes to work from here, a DTS-HD MA 5.1 surround track and a more traditional LPCM 2.0 mix. Again, I'm giving the edge to the LPCM 2.0 track as it sounds the most organic of the two. Frankly, when I first reviewed this disc I let my enthusiasm get the better of me with a full 5/5 score. Both tracks are fantastic, and the best the film has ever sounded, but the best of the best of any title out there? Maybe not, so I'm adjusting my score down a little for this to reflect that. The DTS surround mix is quite good - especially in the last act when everything literally goes to hell - but that 2.0 mix feels right. The lower LFE comes to the forefront allowing the amazing Christopher Young score to really come alive and maintain that encroaching atmosphere. Admittedly, this could well be my youthful memories of VHS and Laserdisc skewing my preferences. I just like the stereo mix for this more than any enhancement the surround track offered. 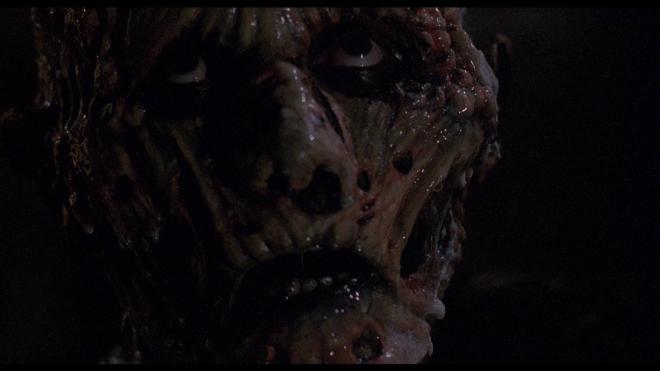 No new bonus features were commissioned for this disc - not to say that is a problem - there is SO much amazing content here from all of the audio commentaries to the incredible Leviathan: The Story of Hellraiser documentary that you have several hours worth of material to pick through! 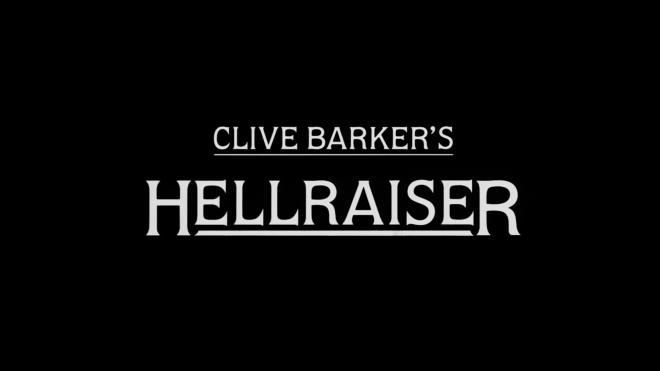 Hellraiser is a moody and broody classic horror film. Considering the terrible adaptations of Barker's work that preceded it, we're kinda lucky we got this movie at all! With so many churn and burn direct to video sequels, this original film's reputation remains strong. There have been countless imitators over the years, but only one got it right the first time. I wish Barker was still actively making movies, but at least the few he did direct himself still hold up.

If you missed out on Arrow Video's The Scarlet Box Trilogy or the standalone SteelBook release, now's your chance to pick up the best release of Hellraiser available. Featuring a fantastic A/V presentation with hours of extras, it may not be as complete a package as The Scarlet Box, but it's still an incredible release just the same. Highly Recommended.

Sale Price 27.39
List Price 39.95
Buy Now
3rd Party 29.94
In Stock.
See what people are saying about this story or others
See Comments in Forum
Previous Next
Pre-Orders
Tomorrow's latest releases