Private detective Harry D'Amour (Bakula) stumbles onto dark doings involving a famous magician, Philip Swann (O'Connor), and his gorgeous wife Dorothea (Janssen). D'Amour thinks that Swann could be involved in the death of a tarot reader and former cult member, and as he investigates he is plunged further into a world of occult mystery.

'Lord of Illusions' may not exactly deliver on the magical, supernatural spectacle its title promises, but it somehow manages to entertain with an intriguing and original concept that also plays to a viewer's love of cinema. That love is not very obvious at the start, because it opens like a standard horror flick, a prologue that shows two rivaling cults of the black arts duking it out with one faction invading the other to save a little girl meant for ritual sacrifice. The brief preface to a larger mystery, although it really isn't since it's telling audiences everything, teases on the visual possibilities with Daniel von Bargen as cult leader of the baddies Nix playing with a ball of fire and has a wizard fight against his former second-in-command Swann (Kevin J. O'Connor). Afterwards, when the story jumps thirteen years later, it immediately becomes apparent what maestro of the grotesquely macabre Clive Barker actually has in store for viewers.

At the heart of this mostly-forgotten horror gem, which I remember left theaters almost as quickly as it hit, is a clever homage to film-noir, particularly that of the disgruntled, terribly reluctant-hero detective variety. Scott Bakula plays the sullen, hard-boiled private eye Harry D'Amour, which by the way is a fantastic name for this type of character. He's a drunkard with the world's largest chip on his shoulder, because it seems every case he takes is always conveniently involved with the occult, meaning he has some supernatural calling and talent for it. Nicely chewing up the scenery, his own take of the Humphrey Bogart P.I. sort, Bakula is great in the role of a man who doesn't possess the emotional mental space for romance or dealing with the dark side of humanity. However, the actor sadly fails to shake off the ghost of Sam Beckett from 'Quantum Leap.' At times, I expected the hologram of Dean Stockwell to suddenly appear with some helpful advice. 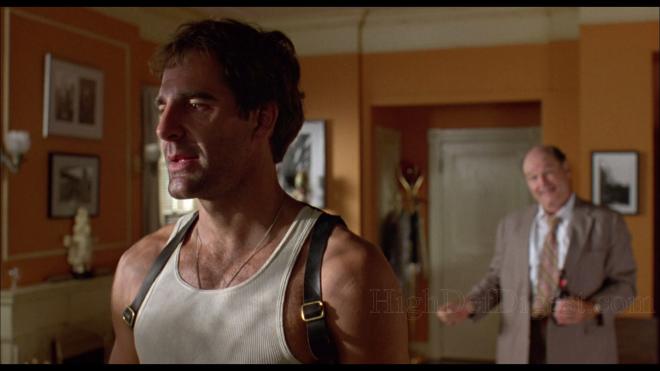 Playing the Lauren Bacall type to Bakula's Bogart is a very young Famke Janssen, who surprisingly does fantastic as seductively mysterious femme fatale Dorothea Swann. She's no Barbara Stanwyck or Lana Turner, missing that quality which would make the character both irresistibly bewitching and darkly suspicious, as if capable of ruthlessly manipulative games that would have men eating out of her palms. That's not to say her motives are never questioned because they are on several occasions. But as the wife of Swann, who since the prologue has gone on to become a renowned stage illusionist, it doesn't take long to figure out why she's so secretive. Besides, her stock characterization is also somewhat ruined when the filmmakers decide to turn her into the typical damsel in distress, requiring Bakula's machismo to save the day because her wimpy husband's masculinity is apparently all tricks and hallucinations.

Nevertheless, 'Lord of Illusions' manages to entertain with its aspirations for film-noir archetypes set to the horror genre and a story that amusingly allows for the mix to work a majority of the time. Released during a rather interesting time when horror filmmakers pushed for more original yet stranger material — from the late 80s to about the mid-90s — Clive Barker demonstrates his skills behind the camera are on par with his darkly-twisted talent for the written word. Adapted from his own short story that first introduced the Harry D'Amour character, the famed author does better here than in his 'Nightbreed' where there is less emphasis on the special effects and make-up, which are great though haven't aged very well, and more on story. He borrows the feel of classic crime films without ever actually imitating a specific one, making it a cult feature that may lack in certain areas but still satisfies with its love of cinema and its magic.

Shout! Factory brings 'Lord of Illusions' to Blu-ray as a two-disc Collector's Edition under the distributor's Scream Factory line. Both are Region A locked, BD50 discs on opposing panels and housed inside a blue, eco-elite case with reversible cover art and cardboard slipcover. At startup, viewers are taken to a menu screen with music and full-motion clips. The first disc contains the original 109-min theatrical version while the second comes with the 121-min Director's Cut, which shows more dialogue, character conversations that add to the film-noir feel and more gore.

The illusion is unveiled and unmasked thanks to an amazingly great-looking 1080p/AVC MPEG-4 encode (1.85:1) that blows previous releases off the stage. Of course, a few negligible, almost easy to miss bits of dirt and black spots occasionally make an appearance, reminding viewers the source has aged and isn't completely up to snuff. But for the most part, the elements are in very good condition, revealing lots of sharp details in the faces of the cast, surrounding foliage and clothing. Some sequences, especially the early CG visual effects, are poorly resolved and on the blurry side. Contrast and brightness levels are well-balanced with deep blacks and strong shadow delineation. Colors are accurate and cleanly-rendered with primaries looking particularly bold.

This release continues to amaze and astound with a fantastic DTS-HD Master Audio soundtrack that's entertainingly engaging. Lots of small discrete effects, like the echo of voices and the sounds of city traffic, bounce between the three front channels convincingly, creating a broad and active front soundstage. The captivating music of Simon Boswell also participates to broaden and expand imaging, exhibiting excellent separation and detailed clarity in the mid-range. Dialogue and whispered conversations are intelligible and precise in the center while a healthy low-end provides adequate weight and presence not only to the score but also to the few action sequences.  The rears are continuously employed to deliver subtle atmospherics, creating a satisfyingly immersive soundfield.

Clive Barker's 'Lord of Illusions' may not exactly deliver on the magical, supernatural spectacle its title promises, but it somehow manages to entertain with an intriguing and original concept that also plays to a viewer's love of cinema. Starring Scott Bakula and Famke Janssen, the film is an amusing and mildly successful marriage of horror and film-noir. The Blu-ray arrives with a fantastic audio and video presentation that improves on previous home video editions. With a mostly good supplemental assortment, the overall package will make fans very happy.

Sale Price 129.99
Buy Now
3rd Party 79.95
In Stock.
See what people are saying about this story or others
See Comments in Forum
Previous Next
Pre-Orders
Tomorrow's latest releases