James Stewart and Anthony Mann team up once again for a gorgeous western in The Far Country. Co-starring Ruth Roman, Walter Brennan, John Mcintire, as well as a host of genre familiars - a simple by the numbers story comes to life with terrific performances and gorgeous on-location photography. Arrow delivers The Far Country to Blu-ray with a solid A/V presentation preserving both original aspect ratio presentations along with a host of new bonus features to pick through. For another great western in the collection - The Far Country is your destination. Highly Recommended.

Jeff Webster (James Stewart) just wants to sell his cattle for a fair price and stake a gold claim in Dawson to double his profits. With some help from his old pal Ben (Walter Brennan), he just wants to be left alone and go about his own business. Don't bother anyone and no one will bother you. But local law and territory heavy Gannon (John McIntire) likes to have at least one finger in every pie. If he isn't charging you on your way into the Yukon - he's sticking you when you get there - and that's just something Jeff can't abide. When the two men lock horns, the future of Dawson is caught in their war of wills. 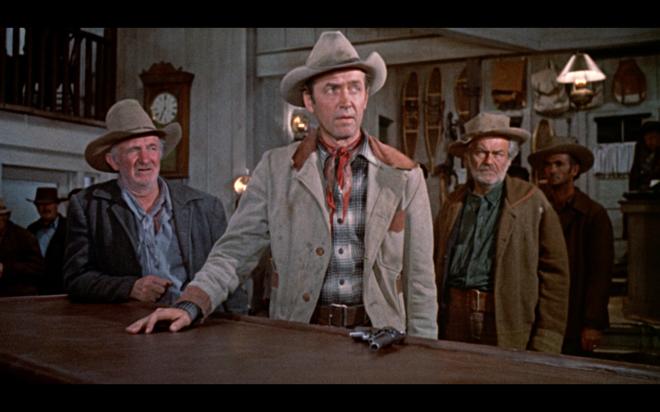 Between The Naked Spur, The Man From Laramie, The Man Who Shot Liberty Valance - you'd think one would get used to seeing James Stewart playing it tough in some of the finest westerns ever entered in the genre. I love these films, but every time I see Stewart saddle up it always takes me a few moments to take the man seriously as a slinging six-shooter tough guy. But a few minutes in and I'm fully on board. That's the case here with The Far Country. When you first see Stewart stair-down two men while holding a pair of pistols on them, you have to chuckle a bit, but as the show progresses Stewart amiably slides into the gruff and tough Jeff Webster.

As far as plot and story are concerned, The Far Country doesn't really do much different than any number of other westerns. An honest man who wants to be left alone is compelled to step into a fight to stop the town tough. While familiar, The Far Country feels different because of the location. Setting the stage in the Yukon during the Dawson gold rush, the film feels more akin to a frontier film like Drums Along the Mohawk than a traditional dusty desert western. The location shooting in Alberta, Canada adds an edge of wild to the wilderness and the snow-capped mountains put a chill in your bones.

It's on this front that I have a special place for The Far Country. For several outings over the last twenty years or so my family has made trips out to Alberta to hike those gorgeous mountains. Spending time in Banff and Yoho - you eventually make your way up to Jasper where this film was shot. It's still gorgeous and those mountain ridges so unique it took me mere seconds to recognize where this was filmed. I've hiked that glacier during the opening credits! I don't know if anyone else experiences the same sense of nostalgia as I do when you spot a location you know in a movie you're really enjoying, but when the movie is good, it feels extra special to say you've occupied that same space at some point in time.

Even without any doubt about where the film was going and who was going to turn out on top, I really had a great time with The Far Country. John McIntire makes for a terrific heavy as Ruth Roman aims to be the seductive lady of mystery while Walter Brennan continues to play the lovable buddy to our hero. On top of our primary cast, this film is filled with familiar genre faces including Harry Morgan, Jay C. Flippen, Roberty Wilke, Royal Dano, and the man you can spot a mile off just by his eyes - Jack Elam! While small parts, they all get a moment to shine and steal the show.

Ever since I was a kid I've been a sucker for westerns. Growing up on a steady diet of Clint Eastwood with a side of The Duke will do that to a boy. As Arrow, Kino, and other niche studios pick up the studio slack and bring these films to Blu-ray, I'm occasionally blessed with the opportunity to discover a new favorite. The Far Country is a new favorite for the collection. The Man From Laramie is still probably the best of the Anthony Mann/James Stewart westerns but this one is a close contender for second with The Naked Spur.

Arrow Academy delivers The Far Country to Blu-ray in a two-disc set. Each presentation of the film, 1.85:1 and 2.00:1 occupies their own Region A BD-50 disc. The discs are housed in Arrow's standard two-disc clear cases with classic reversible insert art and identical slipcover artwork. The discs load to identical animated main menus with traditional navigation options. All bonus features are found on Disc One with the 1.85:1 transfer. 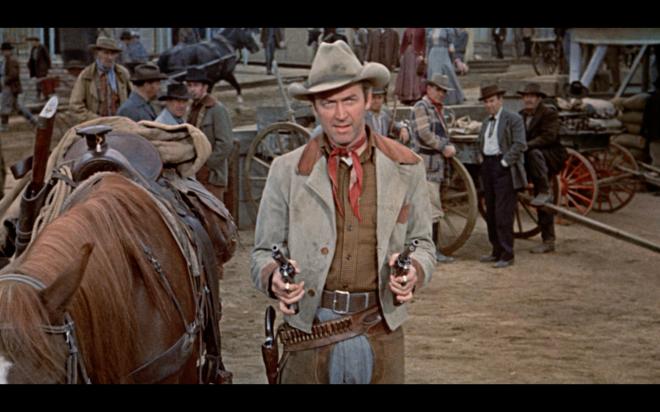 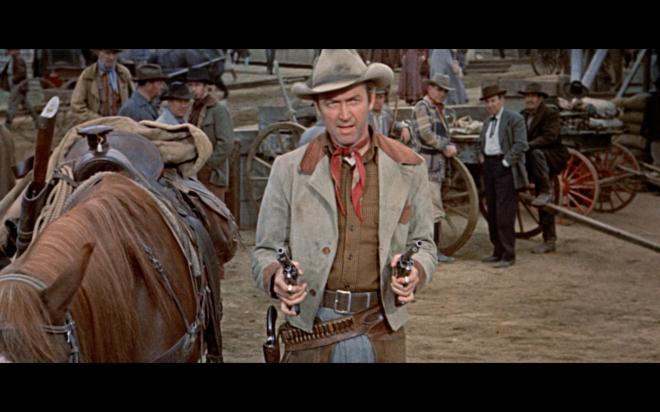 According to the insert booklet, The Far Country was sourced from a new 4K scan. Shooting location limitations, age, and cinematographic processes limit the range of this film, but both the 1.85:1 and 2.00:1 transfers are pretty damn gorgeous at times. Some cooked in softness is a persistent companion to this film - namely in wide establishing shots. However, when the camera moves in a bit closer the image gains much more detail clarity and allows for the impressive production design and costuming - as well as the locations - to come to life. Stretches surrounding optical transitions showcase the telltale signs of an impending scene transition with softer details and altered colors - but these technical limitations really are the only issues with these transfers. Speckling isn't an issue, colors are bold, film grain is present and natural. Black levels can waver slightly for some sequences but are overall satisfactory.

Between the 1.85:1 or the 2.00:1 transfer - that's dealers choice. Both transfers are essentially identical with framing the only difference. Because I like to see the peaks of these mountains and the sense of verticle scale they offer - I lean towards the 1.85:1. However - at the same time the 2.00:1 communicates a wide vista of an unpopulated wilderness. Try both, watch the one you like the best. They're both equally beautiful. 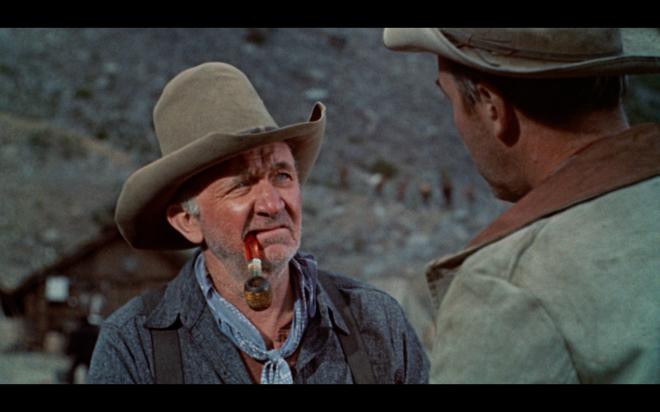 Both presentations of The Far County come packed with solid LPCM Mono audio tracks. For the most part, the mix is great allowing for busy bars and dining halls to fill the scene with packed people - or let the quiet rugged wilderness add a little extra atmosphere. Dialog is clean and clear throughout, scoring, and sound effects occupy equal spacing and provide a well-balanced soundscape. Occasionally the mix can sound a little flat - some of the sound effects can feel a little canned in places but those are usually limited to moments with a lot of edits and rapid action. Free of any hiss, pops, or other age-related issues, this mix is clean, balanced nicely and sounds great.

The Far Country may not tell a new story - but it tells it in an untamed and new place. The rough mountainous Canadian location gives the colorful characters a few extra shades to play with lending a sense of authenticity to the show instead of being another familiar Hollywood backlot project. James Stewart and his fellow cast members play their roles perfectly with director Anthony Mann delivering drama and excitement that rises above the sense of familiarity to create a wild adventure.

The Far Country arrives on Blu-ray thanks to Arrow Academy in a splendid two-disc set. We're given both the 1.85:1 and 2.00:1 presentations with an excellent video transfer and a strong mono audio mix to match. Pick your preferred aspect ratio and you'll be all set. Bonus features may not be plentiful, but they're Arrows typical high-caliber quality and informative. Highly Recommended.