The Man from Laramie

A stranger defies the local cattle baron and his sadistic son by working for one of his oldest rivals.

As a fellow man from Laramie, Jimmy Stewart's 1955 Western, 'The Man From Laramie,' has always evoked a certain sense of geographical familiarity, even though not a single scene takes place in the titular town. Instead, Stewart's dark revenge Western with Shakespearean levels of familial drama unfolds entirely in the small town of Coronado, New Mexico, a place where one man's wealth and power are so great he talks like he owns it. And, as with most small towns like that, Coronado is just waiting for some familiar genre tropes to come in and stir up a whole mess of trouble, as only a revenge-minded Western can.

The film was the fifth and final time Stewart teamed up with director Anthony Mann, and, perhaps due in part to the unique complexity of its characters and their various quarrels with one another, it would be one the collaboration's most memorable. Much of that intricacy came from the film's screenplay by Philip Yordan and Frank Burt that layered the hardship of the West with difficult relationships full on the pangs of birthright and the division of patriarchal affection between two men. That familial triangle found Alec Waggoman (Donald Crisp), as the self-proclaimed patriarch of Coronado, caught between honoring his legacy by passing his vast ranch – complete with the wealth and power it provided – to his churlish, incompetent, violent son Dave (Alex Nicol) and Vic (Arthur Kennedy), the man who would have been the clear heir, had he and Alec actually shared any blood.

Blood is a common theme running through 'The Man From Laramie,' and not just the kind that gets spilled. The movie examines the kind of relationships people have between one another that build on the concept of obligation, or an unspoken (though not entirely) vow brought about through parental or sibling duty. Alec knows that his time is short, he is losing his vision and his legacy is on the line. As such, he's torn between two sons, one that tradition tells him he has a posthumous responsibility toward because of what flows through their veins, and one who earned the respect of his elder through years of sacrifice, and blood, sweat, and tears. 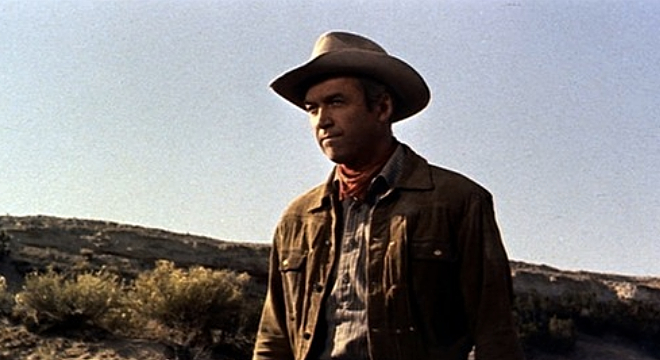 But blood is also what brings Jimmy Stewart's Will Lockhart to New Mexico in the first place. He may enter town under the pretence of bringing supplies to Coronado's general store – run by Alec's niece Barbara (Cahty O'Donnell) – but the stern, plain-speaking, tough-as-nails Lockhart is scouring the South West in search of the person or persons responsible for outfitting a group of Apache warriors with repeater rifles, making his brother and the rest of his cavalry patrol easy targets. Such responsibility is the kind that's owed between siblings, and goes unspoken until the obligation is engaged, setting the plot in motion.

And yet, despite the genre conventions inherent in the film's conceit, 'The Man From Laramie' doesn't play out so expectedly. Lockhart's quest for vengeance is ostensibly stymied the second he ventures into Coronado by his violent run-in with the loutish Dave, who drags him through a fire, shoots his mules, and burns his wagons. At that point, the search for his brother's killers takes a backseat to settling his score with Dave and, by extension, Alec Waggoman and Vic. Will channels his anger toward the most powerful men in town, and in doing so becomes a point of interest for Kate Canaday (Aline MacMahon), an aging rancher who is all too eager to have someone of Will's fortitude finally stand up to Waggoman and his seemingly nasty family.

That would be the kind of set up for a classic Western showdown: One lone man against the entrenched power of a small town. But Mann's more interested in the various dynamics of the key relationships at play than whether or not Will is going to be forced to shoot his way out of Cornonado. And while the film stars Stewart, the contributions of Crisp and his depiction of Alec Waggoman's internal conflict and the waning hopes that he will one day see his son become the man his name intended lends the story an involvedness that is unafraid to turn what would otherwise be the villain into a man whose plight is understandable, even if it isn't pitiable.

Still, Stewart is fascinating to watch as he walks a fine line between stubborn determination and wistful weariness. Will Lockhart is a man who feels the full weight of obligation and Stewart's performance conveys that sentiment as a burden, rather than a driving impulse. He speaks frequently of Laramie and of returning there – even though he's caught the eye of Barbara and earned the respect of Barbara – as though this excursion to New Mexico was a debt he owed, and once it was paid in full, he could, at long last, find rest.

'The Man From Laramie' is Mann's vision of the West, as a vast – as made apparent by the exquisite cinematography of Charles Lange – and unforgiving place where freedom is abundant and the only law that means anything stems from the contract one man has to another, often times drawn in blood. 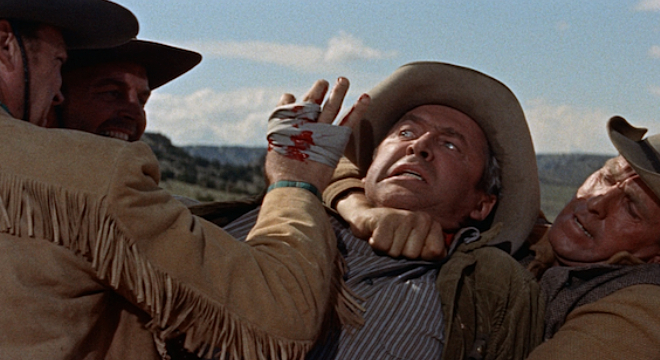 'The Man From Laramie' comes from Twilight Time as a single 50GB Blu-ray disc on the standard keepcase. Along with some stunning cover art, a booklet featuring an essay by film critic and historian Julie Kirgo accompanies the disc.

'The Man From Laramie' has been given a new 4K transfer, remastered from the original negative that presents the film in its 2.55:1 aspect ratio. This ultra-wide CinemaScope is an impressive sight, as the New Mexican vistas and wide-open landscapes roll past the camera in brilliant color and detail. In fact the establishing shots are easily the best thing the transfer has to offer visually.

While many other shots do look good as well, and feature some nice detail, color, and texture, there are enough instances where the frame jumps from a slightly green-looking image to that of the more pristine remastered version that it can be a little disheartening and distracting, much like the grain. The issue of the grain, however, is a matter of how present it is and how much it distracts from the level of fine detail that's available in any given scene. For the most part, grain is nominal and actually gives the film a nice aged quality that enhances the viewing experience. And yet other times, the grain is accompanied by slightly muted colors and a noticeable decrease in detail that results in a rough transition at times.

This is mostly a case of the good outweighing the bad, as although the transfer can be clunky or uneven at times, the moments when it shines look terrific. Many of the issues are likely to be related to the original negative and likely aren't the cause of any negligence on behalf of the restoration or transfer process, so even though 'The Man From Laramie' may raise an eyebrow from time to time, the overall result should please most fans.

The film has been given a DTS-HD Master Audio 5.1 mix that delivers a gorgeous sounding score and some surprisingly full-bodied sound effects, but can sometimes drop the ball when it comes to balancing the other elements with the dialogue – or in delivering the dialogue at level where it is heard easily and cleanly.

Much of the dialogue is delivered through the center channel speaker, though sometimes during the dust ups and other busier moments it can move around the channels. Sound effects and the score are loaded through the front channels, while smaller background elements – though they are few – can sometimes be heard in the rear channels. Altogether, the various bits can create a pleasant, though, never quite compelling mix.

The score during certain scenes – especially toward the film's climax – becomes the show-stopping element of the mix that elevates it above being merely average. The front channels deliver clear and precise instruments that create a very specific, clear cinematic experience. Gun shots and punches also land with a resounding bang or thud, and help make this a dynamic listening experience.

'The Man From Laramie' is a thrilling revenge Western that may be one of the best in the genre, and is certainly a terrific piece of entertainment from Jimmy Stewart and Anthony Mann. The film plays with the story of King Lear quite well, and even manages to make some unexpected moves within that particular framework. The image is good despite some inconsistencies and although the sound doesn't balance the dialogue as well as it could have, the mix still delivers robust, action-oriented audio. This one come recommended.