Pack your bags and travel with your loved ones and friends on a multi-week journey to Sweden, where you'll stay in one of the most beautiful locations on Earth and meet tons of new, cordial people of a different culture. Oh yes, the fine print is that you'll take an active part in a sadistic pagan ritual over the course of a few days where your life might be at stake. Welcome to Midsommar. This Blu-ray from Lionsgate/A24 comes with outstanding video and audio arrangements, and only a couple of bonus features. Highly Recommended! 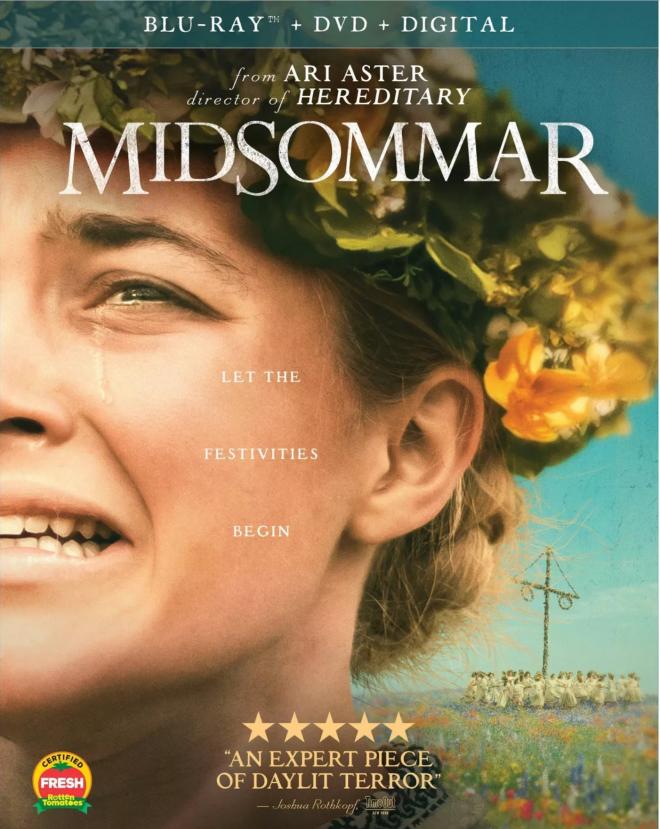 Perhaps one of the most sadistic and darkly funny relationship movies ever made is Ari Aster's (Hereditary) second feature film titled Midsommar, which is sure to leave you in a state of shock as the credits roll. If Hereditary tackled the paranormal within a generational family of horror, then Midsommar takes you on a chaotic rollercoaster of a couple's vacation overseas. This is nothing short of spectacular on every level and just like Aster's previous film, there are many things to take notice in the background due to his explicit attention to detail and filmmaking. Ari definitely knocked it out of the park once again.

One thing you must know when going into Midsommar is that you shouldn't expect something as scary as Hereditary. That film was a slow burn of a demonic value that had otherworldly entities at play there. That's not Midsommar. This particular movie feels very realistic and even takes place during the light of day, but continues to make those hairs on your body stand on end. It's not the horror you'd expect when someone got is standing behind you with a snarl on their face, but rather some actions that are completely out of the ordinary, primal, and wholly sadistic that you put yourself in this very real situation and can't imagine how you'd escape. With Aster's storytelling, camera movements, and attention to the most minute details, we have yet another perfect horror film.

But first, let's talk about this setup. Like Hereditary, Aster can perfectly capture extreme sorrow and sadness. Like we saw with Toni Collete's character in Hereditary when she broke down over the death of her daughter, we see something very similar to our main character named Dani (Florence Pugh from Fighting With My Family), as she is grieving the loss over someone close to her. Meanwhile, her grad-school boyfriend Christian (Jack Reynor from Kin) and his group of friends who are all preparing their thesis for graduation all think he should dump Dani, due to her state-of-mind. While Christian doesn't necessarily agree with them, he doesn't disagree with them either.

Christian and his guy friends decide on a fun trip to Sweden to visit the hometown of one of their friends, which a couple of them seem to take an interest in his culture. Christian invites Dani much to the chagrin of his fellow schoolmates. When everyone arrives, it's a perfect utopia of something you would hope to be a part of if you attended 1969's Woodstock, complete with music, flower white dresses, and beautiful scenery. You can also add to that some strong hallucinogens. From there, these US students take part in this village's customs, meals, and other work around the beautiful compound.

Now one of the characters that we follow is named Mark (Will Poulter from Son of Rambow and We're The Millers), who is our conduit to what we the audience is actually thinking. He's, of course, the comic relief, but will subtly talk out loud about what he's witnessing, which is to go along with our inner thoughts. At one point he says something about taking a wrong turn at Waco. It's great lines like that, where I felt like I was a part of this trip because I was thinking the same thing.

Stranger and more bizarre rituals start to come to the forefront and people turn up missing. I'm not talking about dance lessons either here. And to quote Wes Anderson, we're talking about throwing through the guy's windshield as we've seen from scenes in Hereditary. There is no shying away from the barbarous events that unfold here that will once again leave your jaw rubbing over the dirty floor. It's unbelievably good.

Aster also tells this incredible journey with only giving you little crumbs as you go along. He never reveals (like Hereditary), where it's headed until the final act, where you'll be blown away. It always leaves you guessing as to what can happen next but also delivering some excellent background information that will keep you thinking about it later on in this crazy universe he's created, such as with these Swedish people's rituals. His camerawork is still intact with a Kubrick-like slow tracking shot that never allows you to escape a tense situation. There aren't any fast edits that allow you to look away.

The acting here is excellent as well, but the real true spotlight is on Florence Pugh, who like in Fighting With My Family showed her acting chops, but here, she is put through the wringer like Toni Collette in Hereditary or even Shelley Duvall in The Shining. Aster has a way of getting these brilliant and nuanced performances from his main player that I just always want more. Overall though, this film underlines a bad relationship that should have ended long ago and is perhaps one of the most extreme breakup films ever made.

Lionsgate/A24 accepts Midsommar to Blu-ray, DVD, and Digital Copy combo pack. The discs are housed in a blue, eco-friendly plastic case with a cardboard sleeve featuring Florence Pugh and the totem. Inside, you'll find the digital code that you can download for Vudu. 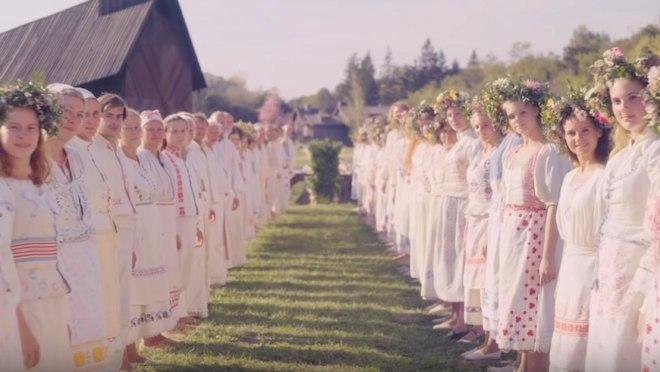 Lionsgate makes Midsommar its new May-Queen on Blu-ray + DVD + Digital copy in 1080p HD with a 2.00:1 aspect ratio. Taking place mostly during the light of day, the detail and color palette are dazzling.

Colors are sensational at every turn, starting out with a dark winter tone of blues, silvers, and grays. Faint street lights give way to a soft orange glow in the darkness. Soon after that, we're in Sweden, where it's rarely night time. The sun is bright and the lush fields of green are bold and rich with varying shades of grass color. Littered throughout these fields are wonderful yellow flowers that contrast nicely with the blue sky and brown tree trunks that surround this land. The intricate illustrations on all of the house walls as well as the beautiful arrangement of flowers that are crowned on Florence Pugh showcase brilliant primary colors. The body parts and blood are a perfect bright red that looks amazing against earthier tones. Black levels are inky when in certain lower-lit scenes, (which isn't often), but they never show any evidence of crush or murkiness and skin tones are always natural.

The detail is lifelike in each scene, revealing excellent closeups. Every freckle, scar, wrinkle, and individual hairs can be seen with ease. The practical visual effects show the intense body carnage smashed-in faces and broken bones, along with carved skin. The bear entrails are particularly detailed as well, which might make you squirm. Wider shots of the plant life outside, as well as the wooden interiors of the houses, show all the necessary attributes of a well-worn DIY abode.

Lastly, there were no issues with any banding, aliasing, or video noise that hindered this picture-perfect horror film. What a sublime video presentation. 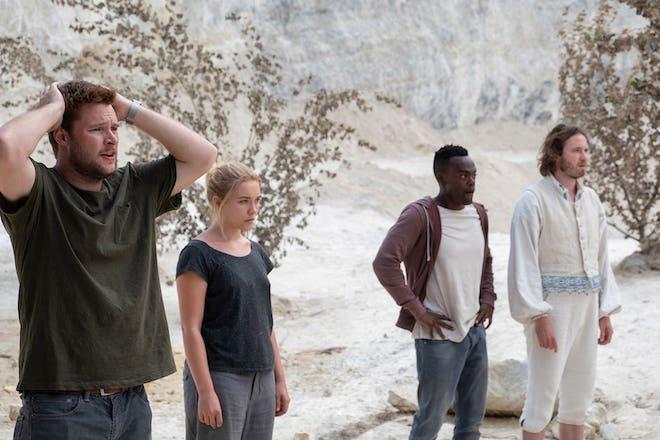 Midsommar jumps off the cliff with a flawless DTS-HD MA 5.1 audio track that is equal parts terrifying and satisfying with superb sound effects, a hauntingly bright score, and delightful atmospherics.

Sound effects are big and well-balanced on each speaker, especially during the drug-fueled sequences where sounds are enhanced a bit. Noises of people clapping, limbs being broken, and fire crackling is robust with good directionality. There aren't any giant explosions or gun blasts here, but don't let the subtle intense noises of cooking, eating, or other normal everyday commotion fool you. This is an expansive audio mix.

The atmosphere sounds of bigs, wind, and trees rustling, along with other people talking and singing are well-rounded and loud and come through the rear speakers often. This fully immersive track utilizes every speaker smoothly, specifically when some of the main characters are speaking just off-screen, where you'll be able to tell exactly where they are behind you. Also, during the May-Queen dance sequence as Florence Pugh is twirling around, the music seems to flow in circles as she moves around the live music and becomes fainter on one side of the infamous totem. Bass rolls in during the heavier music cues and the dialogue is cleanly rendered without any pops, cracks, or hiss. This is a fantastic audio presentation that won't leave you in the lurch. 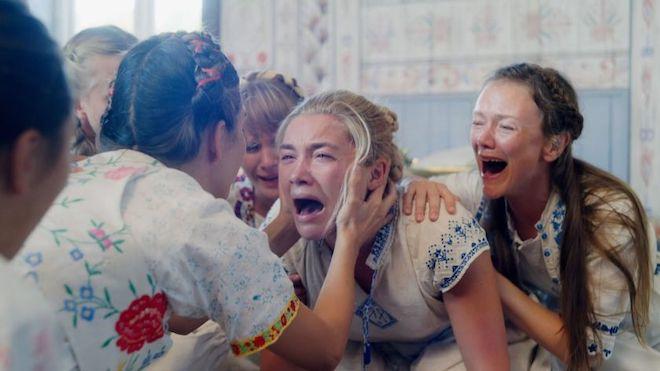 There are 26 minutes of bonus material on this physical edition of Midsommar. Besides a longer-than-normal EPK piece, there isn't much here. On the exclusive iTunes version, there are three other different extras, including the director's cut. 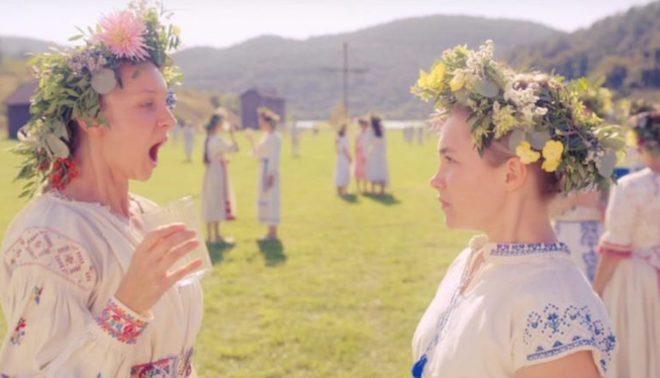 Midsommar is one of the best films of the year. Full stop. It's intense, highly detailed in its visuals and characters, along with great performances and a scary-as-hell story. Ari Aster has definitely hit another home-run with this film. The video and audio presentations are both top-notch, but there could have been more bonus features included. Still, this comes Highly Recommended, you know until Criterion decides to release this as part of their collection.