Fighting with My Family

Fighting With My Family is a fantastic film about a young girl who grew up in a pro-wrestling family in London and then joins the WWE at 18. The Blu-ray features a great 1080p HD transfer along with a strong DTS-HD MA 5.1 audio mix. Bonus features include an audio commentary, behind the scenes, gag reel, stunts, deleted scenes, and more. Highly Recommended! 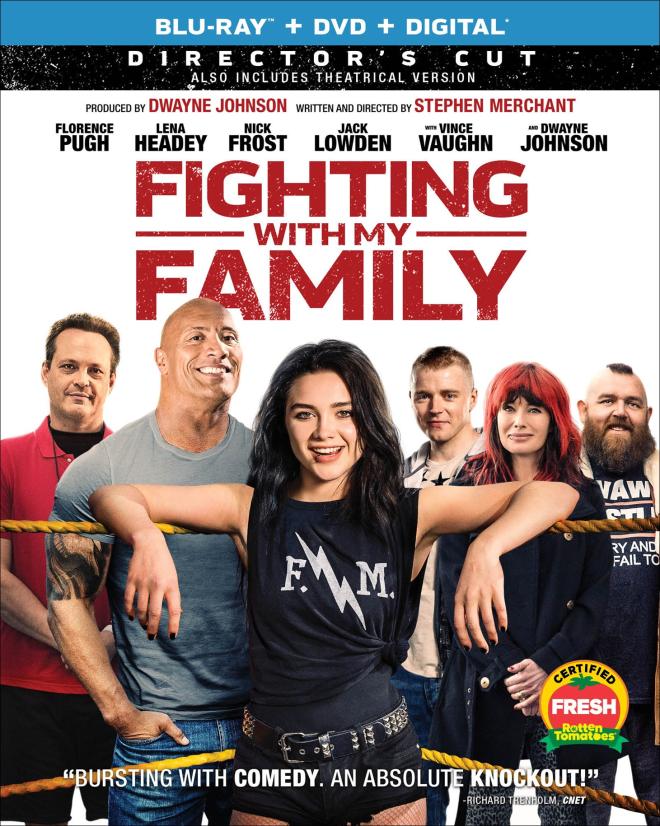 Pro-wrestling is a way of life and an escape into another universe of fun characters and storylines. It allows us to put aside real-world thoughts for a few hours and enjoy some high-octane entertainment from some of the world’s best athletes and entertainers.

After Stephen Merchant’s latest directorial effort, Fighting With My Family, you will forever remember the name Paige. A real-life woman who started wrestling at the age of 8 in England with her entire family of wrestlers, she signed with the WWE at 18 and won the Women’s Championship Title, making her the youngest ever to accomplish that feat.

Paige, whose real name is Saraya Bevis, showcases her life in Fighting With My Family, from her young days in the ring all the way up to debuting on Monday Night Raw. Florence Pugh plays Paige perfectly, handling all of the raw emotions perfectly and making you believe she is capable of all of the rigorous training that goes into pro-wrestling (although real-life pro wrestler Tessa Blanchard stood in for Florence during the more strenuous wrestling sets).

Nick Frost (The World’s End, Shaun of the Dead) and Lena Headey (Game of Thrones) round out the stellar cast as her wrestling parents, while Jack Lowden portrays Paige's brother, Zak. Merchant shows both the physical and emotional struggles of Saraya trying to fit in with the WWE training as well as her family back home trying to make ends meet with their own wrestling promotion.

However, Dwayne ˜The Rock’ Johnson, who plays himself in the film, takes an interest in Saraya like he did in real-life and wanted her to succeed. Meanwhile, Vince Vaughn plays the WWE training coach, which is an inspiration from several backstage managers in WWE, who plays out like a friendlier Gunnery Sgt. Hartman from Kubrick’s Full Metal Jacket.

Vaughn plays him with honesty and intensity. With all of these emotions coming together in the final act of the film, you can’t help but grab for the tissue and wipe a happy tear away for the story of Saraya Bevis. Nothing is forced or feels like it hits you over the head here. Even the dialogue is quick, witty, and keeps you smiling. Fighting With My Family dare I say it, is one of my favorite films of the year so far.

Fighting With My Family comes with one Blu-ray Disc and one DVD copy of the film. Both discs are housed in a hard, blue plastic case with a cardboard sleeve. There is an insert for the digital download code as well.

Fighting With My Family comes with a great 1080p HD transfer and is presented in a 2.40:1 aspect ratio. This is a great digital palette with a wide range of color. The movie starts out in a suburb of London where colors are slightly muted and vague. Each location almost has an old and dirty look to it. When Paige heads off to Florida though, colors brighten up and everything has a glistening shine on it.

Colors in the big arenas with red uniforms or the blue Smackdown color palette all look bold and rich. Scenes of swimsuits on the beach bring out the pastels and more primary colors as well. Also when inside the packed stadiums and arenas, the multitudes of colorful shirts the audience is wearing along with the well-lit stage settings look wonderful. Black levels are deep without crush and the different skin tones all look natural and distinguishable. There were no instances of aliasing or banding to speak of, making this digital video presentation look great.

Fighting With My Family comes with a strong lossless DTS-HD MA 5.1 audio mix that has a variety of great sound effects and nuanced noises. The big full force sound happens quite often, mostly inside the rowdy arenas where fans are yelling and cheering for their favorite superstars. The entire speaker surround system comes to life here with varying levels of cheers, music, and sound effects of wrestlers hitting the ring mat.

The low end of bass rumbles nicely in all of these instances, making for an in-depth sound design. Other quite moments between the wrestlers backstage or phone calls to London all sound full, robust and centered. The reverb of echo when Paige is inside large rooms or locker rooms sound natural as well. This is a fantastic sounding audio mix that checks all the necessary boxes with a little more oomph than expected.

A decent amount of extras are present here, including an audio commentary by the director, EPK, interviews, deleted scenes, and a gag reel. Perhaps the best, yet shortest extra showcases the training and real pro-wrestling that was studied for the making of the film.

Fighting With My Family is a heartwarming look at just one of its many wrestling superstars and how they worked their way up in the WWE. It's a good mix of comedy, drama, and fun, all while being a true-life story about a young girl who wants to wrestle. Even people who don't watch wrestling or are not fans will still enjoy this film, because it has a lot of heart and of course Dwayne 'The Rock' Johnson. The video and audio presentations are both great and there are some fun and informative bonus features as well. Highly Recommended!

Sale Price 13
List Price 14.98
Buy Now
3rd Party 3.97
In Stock.
See what people are saying about this story or others
See Comments in Forum
Previous Next
Pre-Orders
Tomorrow's latest releases