What animated Batman collection is truly complete without Batman Beyond The Complete Series? This uber-90s cyber-punk update sibling to Batman: The Animated Series sports the same grand animation style with an extra kick of science fiction. The Bruce Timm/Paul Dini animation style is on full display with this impressive 6-disc Limited Edition set - limited to 50,000 numbered units. The animation transfers are far and away better than any previous DVD release with crisp audio to match. This limited set also includes a special exclusive Funco Pop figure of Terry McGinnes Batman with some lenticular cards along with the Return of the Joker movie. It may not be as top-tier classic storytelling as Batman: The Animated Series, but it's a worthwhile update and a great nostalgia trip for fans. Highly Recommended.

Fighting crime takes its tole - one way or another. After decades of crimefighting, Bruce Wayne's (Kevin Conrad) health takes him out of the game as he nearly gave in to using a gun to defend himself when his heart couldn't keep him in the fight. Hanging up his state-of-the-art rocket-powered cape and cowl, Bruce Wayne retired from Batman, Wayne Enterprises, and recused himself to his mansion. 20 years later in 2039, Neo-Gotham is one again a crime-infested city without any heroes to look up to as the Jokerz gang runs rampant.

After his father was murdered by industrialist Derek Powers, 16-year old Terry McGinnis (Will Friedle) discovers Bruce's long-kept secret. Stealing a suit for himself, he brings justice back to the streets of Neo-Gotham. With Bruce as his mentor and guide, Terry becomes the symbol the city needs - unfortunately, an army of colorful villains are out to prove they're better than the Batman! 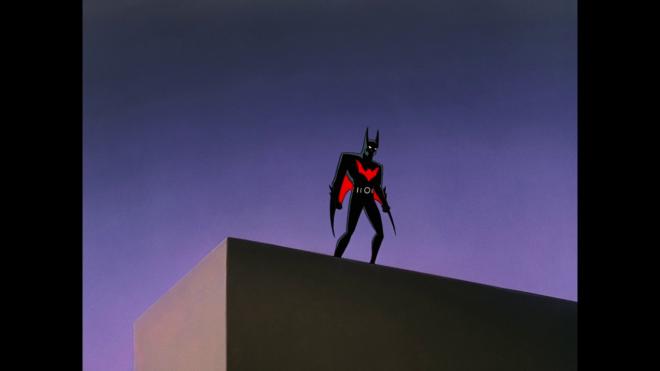 I have to admit to being a bit late to the game with Batman Beyond. When the show premiered in 1999, I was 17, working at a movie theater, and way too busy to watch cartoons after school. It wasn't until the show finished its run in 2001 and moved on to repeats that I finally found it in college. The way my freshman year of school worked out I had a nice free couple hours every afternoon to catch an episode between classes. It was a fun run - maybe not as impressive as the original Batman: The Animated Series, but it was a good way to burn some rare free time.

20 years later, the show is still a big hit with Batman fans. Batman Beyond spawned a solid comic book series, video games, and a pretty damn good feature film that brought back Mark Hamill as the iconic Joker. Rumors of a live-action movie have swirled around for years and recently started up again with some reports that Michael Keaton would return as Bruce Wayne - although that tidbit is probably just wild fan speculation. While it's often difficult to picture someone other than Bruce Wayne as Batman - even when the comics try it, it's not always a success - Terry McGinnis proved to be a worthy successor to the mantle of the bat. 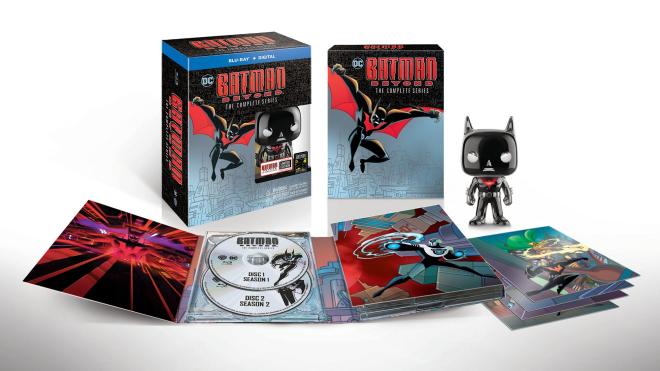 Warner Brothers evidently learned from their packaging mistakes with Batman: The Animated Series! Batman Beyond: The Complete Series arrives in a numbered box limited to 50,000 units. The full package is a hardstock paper that feels sturdier than the dent and smash-prone paper fans had to deal with for The Animated Series. So barring being shipped in a bubble mailer (…the horror…the horror), fans shouldn't have the damaged packaging troubles they had the last time out.

This six-disc set brings the entire 52-episode run of the show along with the classic Batman Beyond: Return of the Joker film - which is the same disc as the 2011 release. All six discs are housed in a digipak with each disc getting their own tray and housed in its own hard stock sleeve. The included Funko Pop figure is housed in its own standard figure box giving you a few options for display. Also included are six lenticular cards that might cut a nice frame or two on your wall. Each disc loads to a static image main menu with traditional navigation options. 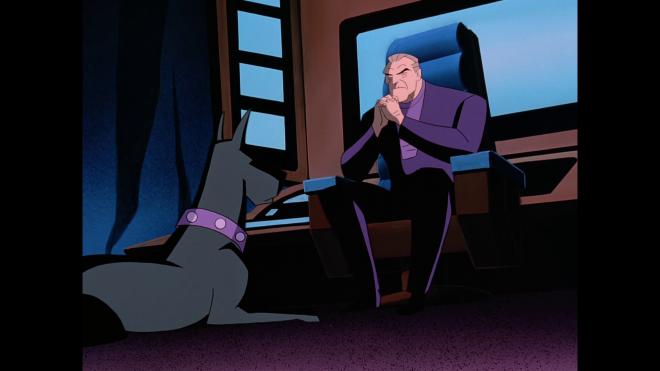 Unlike Batman: The Animated Series - Batman Beyond: The Complete Series is a tale of two sources. More than half of the series was cell animation shot on film. Towards the end of the run, the series was shot on video and for this set 11 or 12 of those last episodes were apparently sourced from upscaled tape transfers. The textural differences are notable - but thankfully this Blu-ray set offers some color, black level, and contrast uniformity to mask some of the more obvious differences in line clarity and film grain structure.

Being shot on film cell animation, the first half of the series very much looks like Batman: The Animated Series where you can spot the brush strokes in places and the line textures of hand animation. Some dust particles intermittently would be trapped under the layered sells and lend to an organic feel to the image that I quite liked. I appreciated that there wasn't any overt digital trickery to make this first half look more like the second. Colors are bold with neon pinks and purples getting to dominate this futuristic Gotham instead of the rusty browns and reds of The Animated Series. There is some occasional frame jitter and very sporadic speckling, but otherwise, these episodes look immaculate. 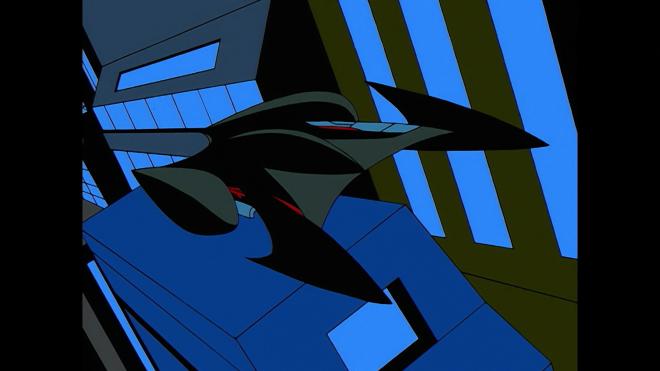 From what I observed briskly watching through the series when the later episodes kick in sourced from upscaled video - you can spot the differences that last through the run of the show. I don't know the resolution these episodes were captured at and therefor sourced for these Blu-ray presentations, but they still look pretty darn good with relatively clean lines and bold colors. However, the character of brush strokes and slight dust spots in the cells is absent giving the image a more manufactured quality.

The last time I saw any of these episodes was when I was still getting discs mailed to me from Netflix several years ago. Going from memory of those SD presentations I was still very impressed with this update of these later episodes. It's difficult to come with a uniform score for this series because of the differences. In this instance, I lean my appreciation stronger for the first half of the series than the second but overall the show looks great. My only real gripe is the show's opening titles which were shot on video before HD was a standard and look really rough like a bad video diary from MTV. That's my only real gripe with this series' 1080p 1.33:1 Blu-ray presentation. 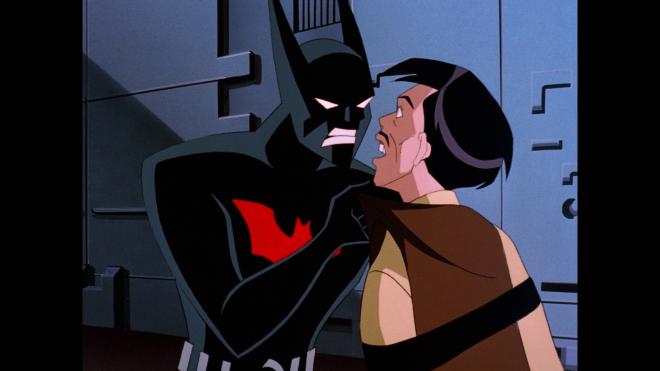 On top of the visuals, Batman Beyond: The Complete Series rolls with solid DTS-HD MA 2.0 stereo tracks for each episode. Uniformly each of these audio tracks is great stuff with clear dialogue and active sound effects that give a natural sense of movement. Sounds effects, score, and dialogue come together to create an active and often dynamic soundscape that feels right with the animation. If I have a slight misgiving is it feels like the tracks are a bit on the softer side. Overall levels are okay, but I felt like each episode needed to be popped up an extra notch or two above my normal listening volume. Not a major issue at all - once you have it where it sounds right it's great and doesn't require any extra monitoring or volume riding. 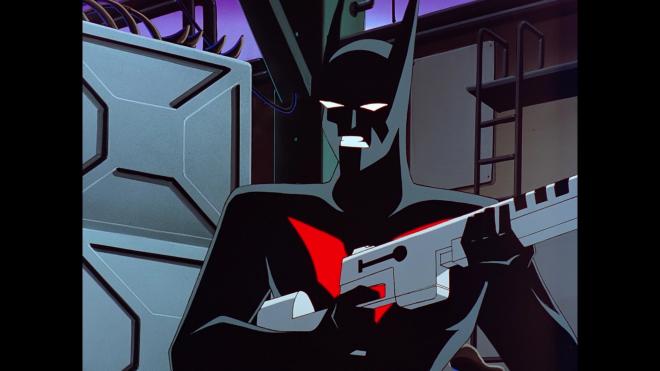 There are a bunch of bonus features peppered throughout the set. The bulk of the archival materials that were available on the original DVD sets is found on each main season disc. The Bonus Features disc is where you'll find the newer produced extras that offer some more insight and interesting nostalgic bits. In total you're looking at several hours of great commentaries and behind-the-scenes material! Sadly no new bonus features were included for Return of the Joker as that disc is identical to the 2011 release.

Batman Beyond: Return of the Joker 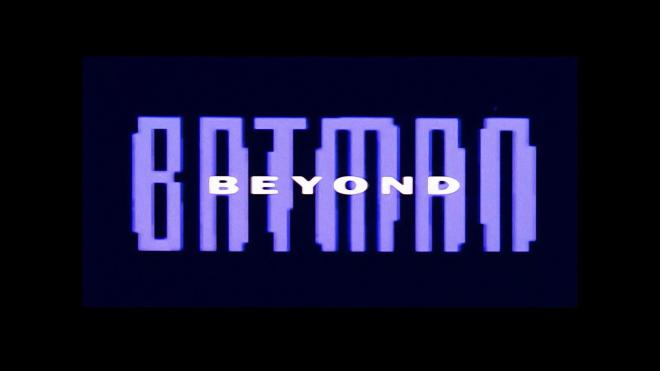 I personally wouldn't put Batman Beyond: The Complete Series on the same quality pedestal as Batman The Animated Series, but it's more than worthy to occupy the same shelf space in my collection. Batman Beyond has offered Batman fans 20 years of speculative "What if?" styled storytelling about a possible future where Bruce Wayne is no longer Batman and a new hero must rise. We've had an animated series, a great comic series, some fun but iffy video games - but when are we going to get a live-action movie? As we wait for that inevitability, we get to kick back and enjoy this 52-episode and one animated feature film set.

Warner Bros. corrected a wrong with the packaging of The Animated Series to give Batman Beyond a much stronger sturdier box to contain all of its bits and pieces. The image quality is a massive step over the previous DVD releases even if the experience isn't quite uniform given the production change from film to video halfway through the series' run. On top of all the episodes, you get Batman Beyond: Return of the Joker, a bunch of great new bonus features, archival bonus features, a limited edition Funko Pop figure, and some cool lenticular cards! All around this is a great set and if you're a fan of the show or know someone in need of the perfect gift this holiday season - you can't do wrong with Batman Beyond: The Complete Series - Highly Recommended.

Sale Price 125
Buy Now
3rd Party 125
In Stock.
See what people are saying about this story or others
See Comments in Forum
Previous Next
Pre-Orders
Tomorrow's latest releases