Shaft has come back to the big screen almost twenty years later after rebooting the franchise in 2000. Samuel L. Jackson took to this role like a duck to water and still has not lost a beat, even when his grown-up kid enters the mix following in his father's footsteps. It's a delight for sure. The 1080p HD transfer is wonderful and the Dolby Atmos track is fantastic, along with some worthwhile bonus features. Recommended! 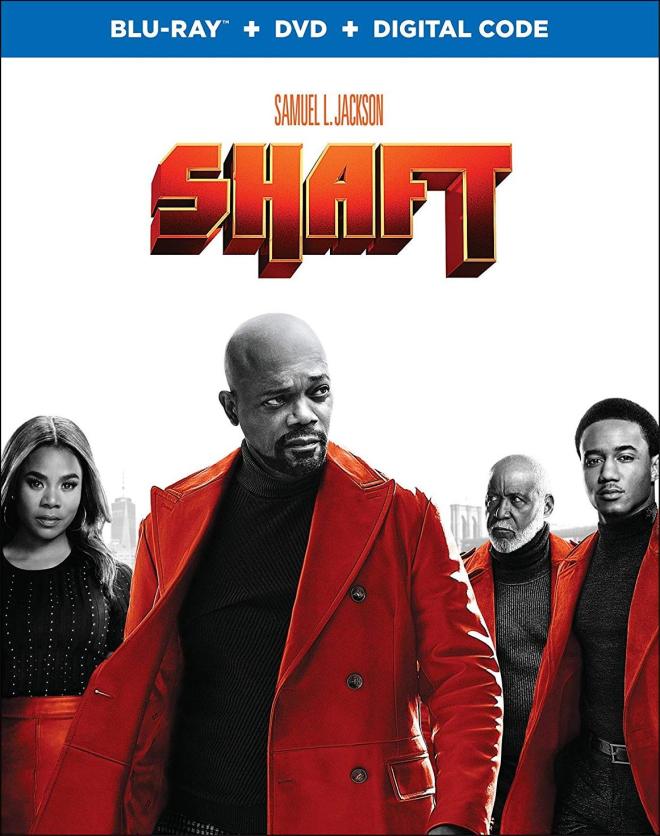 There need to be more heroes like Shaft. Even if he breaks a few of the rules in order to take out the bad guys, he gets the job done and makes the world a better place, all while having a smile on his face and consistently makes everyone laugh. Thanks, Shaft, or shall the thanks be given to Samuel L. Jackson who looks like he’s having the time of his life in this film. Either way, this sequel to the 2000 film along with the original Shaft movies from the 1970s is Pitch Perfect Shaft.

The character Shaft is a lot like James Bond, but if Bond was funny, smoother with the ladies, and actually knew how to have fun with his work. As people across the globe know, Samuel L. Jackson is synonymous with the word that iconic, delicious word that that rhymes with "mother-trucker", and those wonderful words are on big display throughout the film. It’s his poetic stamp on dialogue as he eloquently delivers it with vigor and meaning.

Director Tim Story (Barbershop, Ride Along) sets the first scene in 1989 Harlem where Shaft (Jackson) and his wife Maya (Regina Hall) are in their car on a date, where they are attacked in a gunfight. Shaft saves the day, but his wife and their brand new baby were in harm's way. Needless to say, their relationship ends and Shaft becomes the Shaft we know through the years until we get to the present day. It’s here that we follow Shaft’s son John Shaft Jr. (Jessie Usher), who was raised by his mother, went to MIT, and is now a top-notch analyst for the FBI. The catch is that he is the polar opposite of his father. He wears skinny jeans, doesn’t like violence, never curses, and couldn’t be more awkward in front of the ladies. It will make for some excellent comedy later on.

The first 15 or 20 minutes of the film is all set up, which is a bland by-the-numbers story arc of Shaft Jr.’s friend being killed and trying to figure out who committed the crime, which he fails at detective work at every turn. His character and the others with who he interacts are just not entertaining on-screen. I found myself fading away fast, however, Samuel L. Jackson turns up for the rest of the film and saves the entire movie with his brash attitude and hilarious dialogue, where it seems like they just let him go crazy with improv.

It’s everything the film community wants in a Samuel L. Jackson role of this caliber, where he’s constantly making fun of his son, while at the same time looking out for him. When Shaft enters his son’s furnished apartment, he can’t help but make a series of funny-as-hell jokes about his taste. It plays out very well. It’s a more amusing version of The Odd Couple for a lot of the film but set in a violent drug world. Of course, the original Shaft (Richard Roundtree) shows up as well and handles the action and tone perfectly.

Shaft (2019) succeeds in its mix of comedy and action, while never getting side-tracked on silly tangents. It’s straight to the point and full of enjoyment of the adult variety. Shaft talks the way we should start talking again, not afraid to be politically correct and be brutally honest. He doesn’t hide behind soft language, which is a breath of fresh air. It shouldn't take another 20 years to make another sequel because Shaft is the hero the world needs at this time.

The Vital Stats: The Blu-ray

Shaft (2019) comes to Blu-ray + DVD + Digital Code with a 1080p HD transfer. The discs are housed in a hard, blue plastic case with the artwork of the film, featuring Samuel L. Jackson himself. There is an insert for the digital copy as well included, 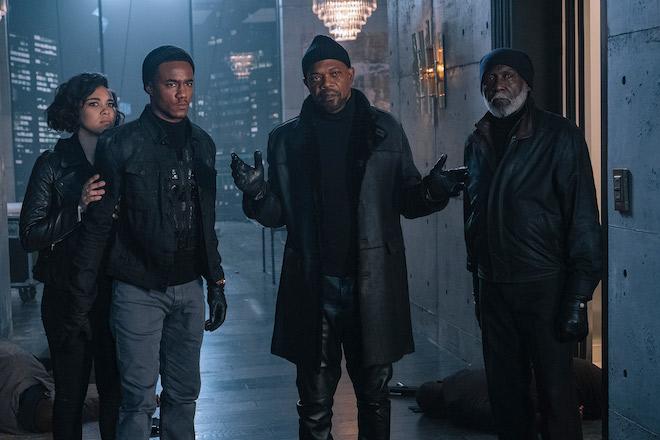 Shaft (2019) investigates its way to 1080p HD on Blu-ray with a 2.40:1 aspect ratio that looks wonderful in its format. Both the detail and its multiple-color palettes perform nicely here.

Colors are well-balanced and look sharp in every scenario. The colorful wardrobe both the Shafts wear standout and contrasts well with the cooler background of the city streets. The interior of Shaft's place has a warmer tint to it with amber lighting and brown colors surrounding the objects. All looks excellent, even when the multi-color glitter shines from Jackson's face. In another sequence that takes place in a night club, there is a big red hue that accents all of the liquor bottles as well as the actor's faces. Other than that, there are some silver/blueish schemes to the picture, which has the primary color coats and shirts that look great at the forefront. Black levels are deep and inky, especially during a nighttime climactic scene in a high-rise apartment, none of which have any crush or murky shadows. Skin tones are also natural.

The detail provides great wide shots and closeups alike, revealing all of the facial features of the actors. Individual stubble, hairs, scars, wrinkles, and makeup blemishes are easily distinguishable in all forms of lighting. The suave threads in the clothing also look excellent, as do the background props and set design, offering a very crisp looking detailed image.

Lastly, there were no issues with banding, aliasing, or major video noise that crept up. 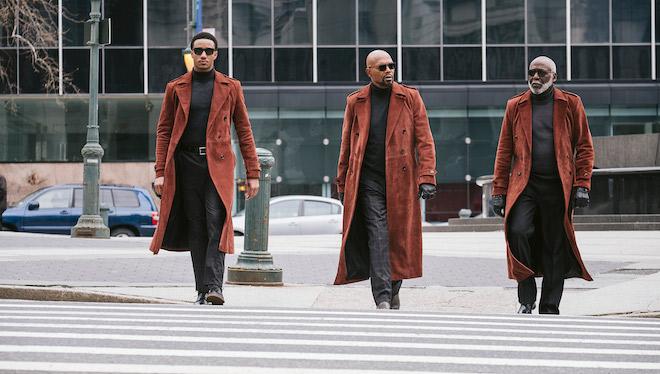 This Blu-ray was not expected to come with a Dolby Atmos track, but that's what happened, and it's wholly electrifying. For those who are not Atmos capable yet, a Dolby TrueHD 7.1 mix will be served up.

While the Dolby Atmos height speakers don't kick in every single minute of the film, they dive headfirst into top gear where it counts. Being mostly a comedy film, one wouldn't expect a movie like this to have such a big audio presence, but it packs a punch in each scene with amazing atmospherics and booming sound effects.

Right from the first scene and on throughout the entire film, there are a few big shoot outs, with each gun blast having a loud and robust bang. There is quite a bit of depth with each blast too with a low end of bass that rumbles each time. The Dolby Atmos track has each bullet flying by smoothly with great directionality and with the perfect speaker to speaker transition. It's quite an immersive experience.

The overhead speakers don't rain in too often, but when they do, the bullets drop down from above. Dialogue is clean and clear without any audio dropouts, and the score and music of the film are lively and always livens up each scene. 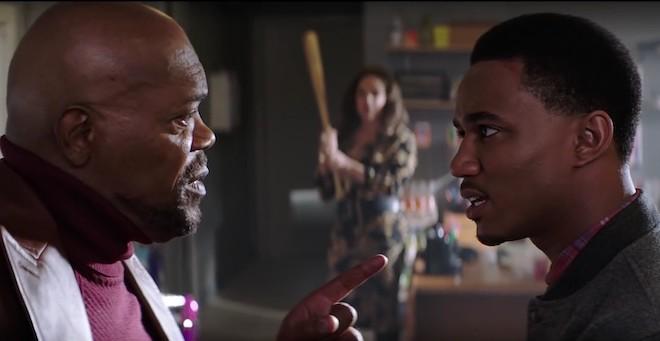 Shaft (2019) comes with around 64 minutes of bonus features, including deleted scenes, making-of featurettes, and more. 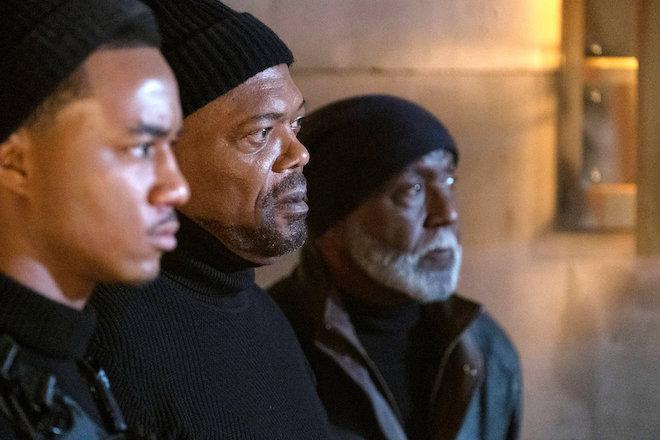 Shaft (2019) starts out a bit slow, but as soon as Samuel L. Jackson turns up on the screen, the laughs come fast and hard. It was a surprising little gem of a sequel that is re-watchable and a great addition to the Shaft lore. Bring more Samuel L. Jackson, please. The 1080p HD transfer and the great Dolby Atmos audio track are wonderful, along with some good bonus features to boot. RECOMMENDED!