BarberShop: The Next Cut

It’s been more than 10 years since our last appointment at Calvin’s Barbershop. Calvin and his longtime crew, including Eddie, are still there, but the shop has undergone some major changes. Most noticeably, our once male-dominated sanctuary is now co-ed. The ladies bring their own flavor, drama and gossip to the shop challenging the fellas at every turn. Despite the good times and camaraderie within the shop, the surrounding community has taken a turn for the worse, forcing Calvin and our crew to come together to not only save the shop, but their neighborhood.

A movie with a message can mean well, but if its trappings and design appear manufactured, that message can be a bit tough to swallow. Thankfully, 'Barbershop The Next Cut' doesn't fall all the way into that trap. While Ice Cube, Cedric the Entertainer, Eve, and Sean Patrick Thomas make a welcome return to their styling stations, sadly none of the original creative team came back, and their absence is notable. With a new director and new writers, this 'Barbershop' takes some time to touch on a tough current issue while also finding the time to provide a few good laughs as well.

Life on Chicago's south side has always been rough and tough on its residents. But when you have people like Calvin (Ice Cube), Eddie (Cedric the Entertainer), Terri (Eve) and the rest of the stylists at the salon, one would hopefully see some improvement in the neighborhood. In spite of their shop, and other successful business like J.D.'s (Anthony Anderson) catering company, the south side is tearing itself apart with a rash of gang violence. Every day there is another shooting and another death the salon has to come to terms with. The violence hits home hard when Calvin's son Jalen (Michael Rainey Jr.) starts showing signs of being involved in gang activity at school. It hits even harder as it appears Rashad's (Common) son Kenny (Diallo Thompson) is the one who got Jalen involved in the gang.

If the salon and all of the employees are going to survive the violence, let alone the internal drama that comes with operating a co-ed salon, they're going to have to think of something fast. One could call their scheme of free cuts and styling for 48 hours as a means to bring the community together "hairbrained," but it might be the only option left. If they can't get these rival gang members to sit down and talk rather than shoot each other, Calvin may have to make the tough decision and risk moving the salon to the north side of the city and away from the people he's known all his life. 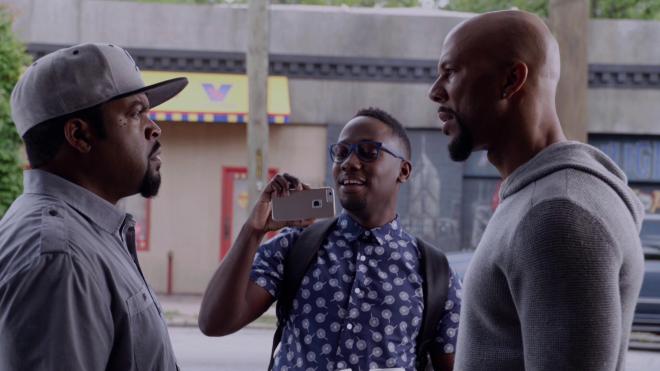 With the number of shootings and deaths in Chicago just this year alone, one would have to live with their head in the sand to not know anything about it. Day after day, the number of shootings has skyrocketed. As someone who lives in Chicago, it's difficult to escape the sense of dread, exhaustion, and even an amount of apathy. The violence isn't limited to just the south side in a city with a working mass-transit system. Granted the majority of the gang violence is relatively concentrated, however, there are very few areas of the city that haven't been touched by it. With the current state of things, it's understandable that films like 'Chi-Raq' and now 'Barbershop The Next Cut' have popped up. It's a difficult situation and people are looking for answers - or at the very least reassurances that people outside of the city understand what's happening. While 'Barbershop The Next Cut' tries very hard to offer solutions or at least an idea of what to do about the violence, the situation isn't nearly that cut and dry. It isn't nearly as simple as one gang not liking the other as portrayed in this film, but I'll give the flick credit for putting in the effort.

Where 'Barbershop The Next Cut' works is by maintaining a sense of optimism and hope through some great humor. Franchise stalwarts Ice Cube, Cedric The Entertainer, Regina Hall, Eve, as well as newcomers Common and Nicki Minaj hold their own. Their interplay is what keeps the film lighthearted and fun. One would think it difficult, or at the very least tasteless to make light of a situation like this, but they manage to pull it off with some measure of grace and honesty. It's not a funny situation at all, but the humor is a welcome respite to the dramatics.

The place where 'Barbershop The Next Cut' goes astray is with some inner office drama. This portion of the film feels like a load of dead weight. In the context of the rest of the film, a supposed brewing affair between Common's and Nicki Minaj's characters could have used some trimming or excising altogether. It feels out of place when you have a better story about two friends who are being torn apart by the activities of their sons. On top of that, there is the better story about Calvin struggling with what to do about possibly relocating the salon. It's actually a very real issue Chicago faces, those with the means move away, leaving behind fewer and fewer people to try and turn things around. New series writers Kenya Barris and Tracy Oliver don't give these moments their full due respect, and director Malcolm D. Lee lets the tangents dominate the second act for far too long. Lee has a knack for drama and comedy, he displayed that with both 'The Best Man Holiday' and the underrated 'Undercover Brother,' but his natural sense of energy and wit isn't nearly as sharp with this film.

In spite of some story balance issues between the humor and the drama, 'Barbershop The Next Cut' is still a pretty good little flick. It has a lot of heart, the cast is just as funny as ever, and more importantly, after a twelve-year absence between films, there is a lot of life left in the 'Barbershop' franchise. If anything, it gives me hope that Ice Cube's long-gestating fourth 'Friday' film would be worth the effort. If you were already on board with the 'Barbershop' stylists, you should be happy to see where the franchise has gone. If you're new to the series, you shouldn't feel any obligation to watch the previous movies to catch up. As a third entry in a franchise, 'Barbershop The Next Cut' thankfully feels like a standalone movie and not just some quick cash-grab effort.

'Barbershop The Next Cut' arrives on Blu-ray thanks to Warner Brothers. Pressed onto a BD50 disc, the disc is housed in an eco-friendly Blu-ray case. Also included is a Digital HD voucher. The disc opens with trailers for other upcoming Warner Brothers films before arriving at a static image main menu with traditional navigation options.

Warner Brothers continues its tradition of giving its new releases great HD transfers with 'Barbershop The Next Cut.' The 1.85:1 1080p image is sparkling clean, sharply colored and richly detailed. While shot digitally, the image has a nice film-like quality to it and never looks overly "video." As expected, detail levels are sharp and provide plenty to appreciate, especially with all of the hair styling and fashions to be seen. Colors are bright, vibrant, and leap off the screen with plenty of primary presence. Black levels are rich and inky and there is plenty of shadow separation to give the image plenty of natural depth - especially in the salon. Some occasional noise creeps up here and there, but nothing so severe to knock the score for. All around this is a great looking Blu-ray.

'Barbershop The Next Cut' comes packed with a rock solid DTS-HD MA 5.1 audio track. Dialogue is clean and clear to hear throughout. As a very talking heavy film, it plays things mostly front and center and lets the ambients and background effects with the soundtrack fill in the channels. There really isn't any breakout moment where the surrounds kick into high gear and dominate in a way one might expect with an action film. Instead, the surrounds provide a subtle sense of space and dimension. Levels are even, once you have them set at a comfortable level you shouldn't feel the need to adjust things. Free of any other issues, this is an all around great audio mix.

The Next Cut: Barbershop Bootcamp: (HD 4:34) This is a quick little feature about the cast learning how to look like actual stylists and barbers.

Deleted Scenes With Malcolm D. Lee: (HD 12:34) Lee introduces the cut scenes which are actually pretty funny material, but it's understandable why it was cut because they didn't fit with the tone or the rest of the movie.

Usually, it's the third film of a franchise that brings the train to a screeching halt. Thankfully, a twelve-year break was the rest the 'Barbershop' franchise needed. 'Barbershop The Next Cut' comes packed with some excellent humor, a fantastic cast, as well as a heartfelt and timely story. While some subplots can stall the main story, the film itself proves the franchise has a lot of life left in it. Warner Brothers brings 'Barbershop The Next Cut' to Blu-ray with a fantastic A/V presentation. Aside from some funny deleted material, the extras are unfortunately slim. Fans of the series should absolutely consider a purchase. Recommended.

Sale Price 2.49
List Price 9.97
Buy Now
3rd Party 3.99
In Stock.
See what people are saying about this story or others
See Comments in Forum
Previous Next
Pre-Orders
Tomorrow's latest releases