Revenge of the Shogun Women - 3D

Hell hath no fury like 13 scorned women martial arts masters in Mei-Chun Chang’s Revenge of the Shogun Women 3-D! A martial arts revenge classic, the tale of a band of women warriors out for revenge against the bandits that ravaged them is wildly entertaining - and lovingly restored from the best available elements in 3-D by 3-D Film Archive. Presented in BD3D Polarized 3-D and red/blue Anaglyph 3-D (and flat 2D), the image could never be picture-perfect but there are some incredible three-dimensional fight sequences and the English-dubbed audio mix creates a highly entertaining experience. Toss in some new 3-D shorts and you have another excellent release from 3-D Film Archive and Kino Lorber Studio Classics. Recommended

At the turn of the 18th century, a rampaging band of bandits lays waste to the countryside toppling villages and taking everything they please - including the virtue of the young women. After being ravaged by these bandits, thirteen women sequester in a monastery to train as nuns. Part of their training includes the mastery of the deadly martial arts. When the bandits attack a nearby village and the people turn to them for protection - the women have their chance to exact their revenge and regain their honor.

From the director of Dynasty 3-D - Mei-Chun Chang, Revenge of the Shogun Women aka 13 Nuns, is another high-impact 3-D martial arts extravaganza. Using the same finicky Super-Touch 3-D system, fight sequences take on a whole new dimension with some impressive depth. But like Dynasty 3-D, cooked in limitations with the camera rig as well as improper distance measuring causes some unfortunate parallax effects. Limitations aside, this is still a very fun and engaging 3-D experience.

The story is pretty standard martial arts revenge material. The spin with a gang of warrior nuns gives it a fresh feel adding a new dimension of badassery. While the antagonist bandits are a bit one-dimensional, I really liked the arc of the warrior nuns. After being beaten and raped they’re put into this convent to exalt Budah and bring peace to their souls. But when the bandits appear again, they’re more than prepared to take action - even if their quest for revenge is against the ideals of their teachings. 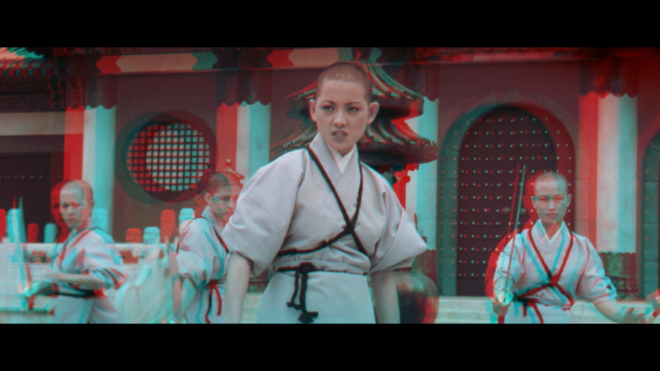 The firsts, feet, hair, and weapons fly with bloody fury and it’s a hell of a good time. I’d heard of this movie many years ago but couldn’t find a decent copy anywhere. Now that I have it, the wait was worth it. It’s certainly not the best martial arts film ever made but there’s a genuine kickass quality to the story and the fight sequences that sets it apart from the average outing. I had a blast with Mei-Chun Chang’s Dynasty. With this follow-up, the director expanded everything that worked in that film for this new adventure. The story feels bigger. The action sequences are massive. The 3-D photography is more elaborate with a range of intricate and very impractical weaponry flying out of the screen. The villain’s weapon of choice is practically worth the price of admission alone! It’s just a great time and now everyone can see the film as it was meant to be seen.

Vital Disc Stats: The Blu-ray
Revenge of the Shogun Women 3-D arrives on Blu-ray for the first time thanks to 3-D Film Archive and Kino Lorber Studio Classics. Pressed on a Region A locked BD-50 disc, the disc is housed in a standard hard keepcase. If your home theater setup is Digital 3-D ready, the disc automatically loads to Polarized 3-D with a sub-menu letting you choose between Polarized or Anaglyph 3-D. From there in the main menu you can decide if you want to watch it flat in 2-D - but who would want to do that, right? Also included with this set is one pair of red/blue Anaglyphic 3-D glasses. 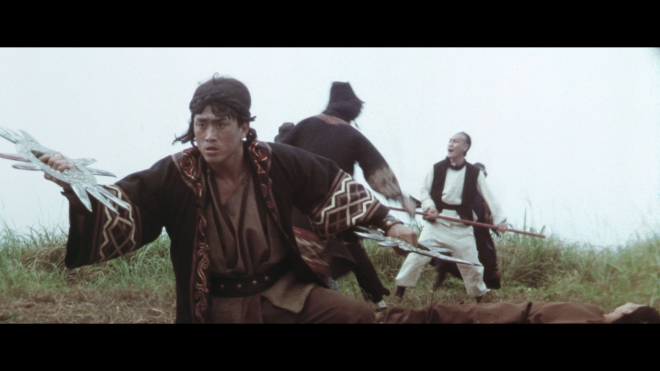 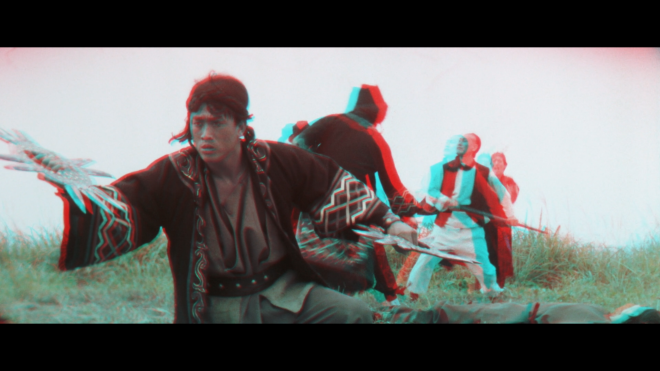 Like Dynasty before it, Revenge of the Shogun Women has been lovingly restored from the best available 35mm print elements by 3-D Film Archive. And like Dynasty, it’s far from perfect because of the limitations of the source elements. Things are pretty rough around the edges with some print damage, image stability, some color bleaching, and black level stability that has been mitigated as much as possible to craft a viewable 3-D experience. While maybe not picture-perfect, the experience is a lot of fun in 3-D.

The roughest stretch of the film is the opening bandit attack that sets up the main thrust of the story where we meet our future warrior nuns. But once that sequence is out of the way, the rest of the film is far more stable. Pretty much everything after the opening credits is in very good shape. There is still some occasional speckling, scratches, or color fading, but nothing quite as rough as those opening minutes.

The 3-D work is quite something with an impressive range of depth along the z-axis. Now again, the failure for the filmmakers to properly measure their focal distance with objects leads to some frequent parallax “ghosting” when anything pops out of the screen - but the image only lingers a second or two on the effect so it isn’t terribly distracting. You’re still getting the main effect of the ax, blade, or speer flying out of the screen. And after spinning Dynasty 3D again, I'd say this presentation of Revenge of the Shogun Women handles the protrusion 3-D effects much better. It’s a lot of fun and with all of the high-flying kung-fu antics, the extra depth just adds one more layer to the overall entertainment value of the flick. 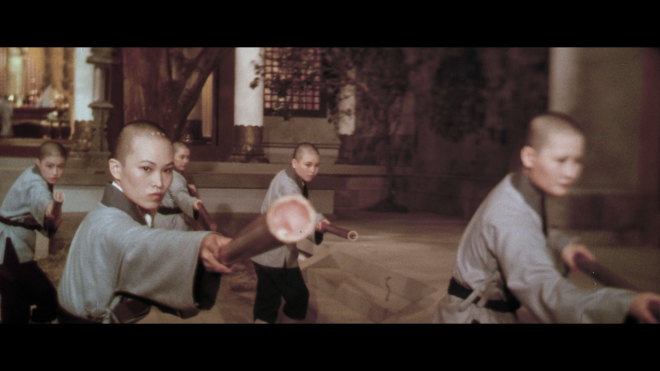 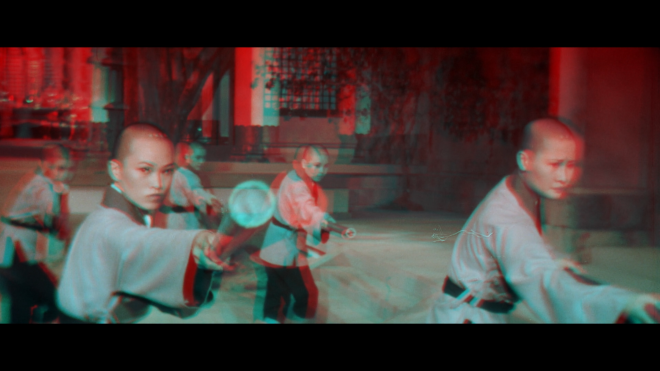 Now, using their proprietary Anaglyph system, 3-D film Archive gives folks who don’t have a digital 3-D setup the ability to watch this film in three dimensions. The key difference here is the obvious red/blue coloring from the glasses. I typically can’t do Anaglyph, my eyes just don't like it unless I'm looking at a static image or in a comic book. Past releases on the format like Spy Kids 3-D or the first Blu-ray release of My Bloody Valentine 3-D and Friday the 13th Part 3 just gave me horrible headaches. However, each of 3-D Film Archive’s Anaglyph 3-D presentations for Silent Madness 3-D, Dynasty 3-D, and now Revenge of the Shogun Women has been a very comfortable experience. My eyes struggle a little bit with the red/blue color of the glasses but the overall eyestrain isn’t nearly as severe nor does it trigger raging migraines. It’s not my preferred way to experience these films, but it’s nice knowing other folks out there can see this film in 3-D too. 2-D is of course an option, but for this film, the theatricality of the fight sequences obviously choreographed for three-dimensional viewing is just silly looking in 2-D. 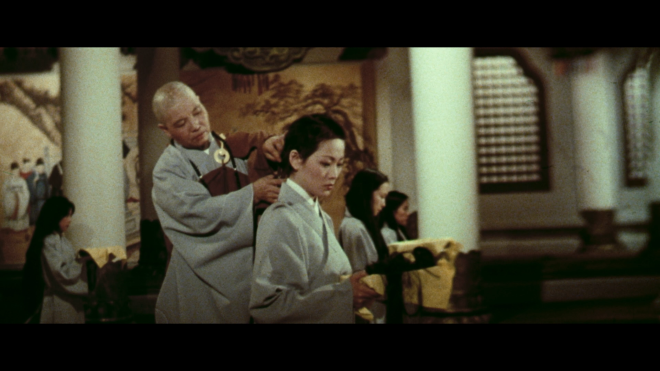 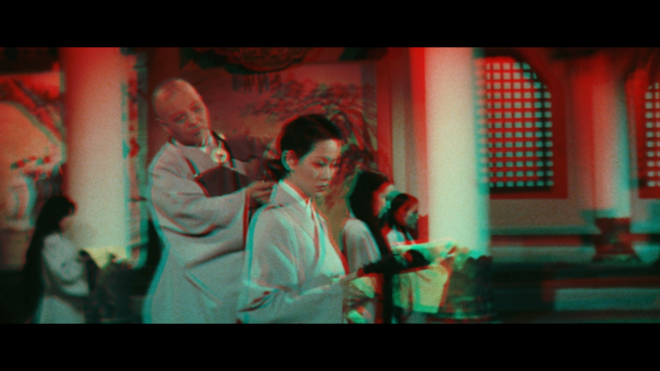 Revenge of the Shogun Women arrives with a solid English Dubbed DTS-HD MA 2.0 audio track. The electric score, dubbed lines, and exaggerated sound effects are quite impressive! Growing up in the 80s the only way you got to see 70s kung-fu movies was with terrible dubbing and that sort of nostalgic experience is what we have with this release. Lines of dialog don’t always make sense. Sound effects don’t feel organic to the film and the electronic score sounds like a better fit for Video Poker than a film. But it all sounds great. There are some slight pops and a couple of dropouts but overall nothing to get hung up over. 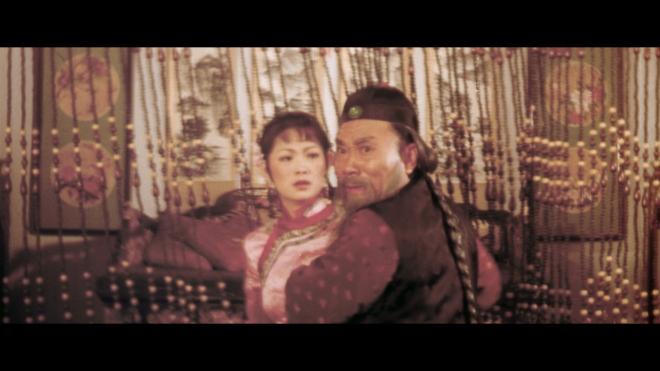 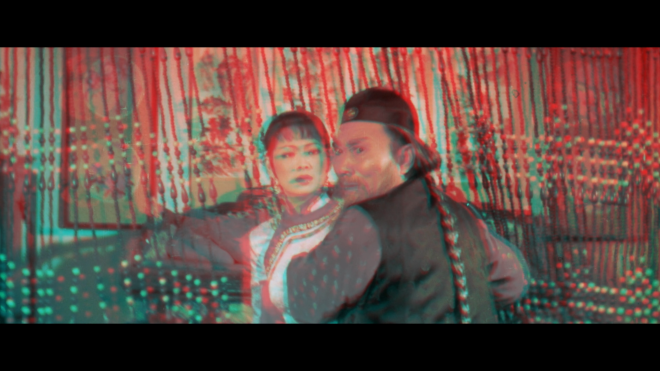 3-D Film Archive has also gathered together and restored three vintage 3-D shorts for your enjoyment. Each is their own bit of fun - Persian Slave Market is more of a burlesque show, which doesn’t fit the title at all. College Capers is its own fun little romp while Two Guys from Tick Ridge feels like a 3-D expo but with two guys narrating the onscreen action like your Dad during a slideshow of family photos. All are presented in Polarized 3-D and Anaglyph 3-D
College Capers (1953) - (HD 3D 15:15)
Persian Slave Market (1953) (HD 3D 11:05)
Two Guys from Tick Ridge (1973) (HD 3D 16:28) 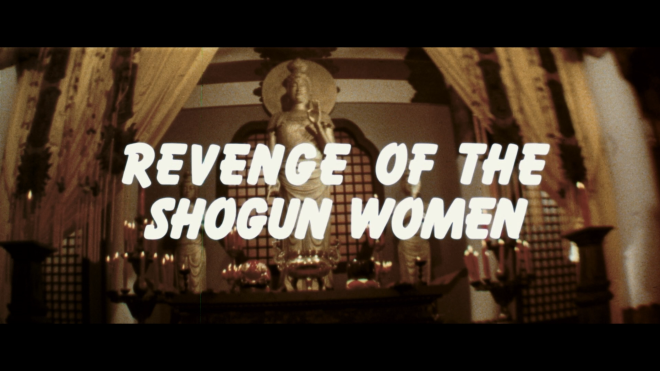 Revenge of the Shogun Women 3-D is another classic chopsocky martial arts flick that gets a new lease on life with a great 3-D Blu-ray release. The story doesn’t revolutionize the genre, but it offers a fun spin on the standard revenge plot. Top it off with some impressive albeit imperfect 3-D photography and you have yourself one hell of an entertaining movie. 3-D Film Archive has delivered another impressive restoration considering the rough 35mm elements they originally had to work with. Image depth is very good even is some of the effects don’t quite work as intended. Audio is solid and gives you the lovingly nostalgic kick of goofy English dubbing. Add in three restored 3-D shorts and you have a pretty great package to add to the collection. Recommended.