The best way to fully experience a multi-dimensional comic book movie with your favorite web-slinger is in three dimensions. ...If you import it from Germany or France. But, hey, at least it's Region Free! Like its main character, the 3-D visuals are spectacular and bring this amazing Spider-Man to vivid colorful 3-D life. If you're a 3-D fanatic and need to have Spider-Man: Into The Spider-Verse in all three dimensions, it's worth it. However - there are a couple of little caveats. No Atmos audio and some of the "thought bubble" accents are only in German, but the included standard 2D Blu-ray does include all the same bonus features as the North American release. If you've gotta have it in 3D, this German Spider-Verse is Recommended.

"No matter how many hits I take, I always find a way to come back."

For my full thoughts on the movie, read my 4K UHD BLU-RAY REVIEW.

Maybe it was the advertising or maybe I was so wrapped up in the live action MCU that I simply didn't consider that Spider-Man: Into the Spider-Verse would be all that great. So it took a lot of great reviews and more than a little browbeating from friends to get me to drag my but into the theater during a pretty damn packed holiday movie season. I'm grateful for managing to catch one of the very last 3D screenings in my area because I don't think it would have inspired me to make the effort and import this German 3D Blu-ray release. 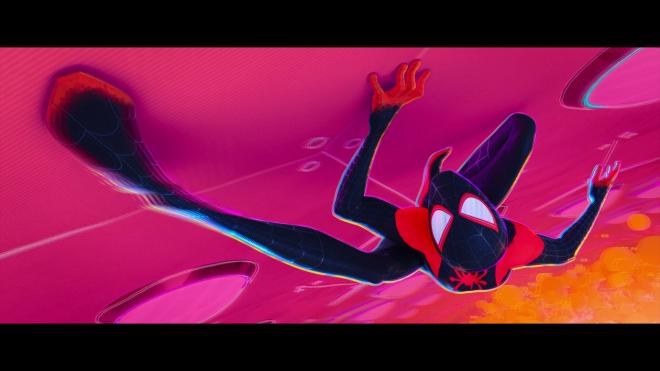 With the amazing animation and the hyper-stylized visual presence to bring the pages of the comic to life, this is a movie that lends itself perfectly to 3D. I'm glad I have this disc also for the simple fact that my viewing experience wasn't 100% ideal. My local multiplex theater is usually great about 3D presentations with nice bright bulbs so you don't normally lose color and clarity. But, sadly, for that first outing in the Spider-Verse, my theater was the small tucked away screen where they put the indie movies no one pays to see or films that were on their way out of theaters. The bulb was obviously old so the screen was darker than normal and then the glasses made it even darker. While this wasn't the worst 3D screening experience I ever had, it came close. On disc, it's great to see everything in such amazing vivid color. While I love the 4K UHD presentation, it's the sharpest and most colorful - the 3-D is a ton of fun.

Now, because this is a German import, it comes with a slight little caveat that some might not be pleased about - but I personally don't think detracts in a serious way. Thought bubbles. Throughout the movie during big key moments when Miles is having an internal monologue, what he says pops up on the screen in yellow boxes. They're not necessary to read because he's literally saying word-for-word what's in the boxes. But they're stylistically cool and give the scenes a lot of extra energy. But here - they're in German. Not English. 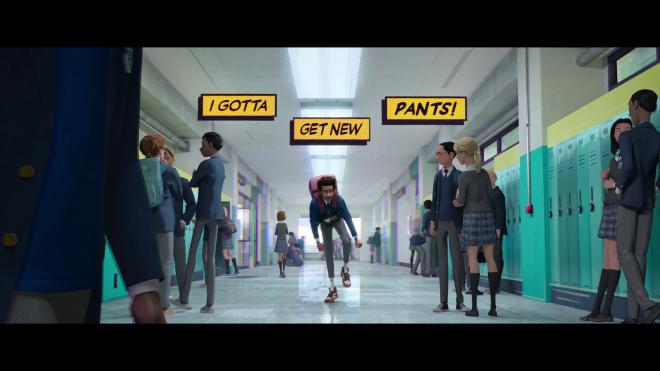 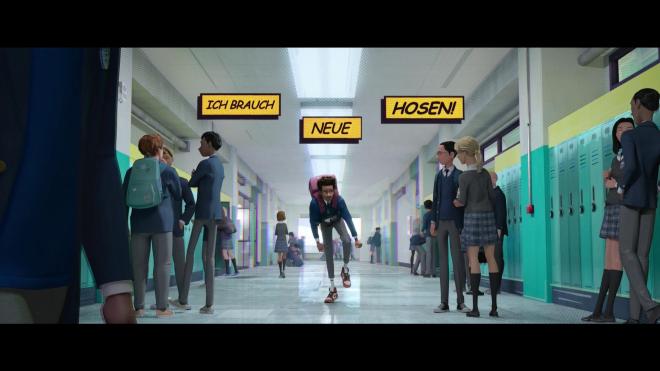 There's no way around it, the standard 2D presentation of this set is like that too. Again, I didn't think this was a deal breaker, I actually think it looks kinda cool in German, but that's the only presentation difference between the North American releases and this German one.

Spider-Man: Into the Spider-Verse lands on 3D Blu-ray in Germany where it's known as Spider-Man: A New Universe which really doesn't have the same ring. But - it's in 3D if you're willing to import it! Pressed on a Region Free BD-50 disc, the 3D version also comes with the standard 2D Blu-ray and is housed in a clear 2-Disc case. The disc loads to an animated main menu with traditional navigation options. None of the bonus features are found on the 3D disc. 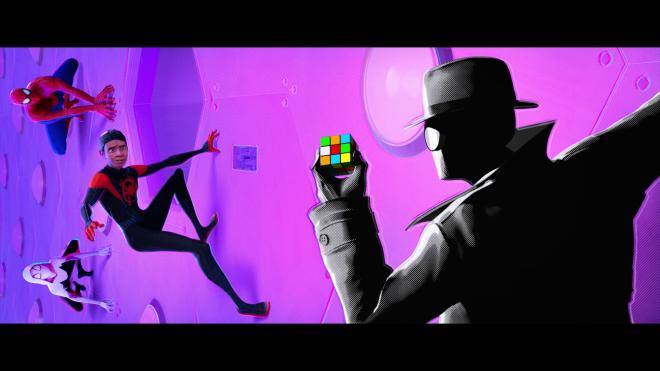 Talk about a movie that lends itself perfectly to 3D Blu-ray! Between the character designs and the effort to recreate the visual comic book experience - there's an incredible amount of three-dimensional activity to soak in with this 1080p 2.39:1 3D Blu-ray presentation. As I detailed in the 4K UHD Blu-ray review - I loved the vivid colors - but the 3D feels like the movie comes to life. The extra depth and dimension to the various elements make sure this image is a virtual feast for the eyes.

While protruding effects out of the screen are relatively minimal, there is some great deep z-axis depth with your screen acting as a window into another world. The scene where Miles and his uncle are tagging a wall in the subway is a great example where some of the spray paint "sticks" to your screen and then everything drips backward - it's a really cool effect! The thought boxes - even though they're in German - pop up and layer into the screen helping establish some extra object depth. The big final climax is a pretty wild show as all of these projection elements come together to complete the picture.

What's also nice to see is that my theatrical experience was not normal. The image has been brightened to compensate for the darkening effect of the glasses. Colors are still bright and vivid giving the image that awesome four-color experience. Now, with the focus effects cooked into the image, there is what I will call faux-ghosting. The blurred lines of side objects and characters not in focus are supposed to appear that way. There isn't any actual ghosting. It's a great three-dimensional experience that I wish was more readily available. 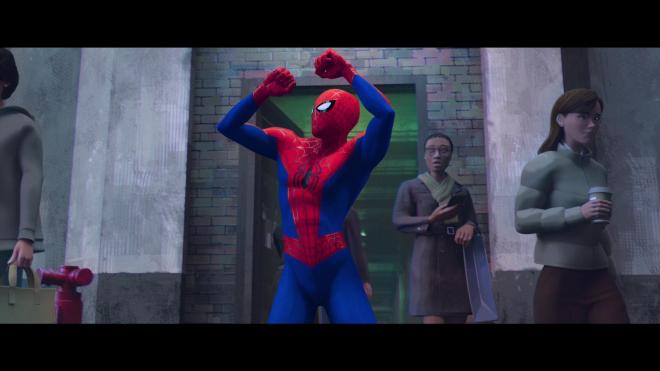 The DTS-HD MA 5.1 mix was previously covered in my standard Blu-ray Review, but here's the quick version. This 5.1 mix is solid -- with clear dialogue, deep LFE, and impressive action sequences -- but after hearing the Atmos mix on the Ultra HD Blu-ray, the 5.1 version seems lacking. 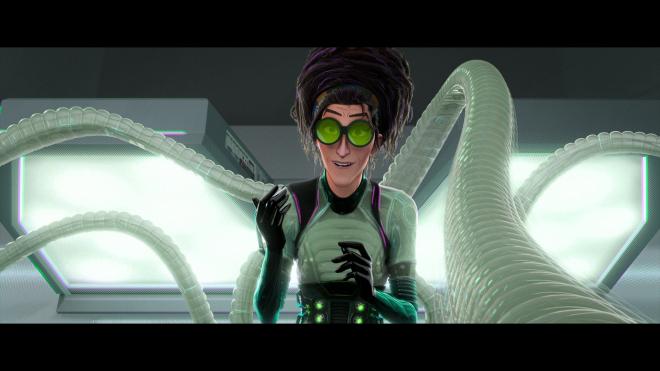 While the menu for the standard Blu-ray is in German, the bonus features are identical. It's a great collection of material worth picking through. 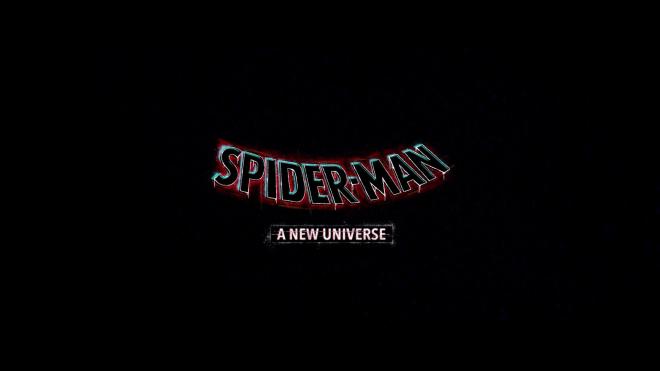 Spider-Man: Into The Spider-Verse - or "New Universe" as it's known for this German release was easily one of the best films of 2018. It was a real surprise to discover how great this movie was in theaters and it's even better now that I can experience it in 3D - with good lighting! The only bummer is you have to go through the hoops and loops of importing it. But at the current Euro exchange rate, the price isn't too steep and the included standard Blu-ray does include the same set of bonus features. While I stand by that this 3D version should have gotten a North American release, I can excitedly say that if you love your movies in all three dimensions, Spider-Verse is well worth importing. Recommended.

Sale Price 15.01
Buy Now
3rd Party 15.01
In Stock.
See what people are saying about this story or others
See Comments in Forum
Previous Next
Pre-Orders
Tomorrow's latest releases