Disowned by its creator, John Woo's 1986 action schlock-fest Heroes Shed No Tears stars Eddy Ko as a mercenary trying to get his team and his family safely through Viet Nam after an operation to capture a drug kingpin goes horribly awry. The action set-pieces are incredible offering an early look at Woo's signature ballet-styled bloody gunfights, but the film's plot and characters are a mess - in all the best ways! Wickedly entertaining from start to finish. Film Movement Classics brings Heroes Shed No Tears to Blu-ray with a solid video transfer, serviceable audio, and an interesting Eddy Ko interview to round out the bonus features. If you love John Woo and you love schlocky 80s action movies, this is an unlikely marriage made in cinematic heaven. Absolutely Worth A Look.

Chan Chung (Eddy Ko) and his team of skilled lethal mercenaries have been hired by the Thai government to go deep into the Golden Triangle and abduct a vicious warlord and drug runner and bring him back for trial. On the way, Chan Chung must rescue his family, save a French woman from an evil Vietnamese general (Ching-Ying Lam) and find a way through Vietnam to safety. I love Cannon Films. Love them. Invasion USA, Enter the Ninja, American Ninja, 10 to Midnight, Death Wish 3 - they're all incredibly entertaining movies - albeit with questionable qualities. For my movie money, Golan/Globus were visionary producers who created a metric ton of entertaining schlock on teeny tiny budgets. They're not traditionally great movies mind you, they're just pure wholesale entertainment. I mention Menahem Golan and Yoram Globus not because they had anything to do with John Woo's Heroes Shed No Tears, but because this film feels like the lost child of Cannon Films. The endless gratuitous violence, nonsensical plot, random side characters, oddly timed humor - all of it feels like something you'd see in a movie starring Chuck Norris or Charles Bronson - not a Chinese market action film from a rising talented director.

Do yourself a favor and dig into the behind the scenes trivia of the making of Heroes Shed No Tears. Reading those stories and watching this movie, you can see why John Woo would practically disown it. He may speak fondly of shooting the movie, but the final result is a fever dream of action movie material. The fact that it's been released at all is only because A Better Tomorrow proved to be a massive hit and Golden Harvest decided to just throw the film into theaters in its current barely finished state. In all honesty, it's all the better that it lives on in this form. Legend has it Woo only did the movie to finish his contract and desperately tried to make a soulless cannibal-war movie mishmash something with an emotional core. What he managed to compile was this bizarro-world hybrid of popular 70s/80s action-horror movies that's light on characters but heavy with gratuitous blood, guts, and gore prominently featured in eloquently shot gunbattles.

In my opening paragraph of this review, I did my real and true best to try and summarize what the heck this movie is about. Truth be told, it's not really about anything. Stuff sort of just happens. The scenes with Eddy Ko's Chan Chung and his family is about the only consistent story thread - and even that is pretty thin material. You can see the future action architect Woo would become with every gunfight - minus the white doves - and there are many, many gunfights in this flick.

As I write this I now realize there is a better way to describe Heroes Shed No Tears in a positive way to encourage action fans to check it out. Take the gunfight from Predator when Schwarzenegger and his team attack the militant compound, dial up the hyper-violence and explosions and bloodletting to 20, and then do that scene about six more times. Each gunfight would be numbing if they weren't executed in such a gonzo slow-mo ballet of blood. When you've got guys going full guns akimbo with grenade launchers and numerous minions burned to a crisp with a flamethrower, you've got a pretty damn entertaining movie - even if it doesn't really make a lick of sense! It's a 2-star plot with 5-star action execution. I'll split the difference and call it a 4/5 - this one is just too much fun.

Film Movement Classics delivers Heroes Shed No Tears to Blu-ray in a single disc set. Pressed on a Region A BD-50 disc, the disc is housed in a standard clear case. Also included is a booklet with a great essay by Grady Hendrix. The disc loads to an animated main menu with traditional navigation functions. The Chinese language track is the default mix. 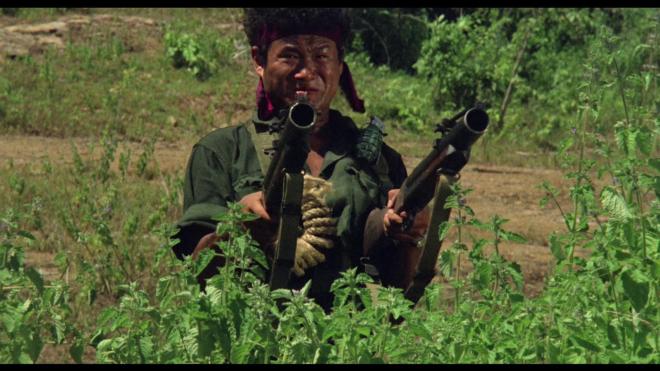 I always step into any Blu-ray release of a 70s/80s Chinese release with a steady trepidation and decidedly marked expectations. When that Golden Harvest logo first shines on screen, I was pretty confident this would be a middling transfer at best where I would struggle to find positive qualities to highlight. As I will now phrase in my regional parlance "Welt, you could say I was wrong about that." While it may be a tinge bright in places, Heroes Shed No Tears enjoys a hearty, robustly detailed 1.85:1 1080p transfer. The first time I tried watching this movie was on a VHS tape that had been magnetized. The second was on what I thought was a region free import DVD but turned out to be a bootleg crappy VHS dub that stopped playing 25 minutes into the movie. Third time was the charm!

Film grain is apparent and appreciable - in parts. I'm chalking it up to filming conditions as there are some shots within the same scene where grain can fluctuate, most notably in slow-mo sequences. There are also a few soft shots here and there where details suffer a bit but nothing overly waxy to suggest that any kind of DNR was employed. The gore effects are pretty damn great and look nicely gnarly on screen. Colors are bright and bold with some great primary pop - the fountains of crimson blood spurting out looks great! Black levels and contrast are for the most part very strong and stable but they fluctuate here and there. One moment we've got some nice inky blacks, the next shot in the same scene blacks take on a softer brown color. Same for whites. One shot they're nice and crisp, and the next they could be blooming like the sun went nova. That said, 90% of the time this is a great looking image - considering it was never properly finished or overseen by the director. 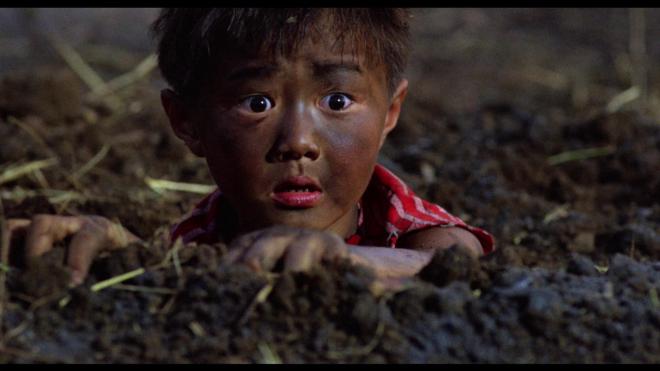 Well, this is pretty wild, Heroes Shed No Tears arrives with six different audio options. Cantonese, Mandarin, and English dubbed DTS-HD MA 5.1 along with Cantonese, Mandarin, and English Dolby Digital 5.1 audio tracks. Right out - you can skip the Dolby Digital 5.1 mixes altogether. They're softer, the dialogue is in the mud, and the big action sequences sound flat. In contrast, all three DTS-HD MA 5.1 tracks offer marked improvements in spacing, dimensionality, and LFE - especially during the many - many - gunfights. The action sequences are where each of these audio tracks comes to life - the canned explosions and gunfire effects land with real impact. Dialogue - while an improvement over the Dolby Digital tracks, is still very soft. Enabling the DTS Neural:X function on my setup helped improve the dialogue quality quite a bit - but even then I still had to keep my levels up higher than normal. Overall the Cantonese and Mandarin DTS audio tracks are where the money is at. The English DTS mix is decent enough but the language dubbing just sounds silly for some of the characters. 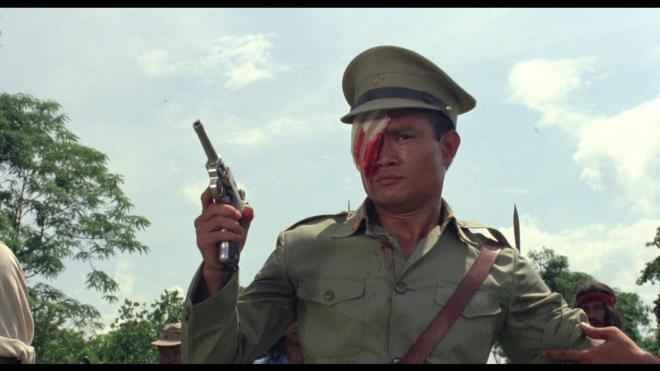 Not much here in terms of bonus materials, but the Eddy Ko interview is solid stuff. Hearing him talk about the movie, it must've been a pretty crazy shoot and he also goes into how he got started as an actor being a stunt double in martial arts films. His details about using live ammunition on set are intense! 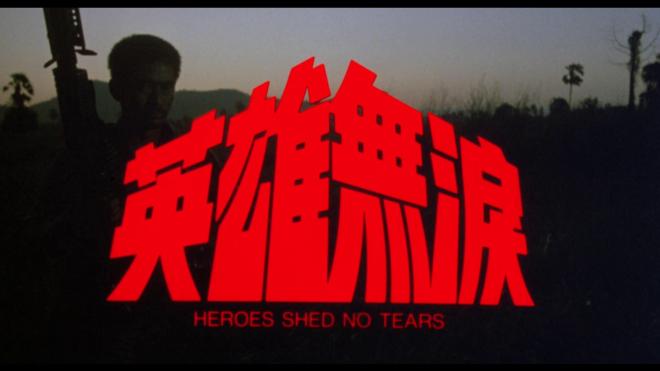 Heroes Shed No Tears may not be John Woo's greatest cinematic achievement, but it's a terrific indicator of the action madness to come in his later career. The human relationships in our action heroes, the slow-mo bullet ballet, the relentless pacing, and the elaborate staging of set-pieces are all on display. It's the sort of madness you can expect from a Chinese action movie shot in Thailand using live ammunition with Korean, French, and Chinese actors with a Japanese cinematographer and a Thai crew all in what would become Woo's signature.

Film Movement Classics delivers Heroes Shed No Tears to Blu-ray in fine order featuring a solid and respectable video transfer. The three DTS audio tracks are the best of the six available - however, be prepared to ride the volume button a little. Bonus features aren't plentiful, but the Eddy Ko interview is great stuff! If you love your action movies relentlessly schlocky with plenty of bloodletting - Heroes Shed No Tears will fit the bill nicely. Worth A Look.