Vice Squad is an insanely violent horror-action film that has no mercy as a pimp, prostitute, and detective are all trying to intersect with murder and mayhem. It's a thrilling ride for sure and Scream Factory has done this movie justice by releasing it as a Collector's Edition. The new 1080p HD transfer is the best this film has ever looked and the mono audio track delivers within its limits. There are over 337 minutes of bonus features. That will be repeated. There are over 337 minutes of bonus features related to the making of the movie. HIGHLY RECOMMENDED! 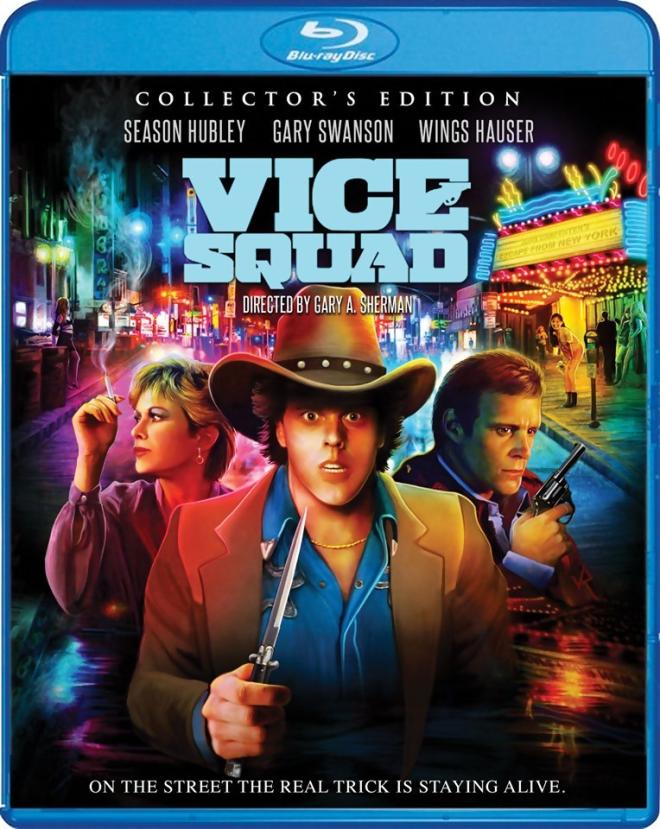 So a pimp, a prostitute, and a police detective walk into a bar. It sounds like the start of a bad joke or what could be a really good time with names like Princess and Ramrod, but in the case of 1982's action-horror film Vice Squad, that's not always the case. In fact, this is a super sexualized crime thriller with some hardcore violence and one rough bad guy. This movie is the culmination of the late 70s and early 80s that brought together a ton of top-tier talent, which is funny because this movie is so over-the-top violent, that it's unbelievable it was ever made and released. Gary Sherman directed this pic, who previously just came off Dead and Buried and went onto make Poltergeist III. He was joined by producing partner Robert Rehme (former president of Avco Pictures who helped make a ton of John Carpenter movies, including The Fog and Escape From New York). Also collaborating with this duo was cinematographer John Alcott, who had previously worked on four of Stanley Kubrick's best films, including 2001: A Spacy Oddessy, Barry Lyndon, The Shining, and A Clockwork Orange. Rounding out this stellar crew of talent is composer Joe Renzetti (Child's Play). While the story may be a standard grindhouse B-movie affair, the visual style, camera angles, and score are out of this world.

Vice Squad was originally made to be a TV series based on the real-life experiences of a Los Angeles police officer, which looked at many different aspects of the criminal world of Southern California. Sherman thought it would work better as a shorter movie and cut the story down to prostitution and murder. This is where a pimp named Ramrod, played incredibly by Wings Hauser (father of Cole Hauser of Dazed and Confused and Good Will Hunting) is introduced. Ramrod is not above committing severe physical abuse to his harem of ladies, as the movie gives a first-hand look at him using a wire coat hanger on an unlucky working lady in more ways than one.

Meanwhile, there is a prostitute by the name of Princess (Season Hubley), who is a mother by day and who is now working with law enforcement to bring Ramrod to justice. Early on, Ramrod is captured, but he soon escapes and is out to find and brutally kill Princess. Now the police, led by detective Tom Walsh (Gary Swanson), must find Ramrod and Princess before the two of them cross paths.

Where Vice Squad still succeeds more than 35 years later is with the magnificent visuals of the crime-ridden streets with neon signs lighting up the night sky, and where all various walks of seedy criminal life come out to play for a few hours a day. The film also knows exactly what it is and never tries to be anything more. It never preaches a message or tries to have an underlying theme. Even the protagonist Princess tells the audience that these nasty streets will never change and to just accept this way of life.

With the setup and mix of sex, rough violence, and revenge, one can easily see a glimmer of Martin Scorsese's Taxi Driver, where a Travis Bickle might be taking his vigilante role to a start on the streets. That's evident here with Princess and Walsh. But with Vice Squad, it's more of a straight and narrow path of revenge than it is of trying to change the world. Hauser, Hubley, and Swanson all turn in excellent performances here, with Hauser standing out with his psychotic rendering of a psychopath who thinks he can get away with anything. Vice Squad can still produce its thrills and excitement many years later.

Vice Squad hunts its way to Blu-ray inside a Collector's Edition from Scream Factory. The disc is housed in a hard, blue plastic case with a cardboard sleeve. There is some fantastic new artwork for the film that features the characters of the film while the reversible cover art has the original poster art for the film. 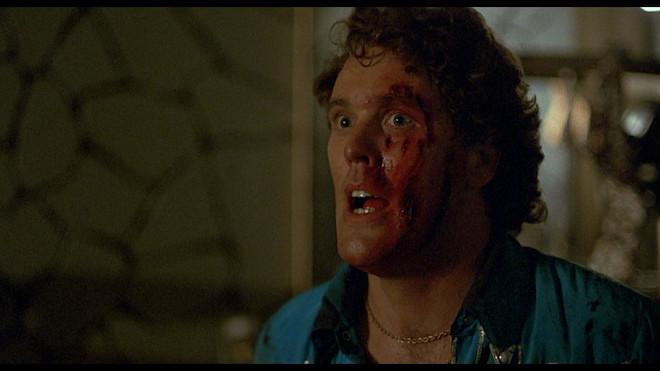 It's always fun looking forward to these vintage releases to see how well these 30 something-year-old films hold up with new transfers. Scream Factory usually hits a home run in this department, and this new 4K scan of the original film elements is no different. Vice Squad looks better than ever with this fresh 1080p HD transfer that breathes new life into the color palette and detail of this 1982 film.

The opening scene of the picture is a montage of b-roll footage of the sordid life on the night time streets. Neon signs of porn theaters, bars, and cafes open late-night populate the scenery with a fantastic richness. The glow from these signs are bold and stand out nicely against the dark alleys and backgrounds. The colorful pimp suits all have a crisp hue as do interior settings. When inside a hotel or apartment room, the natural browns, greens, and more earthy like tones have significant upgrades where we can now tell the different shades of color on props and set dressings. Red lipstick and blood are more pronounced as are the many different black levels at night and in shadowy corners. They are jet-black and striking. Skin tones are more natural and never overly saturated like in previous releases.

The detail also has a noticeable uptick where heavy makeup blemishes show up more, practical makeup effects of gore and wounds show the fine details in their slashes and markings. Individual hairs, wrinkles, and those comprehensive wardrobe textures all are visible now. It's like watching the film for the first time. Wider shots also look cleaner as well, which gives the claustrophobic maze of the city streets some needed depth. Lastly, there were no major issues with banding or aliasing, although there was still some dirt and debris in a couple of moments, that added to the nostalgic and filmic aspect of this older, violent movie. 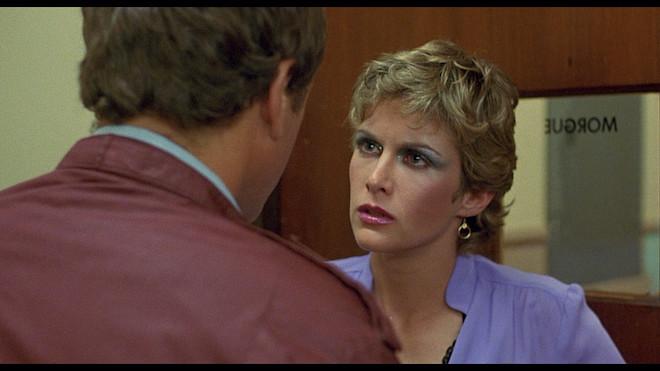 Scream Factory delivers a DTS-HD MA Mono track that has plenty of power for a gritty action/crime film. The one wish would be to also include a 5.1 audio mix as well. In that case, one could hear the car chases, gunshots, and other wild sound effects travel through the speakers, as well as a more immersive atmosphere of the city life in the rears. Still, this Mono track packs a punch where it counts.

Vehicle engines rev up to a robust roar and gun blasts sound off with vigor, however, there isn't a big low end to add any heft to the soundscape. Sound effects of punches and kicks to the flesh, along with doors opening and slamming shut all have a decent impact but are never startling. Sounds on the street of people talking, as well as police radios, bar clientele, and other music all sound well-balanced, but again, it's all focused on one channel. Dialogue is clean and never has a tin can sound, while the impressive score always enhances the suspense of each scene. 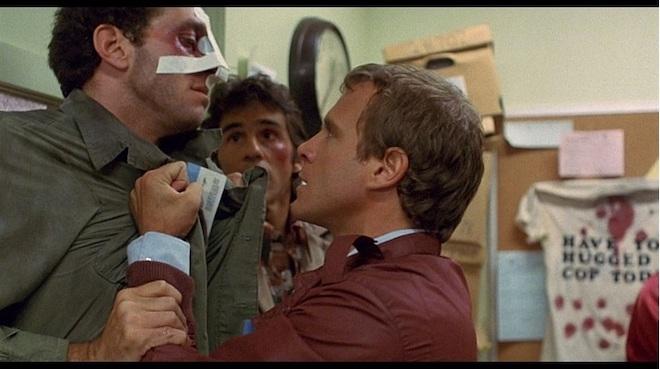 Holy Moly! There are 337 minutes of bonus material here. That is NOT a typo either. A guess would be that everyone wanted to talk about the film and Scream Factory obliged them. There are six interviews in total with the cast and crew that give way to some fun and interesting stories of working in Hollywood. Rounding out the interviews is a skippable location extra, trailers, and image gallery. It's always a good time when a huge list of comprehensive extras is included, but six hours of just talking head interviews can cause a coma. 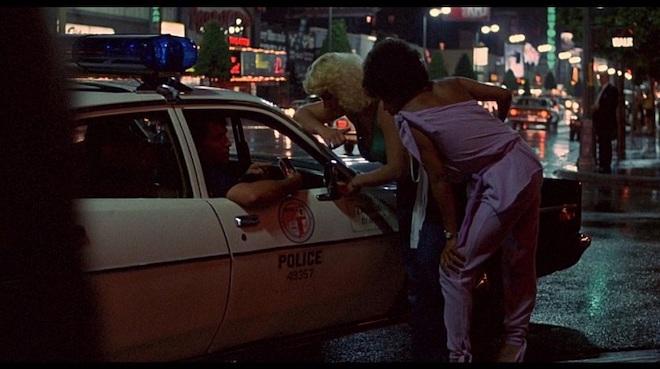 Vice Squad is a savagely violent film set in a chaotic city where crime and prostitution are rampant. The filmmakers honestly tell this tale of revenge and justice with some good performances and one top-notch crew. The film still holds up to this day if you can stomach the brutality. Scream Factory gave this cult hit a wonderful new transfer, kept its original Mono audio track, and delivered over six hours of bonus content. This is a spectacular release and comes Highly Recommended!