Christopher Lee dons the black cape for the first of many appearances as a blood-sucking vampire in 1957's Horror of Dracula. This film also marks the first time Lee would headline a film alongside his Hammer horror co-conspirator Peter Cushing as the determined vampire killer Dr. Van Helsing. It's a loose adaptation of Stoker's novel, but it's a gory good time with that delightfully bright red tempera paint blood! Warner Archive brings Horror of Dracula to Blu-ray in fine order with a colorful and well-detailed transfer that is only sidelined by some occasionally crushed black levels. The sound mix is on point and delivers. Bonus features are sadly nonexistent. All the same, it's great to have this movie on Blu-ray in North America, fans should be pleased with the overall results. Recommended.

The classic tale of Bram Stoker's immortal bloodsucker lives on with Christopher Lee donning the black cape, fangs, and blood packets as Count Dracula, a mysterious nobleman who has lived in the depths of Transylvania for centuries. Intent on ending Dracula's reign of terror over the lands, Jonathan Harker (John Van Eyssen) travels to Castle Dracula under the false pretense of being a librarian answering a job request by the count. When Dracula uncovers Harker's ruse, he seeks revenge by attacking Harker's fiancé Lucy (Carol Marsh). As Lucy's health declines, her sister Mina (Melissa Stribling) and brother Arthur (Michael Gough) are at a loss. Only Harker's colleague Doctor Van Helsing (Peter Cushing) can save them - that is if he's not too late. 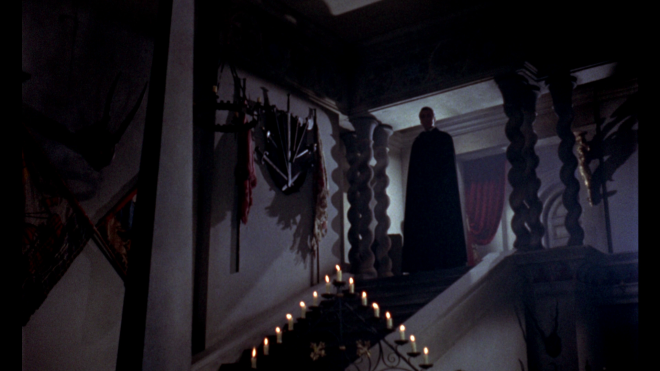 As a very loose adaptation of Bram Stoker's classic novel - Horror of Dracula is a hell of a fast-paced bloody good show! A number of liberties have been taken to quicken the plot and move things along. Various character relationships have changed, events are flipped around, and even locations moved to accommodate the necessities of the swift 82-minute run time. While feeling like a pseudo-CliffsNotes adaptation only touching the major highlights of the book, the film is a bloody good time and one of my favorites.

The first of Hammer's Lee vs. Cushing Dracula films, it's easily the best. As the titular vampire had been so prominent throughout the 1930s and 1940s thanks to the iconic Bella Legosi, I appreciate that the Hammer crew wanted to mix things up a bit beyond just adding color to the show. On top of speeding up various plot points, I like that Lee's Dracula has almost nothing to say - he has all of maybe seven lines in the entire film. His creepiness builds from his stature and piercing stare. When he goes full vampire, it's horrifying! That first shot of him with his bright red eyes, open fanged mouth, with blood pouring down his chin is still shocking and unsettling after all these years.

Coupled with Lee we get Peter Cushing's iconic take on Van Helsing. Cushing gave Van Helsing this spry almost action hero persona, a fighter that is savvy enough to think on his feet - even if that means placing two candlesticks together to create a makeshift crucifix. I also love how he carries the room as the smartest man there and shows his exasperation when anyone questions his authority. It's a terrific quality that he'd later utilize in Hammer's Hound of the Baskervilles adaptation.

It'd been a while since I'd last seen Horror of Dracula in a single sitting and it was great to reconnect with it. Warner Archive did a solid job with the presentation so it's nice seeing it in such great shape. It would have been cool to see the restored gory death scene footage that was found in Japan and available on the UK release, but that's just a small quibble as this original theatrical release is still great stuff. I have a lot of memories of my dad renting all these movies when I was a kid, it took me some time in my later years to figure out which memory went with what movie, but Horror of Dracula was always a highlight every Halloween.

Horror of Dracula rises from its North American DVD crypt to Blu-ray courtesy of Warner Archive Collection. Pressed on a BD25 disc, the disc comes housed in a standard sturdy case. The disc loads to a static image main menu with traditional navigation options. 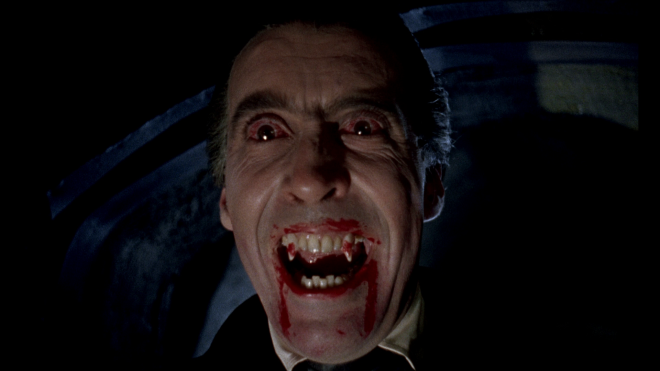 Horror of Dracula is given a beautiful 1.66:1 1080p transfer with crisp details and bold beautiful colors but gets a knock from overly aggressive black levels. But let's start with the overwhelming positives. First - details are amazing for this release. I grew up watching crappy TV broadcasts and VHS tapes and I was never really impressed with the old DVD after renting it a couple times. It's nice to see fine facial features, the rich costuming, and the impressive production design come to life. This transfer is especially impressive in daylight scenes or well-lit interiors. Fine film grain is apparent without being noisy or intrusive without any sign of smoothing. Whites are crisp and the image has a terrific sense of depth to it. According to WB's press release, this release underwent quite a bit of color work and the source elements were cleaned and restored to remove film-related damage. It's a beautiful effort - however - it's a stop or two too dark.

That isn't to say this image is oppressively dark and you can't see anything, but in dark shadowy scenes - especially in the depths of Dracula's castle - crush does seep into the show and keep you from fully appreciating the image. It's particularly troublesome with Dracula given his dark clothing. Anyone wearing black becomes a bit of a floating head. Again, this isn't overly terrible just a problematic anomaly. I'm just used to seeing more detail in Dracula's basement when Harker makes his gruesome discovery but even then the newly intense shadows do add some extra creepiness to the scene. Even if it's a tad dark, the brief crushed blacks aren't severe enough to keep you from enjoying the movie as I feel the numerous positives outweigh any negatives. 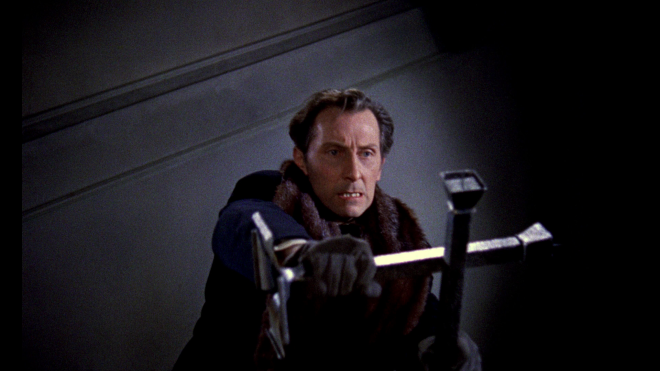 Horror of Dracula gets a little extra audio oomph where it counts with a moody and effective DTS-HD MA 2.0 mono mix. One of the things I've always loved about Hammer films is their use of sound and how they use small sounds like wind or echoing voices to add just a little extra bit of atmosphere to the mix. It's not a lot, but these movies get a lot of mileage out of being quiet. When things go full blast complete with screams of terror and the fantastic score by James Bernard, the mix handles everything perfectly. Dialogue is clean and clear without any issue - it's always great to hear Christopher Lee introduce himself as Dracula! Levels are pitch perfect and don't need any adjusting. 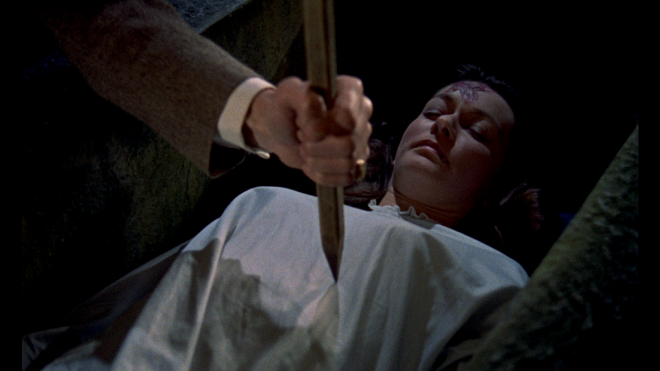 Unfortunately, no genuine bonus features were sourced for this release. The only thing we get here is a faded washed-out trailer - which is actually a nice comparison piece to showcase the main film's restoration work, but that's it. It's a shame WA wasn't able to license the bonus features available on the UK release. 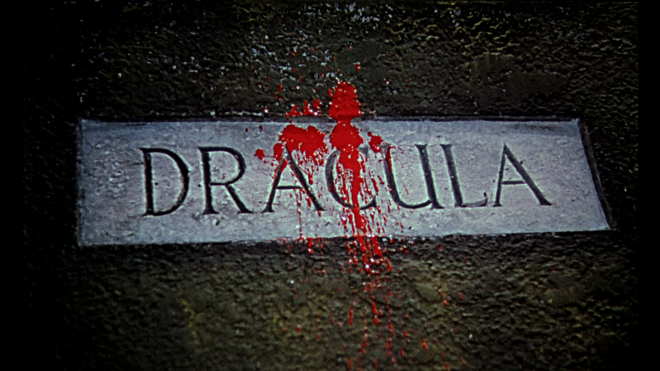 Christopher Lee and Peter Cushing ignited an incredible working friendship with Horror of Dracula. Together they made this Hammer horror classic a lively if loose adaptation of Stoker's seminal novel something exciting and different from anything that came before. With several sequels, Horror of Dracula spawned an impressive franchise of bloody-good vampire flicks - but this one remains the best beast of the bunch. Warner Archive digs Horror of Dracula out of the North American DVD grave for a solid Blu-ray release. The recently restored image transfer breathes new life into the colors and is well detailed - even if the black levels are a little less than desirable. The audio mix is top notch letting all the screams of terror echo through your sound system. Sadly bonus features are a bit of a bust. At the end of the day, I'm calling this release Recommended. It's a great looking release and the film is a classic that I'm glad to finally own on Blu-ray in North America.

Sale Price 17.99
Buy Now
3rd Party 12.6
In Stock.
See what people are saying about this story or others
See Comments in Forum
Previous Next
Pre-Orders
Tomorrow's latest releases