Monster and sci-fi B-movie lovers delight as The Mole People dig their way up from DVD to Blu-ray thanks to Scream Factory. Starring genre favorites like John Agar, Hugh Beaumont, Nestor Paiva, and Cynthia Patrick, this flick features some terrific genre hokum with impressive production design, great creatures, and plenty of stock footage! The video transfer looks great, the audio has never sounded better, and the bonus feature package is a solid effort and includes the hilarious MST3k episode! The Mole People is a collector's delight on Blu-ray! Recommended.

"The thing that impresses me the most is complete and utter silence. You can almost hear it."

As I look back at how much a part of my life The Mole People has been, I honestly can't figure which I saw first, the incredibly hilarious MST3K episode or this film un-riffed and free of commercial break cuts. Either way, it's a favorite. Made on the cusp of Universal International's slide into cheap B-movie sci-fi plots with bloated usage of stock footage, The Mole People aims to be an earnest examination of 1950s social-political climate buttressed by an impressive amount of stock footage. While the effort had the best intentions, the flick itself is a cheesy cornball ride featuring an incredibly pompous know-it-all John Agar laying on a thick layer of smarm. 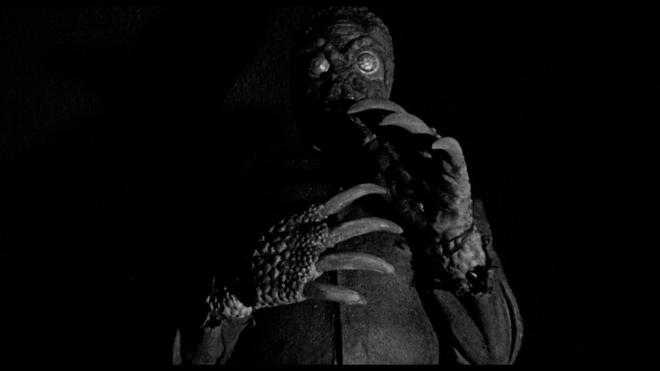 Archeologist Roger Bentley (John Agar) and his team Jud Bellamin (Hugh "Beaver's Dad" Beaumont), and Professor Lafarge (Nestor Paiva) make an incredible discovery in Asia - an oil-lamp dictating the last vestiges of ancient Mesopotamia and their possible survival of the great flood on top of a mountain. When Bentley and his team climb the peaks to investigate, they discover a race of albino Mesopotamians thriving deep in the depths of the mountain who survive because of their mutant Mole Men slave labor. Stuck thousands of feet below the surface, the archeologists must find a way out before the evil High Priest Elinu (Alan "Alfred the Butler" Napier) has them killed.

After a string of A-picture science fiction features such as The Creature films and This Island Earth, Universal International was looking to cut costs and a few corners in their productions to maximize profits. The first victim of this plan was the rather smartly conceived but ham-fisted The Mole People. With the pasty albino lords of the underworld and their dark-looking mutant slave labor force the Mole Men and their cast of undesirable "marked ones" like Adad played by Cynthia Patrick, the script by László Görög is actually a pretty smart scrape at American race relations of the era. Like great science fiction, it works as a parable, and there are some genuine moments of thoughtfulness. However, a lot of that good effort is spoiled by how cheap the film is.

For a 78-minute show, The Mole People possibly only has about 60-minutes of actual movie in it. The rest is comprised of obvious stock footage and a rather hammy introduction by Doctor Frank Baxter to give the film's plot a sense of credence. When the plot isn't actually moving along, most of the dialogue time is John Agar's character essentially stating and restating how much smarter he is than everyone else. What was genuine becomes instantly hammy - and a true science fiction B-movie classic!

In the basic sense of plot structure, pacing, and characters, The Mole People struggles - especially in the home stretch when a specific character dies because of some perceived notion about interracial relationships. But, it's wildly entertaining all the same. First time director Virgil Vogel moved from being the editor for films like Touch of Evil to directing features and he does a decent enough job. You can tell his creative hand was limited by studio mandates, but he knew how to keep the action moving and how to make great use of the movie's monsters. And the monsters are great! The Mole Men were designed by the legendary effects master Jack Kevan who designed the creatures in Creature From the Black Lagoon, This Island Earth, and Abbot and Costello Meet Dr. Jekyll and Mr. Hyde.

Like I said at the outset, I can't honestly say which I saw first - The Mole People in its uncut glory or the MST3k episode, just the same I can say that I've probably spent too many hours of my life enjoying this sci-fi gem. It's not the best Universal International title, one can easily argue it marked the decline of Universal's science fiction and horror-focused offshoot. Even with its cheapness and silly plot contrivances, the film is a good run. Agar sells it with every speech he gives while Alan Napier delivers a particularly sinister bad guy with Nestor Paiva comically going full deadweight load. So long as you don't expect something of the caliber of It Came From Outer Space, you should have a great time with The Mole People.

Scream Factory digs deep and yanks out The Mole People onto Blu-ray in a single disc set. Pressed onto a Region A BD-50 disc, the disc is housed in a standard sturdy Blu-ray case featuring reversible artwork. The disc loads to an aspect ratio selection screen 1.85:1 or 2.00:1 with identical static image menus and navigation options. 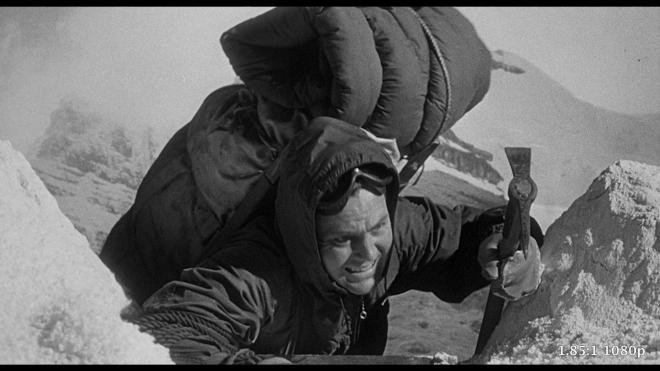 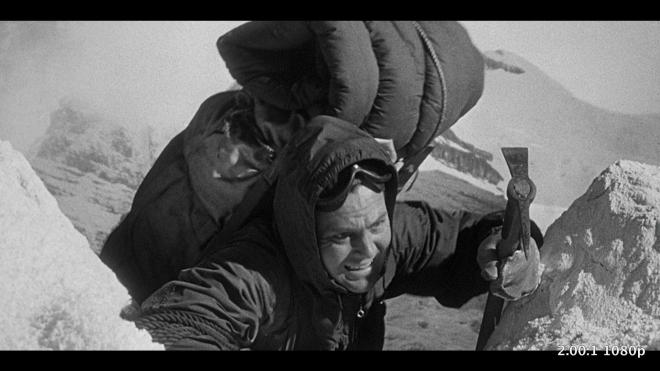 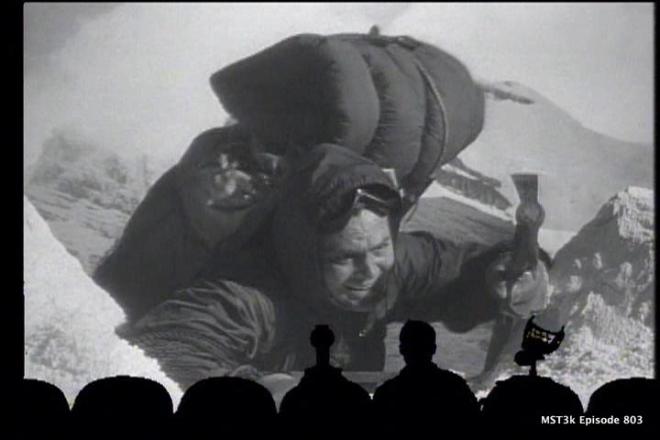 I can't swear by the vintage of the transfer sourced for this 1080p presentation of The Mole People, but aside from some speckling - damn does it look great! Scream Factory decided to offer the film in two aspect ratios 1.85:1 and 2.00:1 - with the included MST3k episode covering the more common VHS and television appearances in 1.37:1. In terms of the 1.85:1 or the 2.00:1 aspect ratios, there really isn't that vast a difference. The 1.85:1 offers a little more top and bottom spacing while the 2.00:1 shaves the tops and bottoms ever so slightly. You're really not seeing anything new or missing anything in either framing. Both look great so it's dealers choice.

Fine film grain is apparent without ever becoming noisy or intrusive. Details are sharp and intricate allowing for extra scrutiny of details in clothing, facial features, and the interesting yet very cheap-looking production design. The added resolution shows the production did their best to blend the stock footage with the film's but there are some pretty obvious misses - especially in the switch from wide establishing shots to close-ups of the cast. But that's a forgivable charming piece of the film. 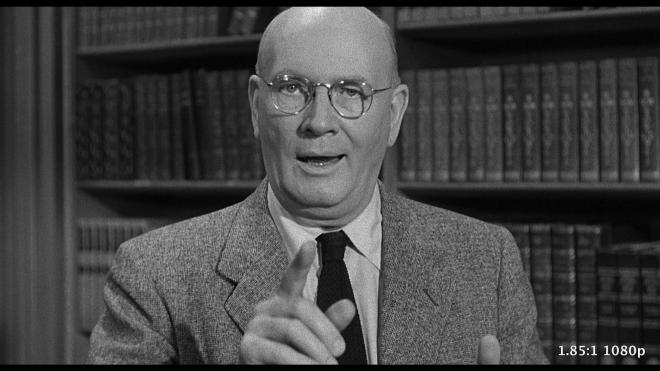 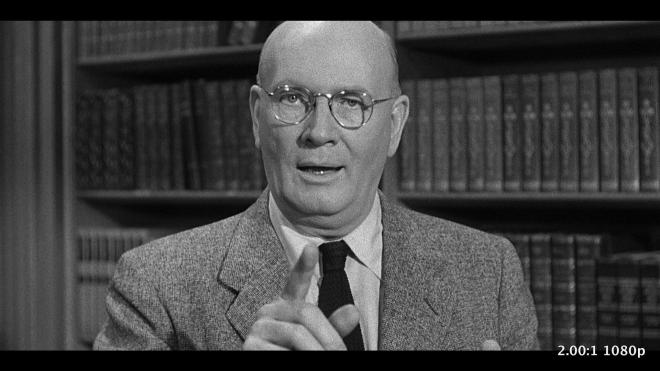 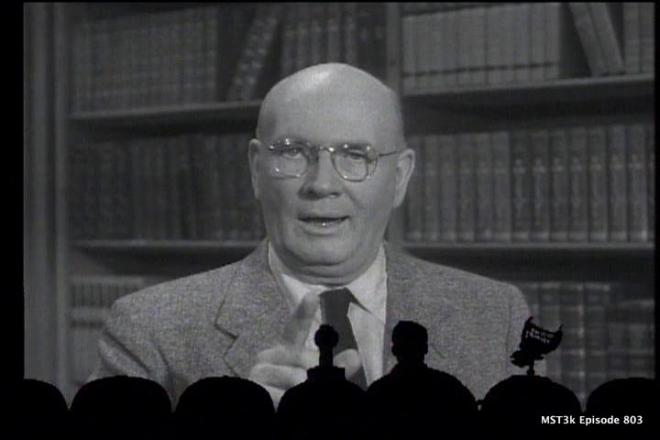 Black levels and grayscale are wonderful allowing for deep creepy inky black levels to soak into the image with plenty of shadow separation providing the extra three-dimensional kick. Whites are crisp without blooming and there isn't any notable sign of black crush anywhere. As far as print wear and tear, there is a fair bit of speckling throughout and it's more noticeable in darker sequences. The stock footage has thicker speckling and more pronounced scratches and hairs. Free of any banding, speckling really is the only damage to report and in all honesty, it's forgivable. This movie looks great - far and away better than the old tapes, DVD, and MST3k releases! This gives me great hope for what Scream Factory is cooking up for their upcoming releases of The Deadly Mantis and Tarantula. 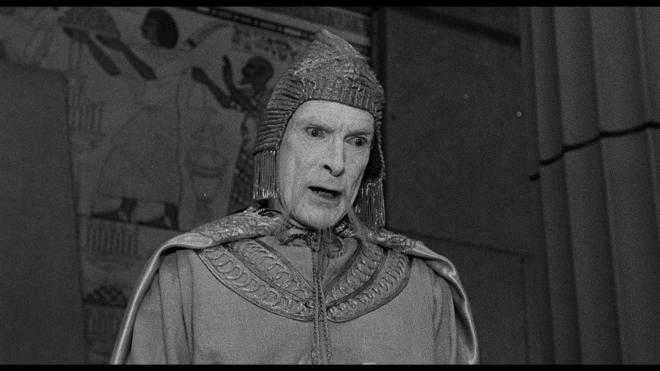 The Mole People crawls out of the dark with a terrific DTS-HD MA 2.0 mono track. Between MST3k and the old DVD from Universal, I'd gotten pretty used to muddy dialogue and shrill library music, so I wasn't expecting much from this mix. Thankfully it sounds crisp, clean, and natural. Dialogue is clear and never an issue. Sound effects are much more pronounced now allowing for some great imaging even in the restrained scope of the sound design. The main fight sequences and event the overlong and awkward rope climbing sequence offers up some great atmospheric effects. Hiss is never an issue and the mix is free of breaks, snaps, or dropouts. 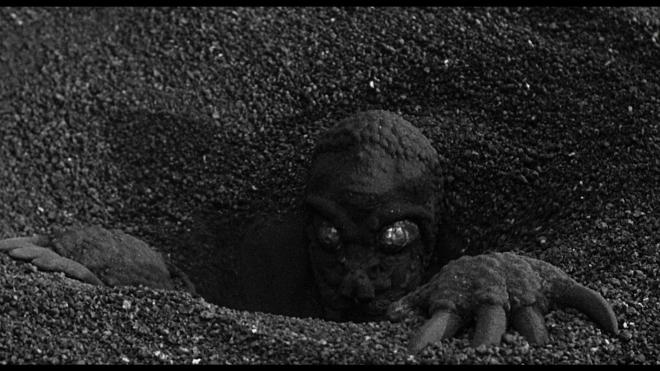 While not a "Collector's Edition" release, Scream Factory has seen fit to give this release a few decent and worthwhile bonus features. The new audio commentary track featuring film historians Tom Weaver and David Schecter is a fine anecdotal piece as the pair offer up a wealth of information about the film, production, and its place in Universal International's impressive library of fun sci-fi films. The other main highlight is the included MST3k episode from the show's 8h season when they moved to the Sci-Fi Channel and it's a true classic with some of the best jokes - mostly all made at John Agar's expense. Scream Factory also brought over the very informative featurette that was available with the MST3K DVD. 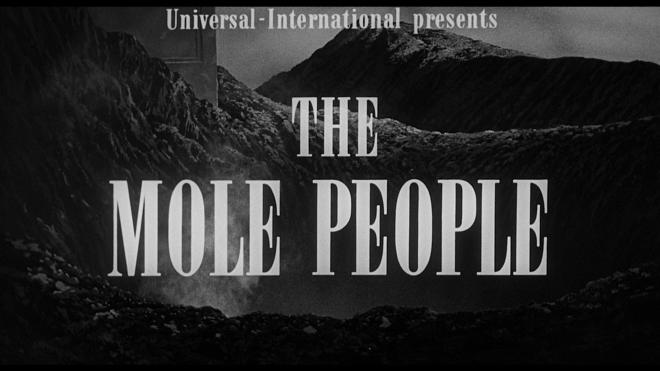 The Mole People may not be a prestige science fiction flick like The Day The Earth Stood Still or Invasion of the Body Snatchers, but it's a classic piece of sci-fi B-movie cheese. Featuring genre stalwart John Agar at his pompous best, the film loses hold of its smart allegorical storyline under the weight of stock footage, recycled sets, and a rushed production. But hey, at least the mutant Mole Men look amazing and is another classic monster in the Universal menagerie of monsters! Scream Factory delivers The Mole People to Blu-ray in terrific form with a beautiful video transfer, a fantastic audio mix, a fun little bunch of bonus features including the classic hilarious MST3k episode. If you love great B-Movies, it doesn't get much better than The Mole People - Recommended.

Sale Price 17.99
List Price 27.99
Buy Now
3rd Party 28.26
In Stock.
See what people are saying about this story or others
See Comments in Forum
Previous Next
Pre-Orders
Tomorrow's latest releases