Director/Star Ray Milland' traditional western A Man Alone with generic plot beats succeeds at sticking to traditional tropes while proving to be far better than average. A great cast including Mary Murphy and Ward Bard, with sinister performances by Raymond Burr and Lee Van Cleef, turn something run-of-the-mill into exciting and suspenseful. It may not be the greatest western ever, but it's damn entertaining. Kino Lorber Studio Classics delivers A Man Alone to Blu-ray with a strong video transfer and a good audio mix to match. Bonus features are light but the audio commentary is worth a listen. Recommended.

Ray Milland is Wes Steele - an infamous gunfighter with a reputation for a quick draw and an honest heart. In the desert, his horse goes lame. Stranded, he comes across a massacred stagecoach with women and children dead. As he tries to return to town to report the crime, he's accosted by the acting sheriff (Alan Hale Jr.). Shooting him in self-defense, Steele flees as the town forms a mob lead by Mr. Stanley (Raymond Burr) and his right-hand man Clanton (Lee Van Cleef). Forced to take shelter in the basement of the ailing Sheriff Corrigan (Ward Bond) and his daughter Nadine (Mary Murphy). As the mob conducts house to house searches, Steele must convince Nadine and the Sheriff he's not only innocent of the massacre but the suspicious death of the town's banker. 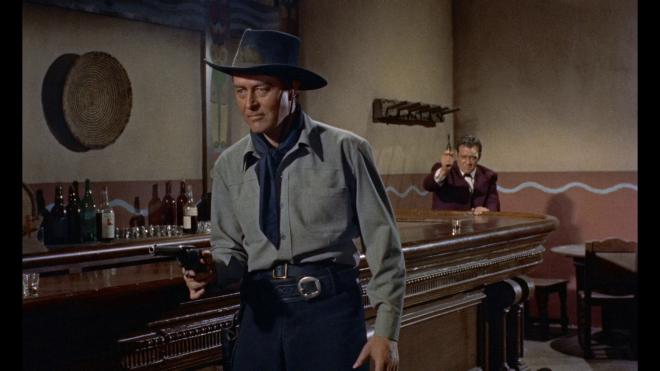 As his first time in the director's chair, Ray Milland proves that he's skilled behind the camera as well as in front. A Man Alone isn't dramatically original or too much of a workout when it comes to storytelling, but by keeping to the basics the film stands on its own two feet and proves a good aim in a standoff shootout. If you're a fan of westerns you've seen the story of the outlaw with an honest streak who gets into a hell of a lot of trouble and has to shoot his way out against terrible odds - this is that movie again, but it has its own subtle moves in the territory to make it stand out.

The cast is what makes the flick. Milland is an adept lead and is able to play the heavy nicely while still having a heart. His exchanges with Mary Murphy and Ward Bond allow him to show a soft side while his play time with Burr and Lee Van Cleef shows he's capable of being the stone cold hardass. The story beats are by the book, there are few surprises, but it's how the movie gets from point A to point B that makes it worth the while. Plus, it's also a lot of fun to see Raymond Burr play a bad guy and Lee Van Cleef is always a welcome presence in any western with that steely-eyed stare of his.

A Man Alone certainly isn't the greatest western ever made or the most original, but it gets enough right to be solid entertainment. I wasn't quite sure what to expect with this one going in, I'd only seen Milland in a couple of films, but I was pleasantly surprised. At a brisk 96-minutes, the film doesn't sell itself short nor does it overstay its welcome. It proved to be great entertainment. Uncomplicated, to the point, but fun just the same.

A Man Alone arrives on Blu-ray courtesy of Kino Lorber and their Studio Classics label Pressed onto a Region A BD-25 disc, the disc is housed in a standard sturdy Blu-ray case. The disc loads directly to a static image main menu with traditional navigation options. 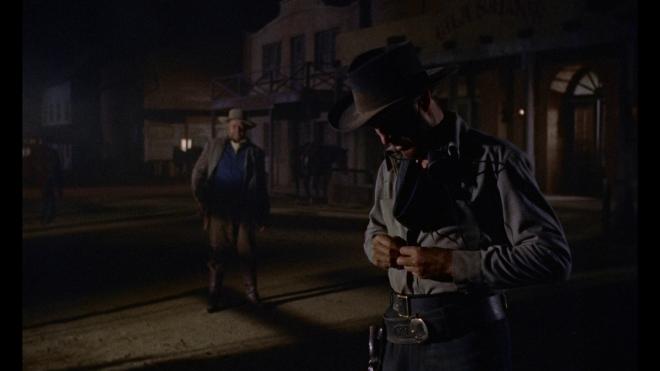 When you watch A Man Alone, it's important to keep in mind the difference between a new 4K "Scan" and a 4K "Restoration." Reportedly featuring a new 4K Scan of the original Trucolor negative and positive separations, A Man Alone sports a beautiful 1080p 1.66:1 transfer - that still shows its age. Details are strong with crisp lines allowing you to soak in the desert location, the rustic western production design, and fine facial features. The aftermath of a sandstorm provides some notable sandy dusty accents to costuming. Colors are vivid with bright and bold primaries. Skin tones are healthy and accurate. Black levels are nice and inky giving the image a notable presence of depth. Where the score gets a little iffy is in the condition of the elements sourced for this transfer. While the scan is terrific, it could have used some restoration work. Mild speckling is apparent throughout without being too intrusive. There are some heavier patches here and there with some brief appearances of vertical scratches, but they never last for very long. It's a movie with an attractive face that just has a few blemishes. 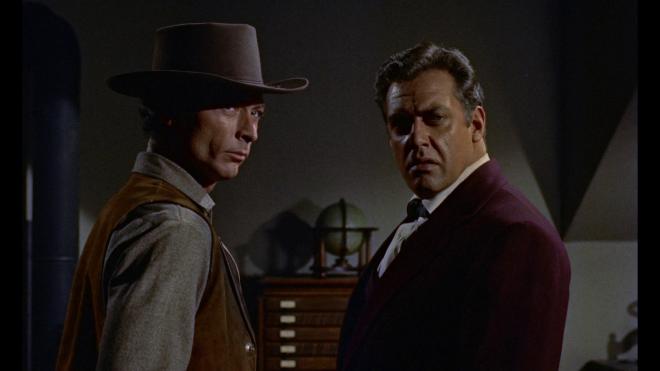 A Man Alone Sports a strong DTS-HD MA 2.0 mono mix that more or less takes care of business. The nature of the film itself doesn't call for much in the way of dynamic atmospherics, much of the action takes place in small rooms with just a handful of characters to fill with dialogue. Sound effects and the traditionalist score by Victor Young round out the mix nicely keeping things active without dead patches. Dialogue is crisp and clean and there isn't much in the way of audible age-related anomalies. A patch or two of hiss and that is all. Overall the mix is good, it's just not earth-shattering in any way. 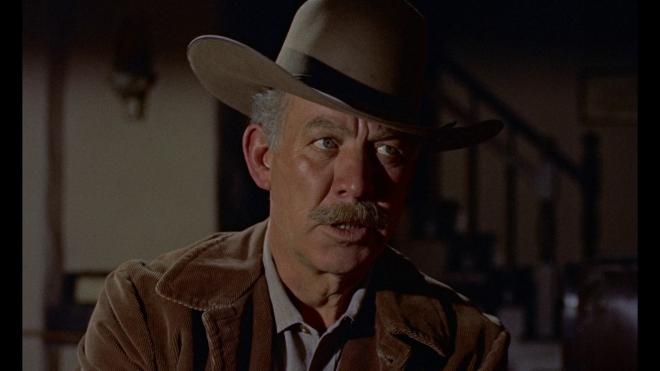 A Man Alone wasn't given a huge package of bonus features, the typical KLSC trailer collection is present, but the inclusion of a commentary track by Film Historian Toby Roan is a good listen. 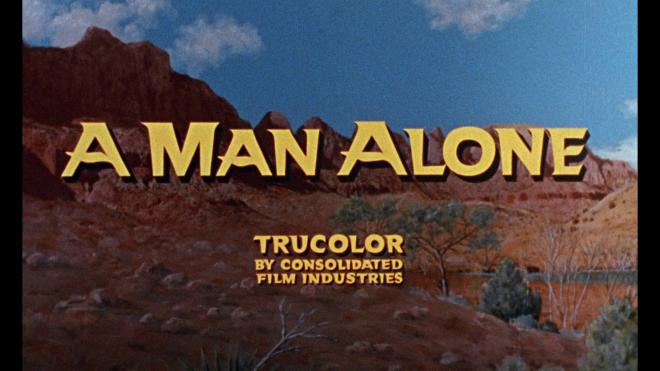 A Man Alone certainly isn't the most original western ever made, nor is it the best - but that doesn't keep it from being good. Milland's first outing as a director proves the man had talent in front and behind the camera. He's a strong leading man and his cast members play to the traditional tropes while still finding ways to stand out. I love a good western, and this was a good one. Kino Lorber Studio Classics brings A Man Alone to Blu-ray in fine form with an aged but still impressive video transfer, a reliable audio mix, and a worthwhile commentary track. It's a good time so if you're tempted, give it a spin. Recommended.