The Gunfight at Dodge City

The whole west watched... and held its breath! Western Icon Joel McCrea (Fort Massacre) stars as the legendary gunslinger "Bat" Masterson in this handsomely mounted production that should delight the eye of any western fan. Fleeing to Dodge City after killing a man in self-defense, Masterson finds his brother Ed (Harry Lauter) running for sheriff of the town. When Ed is killed by hired guns of the corrupt incumbent, Bat is determined to settle the score with violence, but he is convinced by the townspeople that the best way to avenge his brother's death is by taking Ed's place on the ballot. Bat agrees and wins the election, but his new role on the right side of the law will lead him to unexpected confrontations as he finds himself torn between his loyalties to his friends and his duties as sheriff. Stylishly directed by Joseph M. Newman (This Island Earth) with a stellar cast that includes Julie Adams (Creature From the Black Lagoon), John McIntire (Two Rode Together), Nancy Gates (Comanche Station), Richard Anderson (TV s The Six Million Dollar Man) and Timothy Carey (The Killing).

"What is it that makes a man want to wear a badge?"

Part of the reason why westerns were so popular through the 1950s was they were steeped in legend. Tall tales of the west helped pave the way for people from the Atlantic to push their way towards the Pacific. As the railroads sprung up, and boomtowns sprouted around, legendary figures like Wyatt Erp, Wild Bill, and Buffalo Bill Cody and their exploits became widely known. So when film and television took off in the 20th century, these characters made for easy and bankable exploits. Westerns were also ridiculously cheap to produce so when you have prefabricated sets and a famous name like Bat Masterson, a movie capturing his exploits is a sure bet. 1959's 'The Gunfight At Dodge City' directed by Joseph M. Newman and starring Joel McCrea, Nancy Gates, and  Julie Adams is a simply classic style western that actually does a pretty decent job of adhering to historical facts.

For buffalo hunter Bat Masterson (Joel McCrea), this hunt was to be his last. With a pile of hides in his wagon, he's shuffling his buffalo off to Dodge City where his brother Ed is the City Marshal. Ed is a straight as an arrow honest lawman who does what he can to earnestly keep the peace from rabble rousers. As Bat soon learns, Ed is in a whole heap of trouble as crooked Sheriff Jim Regan (Don Haggerty) essentially controls the criminal element forcing saloons and stores in the city to pay for "protection." Ed has stirred up a hornets nest by running against Regan in the upcoming elections. While he could use Bat's help, Bat has other interests in mind, namely buying a stake in the Lady Gay Saloon from a woman by the name of Lily (Nancy Gates).

When Ed is gunned down in cold blood, Bat effectively dispatches the assassins - but now he wants the man who sent them. Knowing it was Regan who set it up and proving it are two different things. While he could stay a saloon owner and turn a fantastic living, revenge fuels Bat's heart and he takes his brother's place in the election. Easily winning the tin star, Bat now finds himself front and center of a fight he didn't start but is ready, able, and willing to do what it takes to finish it. 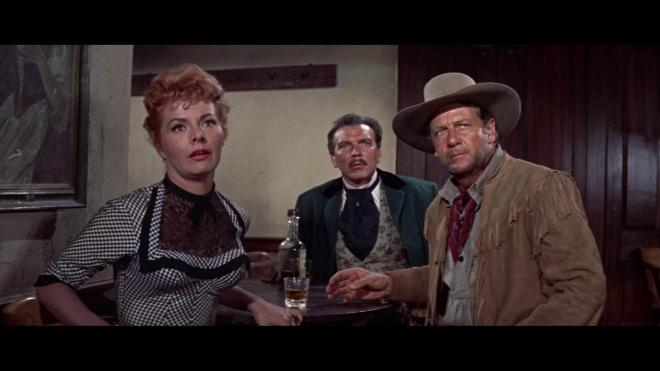 Westerns that feature the exploits of famous cowboys or lawmen of the Old West are a dime a dozen. Since the main character is long dead, there's no one to stop a producer and writer from creating a fanciful version of history. In the case of 'The Gunfight At Dodge City,' it would appear that the filmmakers actually took their time to get the broad strokes of historical events true to history. Sure, some of the finer details may not be as sharp or accurate as they could be, but that doesn't keep this film from being a rousing good bit of action and adventure entertainment.

At the lead of this picture is veteran western actor Joel McCrea as the famed lawman Bat Masterson. As a strong tall guy, McCrea does a fine job at portraying a dedicated lawman with few words and a fast draw. As an actor, he lets Bat be a man conflicted by duty, honor, and in the case of this film, love for Nancy Gates' Lily and Julie Adams' Pauline Howard. Ironically, McCrea is about the only historically inaccurate piece of this film as he's about twenty years too old to be playing Bat Masterson. The supporting cast with the previously mentioned Nancy Gates and Julie Adams as well as John McIntire as Doc Tremaine, Richard Anderson as the deceitful Dave Rudabaugh, and Don Haggerty as Jim Regan are all strong additions to the film.

For a film that runs at a swift 81-minutes, it manages to pack in a lot of action as well as its share of drama. The romantic conflict between Bat and Lily and Pauline feels a bit tacked on, but considering the era that this film was made, it's to be expected. Every cowboy picture has to have a pretty lady for the hero to sweep off her feet, so why not have two of them? All around, 'The Gunfight At Dodge City' is a pretty good film. Not a great one mind you, but one that is entertaining and should please genre fans.

'The Gunfight At Dodge City' arrives on Blu-ray thanks to Kino Lorber and their Studio Classics line. Pressed onto a Region A locked BD25 disc, the disc is housed in a standard case and opens directly to the main menu.

For a film that probably hasn't seen much in the way of restoration and remastering work, this 2.35:1 1080p transfer for 'The Gunfight At Dodge City' actually looks pretty good. Fine film grain is retained throughout and offers up some pleasing detail levels - that is, under certain conditions. Some early day-for-night shots don't offer up much detail, and there is a prevailing softness to the sides that can make the image appear a bit soupy. Part of that has to do with the Cinemascope process where the sweet spot is in the middle foreground, so if an actor leaves that strike zone, they tend to go out of focus. Thankfully the rest of the film looks great. Daylight scenes in particular look impressive, offering up plenty of detail, rich color saturation, and inky blacks that sport a lot of depth. For a bare bones release of a film that isn't a high priority run, this is actually a very colorful and pleasing transfer. Not perfect, but still darn good.

With a DTS-HD MA 2.0 audio track, 'The Gunfight At Dodge City' sounds good.  Again not great, but pretty good. Part of the issue with this track is some clarity. While dialogue can easily be heard 90% of the time, that other 10% is victim to louder sound effects like gunshots or crowd noise and the film's sweeping score by Hans J. Salter. Thankfully this doesn't create any kind of rattling distortion or other dissonant sound effect, it's more like the audio loses some punch in those moments. The rest of the time the track feels lively and robust. Like the video, without some serious restoration and remastering work, this is the best the audio will likely ever be - but that isn't exactly half-bad either.

For a good old fashioned reliable western, 'The Gunfight At Dodge City' is a quick and easy source for solid entertainment. This isn't a perfect film by any means, but then it doesn't try to be. Kino Lorber has brought the film to Blu-ray with a reliable A/V presentation and only some trailers for extras. If you want a fun western that doesn't take up too much of your time, consider 'The Gunfight At Dodge City' as worth a look.

Sale Price 21.87
Buy Now
3rd Party 20.19
Usually ships within 2 to 3 weeks.
See what people are saying about this story or others
See Comments in Forum
Previous Next
Pre-Orders
Tomorrow's latest releases