Tucker: The Man and His Dream

Tucker: The Man and His Dream is an earnest tribute to a man whose inspirations were ahead of his time, and whose work might have revolutionized the automobile industry. While the movie looks great, and is filled with appealing performances, the characters and the storytelling are too lightweight for the biography to have any historical resonance. This is yet another work by Director Francis Ford Coppola where style is more evident than substance, but yet the overall entertainment value is sufficient to warrant a mild recommendation.

Tucker: The Man and His Dream is an affectionate, but overall slight biography released in the late 1980s.  The screenplay focuses on Preston Tucker, an individual determined to introduce a new kind of car to the American public but who faces all sorts of trials and tribulations in realizing his dream. As an underdog in the automobile industry, this sort of drama should have been endlessly fascinating, with many opportunities for grandiose storytelling. However, the movie ends up a mild disappointment. Considering the talents of a director like Francis Ford Coppola, I expected something approaching cinematic greatness (perhaps not the level of Apocalypse Now or The Godfather movies - and yes, I am including Part III), but instead ended up with surprisingly superficial, contrived entertainment. The film is hampered by Hollywood cliches, including one-dimensional, stodgy, old corporate executives and politicians who are only slightly less caricatured than Mr. Potter from It's a Wonderful Life, as well as a climactic courtroom scene where treacly, but eloquent speeches by Tucker himself substitute for effective closing arguments. When the court erupts into cheers after the delivered verdict, it is obvious that our emotions are being shamelessly manipulated.

Still, Tucker's storytelling is straightforward and there are many enjoyable moments. The viewer is exposed to the technical problems and logistical frustrations in trying to build his "car of the future" not to mention how big business (specifically, the "Big Three" automobile manufacturers before American adopted imports) and even bigger government get in the way of visionary entrepreneurship. The "Tucker Torpedo" boasts some innovative features, including an engine in the rear of the vehicle, seatbelts, swiveling headlights, but its construction leads him into trouble with charges of defrauding investors, losing control of his company, and having his name and reputation dragged through the mud. However, despite the doubting Thomases, the soulless capitalists, and the apologists for the status quo, Tucker manages to turn his vision into a limited reality.

Jeff Bridges plays Preston Tucker with exuberance, though the story hides any sense of flaws or personality issues. We are told that Tucker spends more money than he makes, but are never shown any negative effect on his home life. Instead, he is just another idealized protagonist. Joan Allen plays his supportive and strong-willed wife, and Christian Slater plays his wise-beyond-his-years older son. Their family unit seems to have less conflict than the Brady Bunch, and while it may be an accurate portrayal, it sanitizes the main characters considerably. Opportunities which may have given more insight to the Tucker (reference is made to one of his crew members, who is of Japanese ancestry and whose family was placed in the World War 2 internment camps) are presented, but rarely explored.  We like Tucker (he intoseems like a talented and upright individual) and we're always on his side, but never get a true feel for the man himself.  It's like seeing a high school kid's book report come to life.

Balancing out these shortcomings are the performances of the supporting cast. Martin Landau is very good as Tucker's financier, as are Mako and Frederick Forrest as members of Tucker's crew.  Dean Stockwell also puts a memorable and curious appearance as Howard Hughes, an unlikely advisor to Tucker. Their scene seems almost incidental to the main plot, although their interaction is very memorable, thanks to the impressive photography which keeps the main characters in shadows as the Spruce Goose looms suspended in the background. This is definitely one movie where another fifteen minutes or so of character interaction may have added to depth and substance to Tucker's story. 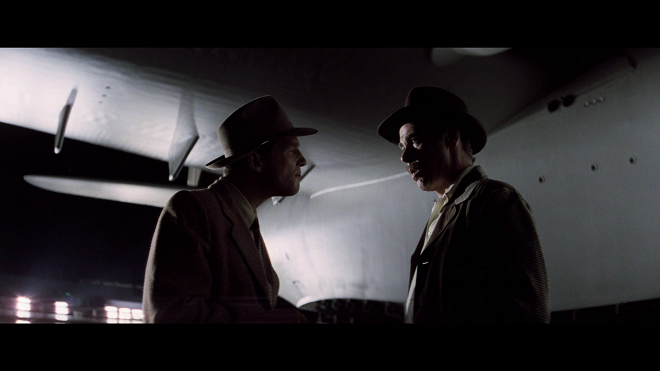 Therefore, it's not too surprising to note that what elevates Tucker from becoming just another cable TV biography is Mr. Coppola's stylish direction, greatly aided and abetted by the photography of Vittorio Storaro.  As explained by the director in the supplemental materials, the film relies on sweeping camera work, split screens, and smoothly edited transitions to tell the story.  Some segments border on camp (the car chase scene between the police and Tucker in his dream machine seemed particularly out of place) while others could use some more details (the court room scenes are handled so breezily and superficially that it makes My Cousin Vinny look positively realistic), but again, the movie never fails to keep our attention.  For a project made with such ambition, skill, and respect, it's too bad that the end result is just another "feel good" film.

This "30th Anniversary Edition" Blu-ray from Lionsgate is presented on a single platter BD-50 in a standard keepcase. The cover art is a new eye-catching design from any previous home video release.  A paper insert provides instructions for a digital copy.

Tucker: The Man and His Dream is presented in an aspect ratio of 2.39:1 encoded in AVC/MPEG-4.  For a thirty year old movie of modest success, I expected a visually competent release, but was caught by surprise by the warmth and detail of this high-definition presentation.  Scenes in Tucker's country home are filled with browns and greens, and it's been a while since I've seen such colors captured so accurately.  In short, the video looks great.

Even under critical viewing, I was unable to nitpick any flaws in either the source or its transfer. Film fans can definitely appreciate legendary cinematographer Vittorio Storaro's sumptuous camera work, making this period piece look just right for its time and setting. It is refreshing to see a movie look like film, and not some over-produced digital concoction spit out by someone's gaming computer.

Tucker: The Man and His Dream sounds nearly as good as it looks thanks to it's 5.1 Dolby TrueHD soundtrack.  Most of the scenes are dialogue-based, where clarity and articulation are a must, and this Blu-ray certainly delivers.  Most of the voices are kept to the center channel, instead of being spread out across the front, but directionality is rarely important when it comes to cinematic conversation.

The soundtrack comes alive during the very few action scenes, including a car chase where Joe Jackson's soundtrack blasts along revving motors and squealing tires. It won't have the same headache-inducing effect as a Fast and Furious film (thank goodness), but it's enough to show off how dynamic this soundtrack can be.

Although I do not normally do this, I cross-checked some customer reviews of this Blu-ray release, with a common complaint about the audio being unbalanced or inconsistent, especially when it came to dialogue.  I did not experience any such problems while listening to the 5.1 soundtrack, and even went back to listen to several select passages to see if I was listening critically enough.  My opinion still stands that considering its time, Tucker sounds great on Blu-ray with well-mixed music, dialogue, and sound effects.

Tucker is a heartfelt love letter to an unsung American visionary from an equally formidable director, but the end product is a blandly mainstream portrayal.  Reflecting back on the movie, I can only recall the main character as being an upbeat businessman and a family man but not much more than that. If it weren't for the supplementary materials, I might have lost interest in the subject matter within minutes after the rolling of the credits. The overall lack of complexity results in a film which resonates less than it should, making repeated viewings unlikely despite its style and production design. However, for a night's entertainment, and a welcome break from those endless superhero films (Supergirl excluded, of course), Tucker: The Man and His Dream is still worth a look.