Since its first day of release, John Boorman's Exorcist II: The Heretic has had a reputation as one of the biggest disasters in cinema history. As the successor to an all-time great horror classic, the film is indeed a very lousy sequel. Even judged as a movie in its own right, it's still a mess. However, despite what you may have heard, it's not entirely without merit. Boorman aspired to make something worthwhile and interesting, even if he failed.

Hoping to rehabilitate the movie's image, or at least provide it a chance at reappraisal, the new Collector's Edition Blu-ray from Scream Factory offers both the reviled theatrical cut and a shorter version that chops out about 15 minutes, rearranges the remaining pieces, and plays a little better in some respects. Both have been remastered, and the set also includes some new supplements to help viewers make sense of this notorious flop. At the end of the day, it's still not a very good movie, but the picture's small cadre of defenders and other fans of the franchise should be happy to replace the lousy Blu-ray that Warner Bros. put out in 2014. For Fans Only.

The studio's promotional campaign repeatedly asked, "It's four years later… What does she remember?" What audiences remembered was that The Exorcist had been a tremendous worldwide phenomenon, a record-breaking blockbuster, and a multiple Oscar nominee widely regarded as the scariest film of all time. That's a tough act to follow. Nevertheless, success that enormous begs for an encore. Unfortunately (though perhaps wisely for them), neither director William Friedkin nor writer William Peter Blatty wanted anything to do with a cash-in sequel. As a result, the task of making Exorcist II eventually fell to John Boorman, a pretty smart if erratic filmmaker who'd been acclaimed for his movies Point Blank and Deliverance, but who was at the time just coming off the bizarre sci-fi fiasco Zardoz.

The tremendous failure of his last picture made Boorman a very unexpected choice for the job. That movie was seen (before later cult re-appreciation) as a huge black mark on his career. Moreover, Boorman reportedly hated The Exorcist and considered it a work of child exploitation. If he were to helm a sequel, he wanted it to be less a continuance of the original film than a corrective against it. He didn't even want the word "exorcist" in the title at all. Somehow, the studio heads at Warner Bros. got on board with this plan to subvert their biggest hit ever, though they insisted on keeping the franchise name.

The plot of Exorcist II: The Heretic follows a new priest, Father Lamont (Richard Burton), who's assigned by the Vatican to investigate the famed exorcism in Georgetown. This brings him in contact with victim Regan MacNeil (Linda Blair), now a teenager who appears to have her life together. Regan claims to have no memory of her possession and seems to be genuinely happy most of the time. None of that registers with Lamont, who insists based on no evidence that the demon Pazuzu is still inside her. He's so convinced of this that he embarks on a globe-hopping quest to trace the demon's roots in Africa and its connection to an event in the past of original exorcist Father Merrin (Max von Sydow).

Released in 1977, Exorcist II was savaged by critics and was a notorious box office bomb. It's often cited as one of the worst sequels of all time, if not one of the worst films of all time. Some of that hyperbole is overstated. Boorman made a legitimate attempt to expand upon the story and themes of the original movie while taking them in a new direction, rather than simply spitting out a carbon copy. His intentions were admirable. Sadly, his execution was lacking. The sequel is badly crippled by a lot of hammy acting, the inclusion of ridiculous pseudoscience involving a far-fetched hypnosis synchronizer machine, and some incredibly cheesy and misguided dream and fantasy sequences. Worse, the movie is simply very dull, and that's a difficult sin to forgive. 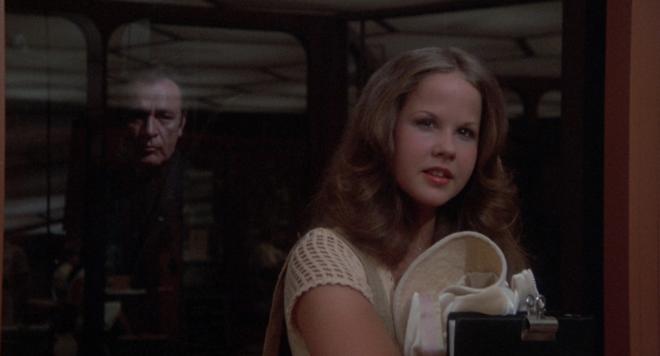 That the film wasn't working became evident quite quickly. Disastrous audience reactions from its premiere screenings prompted Boorman to cut about seven minutes of footage as a running change while the movie was still in theaters, bringing its run time from 117 minutes to 110. Later, he took an even heavier hand in whittling it down to 102 minutes for its international release and home video. For many years, the shortest cut of Exorcist II was the only version kept in circulation for anyone to see.

In some ways, the short version is a legitimate improvement. It removes some of the most laughable and/or baffling moments and picks up the turgid pacing a bit. To be blunt, most viewers will appreciate that it mercifully gets the movie over with sooner. On the other hand, its editing is often extremely jumpy and confusing (though that's no less true of the long version), the addition of a new prologue cobbled together from still frame photos from the original movie is borderline incompetent, and some of the excised bits contained important thematic material that viewers who do like the movie (and a few of those do exist) will regret losing.

After years of availability only in its short version, John Boorman's original 117-minute cut of Exorcist II was eventually restored for DVD in 2002, and later appeared on the Blu-ray that Warner Bros. released in 2014 as part of the Exorcist: The Complete Anthology box set (alongside a standalone copy). During that window of time, the long version became the de facto standard and the short version disappeared from public view.

The new Collector's Edition of Exorcist II from Scream Factory includes both the 117-minute "Original Cut" and the 102-minute "Original Home Video Cut" on separate discs. This marks the first appearance of the latter on disc-based home media. The intermediate 110-minute version that the majority of viewers would have seen in theaters in 1977 has never been released on home video to my knowledge. The two discs are stored in a keepcase with a reversible cover insert, one side featuring the original poster art and the other a newly commissioned drawing of locusts that may not be great, but is a hell of a lot better than the travesty Scream Factory inflicted upon The Exorcist III. Initial copies also have a cardboard slipcover with the new art.

The 2014 Blu-ray edition of Exorcist II released by Warner Bros. was, frankly, awful. The image on that disc was dull, muddy, swamped in heavy grain, and soft to the point of being out of focus. It looked like a very old high-def master that originated from a poor source. For the Collector's Edition, Scream Factory promises that both versions of the movie have been remastered from new 2K scan(s) "from the original film elements." Exactly which film elements those are is not specified, nor is it clear whether both were derived from the same scan edited to conform to the different cuts of the movie, or if separate scans of separate elements were needed. From information gleaned in one of the audio commentaries, I gather that the original camera negative could not be used for this Blu-ray.

Wherever it derives from, the Collector's Edition is an improvement over the prior Warner Bros. Blu-ray, but it's not quite the revelation some fans may have hoped. I focused most of my viewing this time on the short 102-minute version, but also sampled the 117-minute cut, and they look pretty comparable in quality to my eye during scenes where they share footage in common. The 1.85:1 image is still frustratingly grainy and soft, and in fact doesn't seem to have much more detail than the older Warner disc, but it does have better contrast and colors (especially reds).

The sad fact is that Exorcist II is a victim of some of the worst cinematography fads of its day. The movie was shot on grainy film stock, is frequently under-lit, and employs soft focus to an almost aggressive extent. With all that in mind, the Collector's Edition upgrades the movie from the painfully ugly Warner transfer to something at least watchable. 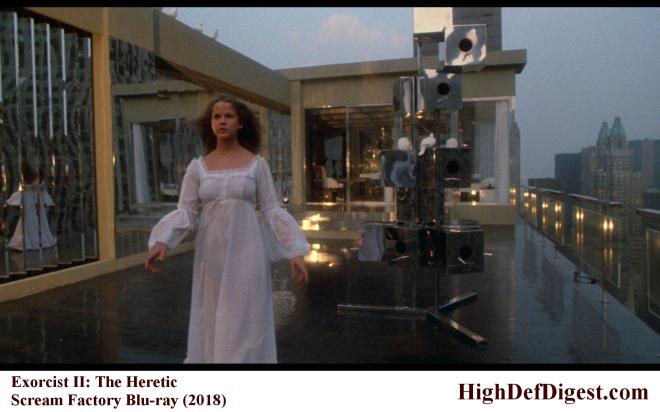 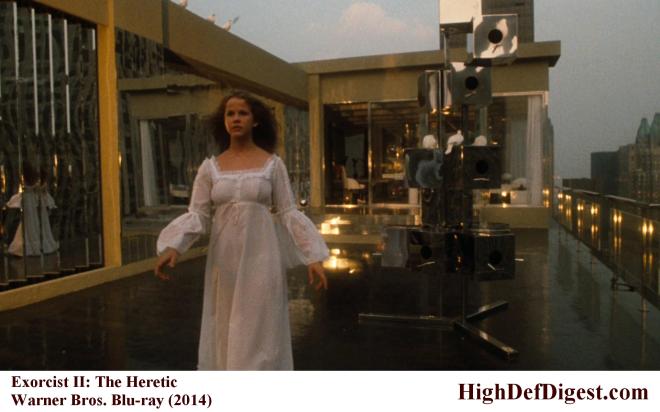 The sound quality is also improved a modest amount. The Warner Blu-ray was very weak with lousy fidelity. Scream Factory's DTS-HD Master Audio 2.0 mono track is clearer and less shrill. While dynamic range is still limited, the fascinating Ennio Morricone musical score comes across better, with a little bit of bass in cello and other stringed instruments.

The movie has an interesting sound design that attempts some unusual effects in places, but at other times sounds weirdly canned and sterile, as if all the room tone were accidentally sucked out. The ADR dialogue also frequently stands out as disconnected from the on-screen content. 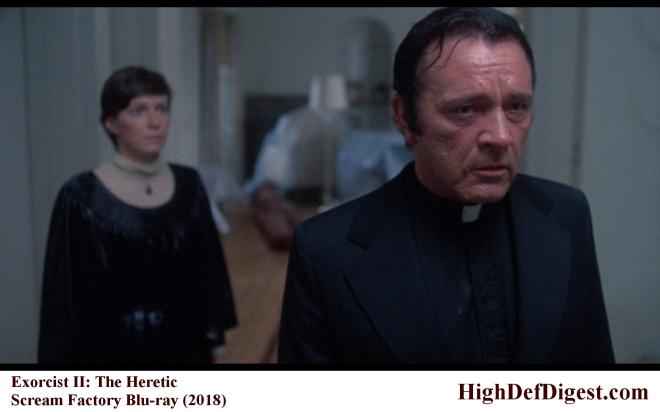 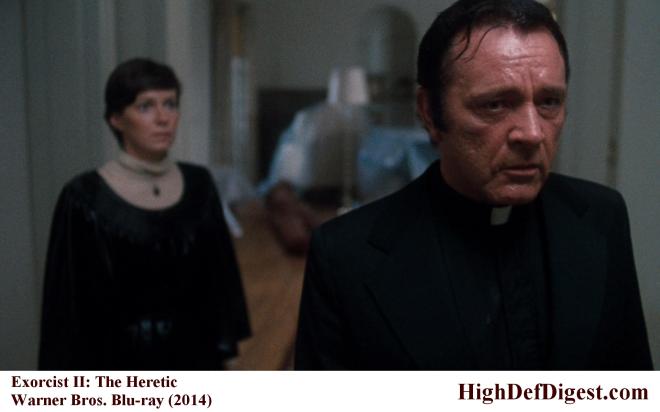 The 2014 Blu-ray had few bonus features, offering only an alternate opening scene (incorporated into the Home Video Cut here) and a couple of trailers. Scream Factory put a little more effort into the bonus content. 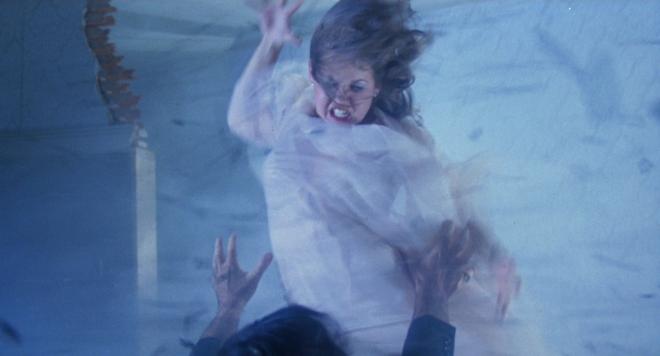 While The Exorcist remains a stone-cold classic, the rest of the franchise that followed it is comprised of more bad movies than good ones. Most viewers would consider John Boorman's Exorcist II: The Heretic the worst of the lot. That reputation isn't entirely fair. It's a very flawed movie, but it's also very ambitious, has some quite interesting qualities, and concludes with an exciting climax that Steven Spielberg liberally cribbed for the ending to his later hit Poltergeist. I wouldn't call it a secret masterpiece, but the movie deserves slightly better treatment than it has received over the years.

In that regard, the Scream Factory Collector's Edition tries to do right by the film by providing two different versions of it, backed with some decent supplements. Unfortunately, the video and audio quality are still quite underwhelming, despite being remastered from unspecified original film elements. I fear there may not be much more than can be done with the movie, but fans will at least find this a worthy step up from the last Blu-ray that Warner Bros. put out four years ago.

Sale Price 20.99
Buy Now
3rd Party 20.99
In Stock.
See what people are saying about this story or others
See Comments in Forum
Previous Next
Pre-Orders
Tomorrow's latest releases