Two societies, one intellectual (the Eternals) and the other physical (the Brutals) live side by side but never meet. Sean Connery is a Brutal out to shake things up. 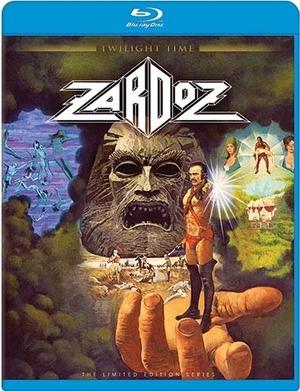 'Zardoz' is a movie that could only have been made quite specifically during the early 1970s. Despite the fact that its story is set in the distant future, the film feels forever trapped in the days of hippie psychedelia, sandwiched between Stanley Kubrick's sci-fi-as-art-film masterpiece '2001: A Space Odyssey' and the rousing rollercoaster excitement of 'Star Wars'. A box office flop in its day and widely regarded as a laughingstock ever since, the picture is a true oddity. On the one hand, it's a serious attempt by talented artists to make an intellectual, thought-provoking science fiction parable about mankind's future destiny. On the other hand, almost every decision those artists made looks wildly misguided and frankly ridiculous. Depending on your perspective, 'Zardoz' is either one of the worst movies ever made or a misunderstood work of genius.

Fresh off the success of 'Deliverance', for which he received an Oscar nomination, director John Boorman had his pick of next project. Rather than repeat himself with something similar, he convinced Twentieth Century Fox to give him a modest $1 million budget to return to his home in Ireland and make a science fiction picture with little supervision. The studio, which had done very well with its 'Planet of the Apes' franchise, saw little risk in allowing a respected, A-List filmmaker free reign to do what he wanted, especially after he recruited cinema icon Sean Connery to be his leading man. How could this combination of talent lose?

For his script, Boorman concocted a hugely ambitious meditation on science, religion, human sexuality, art and mortality, set in a post-apocalyptic future where the world is divided between a barren wasteland populated by brutal savages and a peaceful, scientifically advanced yet agrarian paradise in harmony with nature. At least, that's how he envisioned it in his mind. What audiences saw on screen was a ponytailed Sean Connery running around in a red diaper, hitching a ride on a gigantic flying stone head that spews guns out of its mouth, and landing in a commune of immortal, telepathic hippie weirdos who lose their minds when exposed to his virile masculinity.

The film is one of those utterly inexplicable "What the hell were they thinking?" artifacts of its era. Viewed at face value, everything about it – the costumes, the sets, the special effects and especially the plot – seems absurdly silly. The movie opens with a Shakespearian soliloquy performed very hammily by an actor with a penciled-on mustache and a napkin on his head, includes copious gratuitous nudity, and features a thunder-voiced deity that makes pronouncements such as, "The gun is good; the penis is evil." That's to say nothing of the numerous bizarre, trippy fantasy sequences that I can hardly describe here.

Yet, for all that, Boorman doesn't play this material for laughs or camp value. He takes these ideas very seriously and has constructed an incredibly elaborate mythology to contain them. As nutty as they may be, the various pieces of his world-building are thoroughly thought-out and cohesive. The story makes sense, in its way, and the frequent literary allusions point to the creator's ambition that this would be more than some schlocky B-movie. He wanted to make a new myth for the modern cinemagoer.

Nevertheless, by the time the very hirsute Connery eventually shows up in disguise as a woman wearing a wedding dress, it's hard to fathom for whom this movie was made or how it ever got made at all.

As a viewer, the best way to approach 'Zardoz' is to shut off any sense of detached irony and accept it exactly as presented to you. If you can manage to just go along for the crazy ride, the film actually has some interesting ideas and a lot of very bold and arresting images. If nothing else, it's a fascinatingly unique experiment, whether you consider it a successful one or not.

In licensing this title from 20th Century Fox as a new limited edition release, Twilight Time must believe that 'Zardoz' has enough of a cult following to justify a pressing run of 5,000 copies, rather than the label's standard 3,000. Like most Twilight Time releases, the Blu-ray has a simple static menu and comes packaged with a booklet essay by Julie Kirgo.

Look closely at the back cover and you'll notice an exposed female breast. I guess it's a good thing that Twilight Time doesn't sell its Blu-rays in retail stores.

Quite frankly, I expected the Blu-ray edition of a marginal title like 'Zardoz' to be recycled from some decades-old video master the studio happened to have sitting on a shelf. To my great surprise, Fox has granted the movie a brand new 4k film scan and put some effort into cleaning it up of dirt, speckles and other physical damage. I can say with some confidence that the Blu-ray's 1080p/AVC MPEG-4 transfer is the best that 'Zardoz' has ever looked on home video, and very likely looks better than most if not all of the original theatrical prints.

With that in mind, I fear that viewers watching with modern sensibilities for what constitutes "good" picture quality will think that that the movie, at least most of the first half, looks kind of awful. Very much a product of the early 1970s, much of the film is soft and heavily grainy, hazily photographed (by Geoffrey Unsworth, later of 'Superman: The Movie') with diffusion filters through layers of smoke or mist. The contrast range is flat and colors frequently dull. The supplements on the disc point out that director John Boorman took great pains to create most of the special effects in-camera to avoid optical composites, but the results (especially anything with the flying stone head) hardly look any different than bad opticals a lot of the time.

Things start to improve when Sean Connery gets to the hippie commune, but even then it takes a while. The movie has quite a lot of visually striking imagery in glorious 2.35:1 widescreen, and by the latter half, many scenes are nicely bright, detailed and colorful. Even if still rather soft, the grain at least tames down a bit. So long as you're prepared to accept that the film is a victim of the stylistic fads of its day, the strength of Boorman's vision outweighs the datedness of his technique.

The packaging and disc menus indicate that the movie's soundtrack is provided in DTS-HD Master Audio 2.0 stereo, but the track is technically encoded in 5.1 format. However, only the front three channels get any activity. The surrounds are silent throughout, in keeping with the movie's original stereo sound mix.

Fidelity of the audio is unfortunately rather dated. The mix has very limited dynamic range. Gunshots and explosions sound weak. The track benefits a little from turning up your volume more than you usually might, but the music is flat and sometimes even shrill.

Fortunately, the movie has some very interesting sound design in the use of weird sound effects and ambient noises, especially once the characters enter the mysterious Tabernacle. Those are presented adequately enough.

As a notorious box office bomb, 'Zardoz' has never been treated with much fanfare on home video, with respect to bonus features. What little appeared on DVD has made the transition to Blu-ray.

The following features are new to the Blu-ray:

Many viewers' instinctive reaction to watching 'Zardoz' will be to immediately declare it "cheesy." I suppose that's fair enough. Frankly, it kind of is. At the same time, a movie this bizarre and unique will inspire cult fandom in others. Personally, I became unreasonably excited when I first heard that the film would be released on Blu-ray. I'm very glad to own it.

The Blu-ray from Twilight Time features a freshly remastered video transfer that does the best it can within the limitations of the movie's difficult photographic style. Fans will also find the two audio commentaries worthwhile. Setting aside arguments about Twilight Time's pricing and limited edition business model, this disc is a keeper.