What Black Panther did for superhero movies, Crazy Rich Asians does for romantic comedies. Proving once again that a diverse cast can effortlessly cross social, cultural, and (dare I say it?) prejudicial boundaries to become a runaway box-office blockbuster, director John M. Chu’s breath-of-fresh-air look at the lives, loves, conflicts, and bloated checkbooks of an insanely wealthy Chinese family has helped 2018 become arguably the most progressive year in Hollywood history. This breezy, nuanced, and visually arresting film is a flat-out blast from start to finish and injects newfound energy into what long has been an anemic genre.

When Nick Young (Henry Golding) asks his girlfriend Rachel Chu (Constance Wu), an Asian-American university professor in New York City, to accompany him to his hometown of Singapore to attend the wedding of his best friend and meet his family, Rachel has no idea what’s in store for her. She also has no idea Nick‘s tight-knit clan is one of China's wealthiest...and he’s the heir apparent. Much like the Alice of Lewis Carroll’s famed fable, Rachel finds herself in a strange and fantastic Wonderland where everything isn’t exactly as it seems. She’s welcomed with open arms at first, but soon discovers a fair amount of anti-American prejudice pervades Nick’s social circle and family. His protective and possessive mother, Eleanor (Michelle Yeoh), worries the American Rachel isn’t a suitable match because her values and ideals are more shallow and selfish than theirs. She fears Rachel will alter Nick's perspective, take him away from his family obligations, and make him unable to fulfill his professional destiny.

Rachel is understandably intimidated, and as she struggles to fit in without caving in, she begins to question whether she wants - or can handle - an über-wealthy lifestyle and all the familial stress that goes with it. Meanwhile, Nick tries to become his own man and not bow to his mother’s wish that he give up Rachel and assume his duties as an upstanding Chinese son. Other subplots involving family and friends are woven into the narrative and help paint a textured portrait of a crazy rich - and sometimes just plain crazy - Asian society.

All the tried-and-true elements of romantic comedy are here - dewy young love, sexy actors, sassy sidekicks, exotic locales, a requisite amount of heartache, a fairy tale climax, and a heaping helping of glorious excess. Yet what sets Crazy Rich Asians apart from a plethora of forgettable rom-com cousins are its dimensional characters and a story that wears its substance on its sleeve. While Chu's film is steeped in good old-fashioned fun and zips along at a breakneck clip (there’s nary a dull moment in its two-hour running time), it never shies away from the real-life issues that threaten to sabotage the hero’s relationship with his strait-laced family and his happily-ever-after with his soul mate.

Crazy Rich Asians, first and foremost, is a smart, sophisticated, well-made movie that eclipses others in its class, and that - more than the exposure to and celebration of a foreign culture - is the basis of its appeal. Credit Chu and Peter Chiarelli and Adele Lim’s excellent adaptation of Kevin Kwan’s bestselling novel with striking the right balance between style and substance, escapism, and reality. Of course the film extols Chinese culture (as well it should) and exposes us to its myriad charms (a depiction of a Singapore street feast looked so delectable I almost booked a flight on my iPhone during the film), but it's not afraid to spoof its goofier aspects, acknowledge and lampoon Asian stereotypes, or shine a beacon on the constrictive codes of duty, sacrifice, and honor that often corrode relationships and incite crises of character. It also incisively depicts social and economic prejudice and addresses the demanding nature of many Asian parents. Crazy Rich Asians may not be a complete warts-and-all portrait of the bonds and schisms of Chinese families, but the movie goes farther beneath the skin than 98% of other romcoms.

Though Asian films have always had an enthusiastic fan base that revels in the works of legendary director Akira Kurosawa and martial arts master Bruce Lee, Hollywood has been loath to embrace Asian culture on screen, preferring instead to relegate Asian actors to supporting roles and assimilate them into American plot lines. The breakout success of Crazy Rich Asians has hopefully shattered the last glass ceiling for Asian actors and the narratives that showcase them, as American filmgoers have shown they’re not as close-minded or judgmental as Tinseltown has long feared them to be. It's about time Hollywood honchos realize an intelligent story, dimensional and accessible characters, and technical craftsmanship are all any movie fan craves.

And Crazy Rich Asians checks all those boxes. The literate script produces the requisite amount of laughs, but it’s the humanity that oozes from almost every character - even the caricatures - that draws us in. The plot is also more plausible and relatable than most romantic comedies. Yes, it borrows some elements from other films and has a few holes, but overall, it’s tightly stitched. And boy, does Chu give his movie a slick, gorgeous look. Colors pop, the camera work is fluid and elegant, sets and costumes are out of this world, and an infectious creative energy infuses the entire enterprise. The result is a joyful depiction of an intoxicating culture that has skirted beneath the mainstream radar for far too long.

The cast is impeccable, too. Constance Wu perfectly embodies the wide-eyed Rachel, whose street savviness masks a surprising naïveté she must overcome - without compromising her principles - in order to keep her Prince Charming. And that Prince Charming is a role Henry Golding was born to play. As the dashing Nick, the heir to a mega-empire worth bajillions, Golding projects a disarmingly natural air and genuine sincerity that belie his character’s stature and make him instantly attractive to both women and men. Together, they are a truly golden couple who merit our investment and for whom we avidly and unashamedly root.

The breathtaking Gemma Chan shines as Nick's statuesque cousin Astrid, who seems to be made of ice, but is really as fragile as a porcelain doll, while the always outrageous Awkwafina (as Rachel's former college roommate) steals every scene in which she appears with her raucous brand of uninhibited, improvisational humor. Ken Jeong contributes his share of laughs, but isn’t on screen nearly enough, and Michelle Yeoh, who wowed us 18 years ago in the Oscar-winning Crouching Tiger, Hidden Dragon, makes the strongest impression of all as Henry’s rigid mother who can’t quite release her precious son from the strangulating grasp of Chinese culture, tradition, and social mores. Yeoh douses the film’s bright aura with some necessary darkness, yet she somehow achieves a unique and captivating radiance.

Crazy Rich Asians is a bubbly cocktail with plenty of comic zing and even more heart. It’s also one of the most delightful and exhilarating movies of the year. Rarely do I look forward to sequels, but these characters are so rich (both literally and figuratively), I wouldn’t mind spending another few hours with them. And because America has embraced these awesome Asians with such fantastic fervor, it’s a pretty sure bet I’ll get my wish. 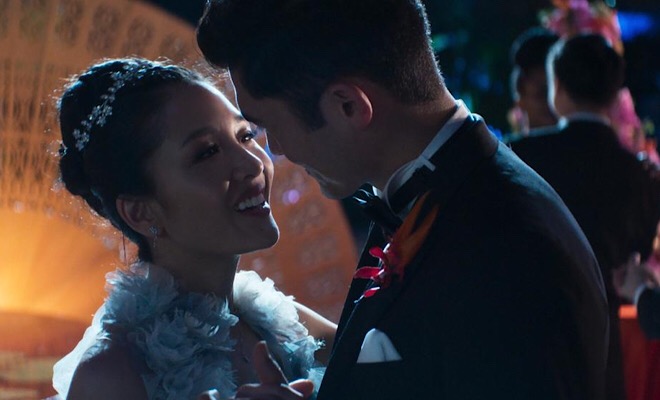 Crazy Rich Asians arrives on Blu-ray packaged in a standard case inside a sleeve. A standard-def DVD and leaflet containing a code to access the Movies Anywhere digital copy of the movie are tucked inside the front cover. Video codec is 1080p/AVC MPEG-4 and default audio is DTS-HD Master Audio 5.1. Once the disc is inserted into the player, previews for A Star Is Born and Ocean’s 8 precede the full-motion menu with music.

Crazy Rich Asians is a bright, colorful, glamorous film, and its superior 1080p/AVC MPEG-4 transfer from Warner beautifully reflects those elements. Excellent clarity and contrast produce a crisp, vibrant image that draws us into the insane affluence that engulfs all the characters. Lush colors leap off the screen, bringing the opulent sets and cosmopolitan locations to brilliant life, while deep black levels provide the picture with welcome weight. Patterns are rock solid, background details are easy to discern, crush is largely absent, flesh tones are accurate and stable, and razor-sharp close-ups highlight fine facial features well. No dirt or noise mar the pristine source material, and the transfer’s silky smoothness makes this eye-candy presentation very yummy indeed.

Romantic comedies don’t usually maximize the capabilities of multi-channel sound, but Crazy Rich Asians is a notable and glorious exception. The DTS-HD Master Audio 5.1 track often fires on all cylinders, providing a much-better-than-average surround experience. Any time there’s an opportunity for the rear speakers to become engaged they rise to the occasion. Most of the effects are subtle, but they’re noticeable nevertheless and produce an enveloping, immersive soundscape. Bass frequencies are also strong, the music selections exude both tonal brightness and depth, and all the dialogue is clear, well prioritized, and - for the most part - easy to comprehend. Distortion is absent and no other imperfections inhibit the power or dull the impact of this top-flight track.

Just a few supplements are included on the disc.

Crazy Rich Asians is a crazy good movie - glitzy, colorful, romantic, funny, and surprisingly believable and substantive. Yes, it breaks ground with its all-Asian cast, but this stylish, seductive comedy tackles the intricacies of culture, family, and love with equal aplomb. Superior video and audio transfers distinguish Warner’s Blu-ray presentation, which also includes a few fluffy supplements. Without question, Crazy Rich Asians isn’t just the best romantic comedy of the year, it’s also the best romantic comedy in recent memory. It’s impossible not to fall in love with it.

Sale Price 7.58
List Price 12.97
Buy Now
3rd Party 2.31
In Stock.
See what people are saying about this story or others
See Comments in Forum
Previous Next
Pre-Orders
Tomorrow's latest releases