Mark L. Lester's Class of 1999, a spiritual successor to his better-known Class of 1984, fancies a future where military-grade android soldiers make better educators to combat the rise of inner-city gang violence. The hilariously silly yet stylishly colorful cult sci-fi flick graduates to Blu-ray with passing grades and a few welcomed extracurricular activities in the supplemental department, making the overall package worth a look for fans of the movie and enthusiasts looking another addition to the cult library.

Cult B-movie director Mark L. Lester (Firestarter, Commando) brought his once-promising 1980s fling with major Hollywood productions to a close with Class of 1999, a spiritual successor of sorts to his more famous and controversial Class of 1984. Only, whereas as the first movie fancied the idea of punk rock hooligans taking over the inner-city schools, this very loose sequel envisions violent street gangs controlling and eventually usurping entire cities, including the school districts. If these were the only two movies Lester ever made, some might come to the conclusion he doesn't much care for teenagers and had little hope for America's future as it inched closer to the new millennium. Granted, at the time of the movie's theatrical release, gang violence was reaching an all-time high, and much of the media was painting a pretty bleak vision of the nation. Lester uses a voiceover narration at the start also pointing this out and then, explains the problem only intensified, forcing the government to take desperate measures to rectify it.

The government's hilarious response is to create the Department of Education Defense, as in placing the military in charge of the education system because, you know, nothing could possibly go wrong with that idea. And the department's initials are a dead giveaway of where this story is so brazenly going to end up. (D.E.D. — read it aloud as one word to understand the irony.) Apparently, part of their job also includes negotiating contracts with weapon manufacturers, which is where the mysterious corporation MegaTech comes in. A cold, steely-eyed Stacy Keach shows up as the head of the company itching to try out his new toys of android educators in the toughest, most violent neighborhoods. With the permission of a newly-hired principal (Malcolm McDowell), the company unleashes chemistry teacher Ms. Connors (Pam Grier), history teacher Mr. Hardin (John P. Ryan) and the P.E. Coach Bryles (Patrick Kilpatrick) unto Kennedy High School, which is heavily secured with metal detectors and guard towers at the entrance. 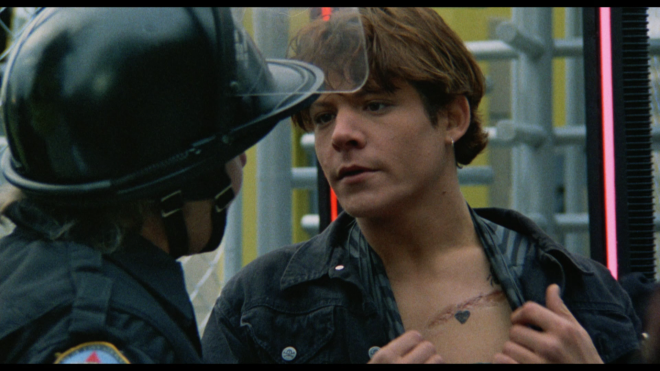 The whole thing smells of the typical inspiring tale of teachers reaching the troubled inner-city youth and showing them the error of their ways. Only this time, science and technology charge into the rescue unbeknownst to the kids attending the reopened school. One such kid is fresh-out-of-prison Cody (Bradley Gregg), the stereotypical juvenile delinquent who no longer wants to be part of the Blackhearts gang, but his little brother Angel (Joshua John Miller) is at the right age to be initiated, forcing Cody to remain as a member. His rival, Hector (James Medina) of the Razorheads, is equally clueless of the school's new education policies, such as teachers being allowed to use violence in making students take their seats while simultaneously stopping the bullies. Pam Grier provides a hysterical demonstration of that particular technique. Meanwhile, Mr. Hardin integrates corporal punishment into his lesson plans — the quickest way of stopping troublemakers — and Coach Bryles has been approved to snap necks for self-defense.

When I originally watched Class of 1999 in theaters with a couple friends, what struck me most was not the idea of teachers incorporating violence but rather, the notion of the plot taking place in Seattle. Today, I wonder if the decision was not only to stand out from the conventional, stereotypical setting of the inner-city but also to suggest gang activity is so bad that it has infected the farthest reaches of suburbia. What still surprises me is the grisly explicit special effects for such a meager production, especially during the final showdown when the android educators begin ripping their flesh to expose serious military weaponry. The only way to combat this sudden left turn into The Terminator territory is for the two rival gangs to set aside their differences and unite as one against the new education system. So, in a weird way, given the movie's conclusion, the story does try to inspire some kind of message. Maybe? And it apparently has something to do with winning the heart of the principal's goody-two-shoes daughter (Traci Lind)?

Lionsgate Home Entertainment brings Class of 1999 to Blu-ray as a Collector's Edition package under the distributor's Vestron Video line. The Region A locked, BD50 disc is housed inside the normal blue case and a cardboard slipcover. At startup, the disc goes to a generic menu selection along the bottom with music playing in the background and a static photo.

Futuristic gangbangers charge into the school of high definition with a rowdy 1080p/AVC MPEG-4 encode, and they barely graduate with a C average. Considering it's low-budget production and history, this is not actually a bad thing. It's still a passing grade for a movie from a bad neighborhood. The HD transfer barges in looking a bit rough and rugged around the edges. Occasional white specks and flecks of dirt lightly sprinkle the picture, and contrast levels fall on the lower end of the grayscale. However, the source has aged well and appears to be in good condition, displaying clean, crisp whites and strong, sharp details throughout. A few softer moments creep up here and there, but for the most part, fine lines and objects are well-defined. Blacks waver between average to accurate with mostly murky shadows, but delineation remains strong. Colors benefit the most from the jump to Blu-ray with primaries looking brighter and more full-bodied, but secondary hues are a tad lacking with flesh tones periodically appearing flushed and sickly. Still, it passes with the minimum requirements.

A wild and boisterous DTS-HD Master Audio 2.0 stereo soundtrack drives up ready to back up the video with similar results but walks away with a slightly better grade. Dialogue is well-prioritized and clean, allowing for every corny and overstated line to be heard above the loudest, most rambunctious moments. And during those action scenes, the mid-range maintains great clarity and differentiation in the peaks, though on the other hand, the design isn't particularly demanding and doesn't push very hard into the higher frequencies. The same goes for the score and song selections, displaying strong fidelity and balance across the three front channels, generating a welcoming and broad soundstage. The lossless mix is nicely layered with a wealth of atmospherics convincingly panning from side to side and expanding the soundfield with reasonable effectiveness. Low bass is interestingly lacking given the type and amount of action, but there is just enough to make it passable.

Audio Commentary: Producer and director Mark L. Lester rides solo for this commentary track where he mostly reminiscences on the production and cast while also touching on the plot, action and special effects.

Cyberteachers From Hell (HD, 20 min): Special effects creators Eric Allard and Rick Stratton are given a few minutes share their thoughts and memories of working on the production.

Future of Discipline (HD, 19 min): Cinematographer Mark Irwin talks some about his involvement, working on other projects, his aspirations for this production and also shares his thoughts on the finished product.

Video Promo (1080i/60, 8 min): Pretty much what the title implies, highlight specific aspects of the plot and production with some BTS footage and interviews.

Trailers (HD, 1080i/60): The original theatrical preview is joined by a pair of TV spots.

Mark L. Lester's Class of 1999 hit theaters at a time when gang violence in America was at its height and of major concern. But rather than aiming for an inspiring tale of teachers reaching the troubled inner-city youth, the filmmakers fancy a future where the military introduces android teachers to take back the cities. Loaded with lots of stereotypical silliness and hilariously convoluted scenarios, the movie remains a surprisingly fun romp with practical special effects that have aged incredibly well. The cult sci-fi flick charges into Blu-ray turf with a rather average high-def video offering some appreciable improvements and an even stronger audio presentation that's more satisfying. With a new collection of supplements to boot, the overall package graduates to the big leagues as a welcomed addition to the cult library.