They're all part of a typical day for the students of Lincoln High. Into this academic abyss arrives Andy Norris (Slaughterhouse Five's Perry King), an idealistic and naive music teacher who has moved into the community with his pregnant wife Diane. Appalled by the crime-infested school, Norris soon crosses sabers with its teenage kingpin, the shrewd and sadistic Peter Stegman (The White Shadow's Timothy Van Patten). With Norris setting his sights on reforming Stegman, and the young miscreant declaring war on his teacher, the duo sets a fateful showdown into motion on the night of an important school orchestra performance.

Directed and co-written by Mark L. Lester (Commando, Firestarter), Class of 1984 is one of the seminal cult movies of the early 1980s. While its vision of a decaying, violence-plagued inner city school seemed over-the-top in 1982, it sadly prophesized the future of American education. Lester's film - which caused a stir at Cannes and reputedly offended one of its own screenwriters - is also notable for its cast, which includes Van Patten, Roddy McDowall and a very young Michael J. Fox. Alice Cooper performs the theme song, "I Am The Future". No longer are the students of Lincoln High the future, for the future as arrived!

Director of better known features 'Armed and Dangerous' with John Candy, 'Commando' with Arnold Schwarzenegger and 'Firestarter' with Drew Barrymore, Mark L. Lester's true claim to fame has to be 'Class of 1984' with Roddy McDowall as the emotionally overwrought biology teacher Terry Corrigan. I concede the notion is pure absurdity in light of the three movies just listed, but in my book, the movie offers more worth remembering as a fun action-thriller romp than a disgraced cop working armored-truck security, a retired Delta Force operative saving his daughter or a cute little girl that can will fire from nothing. And of course, the whole thing is totally up for debate, something I feel forced to add (even though I'm right) to quell the angry calls from Candy and Schwarzenegger fanatics, probably gathering torches and pitchforks ready to demand for my head. In truth, I still like those movies as easy-enough diversions, just not as much of this dystopic vision of the American education system.

That last bit is partly the reason for my enjoyment because what Lester and co-writers Tom Holland (yes, that Tom Holland of later 'Fright Night' and 'Child's Play' fame) and John Saxton ('Ilsa: She Wolf of the SS,' 'Happy Birthday to Me') envisioned is so hilariously off-base and excessive that it has earned a soft spot in my heart. Granted, the schools of the 1980s, especially in the inner cities, were pretty bad and fairly violent, but not to the somewhat cartoonish extent depicted in this 1982 flick. (Eight years later, Lester would follow-up this movie with an even more farcically embellished vision in 'Class of 1999.') As we follow newly-hired and apparently oblivious music teacher Andrew Norris (Perry King) on his first day on the job, we learn students are individually inspected by armed security guards with metal-detectors at the front door, yet the kids succeed at sneaking in switchblades. In a matter of minutes, Mr. Norris's optimism of educating hungry, eager minds begins to fade as McDowall's gun-carrying Mr. Corrigan asks if he knows any fighting moves. 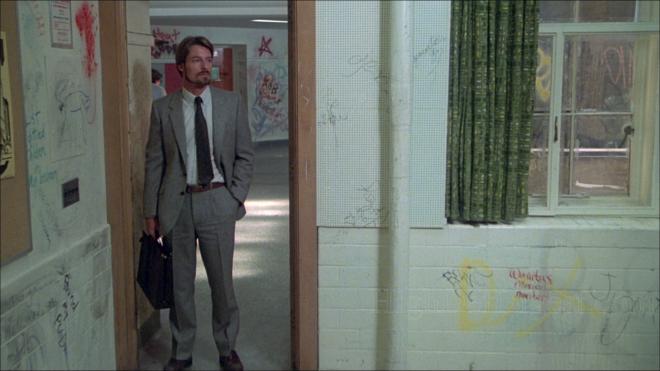 Although predictable, taking the familiar thriller-revenge formula — something along the lines of 'Straw Dogs' — and placing it in a high school setting, it's a great start to a 98-minute film that's surprisingly engaging. A foolishly confident and misguidedly idealistic teacher enters a world completely unfamiliar, disrupting the established social order to the extent that it only brings him harm and forces him to abandon his morals. Soon after ignoring Mr. Corrigan's much too subtle words of caution, our reluctant musically-inclined hero is confronted by his rival, a foul-mouthed, pompous teenager named Peter Stegman (Timothy Van Patten). Partly thanks to Van Patten's excellent performance, the character is a curious and fascinating little punk, who apparently enjoys watching Lester's 'Bobbie Jo and the Outlaw' with Lynda Carter. Ringleader of the school's most violent gang, he's more than what he seems on the surface, a classic case of Narcissistic personality disorder with the talent to flawlessly play piano, leaving both Mr. Norris, classmates and the audience speechless.

That short but incredibly important moment in the film could be argued as the catalyst that has both men butting heads and for everything that is to come. As the story progresses, their conflict escalates and worsens to frustrating degrees, but it keeps us glued to see how it'll all come to an explosive end. Thirty-three years later, it's easy to see Mark Lester imagined 'Class of 1984' as a cautionary tale on the educating system and the growing apathy of the youth, but it's excess and relatively inflated depiction of the punk subculture make it more of a black comedy than social commentary. Still, it's this overblown vision of teenagers which made the film a success and turned it a cult classic. But another reason for remembering it is the unmistakable performance of a very young Michael J. Fox less than a year away from becoming the star of 'Family Ties.' In fact, when I think fondly on 'Class of 1984,' other than hearing Stegman's shocking concerto piece, I think of Fox's distraught teen crying over his best friend's death while under the influence. The future didn't turn out as bleak as Lester imagined, but his film continues to entertain.

Shout! Factory brings Mark L. Lester's 'Class of 1984' to Blu-ray as a Collector's Edition under the distributor's Scream Factory line. The Region A locked, BD50 disc is housed inside a blue, eco-elite case with brand new reversible cover art and cardboard slipcover. At startup, viewers are taken to an animated menu screen with music.

Also, if you buy direct from the Shout! Factory website, fans can get an exclusive, limited edition poster of the newly commissioned artwork with their purchase while supplies last!

Punk rock class is in session with this awesomely terrific 1080p/AVC MPEG-4 encode that surpasses all previous home video editions. To be honest, I never would have imagined the movie to look this amazing. Granted, the presentation still comes with its share of white specks and dirt, but thankfully, it's nothing too distracting or disagreeable. In fact, along with the cigarette burns at around the 58-minute mark and a nice thin layer of grain, the 1.78:1 image exceeds expectations and delivers a pleasing film-like presentation that surely won't disappoint.

Taken from an interpositive, the original elements appear to be in excellent condition, showing sharp details in the clothing and the school's building. While individual hairs are distinct and the smallest grime and smudge of dirt on the costumes is plainly visible, graffiti along the walls and the tiniest imperfection is legible, and in spite of the deliberately mild soft-focus photography, facial complexions are quite revealing. Colors are boldly saturated with rich, energetic primaries and warm, vibrant pastel hues. Contrast is very well-balanced with crisp, clean whites, allowing background information to be as discrete as the foreground. Black levels are true and accurate with deep, penetrating shadows that thankfully never ruin delineation in the darkest portions of the screen.

Per usual, Shout! Factory releases another cult favorite with two listening options, both in DTS-HD MA, and as is often the case, one is favored over the other mostly because it is closer to the original soundtrack.

Considering the movie was made in 1982, it's no surprise the lossless stereo mix wins my vote over the 5.1 upmix. As a matter of fact, the difference between the two is evident almost from the start. The latter track is a quick and dirty version of the former, meaning producers simply turned up the volume and forced specific details of the original recording into the other speakers. Basically, the whole thing sounds fake and loud with discrete effects being more of a distraction while at the same time, hissing and air is so apparent, it comes off as aggravating noise.

In the original stereo, the presentation is far more pleasing and natural with imaging that's broad and welcoming. Music fills the front soundstage with clean, distinct clarity while background activity and atmospherics keep things lively with the bustle and action of the school. Dynamic range is sharper and cleaner with adequate bass that provides weight and depth to the music and the couple explosions. Vocals are very well-prioritized and intelligible throughout, making this high-rez track the way to go.

Thirty-three years later, it's easy to see Mark L. Lester imagined 'Class of 1984' as a cautionary tale on the education system and the growing apathy of the youth, but it's excess and relatively inflated depiction of the punk subculture make it more of a black comedy than social commentary. Still, it's this overblown vision of teenagers along with the excellent performances which have made the film a success and turned it a cult classic. The Blu-ray arrives with a great audio and video presentation that's sure to please. With a healthy assortment of supplements, the overall package make a fine addition to the cult collection. Recommended.

Sale Price 15.49
List Price 16.79
Buy Now
3rd Party 15.49
In Stock.
See what people are saying about this story or others
See Comments in Forum
Previous Next
Pre-Orders
Tomorrow's latest releases