Doubling the size of its ensemble cast with a trio of even worse bad moms, A Bad Moms Christmas crashes the holiday festivities with a series of blandly offensive jokes and "Bah, humbug!" raunchiness. The moms visit Blu-ray with a surprisingly excellent audio and video presentation, but with a puny selection of supplements to make the visit more tolerable, the overall package is a rental at best.

After the unexpected box-office success of Bad Moms in 2016, the same production team immediately rushed into making a sequel. And it most definitely feels rushed. A Bad Moms Christmas, which was shockingly completed and in theaters within sixteen months, lewdly screams of cash-grab desperation, repeating the same story beat by beat with only a few minor tweaks here and there. Most notably, this absurdly stupid attempt to be a commentary on modern motherhood is now set during the often-stressful holiday season. Directing-writing duo Jon Lucas and Scott Moore (The Hangover, 21 & Over) return to pen a plot set only a few months after the previous events and make every effort to outdo the raunchiness of its predecessor, including some out-of-the-blue and nowhere-remotely-funny racist jokes at the expense of Jay Hernandez that go completely ignored and never addressed. This is only one of several plot holes that, like the first movie, goes unresolved in favor of an underwhelmingly predictable and unsatisfying climax.

Other than being a copy of itself, the filmmakers borrow heavily from practically every Christmas-themed movie ever made, and they follow the template like a roadmap — or maybe, they used Google Maps — for arriving at the exact same spot moviegoers have visited hundreds of times before, refusing to stop at any new sightseeing destinations along the way. They're like those parents who deny their kids playing games or watching movies on handheld devices, ordering us to look out the window and enjoy the sights even though we've seen it all before and absolutely nothing has changed. Mila Kunis's Amy rants about her role as a mom that wants to provide the best Christmas for her two kids with Kristen Bell's anxious-ridden Kiki and Kathryn Hahn's lovelorn Carla. Thus, the trio decides to be "bad" — emphasis on the quotation marks as air quotes — by . . . having a chill, laidback Christmas? That's literally the movie's definition of being bad this go around with the worst thing being committed is the ladies shoplifting a decoration tree from the mall. 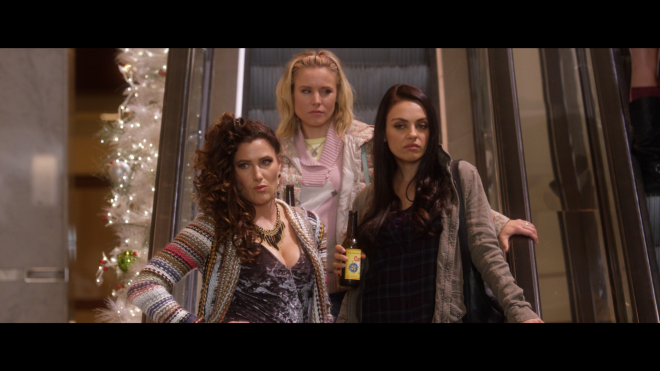 Instead, the apparent bad in the film's title comes from a slightly more complicated, if also a bit disconcerting place. Each of the ladies is visited by mothers who are literally bad at being moms, almost as though deliberately being three heavily-handed prime examples of bad parenting, yet in this fantasy universe, our protagonists grew into decently healthy adults. Well, except for maybe Hahn's Carla. She's a special case in need of intensive psychological help, of which she's denied in this movie. Carla's mom (Susan Sarandon chewing the scenery like a pro) is the neglectful parent, the type who allows their kid too much freedom and even worse, only visits when she wants something, like a loan for a fabricated investment opportunity. Kiki's mom (Cheryl Hines) smothers her child, doesn't possess boundaries and prefers to be their child's best friend. Then, the filmmakers seem to imply Amy's mom (Christine Baranski) is comparatively the worst because she's highly critical, overbearing and undermines every aspect of her daughter's life.

Oddly, in spite of this potential for conflict and an ensemble of talentedly funny women at the center, A Bad Moms Christmas fails to muster a single giggle or even the slightest smile. The closest we come to a possible laugh is the adorable Ariana Greenblatt dropping F-bombs, but even then, it ultimately comes off as a desperate cheap-shot on the part of the filmmakers. Greenblatt plays Jesse's daughter Lori, and she's the only innocent, good-natured child in the entire movie. On the other hand, Amy's kids, Jane and Dylan, are shown to be terrible, ungrateful brats when they suddenly turn on their mother because being showered with expensive gifts from grandma comes to an abrupt but absolutely reasonable end. Not to worry, though, because Christmas is saved at the last minute in the form of a dues ex machina miracle while the other two grandmas realize their failures without some form of justified self-revelation. The humorless comedy simply comes to a contrived happy ending, making us feel dirtier than when we walked into this family mess.

Universal Studios Home Entertainment brings A Bad Moms Christmas to Blu-ray as a two-disc combo pack with a code for an UltraViolet Digital Copy. A Region Free, BD50 disc sits comfortably opposite a DVD-9 inside a blue, eco-elite case with a glossy, lightly-embossed slipcover. At startup, viewers can enjoy several internet-based trailers, which can be skipped, before switching to a menu screen with the standard options on the left, a static picture of the three main characters and music playing in the background.

Moms return to their misbehaving ways on Blu-ray with another stunning AVC MPEG-4 encode, continuously dazzling the screen with pitch-perfect, comfortably-bright contrast. The freshly-minted digital transfer, taken from a Red Epic Dragon source, displays intensely brilliant and radiant whites while deep, inky-rich blacks provide the 2.40:1 image with a three-dimensional depth and excellent shadow detailing. Every scene features razor-sharp details, from the individual tiles of the mall's floor to all the holiday trimmings decorating the interior of Amy's house. Viewers can even out the tiniest imperfection of the house before grandma pushes her particular brand of festive cheer, or they can plainly see the puny fuzz balls of sweaters, the threading of jeans and the separate sparkling rhinestones and beads of Isis's tacky outfits. The HD presentation also radiates with a lavish parade of jubilant colors. The screen is drenched in cheery crimson reds and spirited, electrifying blues with several splaterings of lively greens while secondary hues are accurately rendered and full of warmth, and facial complexions appear natural and highly revealing.

For a bunch of rowdy, bad-mouthed moms, they don't cause much of a ruckus in this DTS-HD Master Audio 5.1 soundtrack. In fact, it's a surprisingly conservative design with much of the focus and attention spread across the fronts where background activity moves across the three channels fluidly and effortlessly. Displaying excellent channel balance and fidelity, the soundstage is pleasantly wide and broad with appreciable clarity and clean distinction between the loudest and softest moments. This is best appreciated during the many song selections, though the low-end is not quite as punchy and robust as I would have liked but it's adequate for providing the track with a strong presence and depth. And in between each song, vocals are precise and well-prioritized. The only letdown is the lack of activity in the surrounds. Of course, there is the occasional sound effect filling much of the silence and creating a bit of ambiance, but the music does more of the real legwork at establishing a wider soundfield. All in all, it's not a bad lossless mix and it gets the job done, but it's also not memorable or particularly noteworthy.

Crew Music Video (HD, 2 min): Crew members do their own version to the movie's montage sequence.

After the surprise success of the first film, the creators immediately rush A Bad Moms Christmas into production, and the result is a messy repetition of its predecessor that works desperately to be cruder, raunchier and more offensive. Doubling the ensemble cast with a trio of usually funny ladies, the sequel is a humorless holiday-themed comedy littered with contrived conflicts that are easily resolved for an eye-rolling happy conclusion. The Blu-ray crashes the Christmas party with superb video quality and an excellent audio presentation, but a disappointingly puny selection of supplements will have fans wondering if it's worth spending the holidays with this utterly dull dysfunctional family.