In this outrageous comedy from the writers of The Hangover, Amy (Mila Kunis) has a seemingly perfect life - a great marriage, over-achieving kids, beautiful home and a career. However she's over-worked, over-committed and exhausted to the point that she's about to snap. Fed up, she joins forces with two other over-stressed moms (Kristen Bell and Kathryn Hahn) on a quest to liberate themselves from conventional responsibilities – going on a wild, un-mom-like binge of long overdue freedom, fun and self-indulgence – putting them on a collision course with PTA Queen Bee Gwendolyn (Christina Applegate) and her clique of devoted perfect moms (Jada Pinkett Smith and Annie Mumolo).

The brains behind 'The Hangover' franchise, Jon Lucas and Scott Moore, bring their particular brand of raunchy party humor to soccer moms in 'Bad Moms.' For the most part, their take on the disillusionment of suburbia crashes the neighborhood with various rib-tickling hysterics of the low camp variety, something in the vein of Paul Feig's 'Bridesmaids.' But it also tends to pull in the reigns in several spots while jumping over several unresolved plot holes for accomplishing its underwhelmingly predictable climax, preferring to play it safe than risk offending anyone.

This very attitude can be seen in Mila Kunis's Amy Mitchell, a mother of two figuratively pulling out her hair every few minutes to appear like the world's greatest mom. She runs all over town dropping off the kids at their extracurricular activities and spends her free time participating in every PTA event. We meet our overworked hero discovering her husband (David Walton) "not cheating" on the internet with a dairy farmer and feeling unappreciated at a coffee company run by a much-too mellow and aloof Clark Duke, who brings his usual hip and cool style of comedy.

When she finally snaps, learns to say "NO," and starts living for herself a little more, her careless indifference opens doors for the lewd humor, from the lighthearted and harmless, such as telling the kids to cook for themselves and driving the ex's classic car for the day, to the vulgar and smutty. However, what the filmmakers deem in bad taste for today's hardworking moms remains prudent and tame by contemporary standards. In rather PG-13 fashion, Kunis' embarrassing attempts to get her groove back is at the only bar on Earth serving single men apparently not interested in attractive women looking for a one-night stand. 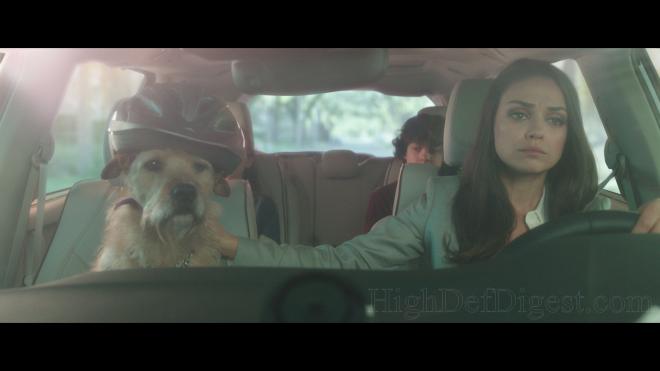 Nevertheless, it provides one of the movie's funnier moments, though that's also largely due to Kathryn Hahn and Kristen Bell joining in the escapade. Hahn's Carla is the brazen, wanton divorcee teaching her new friends to break loose of their cultural chains and her crudeness is mostly responsible for saving the movie. Bell's Kiki is the complete opposite, faint-hearted mom of four in a thankless marriage to an overbearing husband, and she is most in danger and need of rescuing from herself.

And it’s a good thing Amy has her band of armed compatriots at her side because she's up against a world of men who are keeping her down and taking her for granted. Well, the men in the movie aren't all that bad. They're just being jerks in their own way, except for when Carla is trying to sleep with anything than walks on two legs. Besides, there's at least one nice guy that more than makes up for the bad hombres in the story. Granted, he's a two-dimensional boy toy who so happens to also be the world's greatest dad (Jay Hernandez) and used mostly as an object of lustful desire by all the women, including Amy. But still, it balances things out, right?

Moreover, the real "frenemy" is Christina Applegate as the snooty Gwendolyn James — even her name sounds as though being condescending to others is simply part of her nature and DNA. Although Applegate is convincing in the role — talking, walking, breathing, standing with a pretentious, patronizing air about her — she's never funny, cracks a single joke and is ultimately unforgettable. At her side is Jada Pinkett Smith mirroring Applegate in almost every way, except with mean, glaring eyes that practically reveal switchblades gleaming in the sunlight and as though she's sharpening her nails for a war that disappointingly never comes. Picking up the slack so that viewers can see the humor in this grown-up version of 'Mean Girls' is Annie Mumolo playing the group's third wheel, who's as quick as a tortoise on Prozac but brings some of the picture's biggest laughs.

There is a great deal of potential in 'Bad Moms' for something cruder and raunchier, especially when considering directors Lucas and Moore's last comedy, '21 & Over,' was a complete garbage bin of pure male debauchery. With women leading the charge into lewd carnal depravity, the filmmakers demonstrate they know how to balance the laughs with the smut, yet they don't allow these ladies the full privilege of letting loose and play as the boys do. Even Carla, as the wildest of the bunch, is eventually reigned in as part of the film's overarching theme about modern motherhood. And the women drop F-bombs with such emphasis that it made me wonder if they've ever used or heard the word until now. It's not all bad, however, and the summer comedy is pleasantly entertaining despite also being predictable. But since we're grading on a scale of raunchiness, these bad moms have earned a passing grade of C.

Universal Studios Home Entertainment brings 'Bad Moms' to Blu-ray as a two-disc combo pack with a code for an UltraViolet Digital Copy. A Region Free, BD50 disc sits comfortably opposite a DVD-9 inside a blue, eco-elite case with a glossy, lightly-embossed slipcover. At startup, viewers can enjoy several internet-based trailers, which can be skipped, before switching to a menu screen with the standard options on the left, a static picture of the three main characters and music playing in the background.

The moms stage a revolt on Blu-ray with a beautiful, reference-quality 1080p/AVC MPEG-4 encode that will surely win them respect, even amongst the most vehement haters.

One area worth noting and taking into consideration, however, is that the directors and cinematographer Jim Denault have taken an interesting approach by shooting the entire movie with a soft-focus look, thanks to diffuser filters. This give the story a hazy, dreamlike appearance that oddly recalls classic Hollywood romances, though I'm not sure that was the filmmakers' intentions. But in either case, the deliberate photography doesn't take away from the sharp definition and clean, resolute lines in the pristine houses and neighborhoods. Beneath all the diffused light, viewers can still make out the stitching in the women's clothing and the tiniest blemish and pore in the lifelike facial complexions. Individual hairs are razor sharp, and background information remains plainly visible, even in the darkest shadows.

Presented in a 2.40:1 aspect ratio, the high-def transfer also arrives with brilliant, comfortably bright contrast that allows for excellent visibility into the far distance in every scene, and crisp, blazing whites throughout keep everything lively and glowing. Blacks are rich and opulent, from certain articles of clothing to the several nighttime sequences, providing the image with a welcomed cinematic quality. Beneath the heavily stylized photography, primaries remain sumptuous and dazzling even during the most heartfelt moments so that the story remains consistently animated and high-spirited. The overall palette, however, places more emphasis on the secondary hues, which remain just as energetic and intensely glowing, recalling again that classic feel that amazingly suits the film well and gives us a demo-worthy presentation.

Rebellious moms also make a scene with an excellent DTS-HD Master Audio soundtrack that's quite satisfying for a raunchy comedy such as this. We're not talking littered with various ambient effects to immerse the listener, but on several occasions, random sounds and noises use the surrounds with amusing discreteness and great directionality. The hustle and bustle of employees actually doing nothing at Amy's office fill the room, the rustling of leaves when the ladies chat outside the school are subtle in the background, and the women at Amy's PTA house party are heard celebrating all around. This is not always consistent, yet it's enough to add some layers to a character-driven comedy.

But ultimately, it's the song selections which impress most by not only lightly bleeding into the sides but by also sprawling across the entire soundstage with a passionate energy. Even during quieter moments, imaging remains broad and expansive with a mid-range that's dynamic and very well-defined. A punchy, sometimes authoritative low-end delivers depth and weight to the music while vocals are crystal-clear and precise in the center, making this lossless mix a fun listen.

The brains behind 'The Hangover' franchise, Jon Lucas and Scott Moore, bring their particular brand of raunchy party humor to soccer moms in 'Bad Moms.' Overall, Mila Kunis, Kristen Bell, Kathryn Hahn, Christina Applegate and Jada Pinkett Smith deliver excellent performances, but they don't quite bring the barrel of laughs promised by the plot. Nevertheless, it makes for a fun popcorn flick that still manages to entertain despite its predictable plot. The Blu-ray arrives with beautiful, reference-quality video and an excellent audio presentation ready to bring the house down. With a disappointingly small and average set of supplements, the package is nonetheless recommended for fans and those looking for a raunchy-lite comedy.

Sale Price 7.5
List Price 14.98
Buy Now
3rd Party 14.99
In Stock.
See what people are saying about this story or others
See Comments in Forum
Previous Next
Pre-Orders
Tomorrow's latest releases