Screen legends Cary Grant (Father Goose) and Tony Curtis (Some Like It Hot) ship out for laughs and adventure in one of the most hilarious comedies to ever hit the high seas. The U.S.S. Sea Tiger is on its last legs until the handsome skipper (Grant) and his ingenious, if slightly unethical, junior officer (Curtis) scavenge the parts and supplies needed to put the sub back into action. Forced out to sea prematurely by an enemy air attack, the sub leaks and limps along until five stranded Army nurses come aboard and initiate their own renovations. From one mishap to another, the sub ends up a blushing pink, making it a target for both Japanese and American forces. The two dashing stars lead an all-star supporting cast that includes Joan O’Brien, Dina Merrill, Gene Evans, Dick Sargent, Arthur O’Connell, Gavin MacLeod, Madlyn Rhue and Marion Ross. Wonderfully directed by the legendary Blake Edwards (The Pink Panther) and beautifully shot in color by the great Russell Harlan (Rio Bravo, Red River). The classic comedy received a 1959 Academy Award® nomination for Best Writing (Story and Screenplay written directly for the screen).

A few years before launching the hugely successful 'Pink Panther' franchise, Blake Edwards made his first breakthrough mark as a feature filmmaker with 'Operation Petticoat', a naval comedy that put Cary Grant in charge of a pink submarine. Was this a coincidence, director typecasting, or did Edwards simply have a thing for the color pink?

After opening with a framing device set in the then-present day of 1959, the film flashes back to World War II, where Grant plays Commander Matt Sherman of the U.S.S. Sea Tiger stationed in the Pacific. Right off the bat, the boat is damaged in a sneak attack by Japanese fighter planes. The Navy wants to scuttle the sub, but Sherman is convinced that he can get it back in fighting shape. The Sea Tiger is barely a year old and has never seen proper action, which strikes him as being a damn shame.

Sherman is granted two weeks to make whatever repairs he can, but the sub is reduced to only a skeleton crew while most of his men are shipped elsewhere. As a concession of sorts, Sherman is assigned one Lt. Nick Holden (Tony Curtis), an admiral's aide who'd been stranded on base without his admiral. At first meeting, Holden appears to be completely useless. He shows up for duty in a dress white uniform, much to the amusement of the blue collar crew. He has no combat or even seafaring experience. His primary duty had been as an Entertainment Officer, and what the heck good is that on a submarine?

For all his inadequacies as a seaman, Holden is also a slick operator. He's incredibly resourceful and knows how to talk his way into or out of any situation. He names himself the ship's Supply Officer and, through a combination of scavenging, swindling and outright thieving, is able to get the crew just about anything they need to put the Sea Tiger back out to sea, hobbled though it may be.

Much of the comedy in the movie stems from the clash of these two personalities, the dedicated Naval officer Sherman and the flippant playboy Holden. To stir the pot a little, Holden also brings aboard five comely nursing officers who need transport to another island. Yes, women! On a submarine! Sherman is left flustered. "A submarine's not designed to be coeducational," he stammers. The superstitious among the crew also believe that women have no place on a boat.

The movie was made in 1959, and many of its attitudes toward gender may be seen as sexist by a modern audience. That's not entirely unfair. The ditzy women get in the way a lot, and are viewed as a disruption and a nuisance by most of the characters. Holden's aggressive womanizing would be termed sexual harassment today, but is depicted as charming and endearing here. However, to its credit, the film was actually fairly progressive for its day, in that the women ultimately prove themselves valuable additions to the crew and even teach the men a thing or two about running a ship. Also, the plot contrivance that causes the submarine to get painted pink (which puts it in danger of misidentification by the American fleet) has absolutely nothing to do with the female characters.

Coming from the director of the later 'Pink Panther' movies, 'Operation Petticoat' surprisingly has almost no slapstick at all. It's a very funny movie without being overtly jokey. The humor is all based on witty dialogue, clever situations and terrific cast chemistry, mixed in with some fun adventure elements. The film is far more sophisticated and entertaining than I expected from the premise. In fact, it was even nominated for a Best Original Screenplay Oscar. Not that I put much stock in movie awards, but this one deserved the recognition.

'Operation Petticoat' has changed hands among a host of different distributors over the years. During its 1959 theatrical release, the film was a Universal International production. On home video, it moved to Republic Pictures (VHS) and Artisan Entertainment (DVD) and is now with Paramount. Because Paramount has little to no interest in releasing catalog titles on Blu-ray anymore, the studio has licensed it out to Olive Films.

Like most of Olive's Blu-ray releases, the 'Operation Petticoat' disc is a zero-frills affair with only a simplistic menu and no bonus features. It doesn't even have any subtitles or alternate language dub options. You get the movie slapped onto a single-layer disc and that's it. 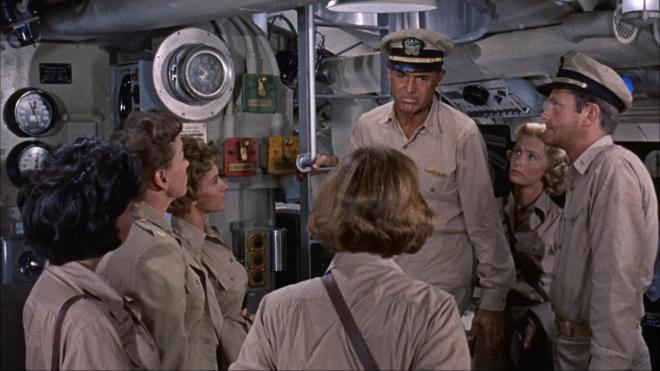 Because Olive Films is a second tier distributor, its Blu-ray releases are at the mercy of the source materials that the content owner provides. Unfortunately, Olive is often a receptacle for movies currently lingering in poor condition, for which the original studio does not want to spend any money to properly restore. That's the sad case for 'Operation Petticoat'. The Blu-ray's 1080p/AVC MPEG-4 transfer looks like it's been derived from a ratty old theatrical print positively coated in distracting dirt and scratches from start to finish. Its grain is heavy and the colors are faded.

A certain subset of viewers may embrace this as looking "film-like," because it brings up nostalgic memories of watching old movies in repertory theaters running decades-old film prints that had been through the projector several hundred times too many. If someone is able to derive enjoyment from this disc on that level, I wish them many happy viewings. I tried to shift into that mindset, and was able to find the disc at least watchable. However, if you (not at all unreasonably) expect a Blu-ray to look like a proper screening of a quality print in a first-run theater (if not even better than that, which many Blu-rays are able to provide), well… this ain't that. 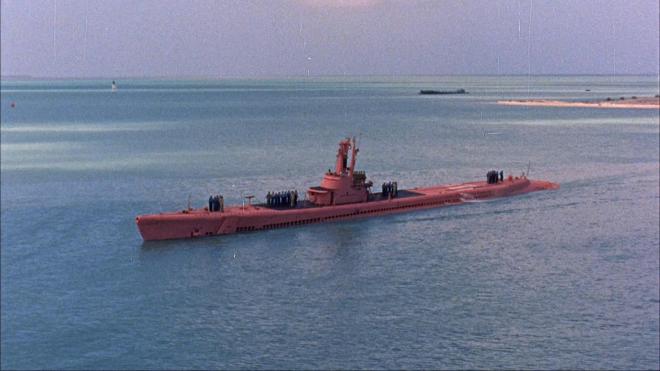 To give it some credit, the high-def transfer is reasonably detailed, if generally soft, and doesn't appear to have much untoward digital processing. Scenes with optical effects like dissolves (of which the movie has quite a few) may turn dupey, and the occasional insertion of stock footage may stand out as especially crappy-looking, but those at least are flaws of the production, not the Blu-ray.

The specs printed on the disc case describe the aspect ratio as "1.78:1 Anamorphic Widescreen," which has obviously been copied directly from the previous DVD release, given that anamorphic enhancement is not a term that applies to Blu-ray. The video indeed measures a screen-filling 16:9. The movie would have been composed for 1.85:1, but this is close enough that the difference isn't worth quibbling over, except by hard-line aspect ratio purists.

The sound quality of the disc is likewise… I suppose "undistinguished" would be a polite description. The DTS-HD Master Audio mono track is set for a loud default volume, which is jarring considering that it sounds shrill on the high end and muddy everywhere else. Sound effects like machine guns and explosions are extremely dull. A movie like this is mostly a lot of talking. While dialogue is clear enough, most of the ADR work stands out with poor sync.

Again, the disc is watchable despite these flaws, but I have no doubt that it could sound better with more care and effort. 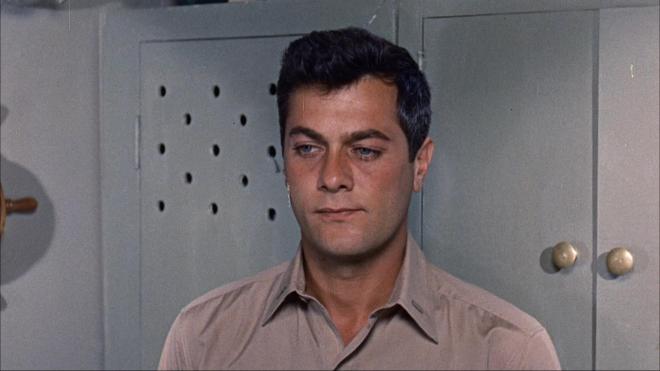 The Blu-ray has nothing at all in the way of bonus features. For what it's worth, neither did the old DVD edition.

I'm well aware that catalog titles don't sell well on Blu-ray, especially not movies from the prehistoric era before 1980 that seems to be a hard cut-off that today's viewers refuse to cross. Nevertheless, a popular Oscar-nominated comedy starring two cinema icons deserves better treatment than this, for historical purposes if nothing else. The film has been given no care or attention at all from the studio that owns it, and was merely shuffled off to a third-party distributor in very sad condition.

The Blu-ray just barely falls on the positive side of watchability. Had this wound up in the hands of a label like Mill Creek and sold for $5, I might cut it a little more slack. However, Olive Films' asking price seems absurd to me given the quality of the product. Even though I enjoyed the movie a lot, I have a very hard time recommending the Blu-ray for purchase.

Sale Price 21.87
List Price 29.95
Buy Now
3rd Party 19.12
In Stock.
See what people are saying about this story or others
See Comments in Forum
Previous Next
Pre-Orders
Tomorrow's latest releases