Though Casanova Brown may not rank among Gary Cooper’s best-known films, this delightful romantic comedy from the mid-1940s offers the usually stoic actor a welcome chance to kick up his heels. A beautiful ClassicFlix video transfer and solid audio revitalize this minor yet very enjoyable film, which is certainly worth a look for both Cooper and Golden Age Hollywood fans.

Back in 1985, critics and public alike lauded the freshness of the French comedy Three Men and a Cradle, but the tale of a trio of clumsy and inept young men who must care for a newborn baby left on their doorstep owes a sizable debt to a humble American movie made 40 years earlier. Casanova Brown proffers a much different plot, but a good portion of this lightweight confection focuses on the earnest attempts of a mild-mannered, small-town fellow to cater to the needs of his newborn daughter, whom he impulsively spirits away from the hospital after learning her mother may put her up for adoption. Director Sam Wood’s adaptation of a little-known play co-written by actor Thomas Mitchell (of Stagecoach and Gone With the Wind fame) may not be as rollicking or romantic as fans might like, but it provides a solid showcase for star Gary Cooper, whose patented low-key approach suits the material well.

Cas Brown (Cooper) is a distant ancestor of the legendary - and quite prolific - lover Casanova, but you’d never know it by looking at the upstanding, strait-laced guy returning to the arms of his hometown honey, Madge Ferris (Anita Louise), after what seems to have been a traumatic tenure in New York City. Cas won’t talk about what transpired in the big, bad metropolis, but he’s certainly happy to be back in the sleepy, secure confines of rural Rossmore, Illinois, and before long he and Madge become engaged. That doesn’t please Madge’s cynical, money-grubbing father, Mr. Ferris (Frank Morgan), who refers to himself as a “shameless, unmitigated scoundrel” and resents his own family so intensely, he tries to dissuade Cas from joining it.

Cas, however, won’t heed the warning and forges ahead with plans for the nuptials. Yet on the eve of the ceremony, he receives a cryptic letter from a Chicago maternity ward that makes him recall his Big Apple fling with Isabel Drury (Teresa Wright), a lovely young woman whom he marries on a whim after a whirlwind courtship. Isabel adores Cas, but when he meets her eccentric parents at their Long Island estate, his hapless attempt to conceal a lit cigarette results in a massive fire that destroys both the Drury mansion and his relationship with Isabel. They annul the marriage, but their brief union just might have spawned an unwanted offspring. Cas departs for Chicago to investigate, and becomes embroiled in complications galore, culminating in a reunion with Isabel and his brazen abduction of Baby Brown.

Casanova Brown is a minor blip on Cooper’s career radar, but it’s an enjoyable trifle that allows the actor the chance to explore his sensitive side. Though the love story plays second fiddle to medical mishaps and Cas’s bumbling interactions with his newborn child, the script by Nunnally Johnson (who also adapted the other recent Gary Cooper Blu-ray release from ClassicFlix, Along Came Jones) contains enough verbal zingers and madcap situations to maintain the story’s momentum. The colorful characters, including Isabel’s astrology-obsessed mother (Patricia Collinge) and the plain-Jane nurse (Mary Treen) Cas enlists to help him with the baby, supply additional flair that helps salvage weak narrative patches.

There’s a reason Cooper remained a top box office star for 30 years. His sturdy presence, rugged good looks, and winning personality made him a natural in almost any film genre, enabling him to bounce from romantic dramas to westerns, comedies, war films, and biopics with ease. He also underplays well and possesses fine comic timing, qualities that serve him especially well here. While he and Wright make an attractive pair (just as they did in The Pride of the Yankees two years earlier), the story keeps them apart most of the time, and as a result, romantic fireworks come at a premium...a bit strange for a movie with “Casanova” in its title.

Wright’s sincerity consistently shines through, while Anita Louise makes the most of her role as Cas’s wronged fiancée. Jill Esmond, perhaps best known as the first wife of Laurence Olivier (who dumped her for Vivien Leigh), provides a sobering presence as a concerned pediatrician, but it’s Frank Morgan as the irascible Mr. Ferris who steals every scene in which he appears. Though he specialized in portraying befuddled characters like Professor Marvel in The Wizard of Oz, Morgan was an extremely versatile actor, and his work in this modest film ranks among his best.

Classics fans will surely get a kick out of Casanova Brown. It’s nothing special, but it’s light, airy fun distinguished by stellar performances, a snappy screenplay, and breezy direction. If you like the stars, you’ll enjoy this free-wheeling bit of romantic fluff. 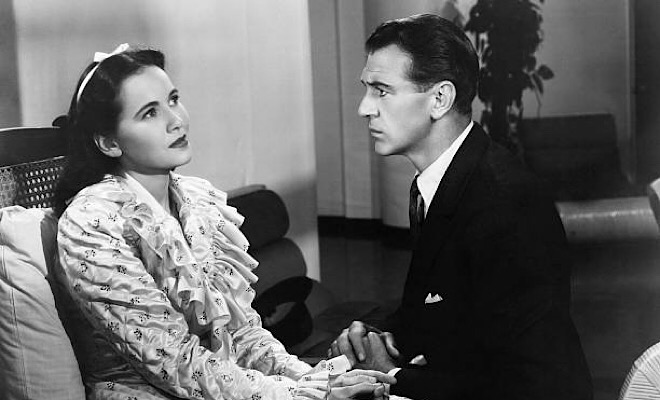 Casanova Brown arrives on Blu-ray packaged in a standard case. Video codec is 1080p/AVC MPEG-4 and audio is DTS-HD Master Audio 2.0 mono. Once the disc is inserted into the player, the static menu without music immediately pops up; no previews or promos precede it.

Not much hoopla surrounded the Blu-ray debut of Casanova Brown - at least when compared to its sister Gary Cooper release, Along Came Jones - but this luscious-looking 1080p/AVC MPEG-4 transfer deserves to be lauded. Blessed with a superior source that sports only a couple of errant specks here and there, Casanova Brown instantly commands attention, as terrific clarity and contrast produce a vibrant, balanced picture that heightens the story’s intimacy. Lush, inky blacks, bright whites that never bloom, solid patterns that resist shimmering, and a wonderfully varied grayscale enhance depth and detail, while just the right amount of grain supplies texture and preserves the image‘s film-like feel. Shadow delineation is quite good, crush is never an issue, and sharp close-ups render fine facial features well. Though the transfer isn’t always consistent - some scenes exhibit a softer look than others - it beautifully honors this little-known romantic comedy. Once again, ClassicFlix exceeds expectations, as it rescues an independent film from oblivion, supplies some much-needed TLC, and presents it in the best possible light so it can be enjoyed by present and future generations.

The DTS-HD Master Audio 2.0 mono track supplies clear and well-modulated sound. Casanova Brown is a relatively quiet film, but the many moments of calm are not disrupted by any age-related imperfections like hiss, pops, and crackles. Arthur Lange’s Oscar-nominated music score sounds rich and robust, and all the dialogue, even when whispered, is easy to comprehend. While this track won’t provoke anyone to prick up their ears, its clean, seamless presentation is quite pleasing, especially considering its antiquated nature.

Sadly, there are no supplements, not even a trailer, on this disc. Cooper did reprise his role on a radio adaptation of Casanova Brown, but it’s unknown whether that broadcast still exists.

Though Casanova Brown may not rank among Gary Cooper’s best-known films, this delightful romantic comedy from the mid-1940s offers the usually stoic actor a welcome chance to kick up his heels. As an about-to-be-wed professor who discovers on the eve of his nuptials that he may have fathered a child with another woman, Cooper exudes warmth, charm, and just enough wild-eyed confusion to keep the film breezing along. The lovely Teresa Wright and always energetic Frank Morgan supply able support, while a beautiful ClassicFlix video transfer and solid audio revitalize this minor yet very enjoyable film, which is certainly worth a look for both Cooper and Golden Age Hollywood fans.

Sale Price 26.64
List Price 29.99
Buy Now
3rd Party 19.71
In Stock.
See what people are saying about this story or others
See Comments in Forum
Previous Next
Pre-Orders
Tomorrow's latest releases