Along Came Jones is one of Gary Cooper's lesser known features, but this breezy mix of comedy, romance, and action becomes a surprisingly entertaining western. It may be dated and a little corny, but it holds up well, and the winning performances coupled with a good-looking 4K restoration from ClassicFlix make this forgotten curio worth a look for fans of the actor and genre.

Mistaken identity has been a popular plot device for screwball and romantic comedies throughout Hollywood history, but the clichéd formula feels almost fresh when transferred to the Wild West. Along Came Jones, a minor, nearly forgotten Gary Cooper vehicle from 1945, cleverly uses the template as a springboard for a rollicking mixture of humor, romance, gunfights, and showdowns that remains disarmingly entertaining 70-plus years later. Though Cooper made a lot of westerns over the course of his multi-decade career, including such classics as The Plainsman and High Noon (which won him his second Best Actor Oscar), Along Came Jones is unique, because it allows him the chance to lampoon his strong, silent cowboy persona and play a hero who's not just reluctant, but bumbling, insecure, and inept, too.

The amiable, naive Melody Jones (Cooper) is a “tramp cowhand” who can’t draw a gun to save his life and avoids skirmishes like the plague, but when he and his loyal sidekick George (William Demarest) innocently wander into an Old West outpost called Payneville (pronounced “Pain-ful” by its residents), his boring life suddenly becomes more interesting than he ever dreamed. That’s because the townsfolk believe the M.J. initials embossed on Melody Jones’ saddle bag stand for Monte Jarrod (Dan Duryea), a ruthless bandit and killer who’s on the run from the law. Melody’s lanky physique and long face also resemble Monte’s, sparking a serious mix-up that puts the oblivious Melody and George in instant jeopardy.

Just in the nick of time, the quick-thinking and oh-so-attractive Cherry de Longpre (Loretta Young) intercedes and helps Melody and George flee to her country ranch. Yet her rescue isn’t as gallant as it seems. It turns out Cherry is Monte’s girlfriend and is hiding the wounded fugitive in her barn. She hatches a plan to deploy the dead-ringer Melody as a decoy to enable Monte’s escape, but Melody’s burgeoning affection for Cherry and concern for her safety continually foils it. Danger escalates, and as the mild-mannered Melody becomes further ensnared in Monte’s violent and deceitful web, he must steel his courage, face Monte’s enemies, and try to become a heroic figure if he hopes to ride off with Cherry into the sunset.

Before he became a director, Nunnally Johnson was an esteemed, Oscar-nominated writer, and he infuses his adaptation of Alan LeMay’s novel Useless Cowboy with plenty of character-driven humor. The comic overtones add notes of whimsy to the tale, but never trivialize the drama, romance, and action peppered throughout the screenplay. By merging the western and romantic comedy genres, Johnson - with a hefty assist from director Stuart Heisler - crafts a frothy entertainment that’s tender, endearing, suspenseful, and funny.

Cooper is a delight as Melody, embracing all of the cowpoke’s unenviable traits. His low-key, aw-shucks acting style both suits the shy, awkward character he portrays and brings an easygoing flair to the comedy. The wisecracking Demarest, everyone’s favorite second banana, makes a fine foil, supplying loads of color and sass that complement Cooper’s quiet grace, and Duryea seems right at home as the menacing Monte.

There’s quite a lot of testosterone in Along Came Jones, yet it’s Young who somehow steals the picture. Maybe it’s because she’s the only female in the cast or maybe it’s because she projects a winning sincerity - even when Cherry is lying and trying to manipulate poor, pliable Melody - but her natural performance and fresh-faced beauty constantly steal attention. Never a showy, histrionic actress, Young always played her roles from the heart, and her fine work elevates and enhances this minor film.

One of a handful of independent pictures Cooper made during the mid-1940s, Along Came Jones also stands as the only movie the actor ever personally produced. (The title card "Produced by Gary Cooper" takes one by surprise when it pops up during the opening credits.) In addition to assembling the aforementioned high-quality cast, Cooper corrals a crackerjack crew, whose talents help mask the film’s paltry budget. The shadowy cinematography by Milton Krasner, who would win an Oscar for Three Coins in the Fountain and earn five other nominations, heightens romantic tension and lends several scenes an attractive noir-ish look, while set decorator Julia Heron (a future Oscar winner for Spartacus) and costume designer Walter Plunkett (a future Oscar winner for An American in Paris) supply authentic western flavor to the proceedings.

Along Came Jones is the type of film that grows on you. At first glance, it seems a bit silly and trivial, but a good deal of texture and nuance lurk beneath the surface. The script and performances also gain more appreciation on a second viewing, making this western-comedy-romance hybrid a beguiling golden nugget. Yes, it’s a minor, even negligible film, but I’m glad to have Along Came Jones on the shelf. 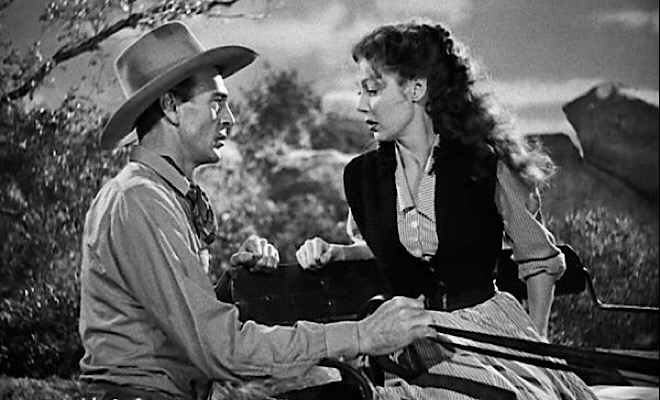 Along Came Jones arrives on Blu-ray packaged in a standard case. Video codec is 1080p/AVC MPEG-4 and audio is DTS-HD Master Audio 2.0. Once the disc is inserted into the player, the static menu without music immediately pops up; no previews or promos precede it.

Like many independent productions of the 1940s, Along Came Jones was not protected by a major studio archive, making it more susceptible to deterioration in the decades following its original release. ClassicFlix rescued the film and, according to title cards that precede the opening credits, performed "a 4K resolution transfer from the best available source." Though the restoration doesn't completely transform the picture, the results are quite good. The 1080p/AVC MPEG-4 rendering revitalizes Milton Krasner's cinematography, bolstering contrast and clarity and heightening detail levels. Grain is evident and though its intensity fluctuates, it provides welcome texture and lends the picture a lovely film-like feel. Black levels are rich and deep, whites are bright but don't bloom, and a nicely varied gray scale provides accurate shading. Some crush occasionally occurs during night sequences, but shadow delineation is generally strong and the checkered patterns of shirts and skirts remain rock solid throughout. Sharp close-ups highlight the weathered faces of Cooper, Demarest, and Duryea, as well as Young's alabaster complexion, and while the increased clarity calls more attention to rear projection work and painted backdrops, the benefits outweigh such drawbacks.

Unfortunately, despite the intensive clean-up ClassicFlix technicians performed on the print, a fair amount of speckling, a few vertical lines, and some intermittent damage remain (not to mention a couple of missing frames), but for a film that was so badly beat up, such lingering imperfections are both expected and easy to forgive. Along Came Jones surely has never looked better, and though the transfer isn't perfect, it's another stellar entry in the burgeoning ClassicFlix collection. Here's hoping the restorations continue...

The DTS-HD Master Audio 2.0 mono track sounds surprisingly good, despite its advanced age. Surface noise is evident throughout, with faint crackles and a couple of mild pops dotting the soundscape, but the imperfections never rise to distracting levels. Overall, the audio is well balanced and distinguished by a wide dynamic scale that handles all the highs and lows without any distortion creeping in. Good fidelity helps Arthur Lange's music score fill the room, and all the dialogue is clear and easy to comprehend. Sonic accents like bursts of gunfire, fisticuffs, and shattering glass are crisp and distinct, and more subtle nuances like chirping crickets and birds, footsteps, and horse hooves come through cleanly. Though far from pristine, this track performs better than expected and serves the film well.

Just a couple of supplements are included on the disc. Though two radio adaptations of Along Came Jones aired several months after the film was released - one allows Cooper and William Demarest to reprise their respective roles and one features Joel McCrea and Janet Blair - neither is included on this disc.

Along Came Jones will never gain the same renown as Gary Cooper's most famous western, High Noon, but this little-known curio about a "common, ordinary, useless bronc-stomper" who's mistaken for a ruthless bandit deftly combines comedy, romance, and action, and contains winning performances from Cooper, Loretta Young, and William Demarest. Though extras are slim, this 4K restoration from ClassicFlix yields a good-looking transfer that brings this long-forgotten western back from the dead. Fans of Cooper and Young will certainly welcome this high-quality release, but western or classics aficionados will find Along Came Jones worth a look, too.

Sale Price 29.99
Buy Now
3rd Party 27.99
In Stock.
See what people are saying about this story or others
See Comments in Forum
Previous Next
Pre-Orders
Tomorrow's latest releases