On a trip to France, millionaire Jervis Pendelton sees an 18 year old girl in an orphanage. Enchanted with her, but mindful of the difference in their ages, he sponsors her to college in New England. She writes him letters, which he doesn't read. After 3 years, he goes to visit her at a dance, not telling her that he is her benefactor. They fall in love, but the usual movie-type difficulties get in the way before they can get together at the end. ...Daddy Long Legs

In the 1950s, it seemed almost de rigueur for top male actors like Clark Gable, Gary Cooper, Humphrey Bogart, and Cary Grant to woo women less than half their age on screen. Films like 'Sabrina,' 'Love in the Afternoon,' 'Houseboat,' and 'But Not for Me' all depict hard-to-swallow May-December romances, and though musicals don't usually traverse such risqué territory, they weren't immune to the trend. Fred Astaire also partnered a couple of nubile ingenues late in his career, most notably Audrey Hepburn and, in the case of 'Daddy Long Legs,' Leslie Caron, who was a whopping 32 years his junior. (When the film premiered, he was 56, she was 24.) While the ageless Astaire can effortlessly appear a decade or so younger without even trying (thanks largely to his agile dancing), he can't completely erase the deficit, which is why director Jean Negulesco's light and airy tale of an older man's growing attachment to the college-age orphan he secretly sponsors still feels a bit creepy around the edges - especially in light of Woody Allen's real-life escapades.

"The heart wants what it wants" could be a fitting subtitle for 'Daddy Long Legs,' yet unlike similar films of the era, it doesn't ignore the elephant in the room. On the contrary, screenwriters Henry and Phoebe Ephron (Nora's parents) tackle the issue head-on, and some of their best one-liners address Astaire's elder statesman status and at least the perceived impropriety of a relationship with a woman young enough to be his daughter. Such frankness tempers the awkward situation and allows us to give equal attention to the splashier aspects of this sprightly - if bloated - CinemaScope musical, namely Johnny Mercer's lilting score and a couple of captivating dance numbers.

Based on the popular novel by Jean Webster, which spawned two previous film adaptations (a 1919 silent starring Mary Pickford and a 1931 talkie with Janet Gaynor), 'Daddy Long Legs' tells a heartwarming tale, but the 1955 version replaces maudlin sentiment with a refreshing dose of acerbic wit. The screenplay caters to the strengths of both Astaire and Caron, and provides some standout moments for a lively supporting cast.

Jervis Pendleton (Astaire), the black sheep of a very wealthy family, reluctantly travels to France on a diplomatic mission, but when his car breaks down on a country road, he seeks help at a nearby orphanage. There, he espies the lovely Julie Andre (Caron), an 18-year-old whose beauty and optimistic spirit instantly intrigue him. Jervis impulsively decides to sponsor Julie's education in the U.S., but to maintain proper decorum, he remains anonymous. His only requirement is a monthly letter from Julie (which she must address to "John Smith") apprising him of her scholastic progress.

Julie dubs her mysterious benefactor "Daddy Long Legs" (because the kids in the orphanage caught a glimpse of his distorted and elongated shadow and liken him to the imposing insect), and after she settles in at college, she begins writing the obligatory letters and fantasizing about what her adoptive "father" might be like. Jervis never reads the heartfelt notes that also address Julie's loneliness and insecurities, but his outspoken, sentimental secretary (Thelma Ritter) and frazzled chief of staff (Fred Clark) do, and they're both touched and disturbed by them. When they finally show Jervis the mountain of correspondence a couple of years later, he insists on taking a trip up to Walsten College to meet Julie, but vows to keep his true identity a secret.

Of course, once Jervis gets to know his captivating charge, he becomes smitten and decides to pursue her. She begins to fall for him, too, but his deception still hangs in the air and complicates their burgeoning and somewhat scandalous romance.

Astaire always said he liked 'Daddy Long Legs' because it allowed him to freely play his age. He certainly seems very much at ease most of the time, which is quite a feat, considering his beloved wife Phyllis died at age 46 right before shooting commenced. A devastated Astaire reportedly tried to back out of the film due to his overwhelming grief, but was convinced to soldier on and, true to his ardent professionalism, gives a charming, buoyant portrayal. He and Caron, who is also a delight, click well during their dramatic scenes, but as dancers their differing styles (ballroom vs. ballet) often seem at odds, and they never look completely comfortable on the floor together. (Reportedly, Caron was quite nervous about dancing with Astaire and concerned she wouldn't properly measure up.)

Not all the numbers work, but three are standouts. Astaire's all-too-brief solo dance to 'History of the Beat' during the opening scene may recall the 'Drum Crazy' number in 'Easter Parade,' but it's more focused and precise, while the elaborate 'Sluefoot' introduces what was hoped to be a new dance craze. Though it never caught on, it does allow Astaire and Caron the chance to show off some complex moves, and the large-scale staging nicely fills the wide CinemaScope screen. ('Daddy Long Legs' was Astaire's first CinemaScope film, and he often resisted pressure to choreograph dances that would flatter the new format.)

The most memorable song, however, is the classic 'Something's Gotta Give.' One of Mercer's finest melodies, with a pointed, punctuated lyric that fits the Astaire-Caron relationship like a glove, the tune is impeccably performed by Astaire and seamlessly segues into a graceful, elegant, and entrancing dance duet. It also beautifully complements the film's running theme, Mercer's ethereal 'Dream,' an old standard that was given new and immortal life by its inclusion in 'Daddy Long Legs.'

Unfortunately, the dream theme ends up sabotaging the film. Two lengthy ballet sequences that stem from Julie's reveries stop the story cold and inflate the production's running time. The first showcases Astaire and is tolerable enough, but the second one, a solo spot for Caron during the tale's last act, brims with pretense and is just plain dull. Due to the influence of 'An American of Paris' several years before, ballets had become required elements in movie musicals, presumably to add sophistication and spectacle (Astaire would memorably lampoon the trend, which he hated, in the 'Stereophonic Sound' number in 'Silk Stockings' a couple of years later), but most are colossal bores, and the ones in 'Daddy Long Legs' severely disrupt the film's flow.

At 126 minutes, 'Daddy Long Legs' is about 20 minutes too long (hmmm…about the length of the two ballets), and though the story holds our interest, the varying quality of the musical numbers prevents the movie from hitting a home run. Frankly, Astaire just doesn't dance enough for my taste, and unlike Cyd Charisse, Caron can't sufficiently pick up the slack. (Interestingly, 'Daddy Long Legs' would prove to be Caron's last dance picture and penultimate musical.) Though charm, sweetness, and a dash of wit take this film a long way, they can't quite get it over the hump. 'Daddy Long Legs' is still a solid Astaire musical, just not one of his best.

As the song says, "something's gotta give," and, unfortunately, in this case, it did. 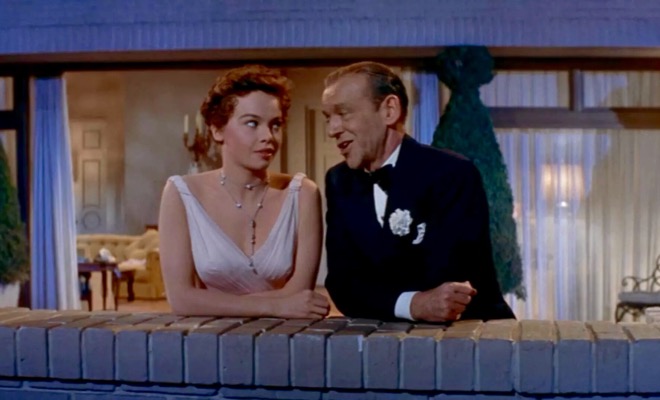 'Daddy Long Legs' arrives on Blu-ray packaged in a standard case. Video codec is 1080p/AVC MPEG-4 and audio is DTS-HD Master Audio 2.0 stereo. Though the packaging lists the feature's running time as 91 minutes, it's really 126 minutes, and though it lists the film's aspect ratio as 1.85:1, it's really 2.40:1. Worst of all, it lists the release date as 1972 instead of 1955. (Geez, Kino, where's the proof-reading and quality control?) Once the disc is inserted into the player, the static menu with music immediately pops up; no previews or promos precede it.

Musicals need to look splashy, and this 1080p/AVC MPEG-4 transfer often does. Vivid, lush colors, especially blues and reds, lend the image notable vibrancy, while strong clarity and contrast heighten the picture's presence. Grain is evident, but never overpowering, and though sone scenes appear a bit softer than others, the transfer is fairly consistent throughout. Black levels are rich, whites are bright, patterns resist shimmering, and flesh tones look natural enough. Due to the (very) wide aspect ratio, close-ups are sparingly employed, but they exude a good amount of detail, highlighting Astaire's angular features and Caron's fresh-faced loveliness. Best of all, only a couple of errant nicks and marks dot the pristine source material. No noise or crush creep into view, and digital enhancements have been judiciously applied. While this is far from the best Golden Age musical transfer I've seen, it's still an impressive effort, and fans of the genre should be pleased with this high-quality rendering.

The DTS-HD Master Audio 2.0 stereo track provides clear, well-modulated sound that serves this sprightly musical well. Noticeable stereo separation across the front channels widens the soundscape and lends a directional touch to several dialogue exchanges, while the robust orchestrations flaunt a lovely depth of tone and fill the room with ease. Astaire's lilting singing voice comes across well, atmospherics are nicely defined, and most of the conversations are easy to comprehend. A wide dynamic scale handles all the instrumental highs and lows without a hint of distortion, and no age-related hiss, pops, or crackles intrude. All in all, this is a fine track that fully embraces this classic musical.

Except for the stills gallery, all the extras from the 2006 Fox DVD have been ported over to this Blu-ray release.

No one would rank 'Daddy Long Legs' among Fred Astaire's greatest musicals (namely because he doesn't dance nearly enough), but a good deal of charm, humor, and style permeate this colorful production. The tale of a young woman's romantic fascination with her much older anonymous benefactor runs a bit long and contains one ballet sequence too many, but it does give Astaire the opportunity to dance with the captivating Leslie Caron and sing one of Johnny Mercer's best tunes, and those elements alone make the film worthy of attention. Kino Lorber's Blu-ray presentation features beautifully restored video and audio transfers that showcase Astaire's vocal and terpsichorean talents, as well as a couple of interesting supplements. More Astaire on Blu-ray is always a good thing, and though 'Daddy Long Legs' doesn't thrill the senses like other Astaire movies, it's still entertaining, well made, and worth a look, especially for musicals fans.