In a career-defining performance, Alain Delon plays Jef Costello, a contract killer with samurai instincts. After carrying out a flawlessly planned hit, Jef finds himself caught between a persistent police investigator and a ruthless employer, and not even his armor of fedora and trench coat can protect him. An elegantly stylized masterpiece of cool by maverick director Jean-Pierre Melville, Le samouraï is a razor-sharp cocktail of 1940s American gangster cinema and 1960s French pop culture—with a liberal dose of Japanese lone-warrior mythology.

A man with handsome but stern features steps outdoors wearing a classic film noir trenchcoat and fedora. Rather than 1940s Los Angeles, the setting is 1967 Paris. Spying an opportunity, the man slips into a recently parked car and removes a key ring from his pocket. On it are dozens of similar keys, very likely spanning all the possible ignition locks for cars of this model. The man is obviously a professional. His actions are careful and efficient. Slowly and calmly so as not to attract attention, he tries the keys one at a time, his head up and his eyes alert to the world around him. Finding one that works, he swiftly pulls into traffic and drives to a garage where an accomplice is waiting. They say nothing to each other as the second man gets right to work changing out the license plates and handing over falsified registration papers, plus a loaded gun. Fully ten minutes of screen time go by before anyone says a word in Le samouraï, and the first lines are less an eloquent or impassioned monologue than a terse and pragmatic exchange of required information. These people mean business.

Despite its fanciful title, Le samouraï has no actual Japanese samurai in it, but the protagonist, Jef Costello (Alain Delon), is a warrior of sorts. He lives a spartan existence and obeys a strict code of conduct and honor. When he's paid to do a job, the job always gets done. He has no use for sentiment, emotion or personal relationships beyond those that facilitate his ability to complete his assignments.

To that end, his next assignment is the murder of a nightclub owner. He coldly accomplishes this as planned, but his face is seen on the way out by the club's lovely young pianist (Cathy Rosier). This complicates his getaway. Although Costello set up a strong alibi involving a mistress (Nathalie Delon, the actor's wife), and the other witnesses are unreliable, a shrewd police detective (François Périer) hones in on him among a host of other suspects and just won't let his suspicions go.

At this point, the film becomes something of a procedural, systematically revealing how the criminal (the presumptive hero of the piece) covered his tracks and how the detective (his antagonist) attempts to unravel his machinations. Both are clever men, each too smart to be outwitted by the other. I have no idea whether the details of policework in 1960s Paris are at all realistic or have been exaggerated for effect, but they make an almost surreal contrast with the expectations for a modern investigation. Witnesses sit in clear view of the suspect lineup and openly discuss amongst each other with no hope of anonymity while the men they're accusing listen and glare menacingly at them. This seems like a plainly bad idea, but it's presented in such matter-of-fact terms that the thought of questioning it hardly occurs. Ultimately, the pianist will decide Jef's fate, both in choosing whether to identify him or not, and in his response to that action. 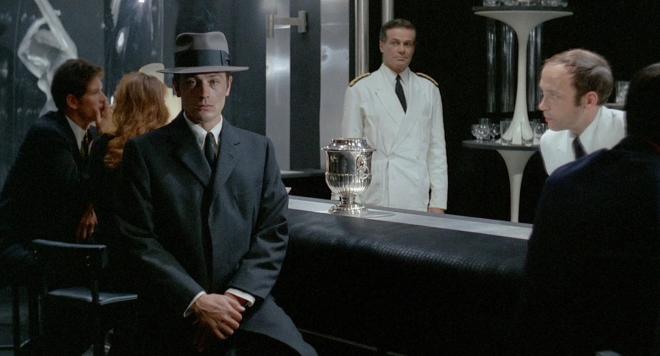 Like many prominent artists in the French New Wave, director Jean-Pierre Melville (Army of Shadows, Le cercle rouge) was greatly inspired by classic Hollywood movies. The film noir influence is unmistakable here. From the title, Japanese cinema was clearly on his mind as well. Both were then filtered through his own personal style and French sensibilities to create an idiosyncratic crime thriller that comments on and deconstructs the genre, stripping familiar formulas down to their barest elements and then putting the pieces back together in an unexpected order.

The film is so effective that it proved immensely influential in its own right. Echoes of it reverberate through Walter Hill's The Driver, Michael Mann's Thief and Heat, and John Frankenheimer's Ronin, among others. John Woo calls it his favorite movie and freely cops to ripping off chunks of the plot for The Killer. All of these feature hyper-competent, no-nonsense criminals whose rigidly ordered lives are disrupted by a job that goes wrong in ways they can't control.

Given fifty years of imitation, Le samouraï may not seem quite so groundbreaking when watched for the first time today. Many of its traits have become genre staples in the meantime. Nevertheless, the film's style, attitude, and thematic underpinnings remain vital and entertaining. So much distance from its original release also gives the movie a time capsule quality. Melville shot extensively on location, and watching cinema icon Alain Delon navigate the real streets of Paris feels like stepping back to one of the greatest cities in the world during an era long past.

The Criterion Collection first released Le samouraï on DVD in 2005. Although a high-definition upgrade didn't follow for 12 years, the Blu-ray retains the label's original numbering convention as spine #306. A new DVD has also been reissued to correspond with the Blu-ray.

The movie comes packaged in one of Criterion's clear keepcases. A booklet includes essays by critic David Thomson and filmmaker John Woo, as well as an excerpt from the 1971 interview book Melville on Melville. The disc has a simple menu, but the Subtitle On/Off selection is confusing. The color highlight is not clear which option has been chosen.

I don't have the original Criterion DVD to compare, so I'm not sure whether the Blu-ray (and the 2017 DVD) have been remastered or were struck from the same master created for that 2005 disc. Although the Blu-ray packaging boasts of a "New high-definition digital restoration," Criterion's definition of "new" is unfortunately far from reliable. The liner notes in the Blu-ray booklet don't clarify this, other than to state that the transfer was scanned from the original camera negative and a 35mm interpositive. When this was done and how much comes from each source are not specified. Reading between the lines, the work appears to have been performed by a firm in Paris called VDM, from which Criterion licensed the master without direct involvement in its creation.

Image quality of the 1080p/AVC MPEG-4 encode is generally excellent but sometimes variable. The studio trailer before the feature looks like garbage, and the movie's first scene is very dark and grainy. (Opticals printed on top of it don't help.) The 1.85:1 picture improves once the action moves into daylight. Some scenes are sharp and clear with a vibrancy that feels like stepping right into Paris in 1967. Others are grainy and suffer drab colors. Night scenes in particular are almost always heavily grainy, but so are some day scenes. I can't be certain whether this has always been the nature of the movie's photography, or if these fluctuations are the result of some film elements being in better condition than others.

The impression I have overall is that the parties responsible for the video master made a good faith effort to perform a quality transfer of the best available materials. I cannot say whether the picture might look better with another restoration effort in the future or if this is as good as it gets. Thankfully, the majority of the film looks very nice.

I noticed no distracting digital processing. Unlike Criterion's recent Blu-ray edition of Michelangelo Antonioni's Blow-Up (another European production from the same time period), the image here is free of edge halos, which makes me question that other disc even more. 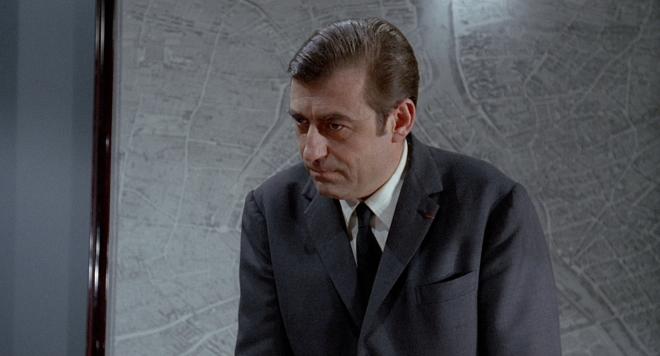 The uncompressed PCM soundtrack is excellent. For a mono track from 1967, the film's sound mix is surprisingly robust. Car engines provide hearty bass. Music and most sound effects are delivered with very good clarity and fidelity. Scenes on city streets are atmospheric despite all coming from a single channel.

Gunshots (of which the movie only has a couple) are perhaps a bit harsh. They're loud but not necessarily realistic. That's forgivable considering the era.

This is a French movie made in France starring French actors. All dialogue is in French. Optional English subtitles have been provided. 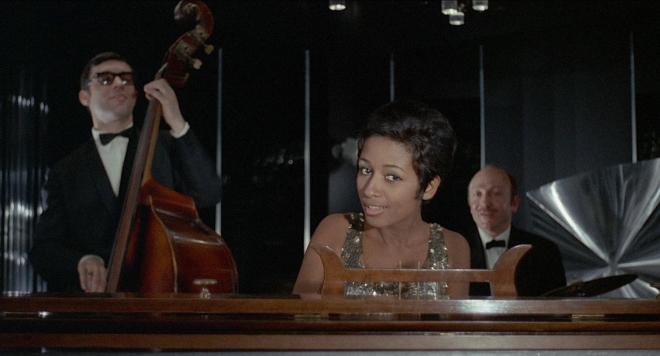 The original Criterion DVD for Le samouraï didn't have a huge volume of content, but what it offered was all interesting. The Blu-ray (and reissued DVD) carry over that material plus add one new item. 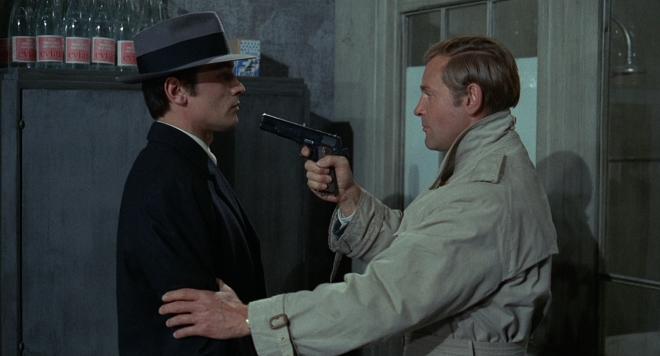 Although the Melville-Delon feature did not appear on the 2005 DVD, it can be found on the 2017 reissued DVD. Therefore, the Blu-ray as no exclusive content.