In 1966, Michelangelo Antonioni transplanted his existentialist ennui to the streets of swinging London for this international sensation, the Italian filmmaker’s English-language debut. A countercultural masterpiece about the act of seeing and the art of image making, Blow-Up takes the form of a psychological mystery, starring David Hemmings as a fashion photographer who unknowingly captures a death on film after following two lovers in a park. Antonioni’s meticulous aesthetic control and intoxicating color palette breathe life into every frame, and the jazzy sounds of Herbie Hancock, a beautifully evasive performance by Vanessa Redgrave, and a cameo by the Yardbirds make the film a transporting time capsule from a bygone era. Blow?Up is a seductive immersion into creative passion, and a brilliant film by one of cinema’s greatest artists.

For a filmmaker whose signature themes include such heavy, potentially depressing topics as ennui, emotional disenfranchisement, and the vacuousness of contemporary lifestyles, Michelangelo Antonioni somehow came to represent a certain sense of trendy art-house chic in the early 1960s. Hip audiences (the sort who would watch a subtitled Italian art film in the first place) revered him as a master of challenging works that were rich with intellectual and philosophical substance while still letting them enjoy the spectacle of beautiful people in foreign locations. Following the success of his so-called Alienation Trilogy, the director headed to London for his first English-language production. The arty mystery thriller Blow-Up was one of Antonioni's most mainstream-friendly efforts (let's be honest, one of his very few mainstream-friendly efforts), his biggest commercial hit, and remains his most celebrated movie. It's also a genuine masterpiece.

David Hemmings stars as a professional photographer who discovers a terrible secret hidden in an innocent photo he snapped in a park. While wasting time between fashion shoots and hoping to stumble upon a random inspiration, his character, Thomas, spots a couple frolicking in the distance. Appreciating the image, he surreptitiously takes a bunch of shots of the scene, planning to use them in some future photo spread. When the young woman (Vanessa Redgrave) notices what he's doing, she begs him for the camera negative. Assuming that perhaps she's having an affair with the man and is just worried about being caught, he refuses, not particularly caring about her personal troubles. However, when he examines the photos later, he becomes obsessed with an indistinct image in the bushes, which he believes may be a figure holding a gun. Did he just stumble upon a murder scheme? How can he confirm this, and is there anything he can do about it?

Another movie would turn this into a race against time to either stop the assassination or at least to uncover the killer (as Brian De Palma did in his later homage to this film, Blow Out). But Antonioni isn't especially concerned about the thriller mechanics. His idea of a suspense set-piece is to have his character stand in a park and listen to wind blow through the trees. This is a deliberately slow, contemplative movie. Antonioni uses the plot only as a framework to ask unanswerable questions about the nature of truth and reality. The film's title, of course, refers to the process of magnifying a photograph, but also of the way a seemingly innocuous action can have unintended consequences, and of the way Thomas' life is shattered by what he finds. 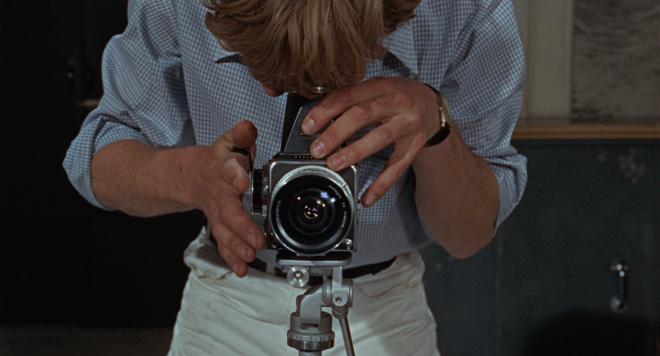 Thomas starts the movie as, frankly, a callous asshole. He has no relationships or feelings for others. His main job as a fashion photographer trades in frivolous superficiality, and he doesn't seem to care much about it. He considers the beautiful women he's surrounded by as just objects – both at work, where he rudely treats them as props, and after work, when he uses them as disposable sexual playthings. In the film's most famous (and oft-parodied) scene, these behaviors converge, and his camera becomes a symbolic instrument of aggressive seduction until, his energies spent, Thomas finishes and walks away, leaving his partner unsatisfied.

Later, he tries to shop a book of more serious and somber photojournalism to a publisher, but even in this, his interest appears to be more about career advancement than passion for the subject. To him, both types of photos are commodities.

His work also allows Thomas full control over not just his life, but of the world itself. In his photo shoots, he creates the reality and frames how it will be seen by others. This power dissipates when he realizes that he allowed a life-or-death plot to unfold right before his eyes without noticing it. No matter how distraught it makes him, he's powerless to prevent it or to solve the mystery.

Ultimately, Antonioni provides no easy answers. The film is consciously designed as an enigma, not a puzzle that will ever have a perfect solution. By its baffling, brilliant ending, both the character and the audience are left wondering what reality even is, and if an abstract concept such as truth really exists or can ever be known.

Michelangelo Antonioni is a favorite filmmaker of the Criterion Collection, which previously released his Le amiche (1955), L'avventura (1960), La notte (1961), L'eclisse (1962), Red Desert (1964), and Identification of a Woman (1982) on DVD and Blu-ray. Blow-Up was first released by Criterion way back in 1988 on the Laserdisc format. The movie rejoins the Collection now as spine #865, under license from Warner Brothers. A corresponding DVD edition is available separately.

The Blu-ray comes packaged in a fold-out digipak within a cardboard slipcover. Also inside is a thick booklet with three essays about the film and a questionnaire that Antonioni had posed to professional photographers as part of his research. All references to the movie's title on both the case and booklet spell it with a hyphen in the middle, even though the on-screen title is spelled as "Blowup" in the film itself. The disc menu features extensive clips from the movie that practically tell the entire plot in condensed form.

I'm perplexed by the Blu-ray I was sent for review. The liner notes in the accompanying booklet claim that the video transfer was sourced from a 4k scan of the original camera negative and a 35mm interpositive. I wouldn't have guessed that based on the results. The Blu-ray's 1080p/AVC MPEG-4 encode is very soft, grainy and drab. The image is also plagued with pervasive edge halo artifacts. 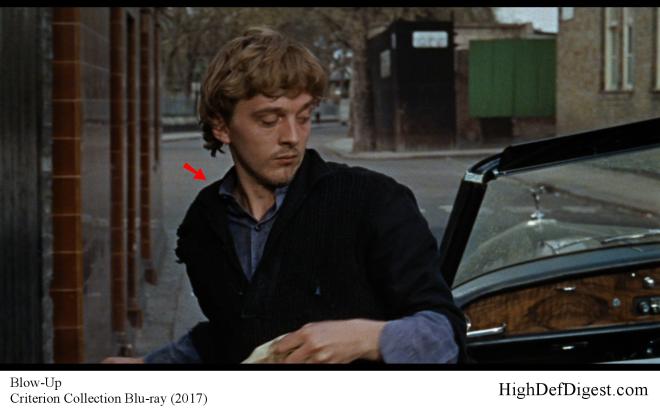 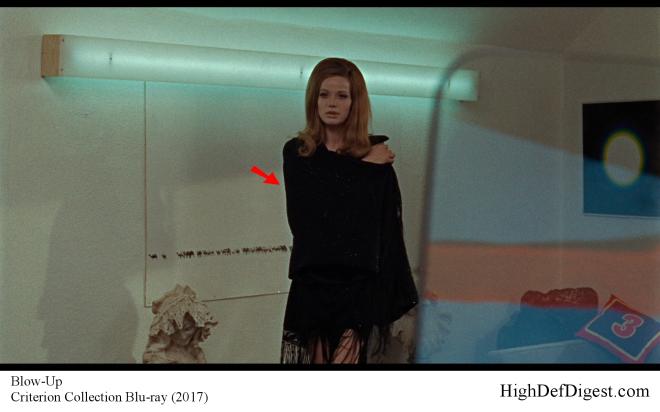 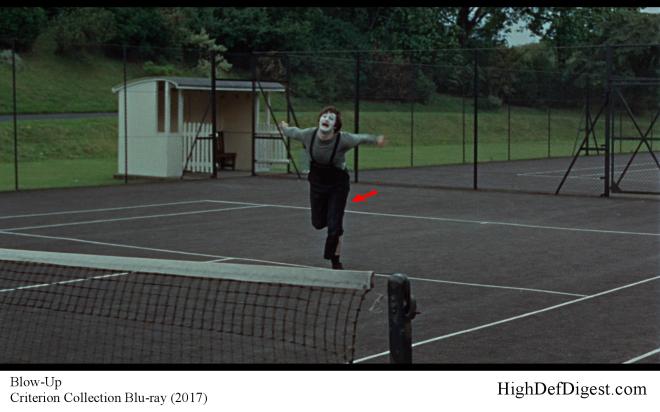 While watching the disc, I assumed that Warner Bros. must have supplied Criterion with an antiquated master prepared back in the earliest days of high definition video. I was shocked to read afterwards that this is a new transfer supervised by Lee Cline of the Criterion Collection. Based on the many other excellent Blu-rays that Cline has prepared for Criterion, I can't imagine that he would intentionally add crude electronic sharpening to the transfer.

I've conversed on this subject briefly with film restoration specialist Robert A. Harris, who wasn't involved with this specific movie but has worked with Criterion on other projects. He believes that these halos are likely a film artifact rather than a digital artifact, and may be endemic to the source materials. If that's correct (it's still a working theory at the moment), the issue was probably not as visible on the original theatrical prints, which were a few generations removed from the negative.

Whatever the real cause may be, these edge halos appear frequently enough to be distracting. Combined with the very soft details and coarse grain, I found the picture quality of the Blu-ray to be a disappointment. It seems unlikely to me that Antonioni, who was renowned as a meticulous perfectionist about every aspect of the images he created, would have intended the movie to look like this.

Decidedly not an error, however, is the disc's aspect ratio. The 1.85:1 framing is accurate to the film's theatrical release, even though the matting crops out some nudity from the bottom of the screen in Vanessa Redgrave's scenes. Viewers who first encountered the movie via old full-frame VHS transfers may be disappointed that the actress' breasts are no longer exposed on screen – nor were they ever meant to be. In the interview included in the disc supplements, Redgrave explains that she was extremely self-conscious about her figure after having two children and would not have consented to doing on-screen nudity.

Fortunately, the Blu-ray's audio is fine. For a mono soundtrack from 1966, the uncompressed PCM on the disc is surprisingly robust. Dialogue and sound effects are suitably crisp and intelligible. The jazzy musical score by Herbie Hancock has nice, clear highs. Although bass extension may be limited on the low end, it sounds appropriate for the era.

At times, the soundtrack is clear enough to hear variances in the quality of the production audio. Certain patches of dialogue may have elevated background noise or hiss on the original recording. This is not a fault of the Blu-ray.

Blow-Up has a fascinating sound design that uses silence and subtle ambient noises (e.g. the rustling of tree leaves in the breeze) as effectively as other types of movies might use blaring music or explosions. That dynamic is captured extremely well here. 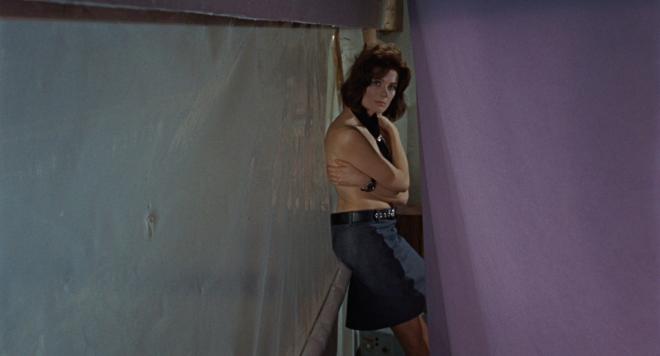 All of Criterion's bonus features for the film are shared by both the Blu-ray and DVD editions. 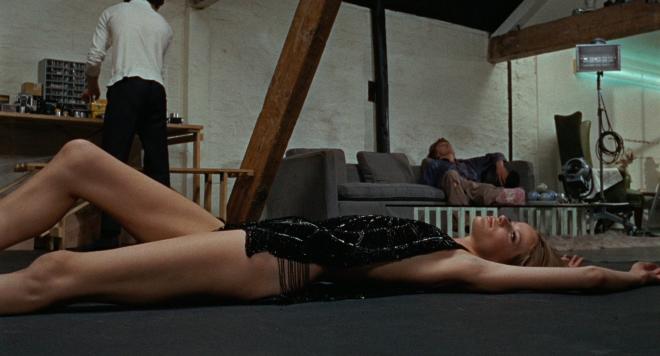 The Blu-ray has no exclusive features.

The old Criterion Laserdisc included the complete text of the short story "Las babas del diablo" by Julio Cortázar, which is credited as inspiring Antonioni's film. That has not been reproduced here.

Blow-Up is a landmark of 1960s cinema that still has plenty of power to captivate. Unfortunately, the Criterion Blu-ray isn't quite everything I hoped it would be. Whether it's the fault of the source material or of the video transfer, I found the picture quality disappointing. I have a hard time believing that this is really the best the movie could look. On the other hand, the disc includes some very interesting bonus content. It's worth a qualified recommendation, with some caveats.

Sale Price 21.84
List Price 39.95
Buy Now
3rd Party 19.99
In Stock.
See what people are saying about this story or others
See Comments in Forum
Previous Next
Pre-Orders
Tomorrow's latest releases