Fronted by Steve McQueen and Faye Dunaway at the height of their star power, Norman Jewison's The Thomas Crown Affair is a blast of 1960s style and verve. The 50th Anniversary Edition from Kino Lorber is a big step up over the last Blu-ray from MGM. Recommended.

Just two months after his topical, politically-charged race relations drama In the Heat of the Night collected five Oscars including Best Picture, director Norman Jewison already had a new movie in theaters. The follow-up, however, was a bit lightweight in comparison. Over the years, Jewison himself has had no qualms about describing his crime caper The Thomas Crown Affair as a simple lark and a case of style over substance. The film happens to be very good at those modest goals and has successfully endured as a piece of breezy entertainment for five decades and counting.

Steve McQueen stars as the Thomas Crown of the title, a wealthy and powerful Boston businessman. The nature of his business isn't clear, beyond giving him an excuse to smoke cigars and look dapper in three-piece suits, but he's apparently good at it and is treated as a very important man. Thomas Crown is also a criminal mastermind who orchestrates a bank heist carried out by a collection of accomplices unaware of their boss' identity. His motivation is not to pay off secret debts or hide any corporate failings. He actually doesn't need the money at all. He steals it mostly out of boredom, or perhaps some resentment for the very system that made him rich. The elaborate robbery is a game to him, and Crown cherishes his victories no matter how little the prize benefits him personally.

When the local Boston police prove unable to crack this case on their own, lovely and fashionable insurance investigator Vicki Anderson (Faye Dunaway, just one year following her breakout role in Bonnie and Clyde) arrives on the scene to boss them around. She quickly pegs Crown as a suspect and even tells him as much. Crown essentially dares her to catch him, greatly enjoying the game of cat-and-mouse that follows, which soon turns to flirtation and seduction. Even as they fall for each other, the two refuse to yield their positions. Love or no love, Vicki will still arrest Crown if she can catch him, and Crown plots another, very similar robbery just to prove to her that she can't. 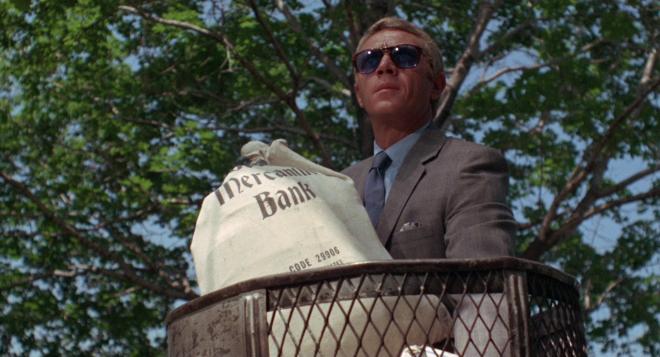 By 1968, Steve McQueen was perhaps the defining icon of cool in Western popular culture, and the movie certainly plays up that angle. His character has little depth beyond being handsome, charming and mischievous. At the same time, the film toys with his established screen image. He reportedly took the role simply because he'd never worn a suit on camera before (he typically played more roguish types), and he thought it would be fun to play a white collar captain of industry for a change.

Fun is the order of the day in The Thomas Crown Affair. The film has just a wisp of a plot and most of the details of the robbery schemes are so vague as to willfully defy scrutiny. Even the characters' love affair seems pretty far-fetched. The story makes barely enough sense to resist giving it much thought, and not one bit more. But the stars are glamorous and have great chemistry. They wear chic clothes and look fabulous while they banter playfully. Jewison keeps the whole thing moving at a jaunty clip via numerous split-screen montages and other fancy directorial and editing tricks that were trendy at the time, seemed dated a few years later, and have now come back around to looking inventive again.

The fact that this movie is 50-years-old now is an asset. It's very much an artifact – no, a monument – of a specific era in filmmaking and pop culture. Watching it is like traveling to a time and a place that never quite existed as depicted (1968 was a particularly turbulent year in world affairs, none of which is hinted at here), where everyone is impossibly stylish, smart, witty, and rich. In many ways, that makes it even more entertaining to watch now than it may have played when originally released.

The Thomas Crown Affair first came to Blu-ray in 2011 in what sadly amounted to an underwhelming MGM catalog title. That disc featured a dated video transfer and a very thin selection of bonus features. For its 50th anniversary, Kino Lorber has licensed the film and granted it a nicer package that offers improvement in most respects.

The disc itself has a simple static menu duplicating the case art (in the style of a vintage poster). The "Windmills of Your Mind" theme song plays in a loop over the menu, which proves annoying and distracting given that it's also the very first thing heard when you play the movie.

Kino Lorber's publicity states that the 50th Anniversary Edition of The Thomas Crown Affair was sourced from a "brand new 4k restoration," presumably provided by the rights owners at MGM. In comparison to MGM's own Blu-ray from 2011, improvements are obvious and significant. The old disc was watchable but very soft, sometimes even blurry. The new 1080p/AVC MPEG-4 transfer (framed at the theatrical 1.85:1 aspect ratio) is decidedly sharper and more detailed, especially in close-ups, which are frequently excellent. 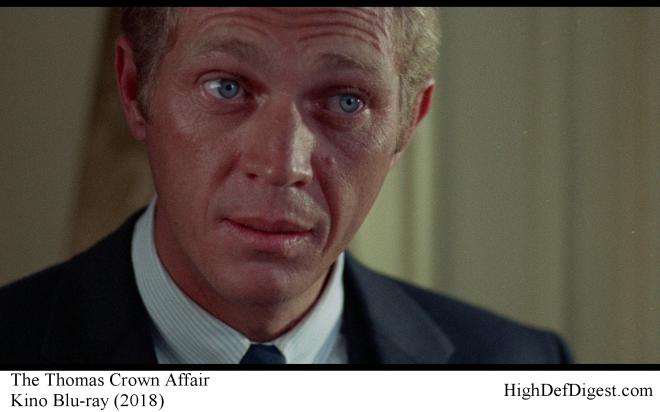 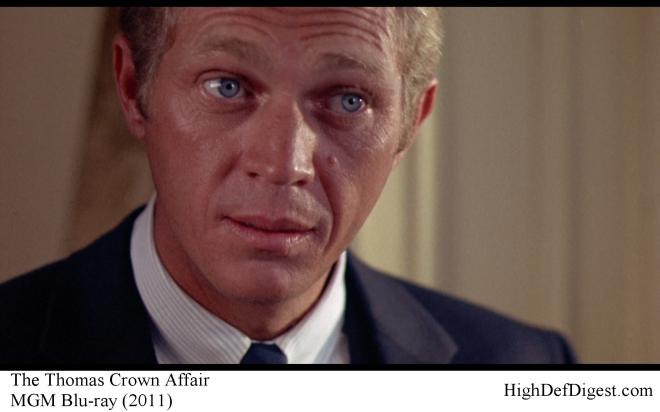 The famous chess match seduction scene has exceptional clarity and vividness, exposing every individual eyelash, eyebrow hair, and skin pore on both actors' faces, the effect of which draws you closer to the emotions of the moment. 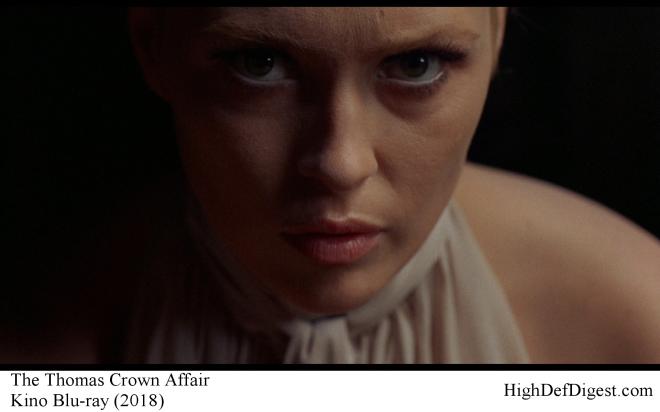 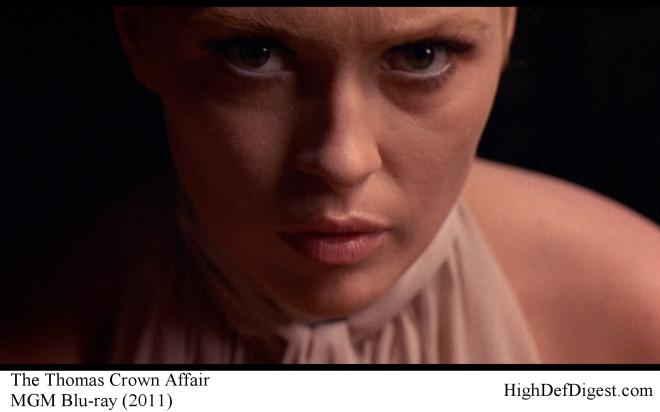 Not every scene is quite so vibrant, however. The movie has an abundance of split-screen optical effects that, due to the analog nature of the way they were created, are still very soft, grainy, and frequently have dirt or hairs embedded in the composites. Even outside of those, other sections of the film exhibit sporadic damage, scratches, or flashing. Some may be endemic to the original production, or some may be age-related. Nevertheless, issues like these are generally minor and forgivable (or at least excusable). This is a very nice presentation for the movie.

The two discs also have differences in color and contrast. In most cases, the new 50th Anniversary Edition looks a bit cooler but richer and more refined. At other times, flesh tones might be a little too orange, and in a few instances the colors differ so wildly between the two discs that I can't be certain which is actually more accurate to the original theatrical release. 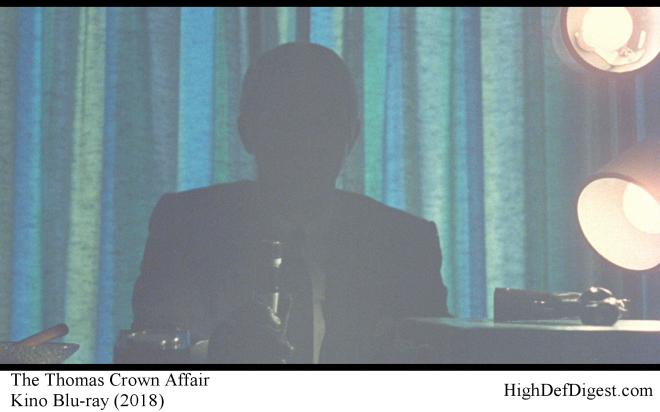 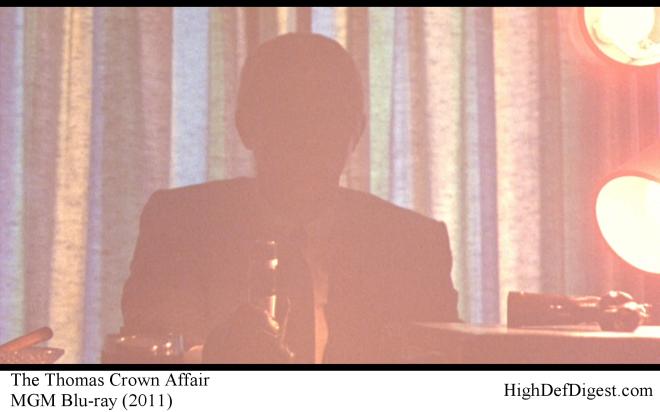 Regardless, the Kino disc is decidedly better in enough ways that fans will find it a worthy upgrade from the old copy.

Keeping in mind that the movie is 50-years-old, the Blu-ray's audio quality is reasonably good. The DTS-HD Master Audio mono track is clear and intelligible, with a fair amount of throbbing musical bass in the score and theme song. The engine of Crown's dune buggy provides a nice growl.

Unfortunately, the theme song also sounds a little hollow, and the audio in general seems thin. As a mono mix, it's obviously center focused. The dynamic range is limited and the fidelity is often bright. Listening closely, you can hear some analog tape hiss and warble.

None of this is to say that the soundtrack is deficient or poorly mastered. It's good for what it is, but unquestionably suffers some limitations of its age. 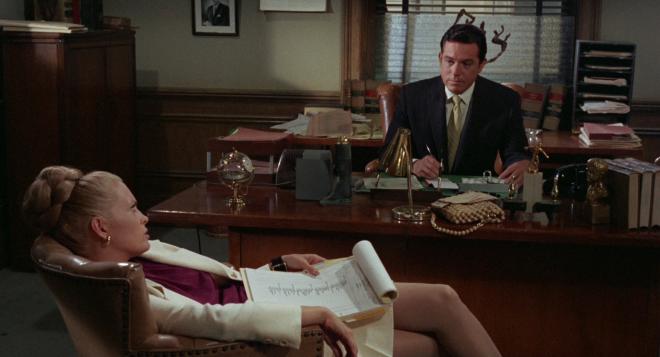 The prior Blu-ray from 2011 was very sparse with its bonus content, offering only a director's commentary and a trailer that were both carried over from DVD editions dating back to 1999. The Kino disc retains both of those and adds a few new items of interest. 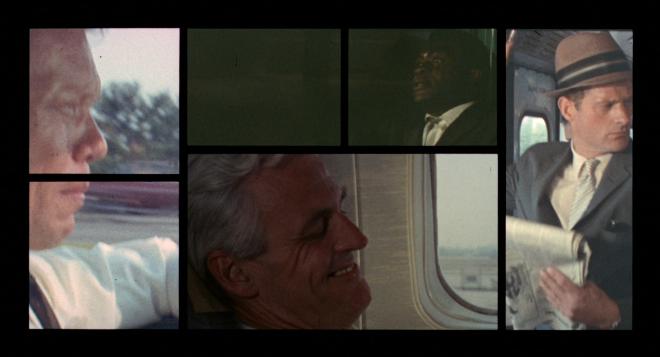 The Thomas Crown Affair is not a film to be taken seriously, but it has held up as a light and fun romantic caper with very appealing leads and plenty of 1960s style to spare. (The 1999 remake with Pierce Brosnan and Rene Russo is pretty good too.)

Kino's 50th Anniversary Edition looks significantly better than the prior Blu-ray release and adds a few interesting new supplements, all at a pretty reasonable price. Fans will want to scoop this up.

Sale Price 16.8
List Price 29.95
Buy Now
3rd Party 14.99
In Stock.
See what people are saying about this story or others
See Comments in Forum
Previous Next
Pre-Orders
Tomorrow's latest releases