The long running debate between style and substance is a topic as old as art itself. Which is more important, the actual content, or the specific manner in which the content is presented? Most truly great films seem to find a special balance between the two, creating an equilibrium that sees narrative and form mingle in meaningful harmony. Other lesser efforts tend to favor the story itself and neglect the unique and important visual techniques that define filmmaking. Norman Jewison's 1968 film 'The Thomas Crown Affair' is an example of yet another common trend, that of style over substance. While some films of this nature can rise above the shallowness of their plots through deep, insightful, formalistic flourishes, 'The Thomas Crown Affair' falters with mostly superficial visual and editing choices, that while interesting, never really come together as well as one would hope.

The story itself is a rather simple caper about a wealthy business man named Thomas Crown (Steve McQueen) who organizes a complicated bank robbery using several individuals who have never actually seen his face. He does this, seemingly just for the thrill of the heist. Though the robbery is a success, complications arise when an attractive insurance investigator (Faye Dunaway) suspects Crown and the two develop feelings for one another. (Sound familiar?) Though McQueen and Dunaway have great chemistry and play off each other well in their numerous scenes together, the overall plot is underdeveloped. Thomas Crown himself oozes cool and radiates confidant sophistication, but one never really gets much of a sense for him beyond these mere surface attributes. This may have been intentional, so as to maintain an air of mystery and intrigue, but it never makes for a very compelling story. Like the filmmaking, the character is all flashy surface, with very little lurking in his core. The cat and mouse romance that forms between investigator and criminal is a bit rushed and the conclusion of the film left very little impact due to my lack of emotional investment in either one of them. To combat these shortcomings in story, Jewison attempts to provide a few extra bits of substance with his filmmaking choices, to varying degrees of success.

Inspired by the films of Alfred Hitchcock and the French New Wave, 'The Thomas Crown Affair' is brimming with style. Split screen is used quite effectively to set up the complicated opening bank heist, forging a visual chess board featuring all of Crown's human pawns as they are moved meticulously into place. Use of sound is also important with some creative implementation of pre-lapping and post-lapping of effects and dialogue to bridge cuts and imply meaning. The famous chess scene is also a highlight and is a true gem of film editing and composition that creates a sensual, elegant, and playful sequence of innuendo and romance. Unfortunately though, even with all these visual and editing tricks and techniques, the vast majority of the film's style comes off as fairly superficial and meaningless, used only to try and make up for the lackluster story and development. Though there are times when the style does indeed enhance the content in insightful ways, these occurrences are disappointingly rare.

Overall, 'The Thomas Crown Affair' is an interesting but ultimately unsatisfying experimentation of style and editing that features good performances and an occasional stand out scene or two. Though the form is at times inventive and exciting, like the story, it never really adds up to much. In the end, one gets the impression that the filmmakers just didn't really have a lot to say, leading to a mostly disposable viewing experience. 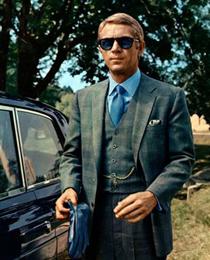 Provided with a 1080p/AVC MPEG-4 transfer in the 1.85:1 aspect ratio, the video here is quite erratic. Most of the film, especially in the earlier scenes, has an extremely soft appearance with a fuzzy almost out of focus quality. Fine detail and depth are almost wholly absent in these instances. Grain is frequent but sometimes exhibits an unnatural blotchy look. The print itself is in decent shape, but there are instances of specks, dirt, and other signs of minor damage.

On the bright side, there are indeed sequences that look quite good. The famous chess scene in particular, has a great sense of depth and features sharp details. Close ups of both McQueen and especially Dunaway look exceptional here. Colors are vibrant and pop throughout and contrast, black levels, and shadow detail are all good.

It's a shame that the picture quality here is so inconsistent. When it looks good, it really is very pleasing. I'm not sure if the softness is a result of how certain scenes were shot, or a fault of the transfer itself, but either way the video here is just too uneven, resulting in an average presentation. 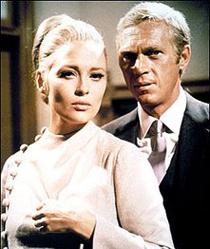 MGM and Fox have included a whopping seven audio tracks here not including the commentary. There's an English Mono DTS-HD Master Audio track, along with Spanish, French, Portuguese, German, Italian, and even Castilian tracks all in Dolby Digital Mono. Subtitle options include English SDH, Spanish, French, and Portuguese.

Though it's labeled a mono track, my player did detect two channels but they did not sound distinct. With the inherent lack of directionality in mind, the audio here is still good. Dialogue has a somewhat hollow quality to it but is clean and easily understandable. Dynamic range is surprisingly robust with certain music cues and effects rising quite a bit more over others. Bass is mostly absent but can jolt in every now and then. Again, there is of course no directionality, but balance between elements is even.

Though only a mono track, the audio serves the film well and accurately represents the movie. A new stereo or surround track made under the right conditions may have added another level of immersion, but what's here sounds fine.

'The Thomas Crown Affair' is a decent caper film that suffers from an underdeveloped script that tries to mask its problems in an over abundance of stylistic decadence. Unfortunately, it only marginally succeeds in that effort. The video is quite erratic and the audio is fairly flat, but both still manage to serve the film well. Extras are slim, but the commentary is interesting. While not exactly a great disc, it's still worth a look.

Sale Price 6.54
List Price 9.97
Buy Now
3rd Party 6.54
In Stock.
See what people are saying about this story or others
See Comments in Forum
Previous Next
Pre-Orders
Tomorrow's latest releases