Guardians of the Galaxy Vol. 2

Set to the all-new sonic backdrop of Awesome Mixtape #2, the film's storyline continues the team's adventures as they traverse the outer reaches of the cosmos. The Guardians (Chris Pratt as Peter Quill/Star-Lord, Zoe Saldana as Gamora, Dave Bautista as Drax, Vin Diesel as the voice of Groot, and Bradley Cooper as Rocket) must fight to keep their newfound family together as they unravel the mystery of Peter Quill's true parentage. Old foes become new allies and fan-favorite characters from the classic comics will come to our heroes' aid as the Marvel Cinematic Universe continues to expand.

If there is one thing James Gunn has demonstrated in the last few years of his two-decade filmmaking career, it's that when left to his own wildly-whimsical devices, he can catch lightning in a bottle. His first two theatrical features, Slither and Super, didn't leave much of an impression at the box-office, but both films are today well-regarded cult favorites, better appreciated for being clever insights at genre formula. In 2014, he amazingly managed to turn a relatively little-known and near-forgotten comic book series into a cultural phenomenon, surprising the expectations of everyone. Three years later, Gunn returned to write and helm Guardians of the Galaxy Vol. 2, pulling off another miracle by being significantly better than anticipated or as lead to believe by the previews. Although it doesn't surpass the first movie, which for some is debatable, the direct follow-up nonetheless proudly joins the list of superhero sequels that are just as good as their predecessors. Gunn and his talented team maintain the same level of energy and humor as before, centered around the camaraderie and chemistry of a ragtag band of reluctant heroes.

Of course, as tends to be the curse of most sequels, much of the plot in this second installment is largely a rehash of what worked in the first movie. Only, those same plot points have been reshuffled and rearranged in such a way as to be barely perceptible. After opening with another musical dance number, the gang is once again hunted through the galaxy for stealing a valuable artifact. Only this time, Rocket (Bradley Cooper) is the one pinching a handful of batteries from a gold-colored race known as the Sovereign, and the ploy is used for generating tensions between the crew, forcing them to learn to work together at the opportune time while pushing the theme of family. Meanwhile, the arrogantly smarmy Peter Quill (Chris Pratt) continues fancying Gamora (Zoe Saldana) from a distance, but she's too proud to be admired and busy reeling from family problems, namely her sister Nebula (Karen Gillan). Michael Rooker, too, returns as the blue-skinned buccaneer Yondu chasing after Quill while also acting suspiciously forgiving of Quill's betrayals, which leads to resentment from his merry band of Ravagers. 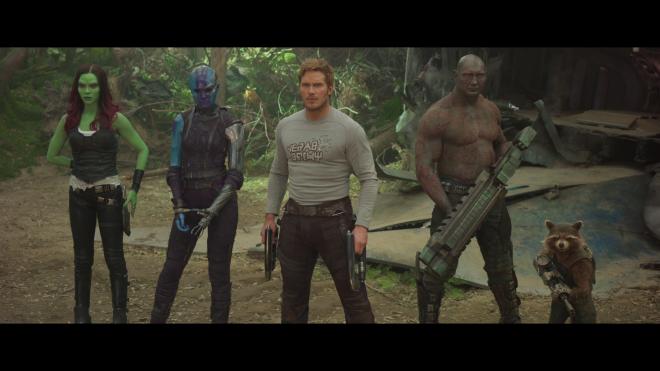 Again, the sequel is largely constructed from recycled parts of its predecessor, but thankfully, this is not to the film's hindrance. In fact, the real success of Gunn's plot, the smart thing for making a good sequel, is that he expanded on the events and themes of the first Guardians. The story feels more like a continuation rather than a haphazard add-on to a franchise. Drax (Dave Bautista) is finally grasping humor and sarcasm but still struggles with the concept that his straightforward, blunt honesty could be inappropriate, with some of the movie's funniest moments coming from his interactions with the empath Mantis (Pom Klementieff). At the same time, Yondu and Rocket are given more prominent roles, allowing them to reflect on their "a-hole" attitudes and providing the story an unexpected pathos. Part of this new emotional center also comes from Peter meeting his father Ego (Kurt Russell), the physical incarnation of an ancient celestial that evolved into a sentient planet. Gunn builds and builds all this gooey emotional stuff to the point of gushing over, hitting audiences right in the feels with what is frankly one of the most heartbreaking, tear-jerking sequences in all of the Marvel universe.

However, Gunn balances all this sentimentalism, making that tearful moment as though out of nowhere, with a great deal of humor and a few fanboy allusions. Other than seeing Howard the Duck (Seth Green) in another silly cameo, teasing fans with the idea of the character being given a film all to himself, Guardians of the Galaxy Vol. 2 is also populated by the likes of Sylvester Stallone as Stakar Ogord, one of the original members in the Guardians comics. His little spat with Yondu on Contraxia is a reference to the comics where Yondu first sported his "prototype" fin and was the leader of the Guardians. Later, other original members — Aleta (Michelle Yeoh), Charlie-27 (Ving Rhames), Mainframe (an uncredited Miley Cyrus), Krugarr and Martinex — also make brief appearances, hinting at the possibility of seeing more of them. There are plenty more Easter eggs throughout, but I'll leave the rest for viewers to hunt. In the end, the sequel is an excellent follow-up to the first movie, a lighthearted popcorn flick that lives up to the spirit of the summer blockbuster, one that is equally visually mesmerizing and exciting as it is fun and hilarious.

Walt Disney Studios Home Entertainment brings Guardians of the Galaxy Vol. 2 to Blu-ray as a two-disc combo pack with a code for a Disney Digital HD Copy, which can be redeemed via RedeemGuardians.com. The package also includes an amusing, retro-like poster featuring David Hasselhoff. The Region Free, BD50 disc sits comfortably on the panel opposite a DVD-9 copy with a lightly embossed, glossy slipcover. At startup, the disc commences with skippable trailers before switching to a menu screen with the standard options, music and full-motion clips.

The ragtag group of galaxy heroes returns to save the universe once again armed with a beautiful 1080p/AVC MPEG-4 encode that constantly shines and wows. Like its predecessor, one of the best aspects of the production is the vibrant cinematography of Henry Braham, and the Blu-ray perfectly and faithfully captures his brash, comic-book style. Lush, sumptuous primaries ooze off the screen with giddy delight, keeping everything light and animated, while Ego's planet parades about with an extensive array of loud, vivid secondary hues, making the sentient world appear like a beautiful phantasmagoric dream. Spot-on contrast provides a comfortably bright and glowing presentation with sparkling, brilliant whites throughout. Brightness levels are arguably the weakest area where blacks are not quite as rich and deep as they could be, looking a bit murky in some spots and somewhat dull during darker, poorly-lit sequences. Thankfully, shadow details remain unharmed, exposing the tiniest object and detail within the darkest shadows.

Presented in 2.40:1 aspect ratio, the HD video also crash lands with outstanding definition and resolution. Shot entirely on the Red Weapon Dragon camera system, the freshly-minted digital transfer displays sharp, fine lines in nearly every scene. The loose wires and exposed pipes of Quill's ship are plainly visible while the most negligible scratch and imperfection everywhere gives the ship some character. The lettering in buttons is distinct and legible, the thick threading in the costumes are unmistakable, and the elaborate architectural design of Ego's palace is easy to make out. For more observant viewers, the makeup work of Gamora, Drax and Nebula will reveal the most trifling and insignificant detail, adding to their realistic appearance, and the individual hairs of Rocket and the cracks in Groot's rough bark body are discrete and often striking. Facial complexions beneath the makeup appear natural with lifelike textures. Sadly, there are several moments that look softer than others, most of which is related to the CG imagery and Ego's planet, the latter of which may be deliberate. Nevertheless, the high-def presentation is awesome!

Accompanying the terrific video is an equally awesome DTS-HD MA 7.1 mix, sure to rock the house with several demo-worthy moments to impress friends. Two such moments that immediately stand out are the Guardians' escape from the Sovereign's drone fleet and the savagely brutal fight between Nebula and Gamora on Ego's planet. In each of these scenes, the surrounds really come alive as the small spaceships zoom in ever which direction and flawlessly pan from behind the room to the front. Of course, the sequence to beat these two is the climactic showdown between the Guardians, Ego and the Sovereign while at the sentient planet's core. Once again, ships fly all around and the blasts of gunfire are discretely employed throughout various speakers, fully immersing the listener into the thick of battle. Quieter scenes come with subtle ambient effects, generating and maintaining a terrifically satisfying 360° soundfield.

Imaging is also continuously active, exhibiting superb detailing and clarity in the midrange. The loudest and most rambunctious moments, of which there are several, sustain extraordinary precision and fidelity in the higher frequencies, keeping the action playful and highly engaging with effective off-screen activity. Tyler Bates's musical score, too, reveals superb distinction and separation in the orchestration as it's spread across the entire screen, creating a splendidly spacious soundstage. Amid all the rowdy merriment and comical chaos, the back and forth dialogue is very well-prioritized and consistently intelligible, never drowned out by the colorful mayhem. The action would greatly benefit from a more authoritative low-end, but that's a really small objection due to personal preference. Aside from that, the bass is quite robust and hearty, providing the film with presence and appreciable depth, making this a fantastic lossless mix.

In an unexpected move, Walt Disney Studios has opted to release Guardians of the Galaxy Vol. 2 as a bare-boned standard-def DVD, making all the special features exclusive to the Blu-ray and Ultra HD.

Miraculously, writer/director James Gunn catches lightning in a bottle for a second time with Guardians of the Galaxy Vol. 2, proudly joining the list of superhero sequels that are just as good as their predecessors. Although much of the plot feels recycled and repurposed from the first movie, Gunn and his talented team deliver an excellent follow-up, a lighthearted popcorn flick that lives up to the spirit of the summer blockbuster, as visually mesmerizing and exciting as it is hilarious and full of heart. The Blu-ray crash lands into home theaters with outstanding HD video and a reference-quality audio presentation. Although the supplements are sadly light and somewhat lackluster, the overall package is recommended for fans of the first movie and of the superhero subgenre in general.

Sale Price 17.99
List Price 26.5
Buy Now
3rd Party 5.99
In Stock.
See what people are saying about this story or others
See Comments in Forum
Previous Next
Pre-Orders
Tomorrow's latest releases