A rare glimpse into the mind of one of cinema’s most enigmatic visionaries, David Lynch: The Art Life offers an absorbing portrait of the artist, as well as an intimate encounter with the man himself. From the privacy of his home and painting studio in the Hollywood Hills, a candid Lynch conjures people and places from his past, from his boyhood in Idaho and Virginia to his experiences at art school in Boston and Philadelphia to the beginnings of his filmmaking career in Los Angeles—in stories that unfold like scenes from his movies. This remarkable documentary by directors Jon Nguyen, Rick Barnes, and Olivia Neergaard-Holm reveals the story behind Lynch’s early years as a painter and director drawn to the phantasmagoric, while also illuminating his enduring commitment to what he calls the “the art life”: “You drink coffee, you smoke cigarettes, and you paint, and that’s it.”

After spending a decade and a half off in the proverbial wilderness, cult filmmaker David Lynch returned to the public consciousness recently with the improbable resurrection of his famed TV series Twin Peaks, which has just wrapped up a very belated third season on the Showtime network. During the three to four years leading up to that, he also sat for a series of interviews in support of a new documentary that was released just prior to the show's broadcast. Fans hoping that it might shed some light on the mysteries of that series or of Lynch's filmmaking in general will likely walk away disappointed. David Lynch: The Art Life focuses almost exclusively on its subject's painting, sculpting and other artistic endeavors, with barely any mention at all of the movies he's actually famous for.

Over the course of his career, David Lynch has fallen in and out of favor with critics and the public a few times. His last peak occurred with a Best Director Oscar nomination garnered for his 2001 Mulholland Drive. Unfortunately, rather than capitalize on that success, he immediately retreated from filmmaking and devoted most of his time to a personal art commune, occasionally churning out (mostly terrible) video content for a subscription web site that eventually failed. The only feature film Lynch completed during that time was the disastrous Inland Empire in 2006, a work that all but his most ardent of apologists would consider best left forgotten.

In the midst of that period of artistic decline, the director allowed a video crew to follow him around for an insufferably pretentious and sycophantic documentary released to the web and DVD under the title Lynch, sometimes called Lynch (One), in which he traveled to Poland to photograph abandoned factories and promoted his affiliation with Transcendental Meditation. It can currently be found on YouTube, but honestly, it will make even loyal fans squirm uncomfortably. When I discovered that some of the same people responsible for that piece were also behind The Art Life, my expectations for it sank and I feared for the worst. 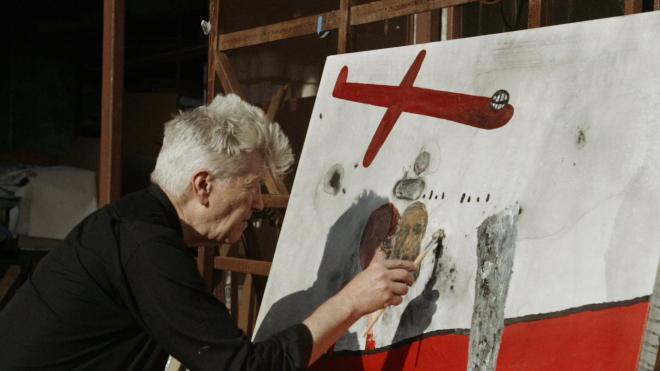 Fortunately, The Art Life is a decidedly better documentary. At the very least, it's structured in a more coherent manner and actually seems to have some point or purpose it's trying to get across. Simply stated, the message is that David Lynch is more than just the director of offbeat movies. He has always considered himself first and foremost an artist, and only ever got into filmmaking in the first place as a medium with which to give his artwork motion. He spends more time painting than he does filmmaking (especially in recent years) and would likely prefer that be his true legacy.

The documentary's greatest asset is that it provides a very good look at some of Lynch's artworks. We also see him at work creating them, sometimes with his very young daughter (the product of his fourth marriage) joining him in the studio for an infusion of cuteness. Interspersed with this, Lynch reminiscences about his youth, his time in art school, his first marriage, and the life-changing experience of his admission to the American Film Institute. The stories end right as Lynch's filmmaking career begins, with production of his first feature, Eraserhead.

Longtime fans will find many of these anecdotes familiar, and the documentary offers no particular revelations or insights into Lynch's work or what makes him tick as a human being or an artist. It's essentially a puff-piece hero worship profile. Even for as much as Lynch famously dislikes explaining or analyzing his movies, the film's almost total avoidance of mentioning them at all is a frustrating missed opportunity.

Fans will find David Lynch: The Art Life a pleasant enough viewing experience, but there's no meat to it. The documentary would best function as a bonus feature to one of Lynch's own films. Unfortunately, it does not deserve enshrinement into the Criterion Collection on its own.

The Criterion Collection has been on pretty good terms with David Lynch over the past few years, having released his Eraserhead and Mulholland Drive on Blu-ray already, with Twin Peaks: Fire Walk With Me coming soon. In that respect, one can certainly understand the label's interest in releasing this David Lynch: The Art Life documentary as well. The film arrives as spine #895, packaged in one of Criterion's clear keepcases.

A fold-out booklet contains an essay by author Dennis Lim, annoyingly printed with selected words in a clashing mix of fonts. That's obviously supposed to emulate the use of text in Lynch's paintings, but the effect just makes the essay difficult to read.

The disc has a simple menu. Unlike the Blu-rays for Lynch's own feature films, this one is authored with both chapter stops and a Scenes Selection menu. That no doubt infuriates the man if he's aware of it.

The main interview footage in David Lynch: The Art Life, as well as images of the artwork, were shot primarily with a Canon EOS 5D camera. Other scenes were captured on an iPhone, and home movies from 8mm sources are woven in throughout. In some instances, footage was intentionally degraded to look older than it really is for stylistic effect.

As a documentary, variances in picture quality are expected and tolerated. The important takeaway is that the bulk of the movie looks terrific when it's supposed to. The full-screen 16:9 image is very sharp and clear with vibrant colors and good contrast. Some of Lynch's paintings have an almost tactile texture on screen, as if you could reach out and touch them. I noted no issues with the 1080p/AVC MPEG-4 encoding, such as unwanted noise or digital artifacts. 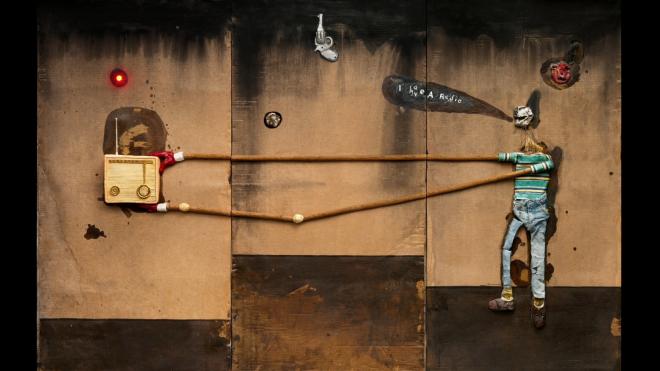 For a documentary, The Art Life has a playful 5.1 audio mix reminiscent of Lynch's own movies. The musical score is very evocative and bassy. Lynchian sound effects and ambient tones are employed regularly. (Unlike Lynch's movies, the surround channels are even put to some occasional use.) Those are mostly affectations, of course, and the film never gets too aggressive or dynamic. Crucially, all the dialogue is clear and intelligible. 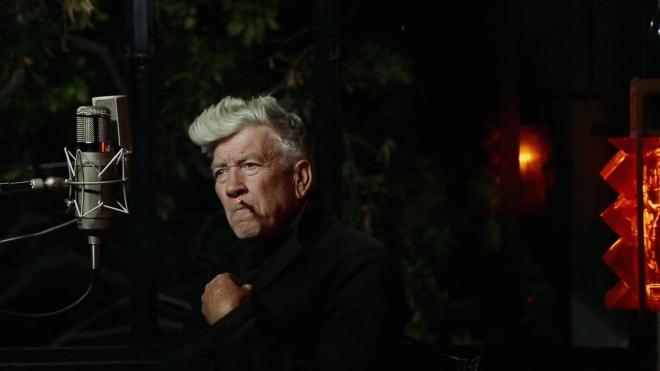 Given that The Art Life is little more than a Blu-ray supplement itself, the lack of bonus features supporting it should come as little surprise.

David Lynch: The Art Life provides a good look at some of the eccentric filmmaker's extracurricular activities, and fans may find some enjoyment in watching it. However, the film offers no particular insight into either the man or his art, and almost entirely bypasses any mention of his movies. It's ultimately far too insubstantial to justify its induction into the Criterion Collection.

Sale Price 22.78
List Price 29.95
Buy Now
3rd Party 15.99
In Stock.
See what people are saying about this story or others
See Comments in Forum
Previous Next
Pre-Orders
Tomorrow's latest releases