In the town of Twin Peaks, everyone has their secrets—but especially Laura Palmer (Sheryl Lee). In this prequel to his groundbreaking 1990s television series, David Lynch resurrects the teenager found wrapped in plastic at the beginning of the show, following her through the last week of her life and teasing out the enigmas that surround her murder. Homecoming queen by day and drug-addicted thrill seeker by night, Laura leads a double life that pulls her deeper and deeper into horror as she pieces together the identity of the assailant who has been terrorizing her for years. Nightmarish in its vision of an innocent torn apart by unfathomable forces, Twin Peaks: Fire Walk with Me is nevertheless one of Lynch’s most humane films, aching with compassion for its tortured heroine—a character as enthralling in life as she was in death.

For 25 years, fans of David Lynch's cult TV series Twin Peaks assumed that its feature film prequel, Twin Peaks: Fire Walk With Me, was the end of the road for Agent Cooper, Laura Palmer, and other beloved characters. During its release in 1992, the movie was a box office bomb, was excoriated by critics who didn't understand anything about it, and even proved divisive among the show's loyal watchers. Although it eventually grew in appreciation over time, the film was judged a disastrous failure initially, causing Lynch to cancel any plans to further explore the property. This was especially frustrating given that the movie provided no closure for the cliffhanger that ended the TV show or other dangling narrative threads.

Lynch was so heartbroken by the way both the TV series and the movie were treated that it took him two-and-a-half decades to come back to Twin Peaks. That finally happened in 2017, with the release of a very belated third season (called Twin Peaks: The Return during broadcast, recently rebranded as Twin Peaks: A Limited Event Series for home video) on the Showtime cable network. Among other tie-ins, the revival series prompted Fire Walk With Me to be inducted into the Criterion Collection and reissued on Blu-ray.

Not counting foreign editions, this is the second (technically third, I suppose) appearance for Fire Walk With Me on Blu-ray in North America. The first was included with the impressive ten-disc Twin Peaks: The Entire Mystery box set released by CBS Films and Paramount in 2014. That set was later shorn of a couple supplement discs and reissued in 2016 as the awkwardly-titled Twin Peaks: The Original Series, Fire Walk With Me & The Missing Pieces collection. For whatever it's worth, the Criterion release marks the first time Fire Walk With Me is available on Blu-ray in this region on its own, without the TV series.

In addition to some brief thoughts on it when I reviewed The Entire Mystery, I have also previously reviewed foreign Blu-ray copies of Fire Walk With Me. For a full, mostly spoiler-safe review of the movie, I'll direct readers to my coverage of the Japanese import edition.

Considering that the copy of Twin Peaks: Fire Walk With Me contained in the Entire Mystery box set from 2014 was already remastered from a new 4k scan of the film elements supervised by David Lynch, and provided over 90 minutes of deleted and extended scenes that fans had clamored to see for decades, a question arises of what Criterion's standalone edition of the movie could really offer to set itself apart, other than the prestige of the Criterion branding? In many respects, this new disc is largely redundant to the old one, which I have to assume most fans already own when they bought the TV show. (While a certain fragment of Twin Peaks fans love the series but don't care for the movie, I don't know of many who like the movie without also liking the series.)

The Criterion release comes packaged in a fold-out digipak within a cardboard slipcover. The outer artwork is a variation on the movie's traditional poster art. That's a little disappointing from the perspective of over-familiarity with that image, but looks better than some of the alternatives that might have been used instead. The interior design shows a strong knowledge of and appreciation for the movie. Stored inside the digipak is a booklet containing a lengthy excerpt from Chris Rodley's 1997 interview book Lynch on Lynch.

The disc menus are simple and appropriate. Per David Lynch's eccentric (and frustrating) wishes, the Blu-ray has no Scenes Selections menu or even chapter stops. Lynch insists that viewers must watch his films in full from start to finish every time, and loathes the idea of allowing anyone to skip ahead to a specific scene out of sequence. 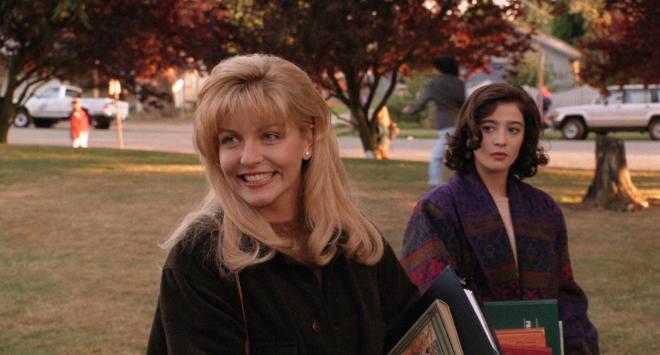 Because David Lynch already approved a 4k remaster of Fire Walk With Me for the 2014 Blu-ray, Criterion licensed that master and has apparently not touched a pixel of it. The 1080p/AVC MPEG-4 encode on this disc looks frame-for-frame identical to the prior copy. For the most part, that's a good thing. The image is perhaps a little soft at times, but has pretty good detail (witness that you can tell the blue rose pinned to Lil's dress is artificial) and preservation of grain structure. Colors and contrast look very nice.

I've long wondered why David Lynch chose to shoot this movie in the 1.85:1 aspect ratio, rather than 2.35:1 widescreen like the majority of his other films. I suppose that he wanted to maintain some consistency with the look of the television series, yet he takes great pains to distance himself from television in so many other respects. This feels like a missed opportunity, but at least the composition that he chose is presented properly. Back in the day, the American Laserdisc release of the film was misframed and erroneously cropped off character heads in some shots during the final act.

Like all previous home video releases, Agent Desmond's disappearance in this edition of the film concludes with a fade-to-black. The original U.S. theatrical prints ended this scene with a fade-to-white, but Lynch apparently rethought that edit after the fact. The reason for this change is one of the film's many mysteries. 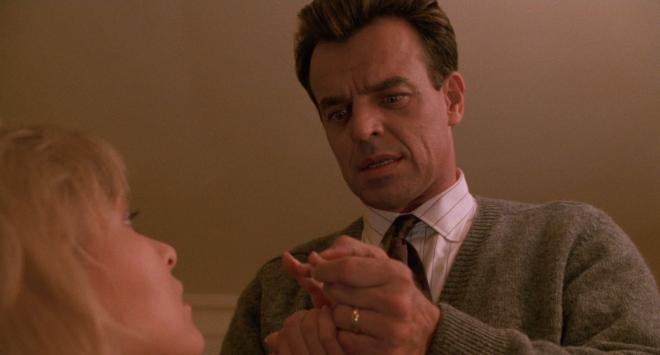 The Criterion disc carries over the DTS-HD Master Audio 7.1 remix that David Lynch created in 2014. The Paramount/CBS Blu-ray had a small amount of sync error between the audio and the visuals. I didn't find it bad enough to be distracting, but other viewers were more bothered by it. That has been corrected here.

Despite the 7.1 configuration, Lynch has had an aversion to surround sound for a long time. Some of his movies (such as Mulholland Drive) barely use the surround channels at all. The track for Fire Walk With Me surprisingly allows a fair amount of music to come from the left and right Surround speakers, but only occasional sound effects. The Back Surrounds, meanwhile, are suppressed so low in volume that I didn't notice any activity in them until I left my seat and put my ear right up to a speaker, which leaves me questioning the point of doing a 7.1 mix at all.

During the movie's theatrical release in 1992, Lynch sent a note along with the film prints instructing projectionists to turn up the volume gain above normal. It was his intention that this soundtrack be played loud. The "Partyland" nightclub sequence has blaring, deafening music that deliberately drowns out the dialogue. Unlike early DVD editions of the film which boosted the dialogue track in that scene to make it more intelligible, the Blu-ray restores the original dynamic. The dialogue is obscured and subtitled.

For all its loudness, the track's bass never hits especially deep or hard, but it's sufficient to deliver some rich musical notes and growling motorcycle engines. On the other hand, the audio gets a little muddy whenever there's a lot going on in a scene, and I noticed what sounds like some distortion at high volumes.

Exclusive to the Criterion Blu-ray is an alternate DTS-HD Master Audio 2.0 Surround track that the booklet liner notes claim was mastered from the 35mm magnetic printmaster. It has a slight hiss, and in comparing a few scenes, I found the 7.1 option to have better clarity of small details during quiet scenes. For example, during Laura's conversation with Donna around the 41:00 mark, a subtle crackle from the fireplace is much clearer on the 7.1 track and hardly audible at all in the 2.0 option.

Weirdly, I found at least one scene where the 2.0 track seems to be missing pieces of the musical score. (Or, possibly, extra music was added for the 7.1 mix.) When Agent Desmond confronts the Deer Meadow deputy at 9:25, the 7.1 track has decidedly more musical underscore that's either not present at all on the 2.0 track or so low in volume to be inaudible. Unfortunately, I no longer have any old DVD editions of the movie to compare with, and my Laserdisc player is not currently in service. 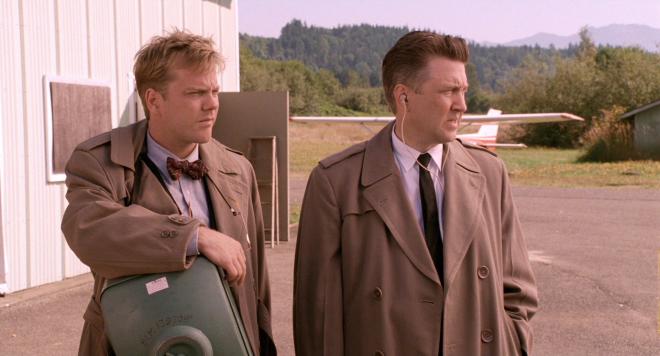 Criterion has licensed a couple of key features from the Paramount/CBS Blu-ray, as well as creating a small amount of new content. Any fan of the filmmaker knows that David Lynch refuses to discuss the meaning behind anything in his movies, so don't go looking for insight or analysis in that respect. 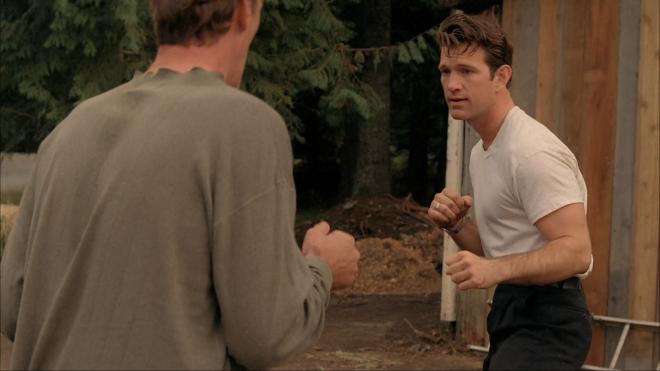 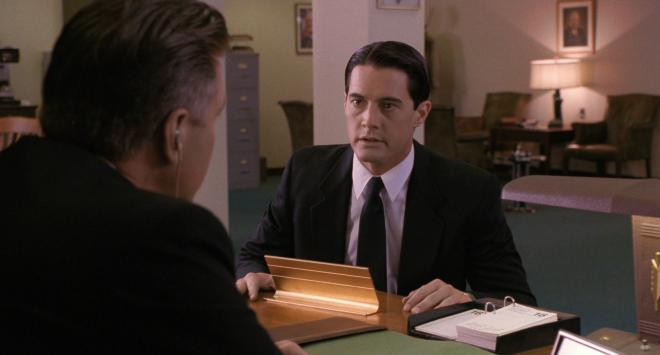 All of the bonus features on the Criterion Blu-ray are shared with a comparable DVD edition. None are exclusive to the high-def format.

Among its many other extras mainly pertaining to the TV series, the Entire Mystery Blu-ray had a half-hour featurette called "Reflections on the Phenomenon of Twin Peaks" that was created for the Fire Walk With Me DVD in 2002. Frankly, it was rather pretentious and annoying.

The prior Blu-ray also had a better half-hour retrospective called "Moving Through Time: Fire Walk With Me Memories," and a photo gallery that Criterion has not carried over. 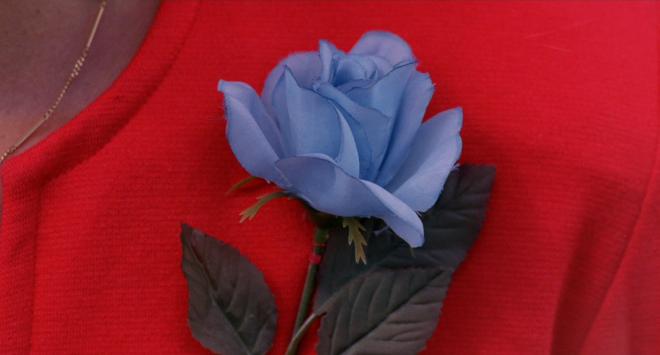 Judged entirely on its own, the Criterion edition of David Lynch's Twin Peaks: Fire Walk With Me is a solid enough release. It has a good video transfer and over 90 minutes of deleted scenes. Unfortunately, so did the Paramount/CBS Films Blu-ray from 2014 that was included in the box set with the entire original TV series. I have to imagine that most fans already own that disc, and this one doesn't offer anything new other than a couple of (interesting but insubstantial) interviews and an alternate 2.0 audio track. Is that worth a double-dip?

As a film, Fire Walk With Me is tied so closely to the TV show that it cannot be rated as a standalone work. A viewer who hasn't seen the series will not be able to make sense of much in the movie. Other than the Criterion branding, I'm not sure that I see much point in re-releasing the film separately when every existing Blu-ray copy of the TV series comes with a disc that's about 90% identical to this one.

I suspect that this disc exists largely as an excuse to further the label's working relationship with the director. To that end, if it helps us to get good remasters of Lost Highway or The Straight Story into the Criterion Collection at some point in the future, I'm all for it. However, I don't consider it a necessity for anyone who owns the earlier Blu-ray.

Sale Price 20.98
List Price 39.95
Buy Now
3rd Party 19.99
In Stock.
See what people are saying about this story or others
See Comments in Forum
Previous Next
Pre-Orders
Tomorrow's latest releases