Overview - The incomparable Toshiro Mifune stars in Akira Kurosawa’s visually stunning and darkly comic Yojimbo. To rid a terror-stricken village of corruption, wily masterless samurai Sanjuro turns a range war between two evil clans to his own advantage. Remade twice, by Sergio Leone (A Fistful of Dollars) and Walter Hill (Last Man Standing), this exhilarating genre-twister remains one of the most influential and entertaining films ever produced. Criterion is proud to present this Kurosawa favorite in a new, high-definition digital transfer.
OVERALL
Recommended

Free Agent (noun) - 1. A man who is not responsible for his actions and/or beliefs, and answers to no man. 2. An athlete who has reached the end of his existing contract, and is free to sell his talents and presence to anyone he pleases. 3. Sanjuro (Toshirô Mifune), the leading man in 'Yojimbo,' as written and directed by the legendary Akira Kurosawa.

The now-classic story has been told numerous times, with light changes, mostly modernizations and relocations. Perhaps you've heard of a few of them: 'Lucky Number Slevin,' 'Sukiyaki Western Django,' 'Django' of the non-Sukiyaki variety, 'A Fistful of Dollars,' and 'Last Man Standing' may be some of the more recognizable and/or famous revisions to this samurai tale. The character went on to appear in a sequel (of sorts), named after the character, with the same actor and director, and even, in a sense that can be debated, met up with Zatoichi in one of his adventures, and partially inspired a comic/cartoon character who, at times, starred alongside the Teenage Mutant Ninja Turtles in Usagi Yojimbo, the hare samurai. The two-timing (two bit, as he's called) samurai is possibly the ultimate protagonist.

A wandering Ronin stumbles into a town polarized and plagued by gang warfare, as the factions led by Seibei Manome and Ushitora Shinden have all but ruined the area. The only guy in town making money? The casket maker. Upon learning the lay of the land from the old restaurant owner, the as-of-yet-to-be-named hero realizes his place in this microcosm near immediately. After showing off his skills by slicing through three pieces of criminal riffraff, he begins to play both sides of the conflict, offering his services to the highest bidder, and, discretely, playing the two against each other, in an attempt to eliminate both factions. He says his name is Sanjuro Kuwabatake, and his role in the area will be clear in the long run, even if it muddles all those around him in the immediate.

'Yojimbo' is a superb piece of samurai cinema, in the age just before firearms proliferated the country and changed the entire continent and its style of warfare. One man in this story, named Unosuke (the under-appreciated Tatsuya Nakadai), has a gun and he's more than happy to remind all those around him that he's the only man around with such power. He is the only real threat to Sanjuro's plan, as the others are all too stupid or wrapped up in their own greed and anger to see the truth that they're just pawns, or puppets played to fight one another, due to the puppeteer's sick sense of amusement. His weapon's talents are feared and respected at once, but his heart, being in the wrong place, and his hubris, will be his downfall.

Unosuke is interesting because, as the key villain, due to his power, he isn't the primary player. He's introduced at the midpoint, as a traveling man, who only has learned how to use his weapon in his journey's, rather than learn from the diverse characters and beliefs he must have encountered. If his clan had only listened to him from the get-go, Sanjuro's plot would not have worked, though, so despite his lack of worldliness, he is far from a fool...save for his confidence, and greed for power.

Sanjuro is a superb philosopher samurai, experienced, yet not too old, and unlikely to ever take on a true apprentice. Cool and confident like Steve McQueen, with the same thirst for true living, which may cause his downfall. An anti-hero to the core, his intelligence and patience beguile his age. His skills with a blade match his intellect, as he can outmaneuver a small gang all by his lonesome. Sanjuro doesn't give us much to look at to tell of his past, but his actions speak so loudly that one cannot help but imagine his origin and training. He's much like an angel, as he arrives with a purpose for bettering the area, though his true intentions are clouded. While he works both sides of the street for more money, he doesn't invest or use it, rather he gives it to those who need it, despite the fact they are not worthy of his help.

Kurosawa is viewed as one of the all-time greats for a reason, and his talents are on full display here, alongside his longtime collaborator Mifune. Nowadays, I can hardly imagine Leondardo DiCaprio's career without Martin Scorcese, and their connection, while extremely fruitful, has nothing on these two Japanese legends. The pacing of the story is ideal, drawing the viewer into the tale without ever divulging too much information. If anything, things are kept on a need-to-know basis throughout. We are constantly enraptured by the actions and treachery, basic mischief that Sanjuro is up to, and watching his chess game unfold. The framing of the shots, and the scenery, both lend to the visual aesthetic, as Kurosawa crafts a tight yarn that has great diversity in stylization.

My first exposure to the character was in 'Sanjuro,' and due to such, my heart somewhat belongs to the second outing. But 'Yojimbo' is far from lacking, and is certainly a powerful film. This just may be one of those cases where a sequel (of sorts) isn't just a cheap rip off or bastardization, a continuation, of sorts, in all things Sanjuro. 'Yojimbo' may be 50 years old in 2011, but damn if it isn't timeless, due to how much the story has been borrowed over the years, and due to the superb acting, writing, and direction. Not once have any of the knock offs come this close to cinematic perfection. Sanjuro the character is perfectly depicted as he climbs into the watch tower, after betraying one of his two potential employers, inducing carnage, but preferring to witness the outcome rather than be a part of it. Few scenes are ever as epitomizing as this one brief shot, as rival clans inch closer to battle with Sanjuro watching directly in the middle, from above.

'Yojimbo' arrives on Blu-ray in a standard Criterion clear fat case, with the same spine number (52) as both of the previous DVD releases. The cover art is an exact copy of the second release of the film from the studio. The disc itself is Region A locked, on a BD50 Dual Layer Disc. Also included is a booklet with an essay from Alexander Sesonske and random comments from Kurosawa and crew. The menu is static, with a light flicker and fade of lighting, with no sound. 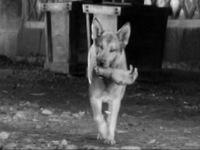 "I know I'm quite a sight, but could you do your staring later?"

This black and white classic is as eye catching as 'The Third Man' before it. Maybe even more so. The rich blacks and sharp whites mesh beautifully, with sharp contrast, and utterly superb shadow detail. Clarity levels are nearly through the roof, with only a handful of soft shots (mostly at a distance or in an extreme filming condition) to ground the viewer in reality. There are still a few bits of dirt and/or debris that are apparent, despite the Criterion signature clean-up process, with a few looking like they've been painted over, like trying to cover up a pimple with a big red post-it note. Grey hairs leap right out of topknots, while loose hairs find themselves jumping out of the more restrained 'do's fantastically. Grain levels stay constant, just like the picture, not jumping all over the place (like the stray hairs do!). There is a very minimal bit of bleeding, and a soft flicker (which isn't much of a distraction, but is noticeable), but all in all, this has to be one of Criterion's best looking releases to date. Perfect? No. But damn, damn close. 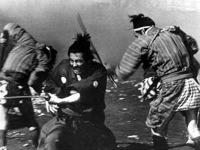 The audio for 'Yojimbo' is presented in two options: a Linear PCM Mono mix, or a DTS-HD Master Audio 3.0 mix. The 3.0 track has great clarity in the score, without a single pop or hiss to be heard. The score can get intense when it wants, and whimsical at its leisure, too, and displays great sonic variety in that sense, with appropriate highs and lows. Dialogue is crisp, with only a few voices and moments sporting an underlying feedback quality (mostly in the more pronounced, powerful lines), but bellows can be hard to hear through the score at times. Prioritization just doesn't seem like it was ever stressed. 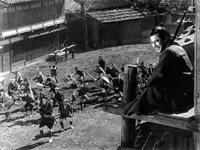 The supplement package for this Criterion release matches the most recent re-release on DVD. 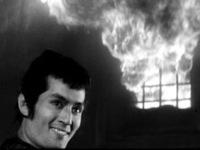 'Yojimbo' isn't Kurosawa's greatest film. In fact, one can even question if it's the best film Kurosawa made starring the Sanjuro character. But it is great cinema, regardless. Mifune is a powerful presence, while Nakadai is enjoyable as the representation of foolish modern values and lifestyles. This Blu-ray sports great video, good audio, and superb, though far too few, extras. This one comes with great recommendations, though buying the two-pack is certainly the way to go, price-wise.

Sale Price 25.17
Buy Now
3rd Party 25.17
In Stock.
See what people are saying about this story or others
See Comments in Forum
Previous Next
Pre-Orders
Tomorrow's latest releases