Make way for the ultimate homage to one of the most enduring legends of the big screen—Godzilla! The King of the Monsters is back in Tokyo for a city-crushing crusade that speaks to the very roots of the world-renowned franchise.

It's a peaceful day in Japan when a strange fountain of water erupts in the bay, causing panic to spread among government officials. At first, they suspect only volcanic activity, but one young executive dares to wonder if it may be something different… something alive. His worst nightmare comes to life when a massive, gilled monster emerges from the deep and begins tearing through the city, leaving nothing but destruction in its wake. As the government scrambles to save the citizens, a rag-tag team of volunteers cuts through a web of red tape to uncover the monster's weakness and its mysterious ties to a foreign superpower. But time is not on their side—the greatest catastrophe to ever befall the world is about to evolve right before their very eyes.

It seems as though Japanese filmmakers and Toho Studios dig up Godzilla from its watery grave every few years as a response to something larger occurring in the world, exploring certain cultural themes and events centered around the story of a gargantuan monster wreaking havoc upon the country. Of course, we would have to discount a large selection of movies where the legendary creature simply battles another equally powerful titan. They're mostly just for fun. I'm referring to those which are notably inspired by larger issues, both abroad and at home, such The Return of Godzilla (aka, Godzilla 1985). The last time the giant lizard made a major splash on the big screen was in Godzilla 2000: Millennium, which was a direct response to Roland Emmerich's terrible iguana makeover. At first, the newest movie, Shin Godzilla (aka, Godzilla Resurgence) could also be viewed as another response to a mildly disliked and poorly-received American version — this time a reaction to Gareth Edwards' 2014 pseudo-sequel re-imagining. But in fact, this modern take on the classic monster is a different beast of its own in response to something far more important.

One of the more fascinating aspects of this production -- written and directed by Hideaki Anno, better known for his work in the Neon Genesis Evangelion series -- is the lack of one central protagonist. The argument could be made that Deputy Chief Cabinet Secretary Rando Yaguchi (Hiroki Hasegawa) plays that essential role. After all, a good portion of the plot's pacing comes from his inquiries, investigations, forming a response committee and his connections with Special Envoy to the U.S. Kayoko Ann Patterson (Satomi Ishihara doing her best fluent American English while also being the stereotypically indifferent career politician). And while all this may be true, much of the story is actually told from various perspectives, including a few private undisclosed conversations between Patterson and some faceless black suit. Scenes of the creature destroying Tokyo Bay and Kamakura while en route to Tokyo come from viral videos and news footage. Meanwhile, Prime Minister Seiji Okochi (Ren Ôsugi), Chief Aide Hideki Akasaka (Yutaka Takenouchi), the military and various other heads of state scramble to determine the best course of action. 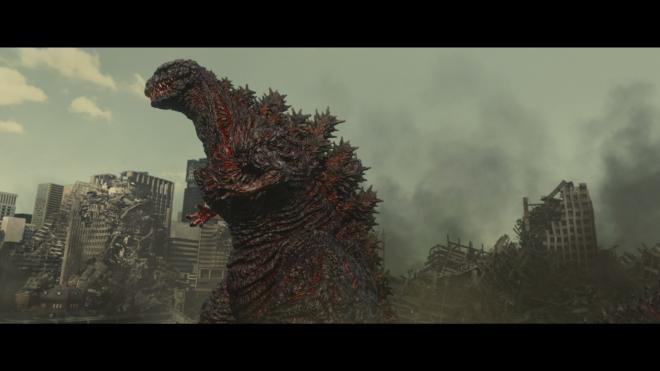 And before anyone jumps on this lack of a more traditional principal perspective, seeing events from multiple points of view with none coming out the central hero is actually the point, making this creature-feature all the more fascinating and unique from its subgenre brethren. Rather than feeding fans the typical monster fodder where humans overcome a catastrophic adversary with a barrage of military force and explosions, Anno guides us behind the scenes of government officials trying to grasp the magnitude of a major tragedy that has the potential of spiraling into a national meltdown. It's a strange adventure thriller about the bureaucracy and the sometimes ridiculous red tape people must perform before finally committing to the proper course of action, revealing vulnerable and fallible humans largely inept and ill-prepared for unexpected disasters. Certain imagery immediately recalls recent events such as the 2011 earthquake and tsunami that resulted in the deaths of nearly 16,000 people. There are also many parallels with the government's reaction to the Fukushima Daiichi nuclear disaster and the danger of radiation fallout due to the incident.

On the surface, the thought of sitting through two hours of meetings bickering over the best course of action against a national threat, civil disputes about responsibilities and what the law allows, and scientists disputing the biology of the monster sounds incredibly dull. Not another Phantom Menace! Thankfully, Shin Godzilla is nowhere nearly as bad and is actually highly entertaining. It's to the credit of Anno and his team that this new take of a classic genre icon is as good as it is. Even as government officials quarrel and some of the smartest people in the nation struggle to understand, there is a continuous sense of urgency in the back and forth, a desperation to save the lives of as people as possible, which is often followed by moments of grief and remorse when they fail. There is also a general underlying feeling of disapproval towards how the system is created, one which binds the government and the Self-Defense Forces from doing what is immediately necessary because their actions are always under the watchful eyes of more powerful nations. It's ultimately a terrific twist and reimagining to a familiar formula and a dearly-beloved classic monster.

FUNimation Films brings Shin Godzilla to Blu-ray as a two-disc combo pack with a flyer for an UltraViolet Digital Copy. The Region Free, BD50 disc is housed inside a black eco-vortex case with a DVD-9 on the opposing panel and a glossy, slightly-embossed slipcover. At startup, viewers are directly taken to the standard menu screen with options in the bottom left corner, music and full-motion clips.

The King of the Monsters invades Blu-ray and wreaks havoc with an excellent 1080p/AVC MPEG-4 encode.

Shot on a variety of digital cameras with resolutions ranging between 3K and 5K but mastered in a 2K DI, the video is squeaky-clean overall with sharp, plainly-defined lines in every scene. The cinematography is highly stylized, mostly shot in what looks like soft diffusion filters giving the film an interesting hazy appearance, but the picture remains detailed and revealing nonetheless. The lettering on signs, bottles and random pieces of paper are continuously legible, objects in the far background are distinct and facial complexions appear natural with healthy, lifelike complexions. Contrast is slightly affected by the stylized photography, looking somewhat restrained to give the picture a more dour and serious appeal, but whites remain crisp and comfortable bright without ruining the finer details. Colors, too, are noticeably subdued and controlled, showing a more monochromatic palette that adds a gloomy atmosphere to the plot. However, primaries are still accurately rendered and pretty vivid in several sequences. Thankfully, brightness levels are not ruined by the intentional look, displaying excellent blacks that are true and good shadow delineation.

In a more surprising twist, the kaiju film's sound design was recorded in the highly unusual 3.1 configuration, which is then retained for its Blu-ray debut in a Dolby TrueHD codec. And owners have the choice between the original Japanese soundtrack and an English dub, which sound pretty identical aside from the change in language. Essentially, it's like listening to a typical stereo track, except that each channel is discretely employed throughout the entire runtime. Various sound effects move and travel across the front channels effortlessly and with satisfyingly convincing directionality. During the few action sequences, the mid-range appears extensive with outstanding clarity and fidelity in the higher frequencies, generating a good sense of presence and warmth. However, such scenes are far and few in between with a majority of the film's pacing been driven by the back and forth conversations, and vocals come through with superb distinction. There is a bit of low bass here and there worth appreciation, but it's sadly nothing particularly noteworthy.

Unfortunately, the English subtitles are not CIH-friendly as text appears in both the top and bottom of the black mattes, so some adjustments will have to be made for scope enthusiasts to properly enjoy the movie or simply watch in the standard 16:9 widescreen.

Godzilla vs. the Nerds (HD, 33 min): A roundtable discussion with comic book artist Matt Franka and others from the FUNimation company where they share their thoughts and insights of this production.

On the surface, Shin Godzilla is yet another rehash of a classic monster where writer-director Hideaki Anno refocuses our attention to what happens behinds closed government doors, at the constant bureaucracy and red tape that often takes place in light of a major disaster. The result is a surprisingly entertaining fantasy drama with the occasional spectacle of the iconic Toho creature. The Blu-ray arrives with an excellent picture quality and a satisfying enough Dolby TrueHD soundtrack that was recorded in the rather unusual 3.1 configuration. Sadly, with only one half-hour extra to further please owners, the overall package is ultimately for the most hardened, loyal fans while everyone else will want to give it a rent before purchasing.