Get ready to crumble! The king of all monsters is back and bigger than ever! The action heats up when a UFO reveals itself as a massive alien monster with awesome destructive powers. The alien monster heads straight for the behemoth GODZILLA(r) who's just crushed the entire city for the battle of theillennium. But GODZILLA(r)'s furious heat beam may not be enough to destroy the death-dealing alien, and the future of humankind is in jeopardy. Now, it's a bang-up, threeway, no-holds-barred brawl as GODZILLA(r), the alien monster and the courageous citizens of Japan fight an unprecedented battle for survival in this earth-shattering new sci-fi action adventure that will blow you away.

For the Toho production company, best known to U.S. moviegoers for distributing the films of Akira Kurosawa, creators of the kaiju genre and producers of several tokusatsu features, 'Godzilla 2000' worked on two fronts. First, it was intended as a modernized reboot of the company's arguably most famous franchise, a gargantuan reptilian monster with a terrifying roar, serrated fins along its spine and the ability to breathe atomic fire from its mouth. The Hensei era of Godzilla movies was finally coming to a close after 'Rebirth of Mothra 3' and 'Gamera 3,' so there was a desire to update the series for the upcoming millennium. Second, and the part I tend to like best about the movie, this is Toho's response to Roland Emmerich's 1998 Hollywood-ized bastardization of the iconic monster, which funnily marks the end of the Hensei period. Essentially, it effectively demonstrates how to properly make a giant monster flick.

Of course, the film from director Takao Okawara ('Godzilla vs. Mothra') doesn't rank as one of the better entries in the franchise, but it's decidedly superior to Emmerich's critical flop and is honestly a great start to what has fittingly become known as the Millennium series. There are times when the story takes itself a tad too serious, particularly when it comes to the alien aircraft and the introduction of new monster Orga. Reluctant news reporter and photographer Yuki (Naomi Nishida), Godzilla enthusiast and scientist Yuji (Takehiro Murata) and his plucky, clever daughter Io (Mayu Suzuki) are designed as the obligatory comic relief, but nothing the trio ever does is remotely close to funny. Io is a cutesy and quirky but also seems to be a distraction while attempting to serve as the story's heart. Meanwhile, Yuki's reluctance grows irritating, and we're never quite sure what to make of a seemingly forced romantic element with Yuji. 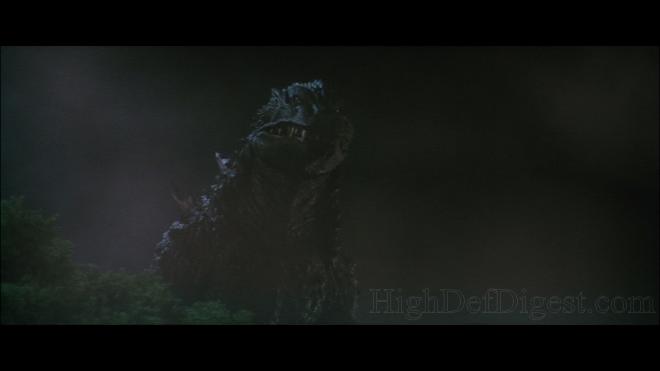 Then again, that triangle of characters is really a negligible concern that thankfully is kept on the sidelines for most the runtime. The main attraction is undoubtedly the return of the "King of Monsters," which Okawara does a marvelous job in creating anticipation and suspense, finishing with a spectacular battle against an imaginative, admittedly creepy-looking monster. The plot, written by Wataru Mimura and Hiroshi Kashiwabara, ignores the events of previous installments yet participates within the same universe where Godzilla is known to exist and perceived as some sort of natural force. Yuji is founder of the Godzilla Prediction Network, which only has two members, and believes the giant creature should be studied. On the flipside, the militarized Crisis Control Intelligence group run by former colleagues Mitsuo (Hiroshi Abe) and Miyasaka (Shiro Sano) want Godzilla permanently destroyed, going so far as designing weapons specifically for that intention and caring little about collateral damage.

This little back and forth is ultimately what drives 'Godzilla 2000' and makes it such a fun watch, complicated by the discovery of Godzilla's special regenerative abilities and an alien species that wants to colonize Earth. And of course, the final catastrophic battle at the end if undoubtedly the film's high-point, especially when Orga suspiciously looks very much like Emmerich's bipedal iguana-like creature and at which point Godzilla finally destroys it. When Toho released an English-dubbed version in the U.S. through Tristar Pictures, it was recut from the original 107-minute runtime down to 99 minutes, eight minutes of extraneous dialogue removed for creating a faster pace. Most notably, the American cut comes with a slightly comedic feel as oppose to the original's more serious tone. Nonetheless, for fans like myself, watching Godzilla on the big screen and hearing Akira Ifukube's iconic theme was all that really mattered. It was an added bonus that it turned out better than 1998's massive disappointment.

Sony Pictures Home Entertainment brings 'Godzilla 2000' to Blu-ray as part of the distributor's "The Toho Godzilla Collection." Both versions of the film arrive on the same Region A locked, BD50 disc housed inside a blue, eco-elite case with a flyer for an UltraViolet Digital Copy. At startup, viewers are taken directly to a static menu screen where viewers can choose between the two versions when selecting "Play Movie." The eight-minute difference between them is negligible bits of dialogue, making the U.S. cut slightly more action-oriented.

Both versions of the film arrive with similar results on Blu-ray, a mostly average looking 1080p/AVC MPEG-4 encode that's both acceptable but also somewhat disappointing. However, Sony provides two separate encodes that actually show some notable differences between them, starting with the original Japanese version presented in the original 2.35:1 aspect ratio while the American cut comes in 2.40:1 frame. Also, the former displays a slightly brighter palette that favors reds, but the latter is darker and the palette is interestingly of the teal-orange variety.

On the whole, the image of both is on the soft, sometimes noticeably blurry, with several poorly-resolved sequences which distract from the presentation's stronger moments. Details are nonetheless resolute and nicely defined with good visible textures on clothing, the monster suits and facial complexions. Contrast is sadly mediocre but stable while black levels waver between murky and accurate with passable delineation in the shadows. Colors appear somewhat faded and a bit dull, but primaries can be pretty bold in several spots. The digital composites and CGI unfortunately also hurt the picture quality, but of course, that's part of the original photography and source, not a fault of the high-def transfer.

Where the two versions differ prominently is in the audio department, with the shorter American edit coming out the winner. Presented in a DTS-HD Master Audio 5.1 soundtrack, the English dubbing is, of course, a bit corny and largely melodramatic, but vocals are nonetheless precise and well-prioritized. Imaging is wide and welcoming with excellent channel separation and a distinct, detailed mid-range. A robust but somewhat exaggerated low-end provides heft and weight to the action, explosions and Godzilla's every footstep. Rear activity delivers plenty of discrete effects with good panning and directionality, but it's the musical score that impresses with bleeds that create a satisfying soundfield.

The original Japanese cut comes in a DTS-HD MA stereo track that often pleases as much as it disappoints. Dialogue are clean and intelligible in the center, and the soundstage is consistently active with strong background activity and convincing off-screen effects. The score is spread evenly across the screen, creating an expansive image with great warmth and fidelity. However, dynamic range is noticeably flat and uniform with practically nothing of note in the higher frequencies. Low bass is not only lackluster and at best muddy, but it's practically non-existent during the best action sequences. Worse still is the lossless mix exhibiting a good amount of noise and distortion during several conversations and even in the loudest moments, which can be quite distracting.

For the Toho production company, 'Godzilla 2000' is both a modernized reboot of their arguably most famous franchise and a direct response to Roland Emmerich's 1998 disaster. For fans, watching Godzilla on the big screen and hearing Akira Ifukube's iconic theme was all that really mattered, showing Emmerich how to properly make a true disaster creature feature. The Blu-ray arrives with both versions of the film, showing minor but ultimately negligible difference in the video but the audio in the English dub is the clear winner. Supplements are disappointingly light, but devoted followers and kaiju enthusiasts will be very happy to add this to their collection.

Sale Price 11.99
List Price 19.99
Buy Now
3rd Party 7.27
In Stock.
See what people are saying about this story or others
See Comments in Forum
Previous Next
Pre-Orders
Tomorrow's latest releases