When suspected barnburner Ben Quick drifts into a town dominated by Will Varner, he is recruited to husband Varner's spinster daughter so that Varner can keep an eye on him. But the two men soon lock horns, and ultimately a chain of events leaves them all changed forever.

In 1958, Paul Newman played a couple of sullen, misunderstood, and internally tortured Southern men forced to deal with the exhausting vagaries of two dysfunctional families, each ruled by bombastic patriarchs and distinguished by sex-starved women whose frustrations seem to rise with the Mississippi heat. And while some might classify The Long, Hot Summer, based on the writings of William Faulkner, as a shameless rip-off of Tennessee Williams' Cat on a Hot Tin Roof, the truth is The Long, Hot Summer was released first and stands on its own as an involving, well-crafted film.

Its tense interpersonal conflicts may pale when compared to the depth and potency of Williams' Pulitzer Prize-winning drama, but The Long, Hot Summer still succeeds thanks to strong performances from an all-star cast and able direction by Martin Ritt, a master of earthy Southern yarns. How much true Faulkner the film contains is anyone's guess, as writers Irving Ravetch and Harriet Frank Jr. pepper their literate screenplay with all the de rigueur ingredients of 1950s soap opera - repressed longings, spicy innuendos, family feuds, and soul searching galore. Yet what sets The Long, Hot Summer apart from the period's other Peyton Place wannabes is the sizzling sexual tension between soon-to-be-married Newman and Joanne Woodward in their first film together - electricity so palpable it short-circuits the overblown melodrama.

The film opens memorably. A barn bursts into flames, disrupting a serene rural landscape, and the slapdash kangaroo trial of culprit Ben Quick (Newman) follows in short order. "A barn-burner's the meanest, lowest creature there is," bellows the town judge, and with that, he swiftly banishes the cocksure Quick, who drifts down river to a smug Mississippi community populated by domineering parents, sexually repressed young adults, and outdated ideals. In Frenchman's Bend, wives call their husbands "daddy," fathers call their daughters "sister," and the only subject unmarried women discuss is snaring a man. Twenty-three-year-old Clara Varner (Woodward) frets the redneck townsfolk have already branded her an old maid schoolteacher, an image fostered by her superior intellect, high-minded principles, and chaste five-year relationship with sickly mama's boy Alan Stewart (Richard Anderson). Yet lusty passions simmer beneath Clara's frosty veneer, waiting for the proper he-man to unlock them.

Enter the hitchhiking Quick, whom Clara and her knockout sister-in-law Eula (Lee Remick) pick up and drive into the town they literally own. Everything, from the general store and cotton gin to the gas station and bank, bears the Varner name. Sensing opportunity, Quick wiles his way into the good graces of big daddy Will Varner (Orson Welles), "quickly" rising from farm hand to store clerk. There he competes for stature and attention with spoiled, weak-willed Jody Varner (Anthony Franciosa), Will's emasculated son, who tries to prove his manhood to wife Eula as often as he can catch her and ceaselessly seeks his gruff and sadistic daddy's approval like a wounded lapdog. Will takes a shine to Quick, respecting his sass and bluster, and favors him over Jody. He also frets over daughter Clara's impending spinsterhood and conspires to marry her off to Quick, who initially finds the Varner lifestyle enticing before the Varner varnish wears off and exposes a family badly in need of long-term therapy.

Newman makes Quick a likable rascal and his sparring with ice maiden Clara culminates in a particularly passionate embrace after he melts her defenses with his smoldering sexuality. Woodward, fresh from her Oscar-winning triumph in The Three Faces of Eve, injects Clara with both steely resolve and thinly veiled vulnerability, qualities that heighten the impact of her memorable speech about her ideal relationship. For it is Clara, not Quick, who provides the film with its emotional center, and Woodward's well-modulated portrayal prevents The Long, Hot Summer from careening off-course.

Welles chews all the scenery he can find, but his gravelly accent and growling line deliveries often make his dialogue unintelligible. At 42, he believably plays a man of 61 (no small feat), but the makeup department matches his over-the-top portrayal, with facial hues reminiscent of minstrel shows and oily gray hair that looks as if it might drip off in the hot Southern sun. Welles is never boring to watch, but he becomes a caricature here, obviously trying to one-up his Big Daddy counterpart in Cat on a Hot Tin Roof. (No worries, Burl Ives. Welles can't eclipse you.)

The real surprises are Franciosa, who wrings out all of Jody's angst with heartbreaking intensity, and the young Remick (in only her second film), whose vivacious, sexy, uninhibited portrayal of vapid Southern belle Eula is irresistible.

Such involving performances (along with the gorgeous Louisiana locations) set The Long, Hot Summer apart from similar 1950s fare and make the material seem far better than it is. Similarities to Cat on a Hot Tin Roof notwithstanding - and there are far too many to count - Ritt's film celebrates the ties that bind and emphasizes the importance of being true to oneself. Amazingly, after all of its domestic disturbances and psychological warfare, The Long, Hot Summer leaves a warm, fuzzy glow. Not exactly true Faulkner, but pure Hollywood. 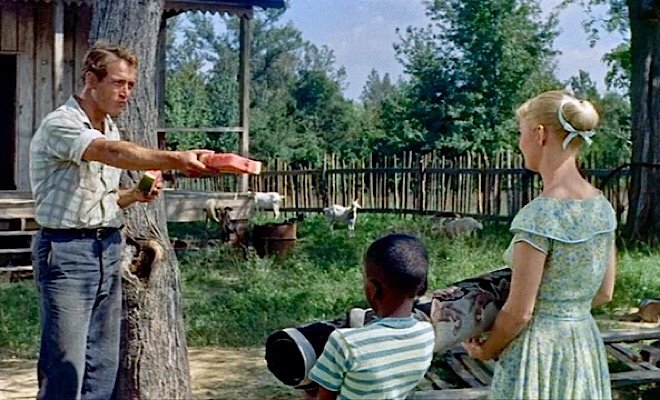 The Long, Hot Summer arrives on Blu-ray in a limited to 3,000 edition packaged in a standard case. An eight-page booklet featuring an essay by writer Julie Kirgo, a few tinted scene stills, and a full-color reproduction of the movie's poster art is tucked inside the front cover. Video codec is 1080p/AVC MPEG-4 and default audio is a newly remastered DTS-HD Master Audio 5.1 track. (A DTS-HD Master Audio 2.0 track is also included.) Once the disc is inserted into the player, the static menu without music immediately pops up; no previews or promos precede it.

The video quality on the 2003 DVD of The Long, Hot Summer was far from perfect, containing a fair amount of grain, dirt specks, and occasional white blotches, but thankfully those issues have been resolved in this vibrant, often stunning 1080p/AVC MPEG-4 transfer from Twilight Time (care of Fox). Well-pitched contrast and terrific clarity honor Joseph LaShelle’s warm, sumptuous cinematography, which beautifully showcases both the Louisiana locations and glamorous actors. Grain is still evident, but it blends seamlessly into the film’s fabric, and vivid color - from bold primaries to creamy pastels - often grab attention. Newman's trademark blue eyes are very blue, the stately green lawns are gloriously lush, and Welles’ red robe exudes plenty of pop. (Halfway through the film, director Ritt frames a breathtaking shot of Newman in a navy jacket, red tie, and white straw hat set against a sparkling lake and amber trees, all bathed in the glow of late afternoon sun - it’s quite an image, one that lends itself to a freeze-frame.) Of course, the superior color calls attention to Welles' heavy make-up, especially as his skin tones shift from scene to scene, but it's a forgivable fault. All the skin tones err a bit on the brownish side, although Woodward’s alabaster complexion is rendered quite well, and sharp close-ups exhibit plenty of fine details, such as glistening sweat and facial stubble.

Blacks levels are rich and deep, whites are bright but never bloom, and patterns remain rock solid. Excellent shadow delineation keeps crush at bay and hardly a single blemish mars the pristine source material. Though a few segments look a tad faded (a common symptom of the cheaper single-strip color that became the Hollywood standard during this period), they don’t detract from the rest of the high-quality presentation. I began to wonder whether The Long, Hot Summer would ever make it to Blu-ray, but this very pleasing transfer that immerses us in the distinctive atmosphere of the South makes this release well worth the long wait.

A newly minted DTS-HD Master Audio 5.1 track supplies clear, well-modulated sound, although some of Welles’ explosive growls flirt with distortion. There’s not much surround activity, but some distinctive stereo separation across the front channels nicely widens the soundscape. Footsteps are crisp and distinct, and ambient effects like chirping crickets provide essential atmosphere. Excellent fidelity and tonal depth help Alex North’s string-laden score fill the room with ease, and although Welles tries his best to garble his lines, most of the dialogue is easy to comprehend. Strong bass frequencies add essential weight to the track, and no age-related hiss, pops, or crackles intrude. Purists will appreciate the inclusion of the film’s original stereophonic track, presented in a lossless DTS-HD Master Audio format, and an isolated music track provides a third listening option.

All the extras from the 2003 DVD (with the exception of a few Paul Newman trailers) have been ported over to this Blu-ray release. It's too bad there's no Julie Kirgo-Nick Redman audio commentary; I always look forward to those, and would have loved to hear their take on this sexy Southern soap opera.

Featurette: "Hollywood Backstories: The Long, Hot Summer" (HD, 21 minutes) -  This absorbing installment of the now defunct AMC series was produced in 2001 and includes charming contemporary interviews with Newman and Woodward (who still exude a wonderfully playful chemistry), Angela Lansbury, and Richard Anderson. The episode examines the Newman-Woodward romance, the egotism and insecurity of Welles (Lansbury says he was a "son of a bitch at times"), Franciosa's legal troubles, and how director Martin Ritt worked his way back into commercial Hollywood after a stint on its blacklist.

Theatrical Trailer (HD, 3 minutes) - The film's original preview plays up the story's steamy elements and promises to tell "the naked truth" about its colorful characters.

Packed with memorable characters, riveting performances by old pros and brash newcomers, and sexual tension galore, The Long, Hot Summer ranks as one of the better - and more daring - 1950s melodramas, and holds up surprisingly well today. The inaugural teaming of Newman and Woodward whets the appetite for their future collaborations (although their work here is tough to top) and the explosive dynamics of the tangled relationships ignite the screen. Excellent video and audio transfers and a couple of good supplements distinguish Twilight Time's limited edition Blu-ray presentation and make it easy to endorse this glossy romantic classic. Highly Recommended.