'All men are alike. The approach is different, but the result is always the same."

Back in the puritanical 1950s, Peyton Place was incredibly hot stuff. Audiences hankering for a sultry soap opera got their money's worth, even if Mark Robson's glossy production severely watered down Grace Metalious' scandalous novel of small-town life. Still, this classic Hollywood potboiler bubbles over with taboo topics -- incest, rape, teen pregnancy, abortion, premarital sex, alcoholism, murder, illegitimacy. That's quite a menu for a movie, even by today's permissive standards, but somehow Peyton Place tastefully depicts its sordid events. And for all of us closet voyeurs, it's a helluva lot of fun watching everyone's dirty little secrets spill out into the open.

Of course, plenty of moralistic speeches condemn the sleazy behavior, with some of the characters' heavy-handed orations more difficult to swallow than their lascivious acts. But that's the way American movies were made in 1957, and the pious preaching adds a quaint charm to the film. Screenwriter John Michael Hayes (Rear Window) cleans up Metalious' dumpy New England town and sanitizes many of its residents, transforming Peyton Place into a Hollywood version of a Norman Rockwell painting -- bucolic, tranquil, seemingly idyllic -- which makes all of the seedy goings-on doubly shocking.

The saga of tangled lives and loves begins in the months before Pearl Harbor in 1941. War rages in Europe, but battles are brewing in Peyton Place, too, as rebellious teens fight to free themselves from both their controlling, over-protective parents and the community's judgmental attitudes and insidious gossip. As the seasons change (underscored by insipid narration from star Diane Varsi), the town, like its graduating high school seniors, comes of age, shedding its innocence and confronting its darker side.

Though Peyton Place's steam has dissipated over the years, it remains an entertaining period piece and searing indictment of conservative rural values. Several scenes that once titillated now provoke merely titters, especially when punctuated by thunderous musical accents courtesy of Franz Waxman. Director Robson also errs by transforming a hot-button soap into a full-blown epic. He beefs up trivial story elements, overdevelops characters, and spends far too much time creating atmosphere, thus bloating Peyton Place to a whopping 157 minutes.

Performances, however, generally impress. Turner, in her first mother role, does a good job as the sexually repressed single parent, but is saddled with the wooden Philips as the man who stokes her dormant passions. Philips' nasal voice and stiff demeanor sabotage his earnest speeches and douse any sparks that fly between him and Turner. Varsi and Tamblyn share some tender (and identifiable) moments as they awkwardly explore young love, but Lange steals the picture as the victimized Selena. With heartbreaking dignity, Selena endures an avalanche of misfortune and despair, yet Lange resists the temptation to overact, turning in a natural, emotionally affecting portrayal that resonates after the film ends. Lloyd Nolan, as blunt, level-headed Doc Swain, also shines, injecting welcome humor into his role by giving the uppity Peyton Place residents the swift kick in the pants they so richly deserve.

The blockbuster success of Peyton Place -- which earned nine Academy Award nominations, including Best Picture, Director, Actress [Turner], Supporting Actor [Kennedy and Tamblyn], Supporting Actress [Lange and Varsi], Adapted Screenplay, and Cinematography -- spawned countless imitations and laid the groundwork for TV's durable daytime dramas. The original, though, still holds our interest, and reminds us how far we've come -- socially, politically, and sexually -- since the movie was first released. Few would term Peyton Place a great film, but its classy presentation, solid acting, and salacious subject matter make it the most iconic melodrama of the 1950s. 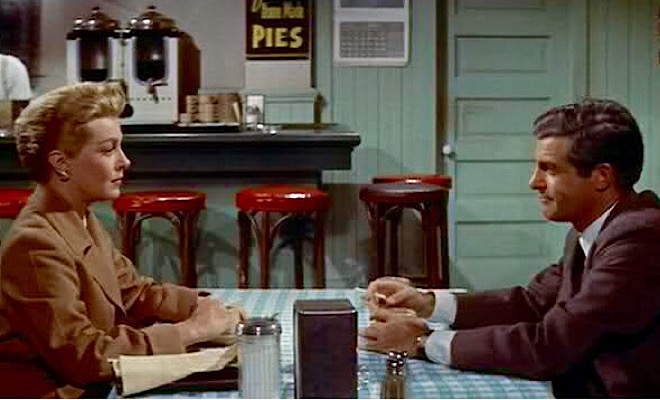 Peyton Place arrives on Blu-ray packaged in a standard case. An eight-page booklet featuring an essay by film historian Julie Kirgo, color scene stills, and a reproduction of the movie's poster art is tucked inside the front cover. Video codec is 1080p/AVC MPEG-4 and audio is DTS-HD Master Audio 5.1. Once the disc is inserted into the player, the static menu without music immediately pops up; no previews or promos precede it.

Peyton Place deserves a lush, sumptuous transfer, and Twilight Time (courtesy of Fox) delivers with a superior 1080p/AVC MPEG-4 rendering that's a nice step up from the 2004 DVD. Much of the film was shot on location in Maine, and renowned cinematographer William C. Mellor (A Place in the Sun, The Diary of Anne Frank) captures the depth and detail of the country scenery with an unerring eye. Exceptional contrast and clarity highlight a razor sharp image that's often bathed in a warm glow and bursting with lustrous color. The verdant greens of landscapes, crystal blues of sky and sea, bold reds, and creamy pastels all combine to create an eye-popping picture. Deep, rich blacks, crisp whites, and natural flesh tones heighten the visual impact, as do good shadow delineation, rock solid patterns, and strong costume textures. Faint grain preserves the film-like feel and any age-related debris that marred the previous release has been meticulously erased. Few soap operas are as glossy as Peyton Place, and this spic-'n'-span transfer buffs the film up to a fare-thee-well, making it delicious eye candy for classic movie fans.

Brand-new DTS-HD Master Audio 5.1 and DTS-HD Master Audio 2.0 tracks replace the Dolby Digital 4.0 track on the previous DVD, and both supply robust yet well-modulated sound. Superior fidelity lends the audio a lovely depth of tone, while a wide dynamic scale handles all the sweeping highs and foreboding lows of Franz Waxman's romantic (if, at times, bombastic) score without a hint of distortion. Strong bass frequencies supply necessary weight, and though surround activity is difficult to detect, noticeable stereo separation across the front channels (especially when any music kicks in) nicely widens the soundscape. Subtle details come through well, too, most notably during the scene when Lucas chases Selena through the woods and they frantically trample through the underbrush. All the juicy dialogue is clear and comprehendible, and no annoying imperfections like hiss, pops, and crackles muck up the mix. Small town films don't usually have great sound, but Peyton Place is a glorious exception, and this high-quality track maximizes every aural element.

All the extras from the 2004 Fox Studio Classics DVD have been ported over to this Blu-ray release, and a couple of new supplements are included as well.

Audio Commentaries - Two commentaries are included on the disc. One is new and one is recycled from the previous DVD release.

The first commentary is a new track featuring filmmaker and historian Willard Carroll, who provides a straightforward and enthusiastic production chronicle laced with interesting bits of trivia. He compares the "angry novel" (which he reveals outsold Gone With the Wind) to its film adaptation, supplies plenty of biographical and career information pertaining to the cast and crew, and points out many of the movie's Maine locations. (Carroll even admits he moved to Maine after more than three decades in L.A. largely because of his obsession with Peyton Place.) He also addresses how the film condemns social and religious hypocrisy, mentions deleted scenes, identifies stock footage from Carousel and Hitchcock's The Trouble with Harry, explains why Lana Turner didn't accompany the rest of the cast to the Maine locations, praises cinematographer William Mellor's use of CinemaScope, and discusses  both the Peyton Place sequel (Return to Peyton Place) and TV series. Carroll often pauses to let various key scenes play out, which disrupts the flow of his remarks, but his intelligent analysis of the movie and lively delivery make this track worth the substantial time investment.

The second commentary, recorded in 2004, is a scene-specific track with actors Russ Tamblyn and Terry Moore, who make some noteworthy points, but have trouble sustaining interest over the course of such a long film. Unfortunately, Moore sounds as if her remarks were recorded at the bottom of a well, and during one considerable (and annoying) stretch, she talks with her mouth full of food! Moore recalls how Turner's lover at the time, the notorious Johnny Stompanato (more about him below), would stand behind the camera and intently watch the actress during her scenes with Lee Philips. She remembers Stompanato as "tall and very handsome, in a very Italian-stallion way," while Tamblyn notes, "He looked like trouble to me, and he was trouble." Moore admits to worshipping Turner, and gushes over her beauty, style, and talent to excess. She also lists being named the number one pin-up girl during the Korean War as "the greatest thrill of my life." Tamblyn often strays from discussing Peyton Place, regaling us instead with stories about his career and friendships with Elvis Presley, James Dean, and Robert Mitchum. He calls Philips "stiff, stodgy, and arrogant" and "not a great leading man," and discusses Diane Varsi's stimulating rehearsal methods. Both actors speak with special fondness about the fun and camaraderie on the set and what a wonderful time they had making the film. Toward the end, lengthy gaps in the commentary make listening a chore, but admirers of the movie will surely want to check out at least a portion of Tamblyn and Moore's memories.

Featurette: "On Location in Peyton Place" (HD, 8 minutes) - This new supplement takes us back to the mid-coast Maine area where Peyton Place was shot and showcases the film's various locations as they look today. Excerpts from the screenplay identify most of the locations, and Franz Waxman's original theme music underscores the presentation. Optional audio commentary by Willard Carroll, who also directed this featurette, greatly enhances this nostalgic journey, which will only appeal to the movie's most ardent admirers.

Sexy melodramas have certainly evolved since Peyton Place, but this 1950s classic set the standard for the genre. Though it seems rather tame today, Mark Robson's film remains an engrossing (if overlong) saga distinguished by sterling performances and glossy production values. Twilight Time's Blu-ray presentation salutes the drama with a first-class transfer, solid audio, and entertaining extras, all of which help this steamy potboiler earn a solid recommendation.