The epic adventure, Saban’s Power Rangers follows five ordinary high school kids who must become something extraordinary when they learn that their small town of Angel Grove – and the world – is on the verge of being obliterated by an alien threat.  Chosen by destiny, the unlikely group of teenage heroes are the only ones who can save the planet, but first, they have to band together in order to harness their super powers and become Power Rangers.

By the end of the first act of Power Rangers, it would seem the makers behind this reboot of the martial arts superheroes from the widely popular 90s television series want to express a message to all the juvenile delinquents watching. Then again, would any rebellious miscreants really be watching this in the first place? Although I was pleasantly surprised by the movie in the end, even I dragged my feet going into this. But, whatever, the filmmakers clearly want the outcasts, the unruly and the misunderstood to know they are special because those disruptive, defiant feelings of angst are actually a deep-rooted energy source for good. All one has to do is find four other troublemakers, ignite explosives at a gold mine, discover the five brightly-colored Power Coins hidden beneath rock layers and a spaceship powered by the consciousness of another Power Ranger who died 65 million years ago and voiced by Bryan Cranston. Do all those things, and that troubled teen is on their way to becoming a bona fide, honest-to-goodness superhero.

Except for redheaded bullies with hair that looks as though it were licked by a cow but didn't bother to comb it and mean popular cheerleaders. They are not welcomed. A line has to be drawn somewhere.

But in order to separate our five would-be heroes from that lot, we are shown they are not really bad kids, starting with Jason Scott (Dacre Montgomery), the school football star and local celebrity apparently. There's a scene of him riding his bicycle across town, and people stop to stare while traffic literally moves out his way. A failed prank resulted in house arrest and Saturday detention for the rest of the school year. There, he meets two of his future teammates, Kimberly Scott (Naomi Scott) and Billy Cranston (RJ Cyler). Scott did a very bad thing ruining a friend's trust, and Billy...? Well, he's the typical highly intelligent nerd who really loves playing with explosives. In a mix of plot convenience and cosmic fortuity, the last two Rangers, Trini (Becky G) and Zack (Ludi Lin), were already unwinding in search for some peace of mind at the quarry when the other three made a big boom, disrupting their tranquil meditation. In this world, apparently, mischief-makers take a break from all the, you know, mischief by doing yoga or admiring nature. 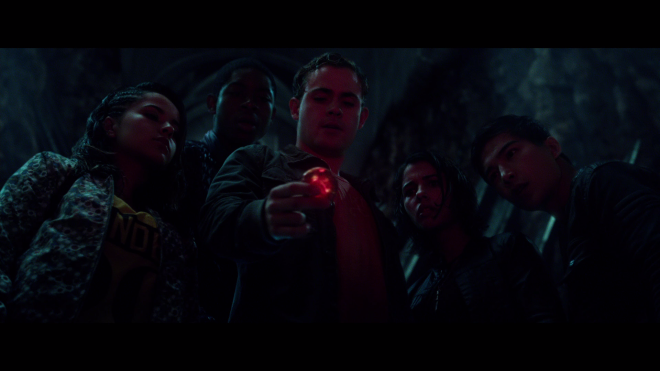 In fact, these post-Millennials only occasionally look at their phones, entirely dependent on how those devices help in moving the plot along, making these five characters rather unique conceits of pure fantasy. In one scene, Kimberly even crushes her phone with her bare hands, first to demonstrate her new power granted by her purplish pink Power Coin and second as some metaphoric act of defiance, related not only to the bad thing she did but also to encourage younger viewers to unplug. This isn't outside the realm of possibility since part of their learning to morph as a team is in large concerning their behavior, troubled homes and trying to figure out their place in this big, scary world. While Billy discovers a sense of belonging among people who like him as he is, Jason begins to value the meaning of being a leader. Zack realizes the importance of spending time with loved ones rather than running away due to fear, and Trini comes to terms with who she is in spite of her family's strict conservative views. As is to be expected, this all comes to a head in one pivotal, emotional scene around a bonfire on the eve of a villain set to destroy their home.

This is arguably the most surprising aspect of Power Rangers, a reboot of live-action series I never cared for or even watched — mainly because I was too old and past the targeted demographics. Each of the characters is a unique personality with genuinely troubling problems that explain their delinquent behavior and perspective of the world. From a script by John Gatins (Flight, Kong: Skull Island), South African director Dean Israelite (Project Almanac) don't simply have the kids become a team, but he has them earn it, starting with learning to get along and using their anger for something greater than themselves. When Rita Repulsa (Elizabeth Banks chewing up the scenery with wicked delight) shows up, she functions as an emblematic example of what that unchecked rage can become; she used to be a Green Ranger until her anger and greed completely consumed her. Sadly, as entertaining as much of this is, the movie really feels as though it takes off during the final battle. The story teeters between serious teen drama and cheesy campiness, but never fully embraces either while still remaining strictly focused on an endgame. In the end, it's made from various good parts, but it just never fully morphs into the hoped-for Megazord.

Summit and Lionsgate Home Entertainment bring Power Rangers to Blu-ray as a two-disc combo pack with a flyer for an UltraViolet Digital Copy. The Region A locked, BD50 disc is joined by a DVD-9 copy of the movie and housed inside a blue, eco-elite case with a glossy slipcover. After several skippable trailers, viewers are taken to a menu screen with full-motion clips and music.

The mighty morphing power rangers find common ground on Blu-ray to do battle with the aide of a stunning, reference-quality 1080p/AVC MPEG-4 encode. The movie was shot on the Red Epic Dragon camera system, capable of up to 6K resolution and later transferred into a 4K digital intermediate, which would explain the razor-sharp definition in the clothing and costumes. Viewers can make out the threading and stitching in the Power Ranger uniforms while seeing every smudge of dirt and blemish on Rita Repulsa's surprisingly sparse outfit. The tiniest object aboard Zordon's spaceship is clear and distinct in the distance, the internal wires of Alpha 5's robotic body are clearly delineated, and the lettering on buildings and signs are intelligible throughout. Even the CG animation is highly detailed, which is typically done at 2K resolution, but reportedly, the filmmakers shot the superhero actioner with high-quality video formats in mind. In either case, the little bits of debris are discrete while the oozing lumps of gold in either Rita's staff or Goldar's body come with small cracks and imperfections.

Presented in a 2.40:1 aspect ratio, the video continues to impress with spot-on, pitch-perfect contrast from beginning to end, keeping the action and drama endless bright and vivid. Whites radiate with intensity and luminosity without fail or hampering other areas of the picture. Better still, brightness levels deliver luxurious, inky-rich blacks throughout, providing the image with excellent dimensionality and an appreciable cinematic quality. Individual black hairs remain separate from each other, the mesh lines in Alpha 5's arms are resolute, and the darkest portions of the frame never ruin the finer details. Topping things off is a vibrant, animated color palette that gives each of the teen superheroes a lifelike glow when donning their uniforms. Rita's emerald green costume shines in the sunlight, there is a sparkling twinkle in every scene featuring gold, and various other secondary hues glow with life. Facial complexions appear natural and accurate with lifelike textures, making this HD presentation shockingly beautiful to enjoy.

The ragtag group of juvenile delinquents wreak havoc upon a small town with the help of an outstanding, demo-worthy Dolby Atmos soundtrack that utilizes the entire soundscape on various occasions.

The most surprising aspect of the design is how often the ceiling channels are employed, not only during explosive action sequences but also in several of the more mundane, dialogue-driven moments. When Jason visits Billy, mom's voice can be heard in the top rear, or while the kids are training, the sound of water dripping and tiny pebbles fall all around the entire room. There are also several scenes of conversations echoing into every speaker, adding another layer of realism. When the action erupts in the last quarter of the movie, debris flies in every which direction and Pink Ranger's Dinozord flies overhead with flawless panning, generating a terrifically satisfying dome-like soundfield.

Amid all the mayhem and destruction, vocals remains distinct and crystal-clear, never drowned out by the thundering commotion. The mid-range, too, exhibits superb detailing, delivering every ear-piercing blast and racket with marvelous precision and fidelity. Metal scrapes against metal with striking, high-pitched clarity that never distorts while fragments and debris from buildings discretely sprawl across the soundstage and into the front heights. The low-end is particularly noteworthy and impressive, providing the design with a shockingly authoritative presence during the explosive action and powerfully emphatic beat to the music. Most surprising of all are the several unexpected moments of ultra-low bass in key sequences, digging well below 20Hz with some appreciable decibels (bass chart).

Audio Commentary: Director Dean Israelite and screenwriter John Gatins discuss the various aspects of the production with a few insights on the characters and plot themes while comparing the original show.

The Power of the Present (HD, 140 min): Nine-part documentary touching on every facet of the production imaginable, starting with the young cast sharing memories of the original show. Made from a mix of cast & crew interviews, BTS footage and film clips, the rest of the series discusses the differences in the reboot, the casting, the costumes, the fight choreography and more.

Rangers Then to Now

Ranger in the Wild

This Is Your Destiny

Walking into Power Rangers with the lowest possible expectations is probably the best way to watch the reboot of the widely popular 90s television series. Starring Bryan Cranston, Elizabeth Banks, Bill Hader and a young talented cast, the superhero actioner is surprisingly entertaining with a poignant coming-of-age drama centering around a group of troubled teens struggling to find their place in the world. The Blu-ray lands with an amazing, reference-quality audio and video presentation that fans will absolutely love. With a strong collection of supplements to boot, the overall package is surprisingly recommended.

Sale Price 9.49
List Price 14.99
Buy Now
3rd Party 13.99
In Stock.
See what people are saying about this story or others
See Comments in Forum
Previous Next
Pre-Orders
Tomorrow's latest releases