Project Almanac follows a brilliant high school student (Jonny Weston) and his friends who discover blueprints for a machine that can send them back in time. They soon rewrite history to win the lottery, ace exams, and party like there's no tomorrow. But by changing the past, they have threatened the future of our world. Can they undo the damage they have unleashed before it's too late?

Though not very original or particularly profound considering its subject matter, 'Project Almanac' is a smart, stimulating, and spirited sci-fi thriller that treats the theme of time-travel with some level of seriousness. Given the current slew of movies targeted at teens as of late — minus a few noteworthy exceptions, of course — this small-budgeted treat from director Dean Israelite, making his feature-length debut, and produced by Michael Bay is a welcome delight. Again, we're not talking anything terribly challenging or insightful, but the filmmakers deserve come credit for at least tackling the consequences of altering the past with a sense of gravity and urgency, essentially introducing the concept of the butterfly effect to audiences unfamiliar with it. Granted, the story from first-timers Jason Harry Pagan and Andrew Deutschman could've dug deeper into the premise and regrettably shrinks from taking its dark conclusion full circle, but it confronts real emotional reactions young viewers can relate to.

Too few teen movies genuinely wrestle the issues contemporary kids cope with without also seeming as if they're pandering or exploitative. Adaptations of popular young adult books, even the good ones like 'The Hunger Games' series, are blatant cash grabs of the latest trends. So, it's a nice fresh breath of air when these types of movies, like 2012's 'Chronicle,' treat their audience with some respect and intelligence, delivering a tale on the moral dilemma of possessing a power a premature mind isn't quite ready for. Of course, in order to bring such a predicament to fruition, the filmmakers, unfortunately, rely on good-ole stock characterizations and stereotypes. Our main protagonist is 17-year-old high school senior David Raskin (Jonny Weston), an exceedingly bright young man with aspirations of being accepted to the robotics program of MIT. His shockingly amazing invention is apparently beneath the full scholarship standards of the prestigious school, which admittedly is a bit absurd for any fictional world. 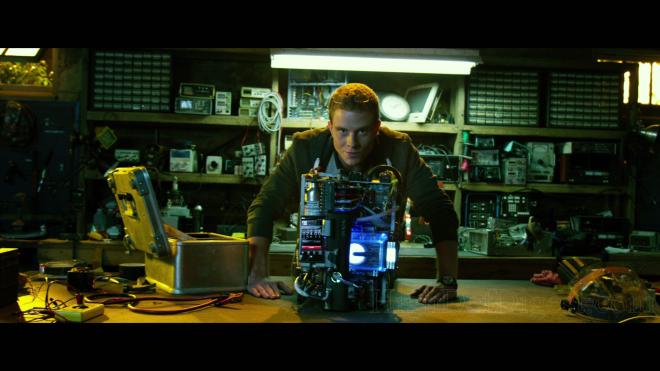 Anyhow, he's your typical male teenager with the hots for the most beautiful girl at his school, Jessie (Sofia Black D'Elia). It's obvious how this aspect of the story will go, which could be counted as a fault, but I would argue a necessary one for also establishing the film's overarching theme. When discovering their dad was secretly working on a temporal relocation device — aka, a time machine for all you non-nerds out there — David and his sister Christina (Virginia Gardner) decide to finish their deceased father's project. After enlisting the help of long-time friends Adam (Allen Evangelista) and Quinn (Sam Lerner), the kids do precisely what we'd expect teenagers to do: satisfy selfish desires without consideration to the repercussions, the effects their seemingly trivial alterations may cause. This is where the film engages best, the friends realizing that a simple trip to Lollapalooza three months prior causes a damaging ripple effect. More importantly, David wanting a do-over of a missed moment with Jessie forces him to confront that his relationship comes at a great expense.

As mentioned earlier, however, 'Project Almanac' fails to truly scrutinize its subject matter with a more critical eye, despite featuring a likable cast of characters reacting to their situation with believability. The tired found-footage gimmick is one of the most tedious aspects, capturing private intimate moments much too conveniently. Yet, the filmmakers manage to create an enjoyable enough piece of entertainment. For older, well-versed moviegoers, several allusions to other time-traveling flicks are sprinkled throughout with the title already making reference to 'Back to the Future' franchise, which one perceptive kid mentions as an aside and later, David draws a timeline similar to Doc Brown's explanation for alternate universes. Sure, it's somewhat silly to see them study 'Bill & Ted's Excellent Adventure' for learning the complexities of time travel, but it's plausible. This generation of kids is not as likely to read "The Philosophy of Time Travel" or H.G. Wells as they are to rely on cultural knowledge. In spite of a few minor flaws, the film is more engaging than most sci-fi features targeted at teens, which sadly is saying much.

Paramount Home Entertainment brings 'Project Almanac' to Blu-ray as a two-disc combo pack with a flyer for an UltraViolet Digital Copy. The Region Free, BD50 disc is housed inside a blue eco-vortex case with a DVD-9 on the opposing panel and a glossy slipcover. After a few skippable trailers, viewers are taken to a static menu screen with music.

The kids "cause a chain reaction that unravels the very fabric of the space-time continuum" on Blu-ray with an excellent 1080p/AVC MPEG-4 encode. Looking every bit like a product of high-def photography, the freshly-minted transfer has that sterile, digitized appearance that doesn't always look attractive on the big screen. Nonetheless, the 2.35:1 image comes with sharp definition and resolution, showing fine, detailed lines around various objects, the fabric of clothing and in the leaves of trees everywhere. Facial complexions appear healthy and revealing during close-ups, and primaries are energetic while secondary hues are bold and full-bodied. Although whites are bright and clean, contrast levels run a tad hot, flattening and dulling the picture in a few sequences. Though not always consistent, blacks are true and accurate, providing some great dimensionality throughout. Overall, it's a great looking presentation.

The young time-travelers make a loud ruckus and celebrate life with a crowd-pleasing and often fantastic DTS-HD Master Audio soundtrack that have viewers wanting to travel with the time-wasting troublemakers. The design doesn't exactly take full advantage of the entire soundscape, but the surrounds are occasionally employed. Atmospherics are generally reserved for those moments when the kids turn on the device or when they are enjoying the Lollapalooza concert, but they are great sequences which create a satisfyingly immersive soundfield. The track is more of a front-heavy design with much of the action and excellent panning effects maintained within the front soundstage. Dynamic range is extensive with sharp clarity and separation between the highs and mids, and the vocals are clean and distinct in the center, never overwhelmed by the track's loudest moments. Bass is plentiful at times with several great moments that add some weight to the action, but it fails to dig as deep as the visuals promise or imply (Bass graph). Nevertheless, the lossless mix is a fun listen with plenty to appreciate and enjoy.

Though not very original or particularly profound considering its subject matter, 'Project Almanac' is a smart, stimulating and spirited sci-fi thriller that treats the theme of time-travel with some level of seriousness. With a likeable cast of characters, the movie is satisfyingly entertaining. The Blu-ray arrives with a strong audio and video presentation, but supplements are a bit lackluster. Nonetheless, the overall package is sure to please fans, but the curious should give it a rent before deciding.

Sale Price 13.98
Buy Now
3rd Party 2.18
In Stock.
See what people are saying about this story or others
See Comments in Forum
Previous Next
Pre-Orders
Tomorrow's latest releases