The one and only Robert Ryan stars in Inferno (1953) as a crusty millionaire left in the desert to die by his wife (Rhonda Fleming) and her lover (William Lundigan). This tale of survival is enriched as Ryan transforms, via his ordeal, from a bitter defeatist to a crafty new man. Directed by Roy Baker and shot by legendary cinematographer Lucien Ballard (The Wild Bunch).

"They sure had a nice set-up. Pretty near perfect. Just one little fault. They picked the wrong guy."

With its taut story, desolate locations, and efficient direction, Inferno is a nifty little western film noir. Yet the addition of eye-popping 3D lofts this entertaining B movie into Class A territory. While many films of the early 1950s got swept up in the 3D craze (which only lasted a few brief years), only a precious few really embraced the process, and Inferno is one of them. Director Roy Baker makes a concerted effort to add artistry to a format built on gimmickry, and though he occasionally tosses in some clichéd effects (how could he resist?), he always makes intelligent use of 3D, which lends this gritty, outdoorsy tale essential authenticity and an in-your-face immediacy that heightens involvement and suspense.

Deep in California's Mojave Desert, crippled millionaire Donald Carson (Robert Ryan) sits atop a craggy bluff awaiting rescue after a fall from a horse leaves him with a broken leg. His gorgeous wife Geraldine (Rhonda Fleming) and business colleague Joseph Duncan (William Lundigan) witnessed his accident, and they assure Donald they will send a helicopter to retrieve him once they trudge back to the area ranch and notify the police. But when no help arrives, it dawns on Donald his beloved wife is two-timing him and she and her hunky squeeze have left him in the desert to die. The adulterous couple concocts a bogus story to cover their tracks, and hopes the pampered Donald will quickly become disheartened and expire in the blistering heat. As time creeps by, a jittery Geraldine and Joseph try to play it cool and ease their guilty consciences while anxiously awaiting word of Donald's demise.

Vengeance, however, is a prime motivator, and Geraldine's betrayal fuels Donald's will to survive. With a resourcefulness that belies his cushy lifestyle, Donald pulls himself up by his bootstraps, constructs a makeshift splint for his leg, and begins a treacherous trek across the desert. He forages for food and water, navigates difficult terrain, and sends signals to hopefully draw attention to himself, all while dreaming about confronting his faithless wife and her illicit lover once he returns to civilization.

On its surface, Inferno strongly resembles other lusty, murderous noirs like Double Indemnity and The Postman Always Rings Twice, but its wilderness setting and survival motif put it in a different and unique realm. Nature is the primary villain here, and it's a formidable foe out to foil Donald at every turn. As a Howard Hughes-like mogul who's used to having someone satisfy his every whim, Donald is hopelessly out of his element, and learning to live by his wits and tackle tremendous physical challenges requires a Herculean resolve. Geraldine and Joseph may have put him in his desperate predicament, but they're hoping the harsh desert terrain will wield the fatal blow and absolve them of criminal guilt. Rarely must a noir hero vanquish two very different enemies in one movie, but in Inferno, Donald is the victim of an exceedingly cruel double whammy. And if he can't beat nature, he won't be able to exact revenge on the nasty lovers who foolishly doubted his intense will to live.

The location shooting greatly enhances Inferno's effectiveness, and the addition of 3D really puts the viewer in Donald's shoes. Baker makes the parched landscape a major character in the drama, and as nature works both for and against Donald, we respect its power and richness while marveling at its beauty. The 3D cameras of the day were reportedly quite cumbersome, yet Baker and cinematographer Lucien Ballard somehow perch them in precarious positions and capture dynamic angles that provide the movie with stunning and realistic perspectives. By contrast, the interiors lack distinction and appear dull, but thankfully, Baker can't wait to get back outside and resume chronicling Donald's perilous and exhausting adventure.

Ryan built a career playing introverted loners, and although Inferno is never mentioned as one of his best portrayals (perhaps the 3D process overshadowed his work when the film was initially reviewed), he brings to his role an affecting strength and conviction. Much of the time he's by himself battling the elements and performing tough tasks while a steady stream of voiceover narration records his thoughts. Ryan handles both chores well and makes sure we're in Donald's corner from the get-go, despite the character's arrogance and brusqueness. Less is always more with Ryan, and this understated, physical performance compares quite favorably with his work in another desert yarn, Bad Day at Black Rock, shot two years later.

Fleming was informally dubbed the "Queen of Technicolor," and she lives up to the moniker here. Her flowing red hair and peaches-and-cream complexion look terrific in color and breathtaking in 3D, and she's not a bad actress either. Though she'll never be known as the Queen of Noir (too many others could compete for that coveted title) and isn't as fatal as some femme fatales, Fleming can pout, glower, connive, and sweet-talk like a pro, and her fine work contributes to Inferno's scorching heat. Lundigan is capable enough as her partner in crime, but lacks the magnetism of more imposing leading men.

When it's good, 3D can be very, very good, and Inferno ranks as one of the best examples of 3D during its initial 1950s heyday. Yet this exciting, engrossing tale of one man's fight for survival against impossible odds doesn't need 3D to be successful. Though it may not be particularly renowned, Inferno stands on its own as a tough, no-nonsense film noir that's distinguished by a lean script, provocative premise, and solid performances. 3D just makes it that much better. 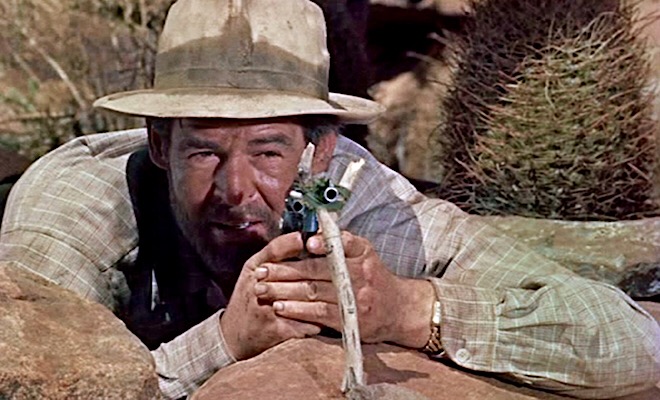 Inferno arrives on Blu-ray in a limited to 3,000 edition packaged in a standard case. An eight-page booklet that includes an essay by writer Julie Kirgo, tinted portraits of the film's stars, and a reproduction of the movie's poster art is tucked inside the front cover. Video codec is 1080p/MVC MPEG-4 for 3D and 1080p/AVC MPEG-4 for 2D, and audio is DTS-HD Master Audio 1.0. Once the disc is inserted into the player, the static menu without music immediately popped up; no previews or promos precede it. If your television is 3D capable, the film will automatically play in 3D; if it is not, the 2D version will be shown.

Some movies go through the motions of 3D; others embrace the process. Inferno goes all in, infusing almost every scene with a palpable 3D feel that literally brings the film into our living rooms. And the stunning, often breathtaking 1080p/MVC MPEG-4 transfer from Twilight Time (care of Fox) maximizes every dimensional element. Though the source material is far from perfect - hues are a bit faded, grain levels fluctuate, and plenty of speckles dot the print - the consistent quality and intense vibrancy of Lucien Ballard's exceptional 3D photography makes this a stimulating visual experience from start to finish. Contrast isn't particularly bold, but excellent clarity brings the rugged desert landscapes to life, and bursts of beautifully saturated color (especially Fleming's radiant red hair and a deep blue dress she wears in an interior scene) provide moments of splendor. Black levels are rich and deep, whites are crisp, flesh tones look fairly natural, and sharp close-ups highlight Fleming's creamy complexion and the sweat and grime that consistently cover Ryan's face.

But this transfer is all about the 3D, and countless moments - be they gimmicky or not - provoke visceral reactions. From a hillside jutting out of the screen to a shower of red rocks tumbling off a bluff; from a crumbling ceiling engulfed in flames to a chair thrown directly at us...the 3D effects are top-notch. Even standard interior dialogue scenes exude a palpable sense of dimension, so we feel a part of the action. The canyon sequences are especially effective, as the third dimension greatly enhances the rugged natural expanse, making chasms seem deeper and alcoves appear more cramped. If you love 3D like I do, you've got to take a gander at this fantastic transfer that beautifully honors one of Hollywood's best 3D films.

The 1080p/AVC MPEG-4 2D transfer looks much the same as the 3D transfer, but lacks the pop and pizzazz. Some of the imperfections aren't quite as noticeable because they aren't enhanced by 3D processing, but they're still there.

Inferno was one of the first films to employ a stereophonic soundtrack (although only a handful of theaters at the time were equipped to play it), but unfortunately there's only a mono track on this disc. That said, the nicely restored DTS-HD Master Audio 1.0 track does its best with what it has to work with. Ryan's voiceover narration is clear and easy to understand, but some of the dialogue occasionally gets muddled. Effects like gunfire, car engines, crackling flames, and crumbling rocks are crisp and distinct, and though the music score overwhelms the action at times, it fills the room with ease. No age-related surface noise intrudes, and though a wide dynamic scale keeps distortion at bay, a nagging hollowness often lends the audio a slightly artificial tone. Still, this is a solid effort that serves the action well and should satisfy the film's fans.

All the supplements from 2008 DVD have been ported over to this Blu-ray release.

Audio Commentary - Film historian Alan K. Rode provides a rather bland commentary that never quite piques our interest like we hope it will. Inferno was not one of 20th Century Fox's flagship productions in 1953, so the amount of behind-the-scenes information available is probably slim. Rode does his best with what he has to work with, but spends most of the 84 minutes discussing the life and career of Robert Ryan, who he calls "one of the most compelling film noir actors." He also shares some brief bios of cast and crew, talks about the need to post-sync much of the location dialogue due to strong desert winds, provides a brief overview of 3D technology, and divulges the film's original ending. Ryan's daughter, Lisa, also chimes in for a few minutes in separately recorded remarks to offer an intimate view of her father's background and character, citing his shy, introverted personality and commitment to political and social causes. Fans of Ryan and the film might find a few interesting nuggets here, but most viewers shouldn't bother with this ho-hum track.

Featurette: "A New Dimension of Noir: Filming Inferno in 3D" (HD, 16 minutes) - This slick featurette includes comments from a gaggle of critics and creative personnel - chief among them Rhonda Fleming (who fondly remembers her "naughty girl roles"), Robert Ryan's daughter Lisa, noir expert Eddie Muller, and TCM host Robert Osborne - as well as rare on-location production photos. We learn about the evolution of the movie's title, the history of 3D (which goes back to the earliest days of film), and Ryan's screen persona, and get some insights into the turmoil gripping the movie industry during the early 1950s.

Isolated Score Track - Those who appreciate Paul Sawtell's dramatic score can enjoy it here without any dialogue interruptions.