“The film shows a refinement and development of recurrent Allen themes, particularly in the characterisation of what is arguably his most complex female character to date…Where the film gains considerable momentum and richness is in the marvelous performances: Rowlands’ perfectly pitched approach to a demanding role is particularly stunning.”
– Time Out London

Woody Allen’s sensitive drama, Another Woman (1988), focuses on a college professor, Marion (the sublime Gena Rowlands), approaching fifty and beginning to question the long-held assumptions of her life.  Hoping to finish a book, she rents a room which turns out to sit next to a psychiatrist’s office; the confessions Marion overhears soon become more fascinating than her work, and drive her to further thoughts, dreams, and reflections about her own existence. The formidable supporting cast includes Gene Hackman, Mia Farrow, Ian Holm, Blythe Danner, Martha Plimpton, John Houseman, Betty Buckley, and Sandy Dennis.

Woody Allen's distinctive voice comes through loud and clear in all of his films. He also has created a number of multi-dimensional female characters who brim with complexity and depth. Most of the time, the two are mutually exclusive, but in the thoughtful and affecting Another Woman, Allen's voice emanates directly from one of those compelling female characters. It's a bold and risky choice, but as usual, the acclaimed writer-director pulls it off.

Marion Post (Gena Rowlands) is a self-assured, intellectual, and well-respected philosophy professor who sublets a studio apartment as an office so she can immerse herself in writing a book. Though she seems happy with her marriage to a cardiologist (Ian Holm) and enjoys counseling her teenage stepdaughter (Martha Plimpton), a bit of ennui and restlessness afflicts the fiftysomething Marion, who feels strangely empty and detached from life's passions. It's not a midlife crisis per se, but when she begins to overhear the anguished confessions of a troubled pregnant woman (Mia Farrow) through the air vents that connect her flat to that of a psychiatrist, she begins to reflect on her own existence and the choices and attitudes that have shaped it over the years. Though the woman is a stranger, Marion feels an intense kinship with her and becomes instantly intrigued by her raw emotion and wise insights.

The serial eavesdropping leads Marion to embark on a personal odyssey, during which she evaluates her troubled relationships and learns about herself through her own wistful memories and the astute perceptions of others, who bluntly point out her faults and frailties. Self-deception, repression, and isolation are prominent themes, and the parallels Marion draws between herself and the troubled, haunting "other woman" allow her to gain a fresh perspective and stitch together the pieces of a splintered life.

There's not much plot in Another Woman. Instead of a linear story, Allen seamlessly connects a series of seemingly disjointed episodes spanning past, present, and fantasy. The older Marion often appears in her own flashbacks as she tries to get to the core of unresolved issues and relationships, and a lengthy dream sequence explores her deep-seeded longings and frustrations. Such a structure often makes Another Woman resemble a stage play in the way it delicately highlights various intimate moments and explores the recesses of Marion's psyche through the people she has known throughout her life. Yet Allen, much to his credit, makes it all very cinematic in a somber, understated manner, often weaving a hypnotic spell, but the meandering narrative might alienate those expecting more incisive drama. Like most of Allen's films, Another Woman improves with subsequent viewings when we can focus on the nuances and subtext that fuel it.

The picture oten evokes Ingmar Bergman's Wild Strawberries, which covers similar ground (albeit with a male main character), but Allen is careful not to blatantly copy the work of his idol. The great filmmakers can salute a style or tone of another, but still make it their own, and Allen does this quite well here. He's aided by former Bergman cinematographer Sven Nykvist and one of the strongest ensemble casts he's ever assembled. Though many of the actors have small parts, they seize the material and make indelible impressions. Gene Hackman as Marion's former lover and Sandy Dennis as a resentful childhood friend contribute terrific work, but Farrow, Holm, Blythe Danner, Betty Buckley, John Houseman (in his final film role), and David Ogden Stiers file fine performances, too.

But it's Rowlands who carries Another Woman and helps loft it above some of Allen's other dramas. Few actresses are so magnetic, and her mellifluous voice beautifully enhances the dialogue and narration, lending it a lyrical quality it might otherwise have lacked. Rowlands is an intuitive performer, and her muted, introspective portrayal grows more resonant as the movie progresses. It's hard to be completely natural in a Woody Allen film, but Rowlands comes close to achieving that elusive goal with a simplicity and grace that's beautiful to behold. It's a shame she has never appeared in another Allen film. Hopefully, one day, she will.

At a mere 81 minutes, Another Woman is little more than a snapshot of a life at a crossroads, but it's intelligent, relatable (especially for those of us of a certain age), and full of meaning. There aren't any comedic scenes and there's much internal soul-searching, but unlike Interiors, it's a hopeful film that helps us come to terms with the choices, accomplishments, and regrets in our own lives and feel good about what lies ahead. 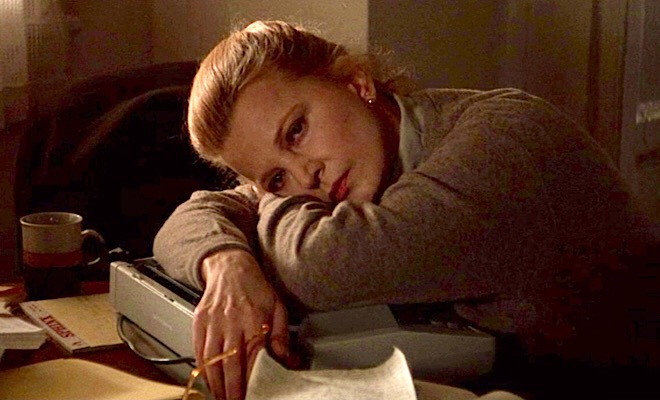 Another Woman arrives on Blu-ray in a limited to 3,000 edition packaged in a standard case. An eight-page booklet featuring an essay by writer Julie Kirgo, three full-color scene stills, and a reproduction of the movie's poster art is tucked inside the front cover. Video codec is 1080p/AVC MPEG-4 and audio is DTS-HD Master Audio 1.0. Once the disc is inserted into the player, the static menu without music immediately pops up; no previews or promos precede it.

The warm glow of introspection and nostalgia distinguish the lush visuals of Another Woman, and Twilight Time's top-notch 1080p/AVC MPEG-4 transfer beautifully renders them. The unobtrusive yet perfectly pitched cinematography of Sven Nykvist, who also shot Allen's Crimes and Misdemeanors, New York Stories, and Celebrity, as well as several notable films by Ingmar Bergman (chief among them Fanny and Alexander and Cries and Whispers, both of which earned him Academy Awards), exudes an iridescence and depth that draws us into the lives of the characters. Excellent clarity and contrast serve the New York exteriors and intimate interiors well, while light grain adds appropriate texture and projects a cozy film-like feel. Colors are vivid, black levels are rich, and close-ups nicely showcase fine facial details. No crush or banding is evident, and no nicks, marks, or scratches mar the pristine source material. Much like other Woody Allen transfers from Twilight Time, this one is a stellar effort that faithfully honors the director's artistry.

As I have written several times in previous HDD Woody Allen Blu-ray reviews, audio doesn't particularly interest the writer-director, so the soundtracks of most of his films remain rather flat. That's true of Another Woman as well, and while the DTS-HD Master Audio 1.0 track supplies clear, well-modulated sound, there's not a whole lot going on from an aural perspective. This is a quiet, subtle film, and all the delicate nuances - especially the muffled conversations coming through the air vent - are clear and distinct. A wide dynamic scale showcases the variances in the music selections - which range from classical to old-time standards - without a hint of distortion, and excellent fidelity and tonal depth enhance their impact. All the dialogue is easy to comprehend, and no hiss, pops, or crackles break the tale's spell. This track has literally no bells and whistles, but its understated nature complements the movie well.

Typical of Woody Allen Blu-ray releases, almost no extras are included on the disc.

Isolated Music Track - Allen always compiles interesting musical soundtracks from a variety of eclectic sources, and this isolated track allows us to fully appreciate all the selections.

Theatrical Trailer (HD, 90 seconds) - The film's original preview highlights some of the film's wittier lines in an attempt to mask the story's serious aspects.

Another Woman is another probing character study from writer-director Woody Allen that explores the doubts, regrets, conflicts, and fears that haunt and needle us as we navigate middle age. With perception and insight, Allen chronicles one woman's journey and how the troubled life of another enlightens and changes her. Gena Rowlands is brilliant as the soul-searching heroine, and a typically excellent supporting cast adds vital nuances to this introspective tale. Though extras are slim, strong video and audio transfers nicely distinguish Twilight Time's limited edition Blu-ray presentation. Another Woman may not be one of Allen's more recognizable titles, but it's a worthwhile, layered, and resonant film that deserves to be rediscovered. Recommended.