How to Steal a Million

“Returns William Wyler to the enchanting province of Roman Holiday. Lensed in Paris, advantageous use is made of the actual story locale to give unusual visual interest.”
– Variety

“Cheers all around for everybody – for Miss Hepburn, Mr. O'Toole, Mr. Griffith, Eli Wallach, and for the scriptwriter, Harry Kurnitz (who is known fondly as Harry Koverr) and especially for William Wyler, who directed with humor and style.”
– Bosley Crowther, The New York Times

Audrey Hepburn and Peter O’Toole star in the effervescent comedy caper, How to Steal a Million (1966), directed by the great William Wyler. Hepburn’s the daughter of a master art forger (Hugh Griffith), who enlists O’Toole’s dapper society burglar to purloin a fake Cellini Venus before it can get Dad in trouble: madcap shenanigans ensue. Shot in a shimmeringly beautiful Paris by Charles Lang, and featuring a lively score from the one and only John Williams, available on this Twilight Time release as an isolated track.

It may not be Ocean's Eleven or even The Thomas Crown Affair, but William Wyler's How to Steal a Million serves up a slick, romantic heist that's easy to digest and lovely to look at. Paris provides the intoxicating backdrop, and Audrey Hepburn and Peter O'Toole supply glamour and sex appeal. Although a thin story and talky screenplay often stall the film's engine, this frothy comedic caper runs quite smoothly on star power alone. With Hepburn modeling a chic array of Givenchy fashions and O'Toole flashing his cool baby blues, How to Steal a Million favors style over substance at every turn.

And there's nothing at all wrong with that. While far from one of Wyler's masterpieces — and he directed quite a few, including Ben-Hur and The Best Years of Our Lives (both of which earned him Academy Awards) — the breezy nature of How to Steal a Million makes it a refreshing departure for all involved, including the audience. There are far more painful ways to spend two hours than in the company of Hepburn and O'Toole, and though their talent consistently eclipses their material, somehow it doesn't matter. They seem to be having a ball, and as a result, so do we. Call me shallow, but I find it rather soothing to kick back and watch two gorgeous people romp around The City of Light trying to pull off a seemingly impossible bit of thievery while falling in love along the way.

Hugh Griffith portrays Charles Bonnet (rhymes with Monet), an expert art forger who's amassed an enviable collection of classic fakes. His daughter Nicole (Hepburn) gently disapproves of his trade, but becomes concerned when Charles, amid great fanfare, lends his prized "Cellini" statue to a Paris museum. Charles basks in the attention, but Nicole's worries escalate when she learns the statue's insurance contract requires a certificate of authenticity. Fearing her father's ruin, a frantic Nicole enlists the services of suave cat burglar Simon Dermott (O'Toole) to help her steal the Cellini before it can be tested. The museum's state-of-the-art security system stands in their way, but Simon hatches a low-tech plan that's so ingenious, it just might work.

Had Wyler made How to Steal a Million a few years earlier, he probably would have cast Cary Grant as Simon, but O'Toole proves he can be equally charming and debonair. After such serious films as Lawrence of Arabia, Becket, and Lord Jim, O'Toole seems to enjoy the flirtatious repartee of light romantic comedy, and the genre agrees with him. He and Hepburn create instant chemistry, an essential building block for this type of film, and a lengthy, somewhat racy sequence in a cramped closet exploits it to perfection.

Draped in the finest haute couture (with jewels by Cartier to boot), Hepburn looks lovely throughout and imbues her performance with typical spirit and sparkle. In her first movie since the stressful My Fair Lady, Hepburn looks utterly at ease, and it's fun to see her play a contemporary, slightly mod character with a madcap streak, much like the screwy socialites another Hepburn named Katherine immortalized a generation before. Whether she's rebuffing the attentions of eccentric millionaire Davis Leland (Eli Wallach), arriving at The Ritz in a frilly pink nightgown, or masquerading as a scrubwoman, Hepburn brightens each scene with her beauty and grace.

How to Steal a Million may not be a practical primer on the fine art of stealing art, but it's a pleasant, often stylish entertainment, marked by engaging performances and fluid direction from one of Hollywood's oldest master craftsmen. And although this star vehicle isn't quite a Rolls Royce, it reminds us just how powerful sheer personality can be. 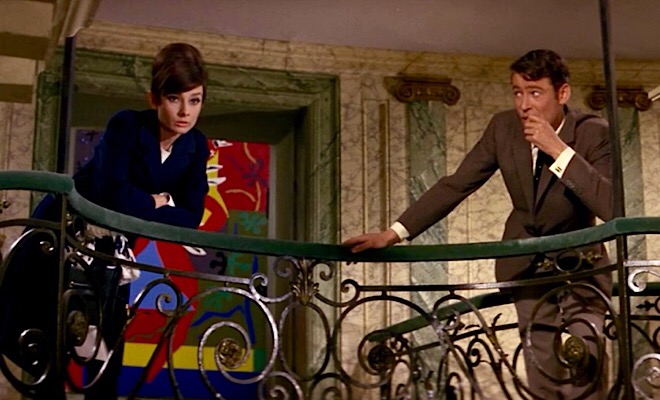 How to Steal a Million arrives on Blu-ray in a limited to 3,000 edition packaged in a standard case. An eight-page booklet featuring an essay by writer Julie Kirgo, full-color scene stills, and a reproduction of the movie's poster art is tucked inside the front cover. Video codec is 1080p/AVC MPEG-4 and default audio is DTS-HD Master Audio 2.0. Once the disc is inserted into the player, the static menu without music immediately pops up; no previews or promos precede it.

The previous DVD featured a glorious transfer, but this 1080p/AVC MPEG-4 rendering - also courtesy of Fox - ups the ante considerably. From the moment the crisp opening titles hit the screen against a backdrop of masterpiece paintings by the likes of Van Gogh, Picasso, and other iconic artists, it's instantly apparent we're in for a visual treat.  Most of the time, just like Hepburn's Cartier diamond jewelry, the image sparkles with crystal clarity and excellent contrast. The ornate interiors of the Bonnet house exude an amazing level of detail, and the Paris exteriors are so vibrant and distinct, we feel as if we're on location with the characters. Black levels are rich, flesh tones are natural and stable, and beautifully saturated hues belie the single-strip color technology the movie employs. Primaries and pastels pop with equal intensity (the red velvet walls in the opening auction house sequence are especially bold and lush), and superior shadow delineation keeps crush at bay. Close-ups are razor sharp and nary a speck or scratch sullies the pristine print. As a result, Hepburn, in all her Givenchy splendor, radiates glamour, and Paris doesn’t look too shabby either.

Unfortunately, a few scenes appear noticeably soft and a tad grainy, almost as if they were extracted from a different source, but thankfully such instances are brief and only minimally detract from this sublime visual presentation. How to Steal a Million looks like a million, and fans who own the 2004 DVD shouldn't think twice about investing in this stellar upgrade.

Like the previous DVD, both stereo and mono tracks are included, and the DTS-HD Master Audio 2.0 and 1.0 tracks supply full-bodied if unspectacular sound. Dialogue remains clear and comprehendible throughout, and no age-related surface defects, such as hiss, pops, or crackles, are present. Stereo separation is limited at best, but subtleties like crowd noise add a touch of realistic ambience, and potent effects like the blaring museum alarm easily fill the room. The snappy score by a fellow named Johnny Williams, enjoys solid fidelity, but doesn't project the same robust majesty as the music he penned for Star Wars, Raiders of the Lost Ark, and Jurassic Park, after he shortened his name to John. The elegance, however, is all Williams, and the score greatly enhances the film's light-hearted mood. A wide dynamic scale handles all of its highs and lows, and no distortion muddies this nicely balanced mix.

A couple of interesting extras, both of which are ported over from the 2004 Fox Studio Classics DVD, flesh out the disc.

Audio Commentary - Because a frothy film like How to Steal a Million requires little analysis, the separately recorded remarks by actor Eli Wallach and Catherine Wyler, the director's daughter, aren't very scene specific. The pair often struggles to sustain the track, but spice up their comments with several noteworthy nuggets. Wallach speaks sparingly, but offers especially insightful observations on the art of acting and subtle adjustments performers must make for various mediums. Wyler dominates the track, and understandably focuses on her father, relaying biographical information, pointing out trademark "Wyler touches," and discussing his directorial style and high regard for Audrey Hepburn (by far his favorite actor, she says). She also gives us a peek inside the Wyler family and their Hollywood home life when she was a child.

Documentary: "Audrey Hepburn: The Fairest Lady" (HD, 45 minutes) - This 1997 installment of the popular Biography TV series beautifully captures the actress's ethereal essence. Charting her career "from international superstar to world class humanitarian," the program chronicles Hepburn's war-torn childhood, intense desire to become a ballerina, and how "she became an actress by accident." It also addresses her 15-year marriage to actor Mel Ferrer, her struggles to have children, and her quiet yet intense dedication to UNICEF. Plenty of engaging clips from her best-loved films, a rare 1953 screen test, and interviews with Blake Edwards, Harry Belafonte, Roddy McDowell, Richard Dreyfuss, and son Sean Ferrer complement this well-done portrait.

Isolated Music Track - This early score by renowned Academy Award-winning composer John Williams (billed here as "Johnny") can be enjoyed without dialogue or effects on this isolated track.

Theatrical Trailer (HD, 3 minutes) - The film's original theatrical trailer, which is in pretty rough shape, completes the extras package. Unfortunately, a teaser and two rare black-and-white TV spots that appeared on the previous DVD are not included here.

The beauty of How to Steal a Million may only be skin deep, but the charming Audrey Hepburn, debonair Peter O'Toole, chic Paris locations, and art treasures galore are enough to make this delightful caper a satisfying, if not wholly successful, diversion. A luscious video transfer, solid audio, and an excellent Hepburn documentary add luster to this limited edition Twilight Time disc. Recommended.