Texan farmers the Frake family head for the Texas State Fair in Dallas. The parents are focused on winning the competitions for livestock and cooking. However, their restless daughter Margy and her brother Wayne meet attractive new love interests.

When Hollywood latches onto a good thing, it's loath to let it go. Take State Fair. Philip Stong's heartwarming novel about a midwestern family's annual pilgrimage to their state exposition was first adapted for the screen in 1933 and starred Will Rogers and Janet Gaynor. Its unqualified success inspired composers Richard Rodgers and Oscar Hammerstein to transform the material into a captivating 1945 musical that featured such catchy, lilting standards as It Might as Well Be Spring, It's a Grand Night for Singing, and the rousing title tune. 20th Century-Fox should have left well enough alone, but 17 years later, the studio couldn't resist recycling the property yet again, and banked on an array of up-and-coming young stars like Pat Boone, Bobby Darin, Pamela Tiffin, and a sexy, red-headed dynamo named Ann-Margret to breathe new life into the antiquated tale. Though by this time Hammerstein had passed away, Rodgers penned a few new songs on his own, and director José Ferrer took the production to the California countryside to give it a more authentic feel.

Yet despite these smart updates, it's painfully apparent three times for State Fair is one time too many. Its array of attractive personalities notwithstanding, the 1962 version never gains sufficient steam and - to quote a popular song of the day - "stays too long at the fair." Ferrer's film is pleasant enough, lovely to look at, and chock full of old-fashioned morality, but there's not enough substance to sustain it. Running 20 minutes longer than the 1945 version (for no good reason), the movie feels labored and bloated, as if the creative team is trying to morph this simple, intimate story into a lavish production on a par with some of Rodgers and Hammerstein's splashier musicals. But hard as it tries to be Oklahoma!, State Fair remains mired in that iconic show's elephantine shadow. The action limps along, some of the schtick seems forced, and most of the musical numbers are statically staged, resulting in a bland movie that sadly lacks the zip of the spiked mincemeat matriarch Melissa Frake (Alice Faye) enters in the fair's food competition.

That mincemeat, along with the beloved hog of her husband Abel (Tom Ewell) and son Wayne's dreams of driving his sporty red roadster to victory in the big race, propels the Frake family to travel to the Texas State Fair with high hopes of winning coveted blue ribbons. Once they arrive, though, Wayne (Boone) becomes infatuated with a sexy, somewhat loose showgirl (Ann-Margret), while his naïve sister Margy (Tiffin) tries to fight off the advances of local TV reporter - and smooth operator - Jerry Dundee (Darin), who's on the prowl for a casual hook-up. Their patient parents offer evenhanded advice, but will Wayne and Margy make the right decisions? And will Melissa's mincemeat and Abel's ornery pig wow the judges?

Movies like State Fair depend on the likability of their characters and vitality of their musical numbers to overcome their thin plots and maintain audience involvement. Though Boone, Darin, Tiffin, and Ann-Margret are "likable enough" (to borrow a quip Barack Obama made to Hillary Clinton in 2008), the roles they play are devoid of dimension and the songs they sing - with the exception of Ann-Margret's electrifying Never Say No to a Man, which features a provocative dance sequence - often lack pizzazz. Ferrer had previously directed a handful of films (most recently the Peyton Place sequel), but State Fair was his first (and only) musical - and would turn out to be his final directorial effort - and it's obvious from the get-go he really doesn't have a feel for the genre.

This version is certainly sexier than the previous incarnations - Boone's shirtless love scene with a wanton Ann-Margret fairly sizzles - but mild titillation only goes so far and can't quite vanquish the material's overbearing wholesomeness. The actors try their best - it's especially nice to see Alice Faye back in front of the cameras after a 17-year hiatus, and Boone files an earnest, winning portrayal - but sometimes it seems like they're trying too hard. That's certainly true of Ann-Margret, but her undeniable energy masks her rough edges and makes her the film's focal point. She always grabs attention whenever she's on screen, and the movie drags whenever she's not.

If you haven't seen the other versions of State Fair, this one might strike your fancy, but it pales significantly when compared to its older cousins. On its own, it's a sweet, colorful family musical that features several fine tunes and a stellar cast, but it's hardly memorable. The 1945 version is far better, so if you crave a Rodgers and Hammerstein fix, seek that one out first. 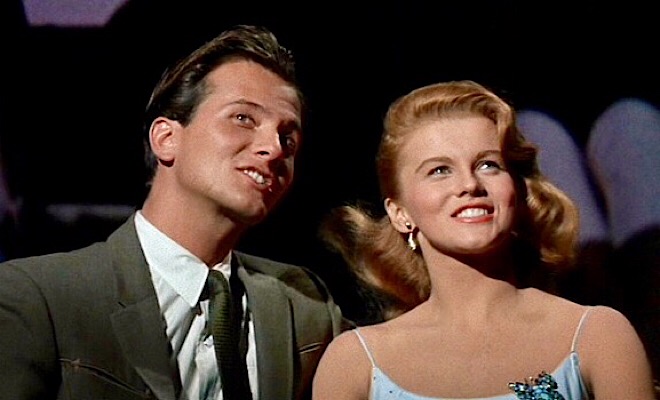 The 1962 version of State Fair arrives on Blu-ray in a limited to 3,000 edition packaged in a standard case. An eight-page booklet featuring an essay by film historian Julie Kirgo, full-color scene stills, and a reproduction of the movie's poster art is tucked inside the front cover. Video codec is 1080p/AVC MPEG-4 and default audio is DTS-HD Master Audio 4.0. Once the disc is inserted into the player, the static menu without music immediately pops up; no previews or promos precede it.

The 1080p/AVC MPEG-4 transfer from Twilight Time (care of Fox) doesn't quite exude the luster of some of the studio's other classic efforts, but it nevertheless enjoys many fine moments. Though grain is noticeable, especially during the film's first half, it rarely distracts from the on-screen action, and colors run the gamut from gorgeously lush to flat and faded. Wayne's red sports car lights up the frame, but many of the exterior shots appear a tad dull. Black levels are rich, whites are bright, checkered patterns are rock solid, and flesh tones remain natural and stable throughout. Close-ups are nicely detailed, showcasing the fresh faces of the younger stars, background details are easy to discern, and excellent shadow delineation keeps crush at bay. Some jarring print damage, however, occasionally intrudes. Marks, scratches and vertical lines don't show up often, but when they do, they grab attention, and that's a shame. All in all, this is a pleasing transfer, but the source material shows its age a bit more than other Twilight Time releases from the same period.

Two soundtracks are included on the disc - a DTS-HD Master Audio 4.0 track and a DTS-HD Master Audio 2.0 track. Both tracks are surprisingly similar and provide pleasant listening experiences. The default 4.0 track benefits from superior fidelity and solid modulation. Noticeable stereo separation across the front channels widens the soundscape and helps open up the film, while an expansive dynamic scale handles all the highs and lows of Alfred Newman's lush and rousing orchestrations without any distortion. (Ann-Margret's solo number sounds especially robust.) All the vocals are well prioritized, all the dialogue and song lyrics are clear and easy to comprehend, and no age-related hiss, pops, or crackles intrude. Musicals demand high-quality audio, and Twilight Time delivers not one, but two excellent tracks that beautifully showcase Rodgers and Hammerstein's score.

All of the supplements from the 2005 DVD (except - sadly - a clip of Mary Martin singing It Might as Well be Spring from a 1954 Rodgers & Hammerstein TV tribute) have been ported over to this Blu-ray release.

Audio Commentary - The mellifluous tones of actor Pat Boone grace this yawner of a commentary that suffers from a dearth of insight and too much dead air. Lengthy gaps abound and are bookended by Boone's good-natured remarks and fond memories, but substance is sorely lacking. Boone sees "a Tom Cruise quality" in his portrayal, and admits he "was trying to be the singing Mr. America" during his film career. He praises Bobby Darin and Ann-Margret, as well as his other cast mates, and lauds José Ferrer's direction. He also wishes more family-oriented musicals would be produced today. Fans of Boone will certainly enjoy hearing his recollections, but there just aren't enough of them to flesh out and improve what is sadly a very lackluster track.

Featurette: "From Page to Screen to Stage" (HD, 30 minutes) - This breezy 2005 piece looks at all the various forms State Fair has adopted over the years - the original novel, the 1933 non-musical version starring Will Rogers and Janet Gaynor, the 1945 musical adaptation with Jeanne Crain and Dana Andrews, the 1962 musical remake, and the 1990s stage version - and examines their similarities and differences. In addition, we gain some insight into the working method of Rodgers and Hammerstein, and learn about the background of such figures as director Walter Lang, actress Jeanne Crain, and singer Dick Haymes. (Note: This featurette is also included on the disc that contains the 1945 version of State Fair, which is part of the multi-disc Rodgers & Hammerstein Collection.)

Vintage TV Pilot (HD, 50 minutes) - A few years after the demise of the short-lived dramatic TV series based on Rodgers & Hammerstein's The King and I, one of the networks decided to take a stab at State Fair. This 1976 pilot, which promotes staunch family values and flaunts a sincere, homespun tone reminiscent of The Waltons, never evolved into a full-fledged series, but features a solid cast led by Vera Miles and including Mitch Vogel, Julie Cobb, and a young Linda Purl.

Theatrical Trailers (HD, 5 minutes) - Two original previews are included on the disc. The first touts the film's array of young stars ("Pat Boone like you've never seen him before!"), while the second focuses more on Rodgers & Hammerstein and the movie's music.

The third go-around for State Fair is sadly the weakest, and though the 1962 version of Rodgers and Hammerstein's musical jumpstarts the time-honored tale with more sex appeal and a couple of new songs, the modern tweaks can't quite salvage it. Pat Boone, Bobby Darin, Pamela Tiffin, and especially Ann-Margret give it their all, but even their youthful exuberance fails to sufficiently energize the far-too-simple story of a rural family's whimsical and romantic adventures at the Texas State Fair. Twilight Time's Blu-ray presentation features solid video and audio transfers and a decent selection of supplements, but this limited edition release is purely for fans only.