The Fate of the Furious

After seven movies spanning over fifteen years and the tragic loss of one its central stars, it's only natural to expect The Fast & Furious franchise to be chugging along on nothing but fumes or at least, being pushed off the side of the road by its designers. But as The Fate of the Furious demonstrates, the fuel running this engine is far from spent and there is still plenty more to burn in the tank. Admittedly, much like the characters in each movie, the filmmakers are good at renovating a familiar body (formula) while detailing it with the same theme of family. Dom (Vin Diesel reprising the role he's arguably best known for) and his crew are caught in another espionage conspiracy involving a highly-talented criminal that only they can defeat because of some casual plot convenience. But as every entry in the series continues to prove, the creators top each successive installment by upping the danger and drama to absurdly over-the-top heights. And in this eighth episode to the massively popular action series about cars and outlaws, the crew garishly and proudly revs a new souped-up engine with a fresh tank of NOS for an extra boost of silly melodramatic fun.

The script by Chris Morgan, who's been penning each story since Tokyo Drift, opens only a short time after the events of the previous film in Cuba where Dom and Letty (Michelle Rodriguez) are honeymooning and doing what they do best. A drag race through the streets of Havana serves little purpose than to remind viewers that our hero remains the best driver in the world while putting audiences in the proper mindset for enjoying the high-performance vehicular onslaught about to erupt for the next couple hours. And director F. Gary Gray (Straight Outta Compton), taking the wheel after James Wan and Justin Lin, does splendidly driving this production around tight corners and avoiding obstacles, demonstrating he's the right person for the job and making the preposterously comical nonsense as equally laughable as it is mesmerizingly exciting. And it's a good thing he does in these opening moments because the silliness quickly ratchets up another notch when Charlize Theron shows up as cyberterrorist Cipher, sporting bleach-blonde dreadlocks and ensnaring Dom into her elaborate evil plan that would put Ultron to shame. In fact, I would even go a step further and point out Cipher makes a better malevolent foil for the Avengers than James Spader. 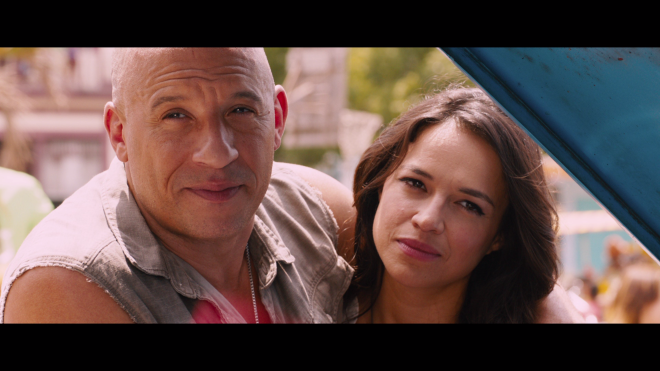 What she has on Dom — what convinces him to turn against the love of his life and his family — is made a mystery that further fuels a production already jam-packed with so many visual goodies. Nonsensically daft and eye-rolling bad as it is — but will not be spoiled here nonetheless — the twist is rather entertaining. In the franchise's own logic and mythology, the whole entangled mess weirdly makes sense. And the filmmakers use it to their advantage for establishing this entry's central emotional core. In one very brief conversation, Letty brings up the next step in the couple's marriage. In the states, agent Luke Hobbs (Dwayne Johnson) is rediscovering his true passion in life when fearlessly annoyed by his superior interrupting him while coaching his daughter's championship soccer game. Mr. Nobody (Kurt Russell) also returns to chase after Dom and Cipher with the added responsibility of playing a tough father figure to Little Nobody (Scott Eastwood). All the while, Chris "Ludacris" Bridges and Tyrese Gibson continue to compete for the affections of hacktivist Ramsey (Nathalie Emmanuel), as in the hopes of making a family of their own.

In the end, what really makes The Fate of the Furious such a surprising, check-your-brain-at-the-door delight — other than the exhilarating and outrageous action, that is — is how the filmmakers link all five previous stories into a larger cohesive whole, allowing Gray and Morgan to finally and unapologetically embrace the franchise for what it truly is. The Furious series is ultimately a daytime melodrama that just happens to feature a well-choreographed demolition derby that plays like a symphony of grinding metal and thunderous explosions. And like any good televised drama, betrayals are in abundance, there is a fair amount of infighting for keeping tensions high and characters suddenly return from the dead (No, I'm not referring to Walker). It would seem the weight of all that is carried on the shoulders of Jason Statham's Deckard Shaw and his dear old mum. But before things go a bit too wacky and histrionically dull, Gray injects the seriousness with plenty of laughs and a zaniness that keeps the action light even at its most absurdly spectacular, making this entry surprisingly fun with very obvious hints of yet another installment already in the works.

Universal Studios Home Entertainment brings The Fate of the Furious to Blu-ray as a two-disc combo pack with an UltraViolet Digital Copy code. Incredibly enough, when I redeemed said code via UPHE.com and VUDU, it included SD, HDX (1080p), and UHD with Dolby Vision for both the Theatrical Cut and Extended Director's Cut, which adds another 13 minutes to the runtime and is only available as a digital copy. However, there is no guarantee it will work with every code redeemed. At this time, I have not had the opportunity to watch and compare the difference between the two versions. Housed inside a blue, eco-elite keepcase with a glossy, lightly embossed slipcover, the Region Free, BD50 disc sits comfortably opposite a DVD-9 copy of the film. At startup, viewers can skip various trailers before being greeted by the standard menu screen with the usual options, full-motion clips and music.

The eighth installment in the massively popular franchise thunders onto Blu-ray, packing a smashing, reference-quality 1080p/AVC MPEG-4 encode beneath the hood. The engine driving this vehicular onslaught is muscled by some cool tricked out features. Shot with a trio of cameras that range in resolution quality, the freshly-minted transfer shows razor-sharp details in the various cars, the buildings of several locales and the inside of Cipher's plane. The lettering in signs, windows and cars are distinct and intelligible, even as the camera zooms by, and the smallest object in the distance is plainly visible at all times. More astute viewers can even make out the most negligible imperfection in the vehicles, and fragments from collisions and rowdy wreckage remains extraordinarily detailed during the most vulgar of action sequences. The faces of the entire cast reveal pores and blemishes while maintaining healthy, lifelike complexions.

Presented in a 2.39:1 aspect ratio, the presentation also rides with spot-on contrast, giving the metal edges of the cars a nice sparkle when driving through the streets of a sunny New York City. From beginning to end, the video displays brilliantly crisp, crunchy whites, from the clothing and computer screens to the snow of the Russian Arctic, keeping all the action sharp and punchy. Except for a couple, minor scenes that appear a bit flat and somewhat murky, inky-rich black levels deliver deep, penetrating shadows that never engulf the finer details, providing the image with an appreciable three-dimensional quality and a beautiful cinematic appeal. The cinematography is marvelously colorful, showing an intentionally garish array of full-bodied primaries and accurate, cleanly-rendered secondary hues, especially those scenes set in Cuba and New York.

Engines roar with intimidating fierceness and cars careen in every direction in this exciting, highly-satisfying DTS:X soundtrack that'll give your sound system a great workout.

From the opening drag race sequence, listeners are welcomed to this world of muscle cars, double-crosses and espionage outlaws as Dom races through the streets of Havana in a fiery blaze. With superb balance and separation, vehicles fluidly speed between all three front channels, noises convincingly move in the background and engines echo across the entire screen. Much of that activity also spreads into the front heights, generating an awesomely engaging half-dome wall of sound. The surrounds and back speakers are also often employed, expanding the over-the-top insanity into the entire room and plunging the viewers right smack in the middle of the action. Sometimes, cars fly through the air and a helicopter towards the end circles a trapped Dom, utilizing the overheads with excellent effectiveness.

Through all the vehicular carnage and destructive mayhem, the mid-range remains crystal clear with superb distinction and clarity between the various noises, providing the crunch and grind of metal against metal with astounding precision. Every conversation and interaction is discreet and unmistakable, never overwhelmed by the ear-piercing loudness of the rest of the action. The low-end also packs a terrific wallop in every crash and explosion while also providing a weighty rumbling boom to the rev of engines, giving each of them a cool realistic feel. Best of all, for those with the subwoofers that can handle it, the sound design comes with a pair of separate bass sweeps that reach as low as 22Hz and nicely give the room a hardy shake (bass chart).

Audio Commentary: Director F. Gary Gray drives solo on this decently interesting commentary track where the filmmaker addresses many of the challenges, his thinking process when shooting some of the craziest action and share his thoughts on character motivation, which, at times, comes off more like narration.

The Cuban Spirit (HD, 8 min): After a brief intro by Michelle Rodriguez, the piece take viewers on a tour of Havana, featuring cast & crew interviews and tons of BTS footage of some of the camerawork.

Car Culture (HD): Three-part piece on the various cars and their importance to the characters and plot.

All about the Stunts (HD): Another three-piece featurette looking at the practical effects and stunt work.

The Streets of New York (5 min)

In spite of expecting the franchise to be running on fumes by now, The Fate of the Furious demonstrates the fuel running this engine is far from spent and there is still plenty more to burn in the tank. Sporting a familiar plot, the eight installment of the massively popular franchise roars onto the screen souped-up with even more melodramatic silliness and vehicular carnage, but director F. Gary Gray drives this vehicle with a NOS tank filled with fun, action-packed excitement and loads of humor, keeping things light and entertaining. The Blu-ray arrives with a gorgeous, reference-quality video presentation and an awesomely satisfying DTS:X soundtrack. The supplements are a bit light and short for a box-office hit such as this, but the overall package is well worth the admission for this wild ride around the world.

Sale Price 9.97
List Price 14.98
Buy Now
3rd Party 24.9
In Stock.
See what people are saying about this story or others
See Comments in Forum
Previous Next
Pre-Orders
Tomorrow's latest releases