In the mid-1980s, the streets of Compton, California, were some of the most dangerous in the country. When five young men translated their experiences growing up into brutally honest music that rebelled against abusive authority, they gave an explosive voice to a silenced generation. Following the meteoric rise and fall of N.W.A., Straight Outta Compton tells the story of how these youngsters revolutionized music and pop culture forever the moment they told the world the truth about life in the hood and ignited a cultural war.

There's a pivotal moment in 'Straight Outta Compton,' a rousing and terrifically engaging bio-drama inspired by the rise and fall of the notorious hip-hop group N.W.A., when the plot's central theme comes into clear focus. About halfway into the film, Andre "Dr. Dre" Young, played by the talented Corey Hawkins, receives news of his younger brother's death at the hands of another youth, while Dre and fellow "reality" rappers are touring the country promoting their debut album. In an effort to comfort their friend, O'Shea "Ice Cube" Jackson (O'Shea Jackson, Jr. in an uncanny portrayal as a younger version of his father) and Eric "Eazy-E" Wright (Jason Mitchell in a poignant, standout performance) begin sharing stories of personal loss. It's a moving scene not only meant to reflect on the problematic violence plaguing inner-city life, but also one revealing that in spite of the hardened criminal personas created by the group's name and their brash, aggressively defiant music, the three remain young men deeply affected by the harsh, unforgiving reality of a city they call home.

The scene is doubly significant in making clear the three characters as the principal figures in this tale although other members MC Ren (Aldis Hodge), DJ Yella (Neil Brown, Jr.) and The D.O.C. (Marlon Yates Jr.) still play minor roles in the group's history. More importantly, the touching exchange between friends reveals what is ultimately at stake in telling the story of a musical group that instantly ignited controversy with their debut album and drew the attention of the U.S. government with their hit single "F**k tha Police." Their music and style were deemed offensive by the mainstream public because of the language and their seemingly hostile, antagonistic personalities. But this brief exchange lets slip their humanity. Their words and tears expose anxious boys hiding beneath those stage personas created as part of their performance — insecure, fearful, and vulnerable young men troubled by a reality that seems to haunt them, live with them and is a part of them even from thousands of miles away. It's the scene that perfectly encapsulates the plot's overall central theme and tells audiences this is more than a simple adaptation of real-life events. 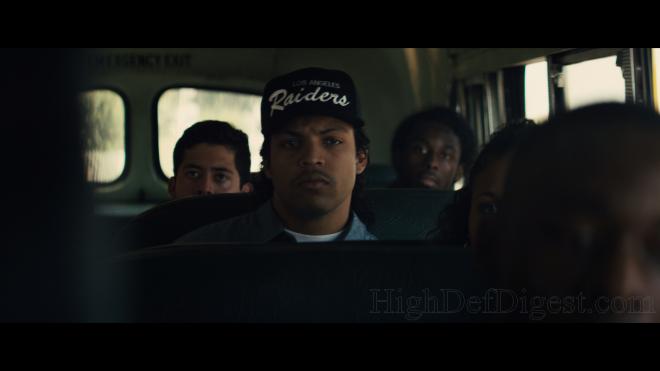 The raw abrasiveness of their songs, which were largely produced by Dr. Dre, and explicit lyrics, many of which were written by Ice Cube, spoke to a loftier truth that director F. Gary Gray ('Friday,' 'The Italian Job') manages to powerfully communicate in this one scene. The angry, militant energy in their music articulated their frustration and rage against an apathetic society that treated them as lesser citizens and much less even bothered to acknowledge their plight. In many respects, their songs were passionate outcries speaking against not only the violence within their community but also against those meant to protect them from the violence. And it's a type of violence that follows them everywhere they go. Even when achieving success or the fabled "American Dream," such as when they are on tour, they are reminded of their "blackness," but one that is very narrow and limits much of what they are allowed to do, such as being granted the freedom to perform as they wish in a Detroit concert. Their music turned a spotlight on a terrible truth they saw as an unfortunate normal part of their lives, a type of violence they could never completely escape.

The violence depicted in 'Straight Outta Compton' does not come only from those using it as means to parade physical strength and power over another — the way Suge Knight (R. Marcos Taylor) blurs the line of record producer of Death Row Records and criminal organization and the treatment of African-Americans at the hands of police officers. But there is also the type that's more Machiavellian and takes advantage of a group of young men naïve and ignorant of the music business — Paul Giamatti is excellent as the scrupulous Jerry Heller, doing an amazing job as a sympathetic father figure who hides his true intentions incredibly well. From a script by Andrea Berloff ('World Trade Center') and Jonathan Herman, the bio-drama tends to feel a bit bloated in a couple spots trying to cover several events, especially when clocking in at 167 minutes. But Gray successfully keeps the focus on how those events motivated the music and how the music of these young men, of speaking brazenly of a truth they lived, impacted and revolutionized hip hop forever.

Universal Studios Home Entertainment brings 'Straight Outta Compton' to Blu-ray as a two-disc combo pack with an UltraViolet Digital Copy code. Housed inside a blue, eco-elite keepcase with a glossy, lightly embossed slipcover, the Region Free, BD50 disc sits comfortably opposite a DVD-9 copy of the film. The Blu-ray includes the 167-minute theatrical version along with an unrated director's cut that clocks in at 187 minutes, adding 20 minutes of dialogue, character development and entirely new sequences not seen in theaters. At startup, viewers can skip various trailers before being greeted by the standard menu screen with the usual options, full-motion clips and music.

The explosive biopic debuts on Blu-ray with a fantastic, near-reference quality 1080p/AVC MPEG-4 encode that's a faithful representation of the filmmakers' creative intentions.

Shot entirely on the Red Epic camera system, the digital-to-digital transfer displays lots of warm colors to reflect the hot and sunny Southern California climate. Cinematographer Matthew Libatique ('Noah,' 'Black Swan,' ' Cowboys & Aliens') skews the palette towards yellow-amber hues, yet skin tones remain accurate and healthy throughout. Primaries are not affected in the least, as blues and greens still shine through with brilliance.

Contrast also appears to be slightly on the lower end, which again is part of the overall design, but whites remain spot-on with extraordinary clarity and visibility in the distance during many of the extreme wide shots. Black levels are punchy and inky, giving the 2.40:1 image an appreciable cinematic appeal. Although definition is somewhat affected by the deliberate visual style, the presentation nonetheless shows razor-sharp detailing in much of the clothing, the furniture inside the recording studios and the city streets. In close-ups, facial complexions are revealing with several lifelike moments.

'Straight Outta Compton' slams down some reality with an impressive and highly engaging DTS-HD Master Audio soundtrack that'll feel like a party broke out in the living room.

Being a character-driven drama, much of the action understandably takes place in the front soundstage, which explodes from the opening moments with a wall of sound that's overwhelming. Imaging is broad and expansive with excellent channel separation, as all sorts of noise move across the screen with convincing off-screen directionality. The presentation maintains distinct clarity in the mid-range, exhibiting a wide, dynamic sense of presence and delivering room-penetrating details in the higher frequencies, and the low-end is responsive and commanding with a hard-hitting and robust punch when certain scenes demand it. Concert sequences are brash and energetic with a wealth activity engaging the entire soundfield, making the listener feel as though surrounded by cheering fans. The rears are also occasionally employed by minor ambient effects during many exterior shots, but they are quite subtle and sadly happen more sporadically. With excellent, precise dialogue in the center, the lossless mix is sure to please fans everywhere.

Based on the rise and fall of infamous hip-hop group N.W.A., 'Straight Outta Compton' is a rousing and terrifically engaging bio-drama that centers around the close friendship of the three primary members: Eazy-E, Dr. Dre and Ice Cube. Directed by F. Gary Gray, the film is an outstanding portrait of the band's history, challenges and motivations. The Blu-ray arrives with excellent picture quality and excitingly upbeat audio presentation. With a decent collection of supplements, the overall package is highly recommended for fans of N.W.A. and recommended for the curious.

Sale Price 15.75
Buy Now
3rd Party 11.75
In Stock.
See what people are saying about this story or others
See Comments in Forum
Previous Next
Pre-Orders
Tomorrow's latest releases